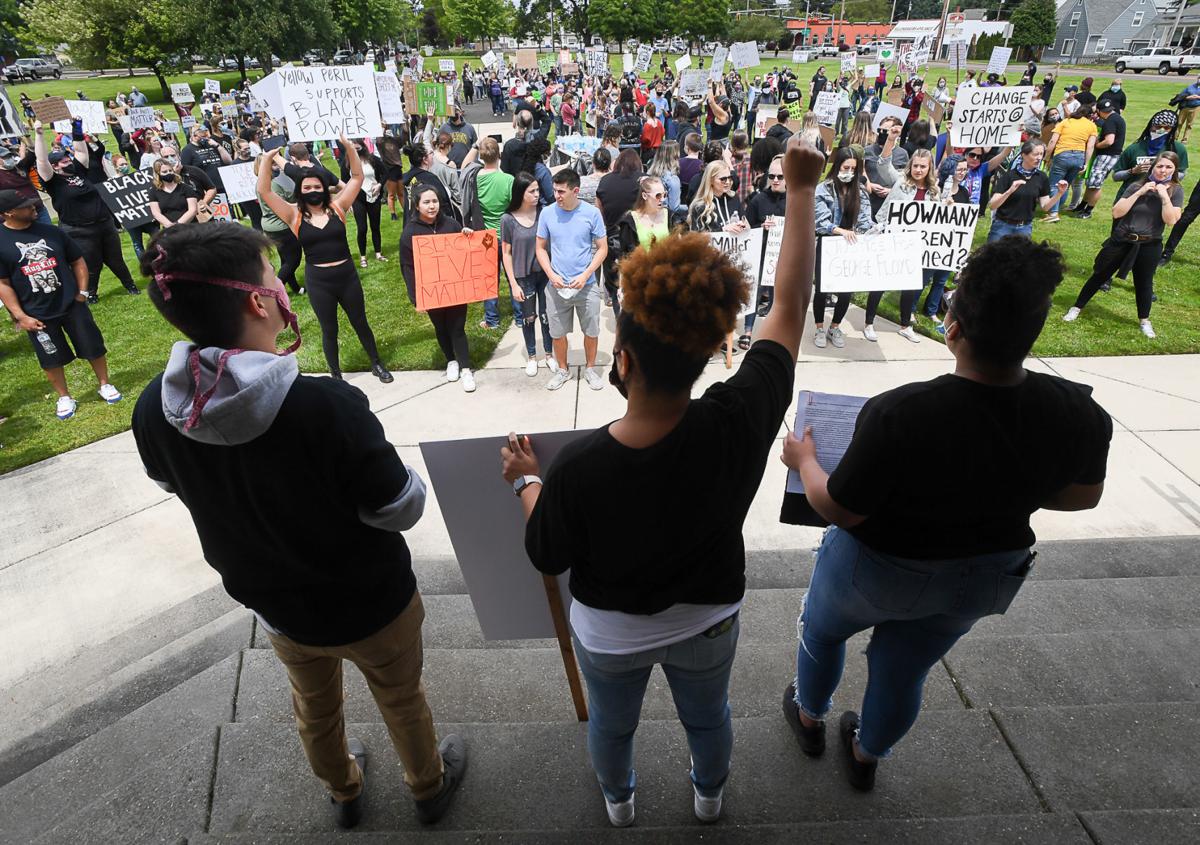 Protest organizers from left, Jack Baur, Micah-Lyn Borden and Jesseca Wolter greet several hundred protesters as they arrived at the gazebo in Academy Square in Lebanon after marching from Century Park Sunday afternoon. 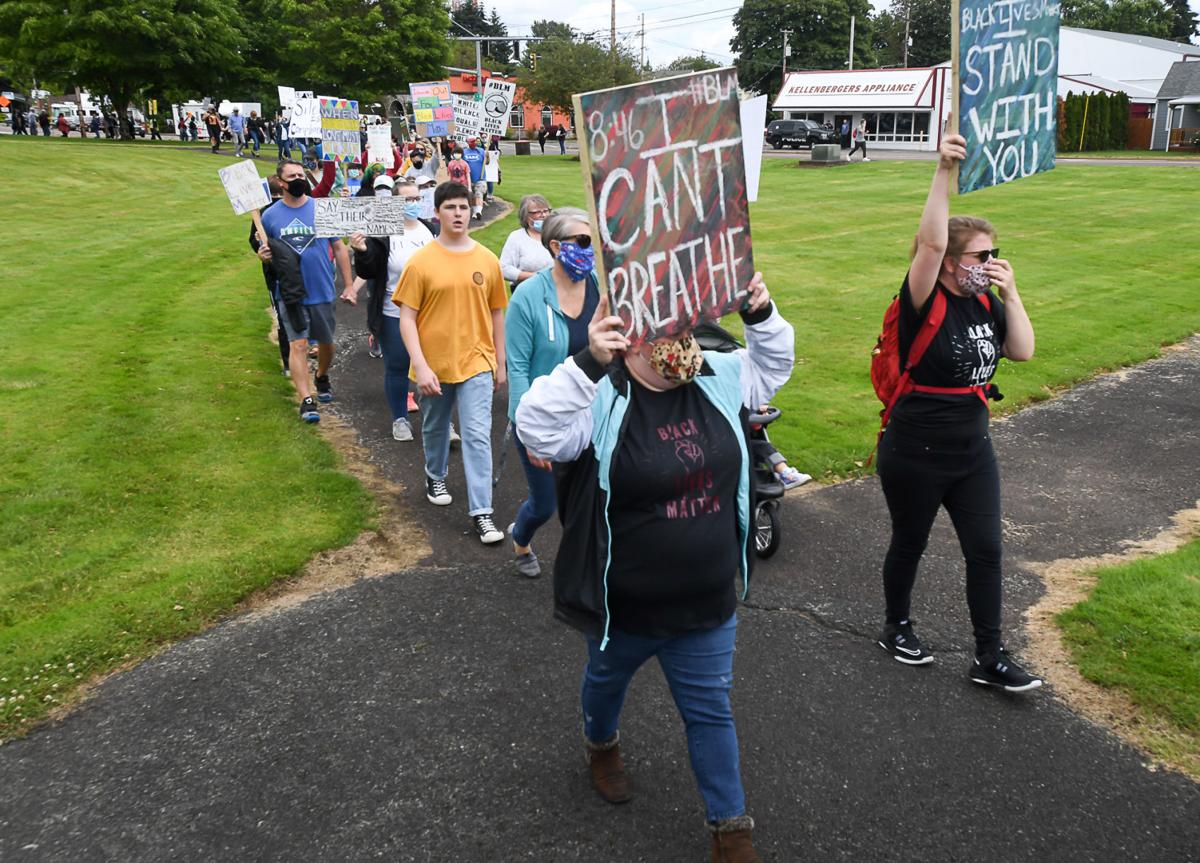 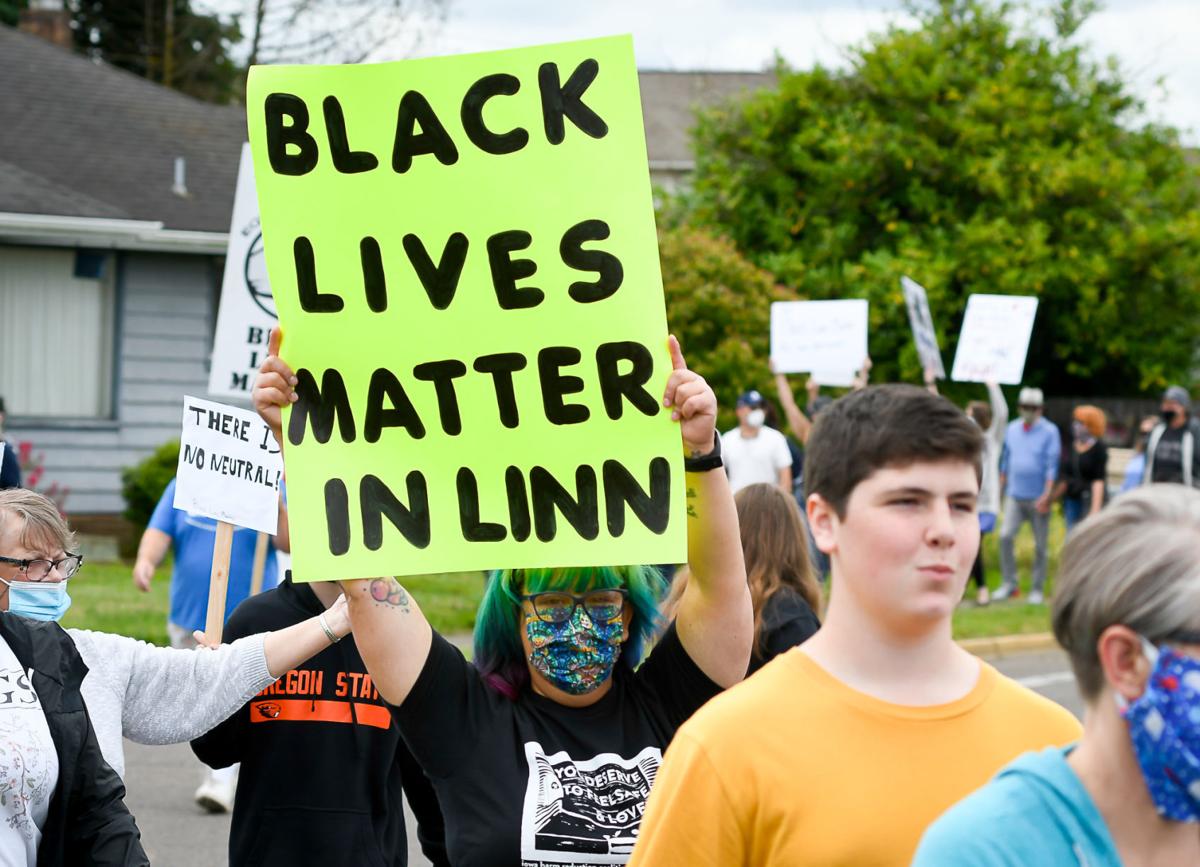 Blue Valentine of Albany displays a sign as she marched from Century Park in Lebanon to the gazebo at Academy Square Sunday afternoon. 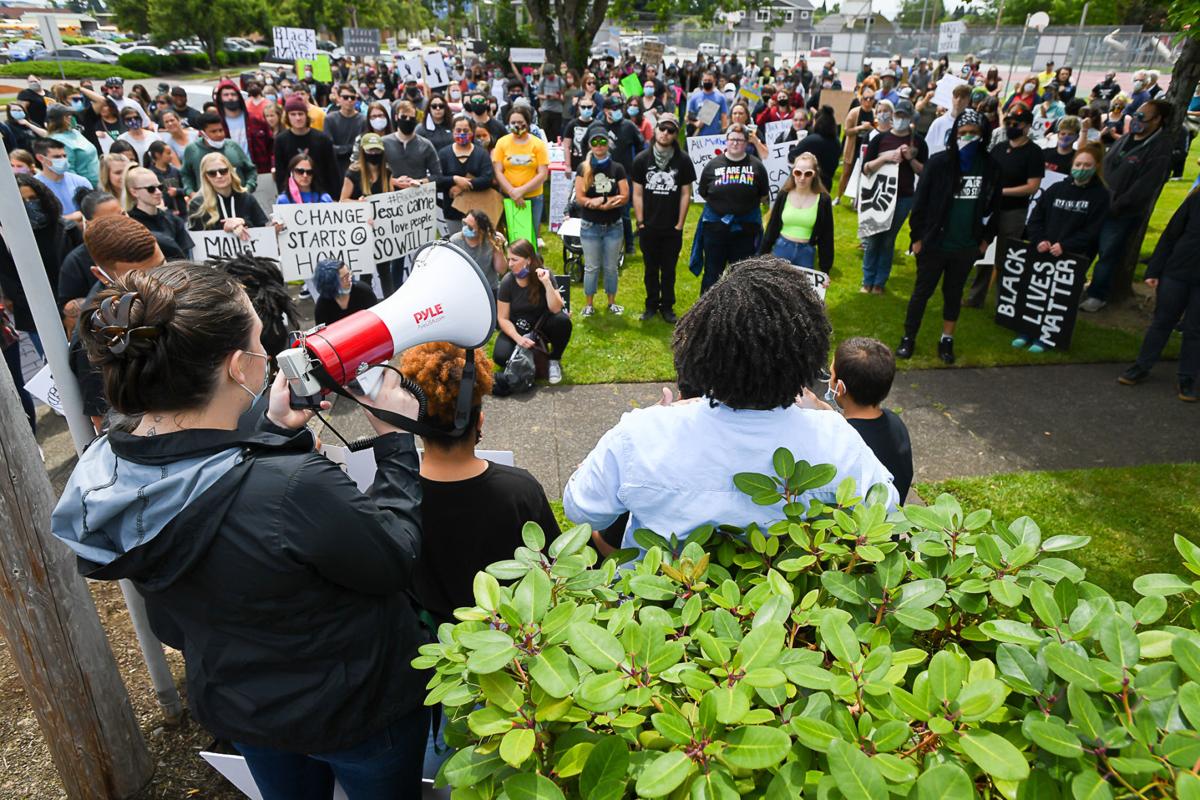 Karissa Doyle gives last-minute instructions to several hundred protesters at Century Park in Lebanon on Sunday afternoon as they prepared to march to the Gazebo at Academy Square. 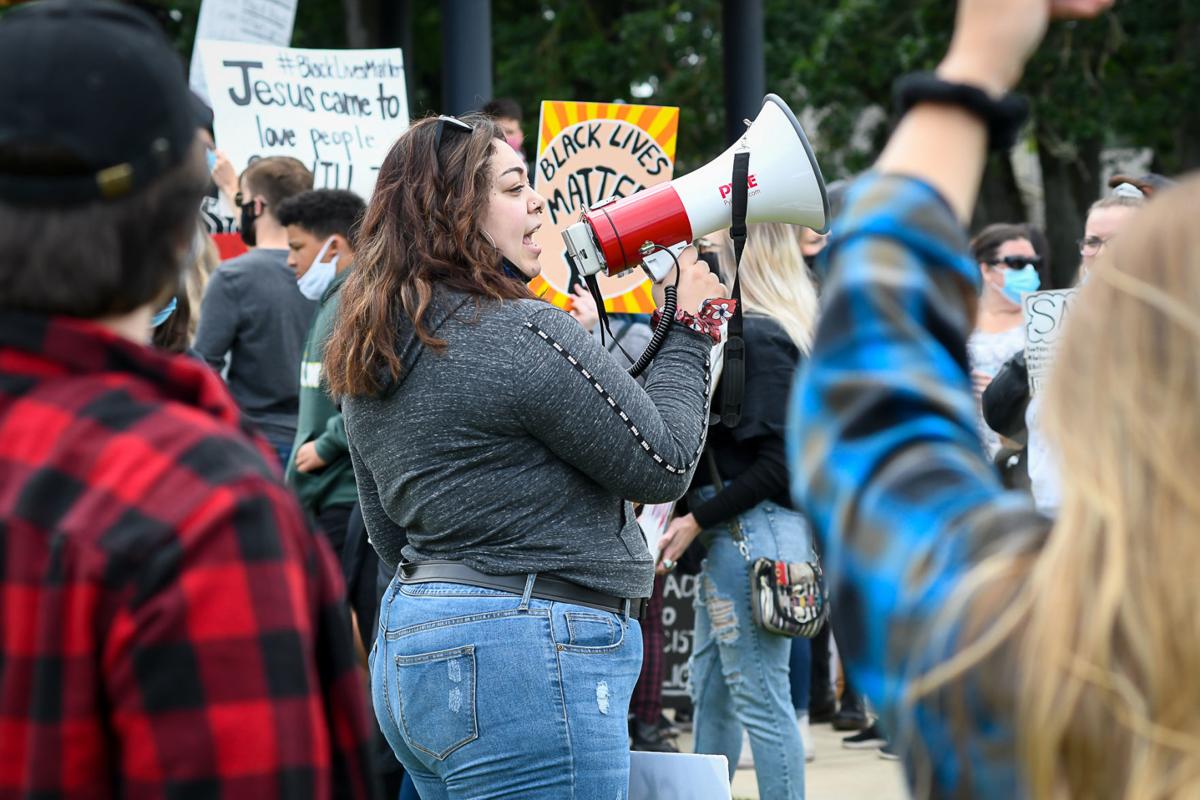 Lucy Barbosa of Lebanon leads the the protesters in a chant as they arrived at the Gazebo in Academy Square on Sunday.

The small mid-valley town is no stranger to the nationwide resurgence of Black Lives Matter protests following the May 25 death of George Floyd at the hands of Minneapolis police officers.

Wolter, joined by fellow Lebanon residents Micah-Lyn Borden, Jack Bauer, Karissa Doyle and Elati Bourgeois, arranged a march from Century Park to Academy Square on Sunday to give their community’s voices a chance to join the call for racial justice.

“Our town has profound roots in systemic and institutionalized racism,” Doyle said. “I will never understand the turmoil of being in (a black person’s) skin.”

Doyle, who is white, criticized non-black people — including herself — for “having their eyes open but not seeing and listening but never hearing” when it comes to racial equality.

Borden said the police in town haven’t had a track record of brutality that she knows of, but she’s still concerned that “no one’s brought attention to racism here.” She wants her young black son to be safe and be able to trust the police when he grows up.

It’s reasons like that, Doyle said, that make staying neutral during this civil rights movement is akin to having a leaky roof but not fixing it just because the water isn’t dripping directly onto you.

The protest drew a crowd in excess of 300 people. At the Academy Square gazebo, numerous speakers took the stage to share their experiences with or as people of color.

Lebanon police officers, assisted by some Albany officers, escorted the marchers and monitored the perimeter of the gazebo during the peaceful protest.

“We’re taught from a very young age that black lives do not matter,” said speaker Kira Johnson. “We see innocent black folks murdered in the streets,” while white rapists — Brock Turner, Johnson’s example — pass through the justice system and get treated better for “good behavior.”

“This is something I’ve seen happening a lot,” Bauer said, “just from our lack of diversity.”

Despite having a liberal facade, Bauer said, the Pacific Northwest is no exception to racial injustice. When Oregon reached statehood, there were black exclusionary laws built into its laws. Oregon also had one of the largest per capita Ku Klux Klan membership rates in the early 1900s. This history is one part of the reason Sunday’s protest was necessary, Bauer said.

“It is no longer enough for us to be quietly non-racist. It is time for us to become vocally anti-racist,” Bauer said. “We need to do this to uphold the very motto of this town ‘The City that Friendliness Built.’”

But still, Bauer said, too many people think the Black Lives Matter movement intends to negate the struggles of non-black people — it doesn’t.

In response to naysayers like the ones Bauer called out, Lebanon resident Mary Mitchell brought a sign reading “All Lives Can’t Matter Until Black Lives Matter.”

“Black people are the ones in danger," Mitchell said. “It’s really nice seeing how many people are supportive of this movement … especially in this small community.”

Erique Arriaga, his wife Montoya Dancy and her cousin Merlanda Faoa agreed it was nice to see Lebanon have such an outpouring of support because they’ve felt the insidious presence of racism in the town before.

Faoa, who is black, described the town as unfriendly. She said she’s been stared at in grocery stores and people have gone out of their way to avoid her in public, even before social distancing became the norm.

When he first visited Lebanon, Arriaga, who has Native American ancestry, said the lack of diversity was immediately apparent. Dancy, who is black, agreed.

“I love it, but it always gave me an uneasy vibe,” Arriaga said. “I’ve been to Iraq and (served) overseas, and it’s great over there. But here, you have to watch out.”

Christan Stagg attended the event with her husband, Anthony Mobley, and friends from Portland.

“I’m here to support the people in our community who experience racism and the effects of racism and supremacy directly and systemically,” said Stagg, who has lived in Lebanon for 20 years. “It’s powerful to see support in Lebanon. This community has had a long history with white supremacy and racism, so to see this many people come out to support vulnerable populations … is very powerful.”

Bourgeois was the final speaker at the event and issued a challenge to those in attendance.

“I ask you to advocate, to have conversations with your friends and your family about racism,” she said. “It’s OK to be uncomfortable. Talk about it. Pray about it. Black lives matter.”

Black Lives Matter protesters marched peacefully but purposefully through the streets of Corvallis for a full hour Monday night, calling for a…

'We could do more': Albany law enforcement talks policy

Protest organizers from left, Jack Baur, Micah-Lyn Borden and Jesseca Wolter greet several hundred protesters as they arrived at the gazebo in Academy Square in Lebanon after marching from Century Park Sunday afternoon.

Blue Valentine of Albany displays a sign as she marched from Century Park in Lebanon to the gazebo at Academy Square Sunday afternoon.

Karissa Doyle gives last-minute instructions to several hundred protesters at Century Park in Lebanon on Sunday afternoon as they prepared to march to the Gazebo at Academy Square.

Lucy Barbosa of Lebanon leads the the protesters in a chant as they arrived at the Gazebo in Academy Square on Sunday.