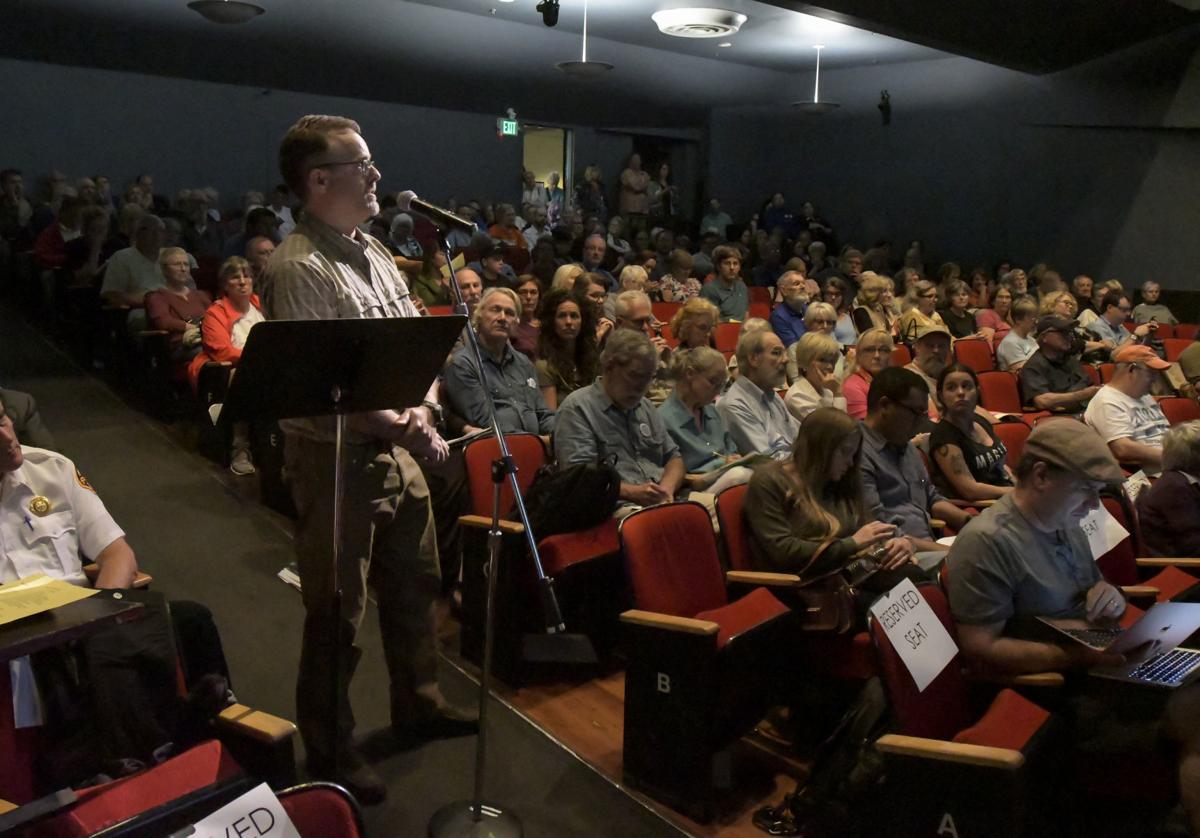 Shawn Collins of the Housing Opportunities Action Council testifies on plans for the location of the men's cold weather shelter during a July, 2018 Corvallis City Council meeting at the Majestic Theatre. Collins' tenure with HOAC ends June 30 as the group transitions to a county advisory committee. 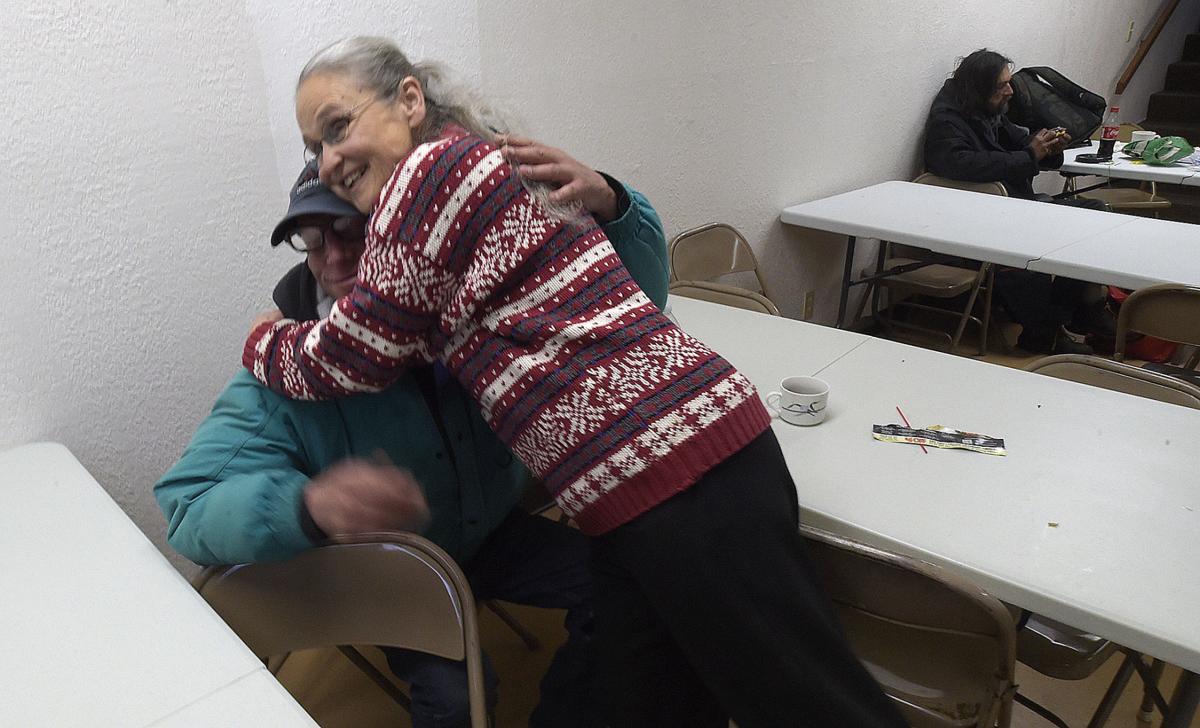 Corvallis Drop-In Center volunteer executive director Aleita Hass-Holcombe hugs Delmar Krebsbach, 58, during a December Gazette-Times visit to the drop-in center's new quarters on Southwest Fourth Street. The center is in a stable position after bouncing around last summer to a series of temporary homes.

The Housing Opportunities Action Council is no more.

The city-county led agency, the second group which has worked on the 10-year plan to address homelessness, went out of business at the end of its May 22 meeting.

HOAC, which replaced the earlier Homeless Oversight Committee, is morphing into a Benton County advisory committee, yet unnamed. A draft intergovernmental agreement and bylaws are in the works, but a date has not been set for the new group's first meeting.

Shawn Collins, the United Way employee and project manager for HOAC, will continue to work on the transition through June 30, when his contract expires.

“My activity between now and then is largely focused on wrapping up and effectively transition (the) website and other resources to the county in anticipation of the to-be-created council,” Collins said.

Collins added that “creating the new group will take some time and likely won’t be complete for several months.” Discussions he has had with Commissioner Xan Augerot and County Administrator Joe Kerby indicate that the county will use its own employees for staff support.

“So, one way or another (barring something surprising), my position is ending,” Collins said. “I’m not planning to walk away from the topics HOAC has been working, but my role may be simply as ‘concerned citizen Shawn.’ ”

Collins added that the “needs haven’t gone away,” a fact that was apparent from the discussions at the council's final meeting.

Along with the needs remaining there also was a residue of distrust and anger concerning the challenges of addressing homelessness while at the same time keeping the city and county livable and harmonious.

Downtown business interests, many of whom expressed strongly worded concerns at a well-attended “downtown safety and livability workshop” on May 13 at the First Christian Church, continued to speak out at the HOAC meeting.

Downtown physical therapist Maggie Cooper said she was “disappointed in the workshop. … There were many good ideas expressed, but it did not address concerns of livability downtown.”

Bob Baird, owner of The Book Bin, again criticized the draft model for the governing structure of the new county agency.

“This new model will fail because it treats business as one voice,” said Baird, who noted the wide range of downtown businesses — retail, restaurants, hospitality and business and professional services.

Baird also reiterated his concern from the workshop that the business community should pick its own representation on the new group “rather than being appointed by some executive committee, which will likely pick someone that doesn’t truly represent downtown and isn’t likely to cause any trouble.”

In a clear signal of how far the community still has to travel to get as much of the community involved in the discussion as possible, Baird noted that the May 13 workshop “was the first time I’ve ever heard of HOAC and these meetings, even though I’m an informed downtown business owner.”

Other concerns expressed at the meeting:

Jennifer Moore, Cascades West Council of Governments: “I’ve been involved since 2007 and … there’s always been a tension between representing the whole county and Corvallis specifically.”

Andrea Myhre, Corvallis Housing First: “I was disappointed in the workshop as well. I wish the workshop had done more to understand what people mean by safety. The conversation was general and never got to deeper issues.”

Aleita Hass Holcombe, Corvallis Daytime Drop-in Center: “I don’t feel that this workshop solved any problem, but it’s a start to get the conversation going.”

Jill McAllister, Unitarian Universalist Fellowship: “We have a culture that is very bureaucratic and doesn’t support bold leadership. In the earlier workshop in September, priorities were identified — safety and livability downtown being one of them — but we’ve only just begun to work on them.”

Julie Manning, Samaritan Health Services: “Many of the concerns raised here are referenced in the 10-year plan. That means we’ve already gone a good distance toward identifying actions we need to take and initiating action. I don’t want to give the impression that we have no plan. Nothing could be further from the truth.”

2007: A steering committee for the Benton County 10-year-plan to address homelessness begins meeting.

Oct. 23, 2009: The plan, called “A Ten-Year Plan to Address Issues Surrounding Housing and Homelessness In Benton County Oregon,” is rolled out. Included is the requirement that an “oversight committee” be formed. See the website for the full 36-page text of the plan.

Jan. 27, 2016: The final meeting of the Homeless Oversight Committee is held as the group morphs into the Housing Opportunities Action Council. The group begins meeting as the HOAC the following month,.

Nov. 1, 2016: Shawn Collins takes the position as project manager for the Housing Opportunities Action Council. Collins, a United Way employee, is paid by the city of Corvallis and Benton County.

Dec. 20, 2017: The HOAC governing board approves a mid-point update of the 10-year plan and releases its 64-page plan, “Community Strategies to Overcome Homelessness and Barriers to Housing.” See the website for the full text.

May 22, 2019: HOAC holds its final meeting as the group morphs again into a Benton County advisory committee. No date has been set for the committee’s first meeting. It has not been named.

Homeless in the Mid-Valley

The city of Corvallis set up its second Corvallis Area Resource Event (CARE) Tuesday at the Corvallis-Benton County Public Library.

The first time the Lebanon Soup Kitchen opened its doors to the public, no one came.

The residents call it Safe Camp because — for the moment, at least — they’re safe from being evicted from their homes.

Homeless board proposals to go to Corvallis council

Efforts to move city and county homeless coordination to a Benton County advisory board are on a path toward approval in the coming weeks.

The new board charged with tackling homelessness in Benton County began its work this week with a round of introductions and a sense of optimism.

Shawn Collins of the Housing Opportunities Action Council testifies on plans for the location of the men's cold weather shelter during a July, 2018 Corvallis City Council meeting at the Majestic Theatre. Collins' tenure with HOAC ends June 30 as the group transitions to a county advisory committee.

Corvallis Drop-In Center volunteer executive director Aleita Hass-Holcombe hugs Delmar Krebsbach, 58, during a December Gazette-Times visit to the drop-in center's new quarters on Southwest Fourth Street. The center is in a stable position after bouncing around last summer to a series of temporary homes.