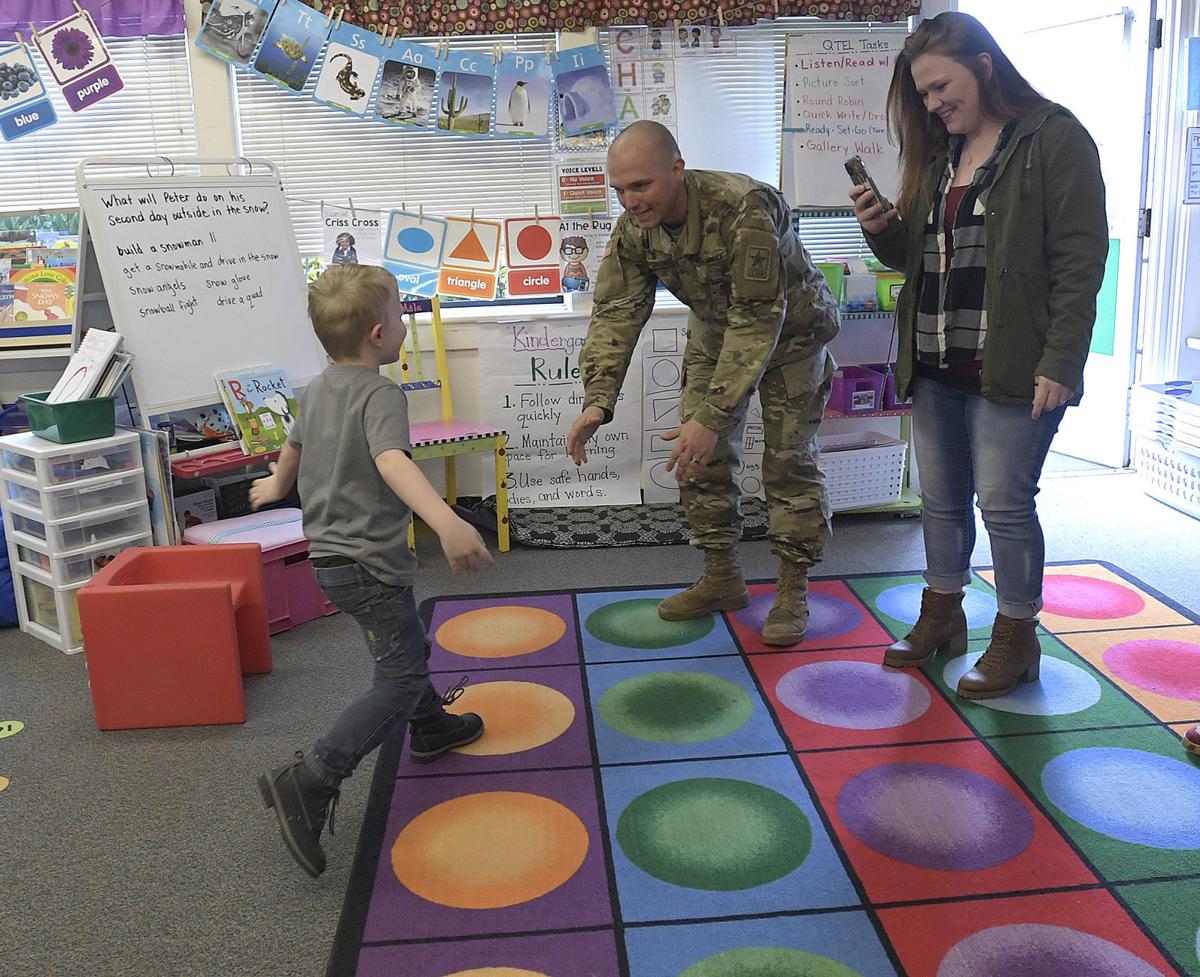 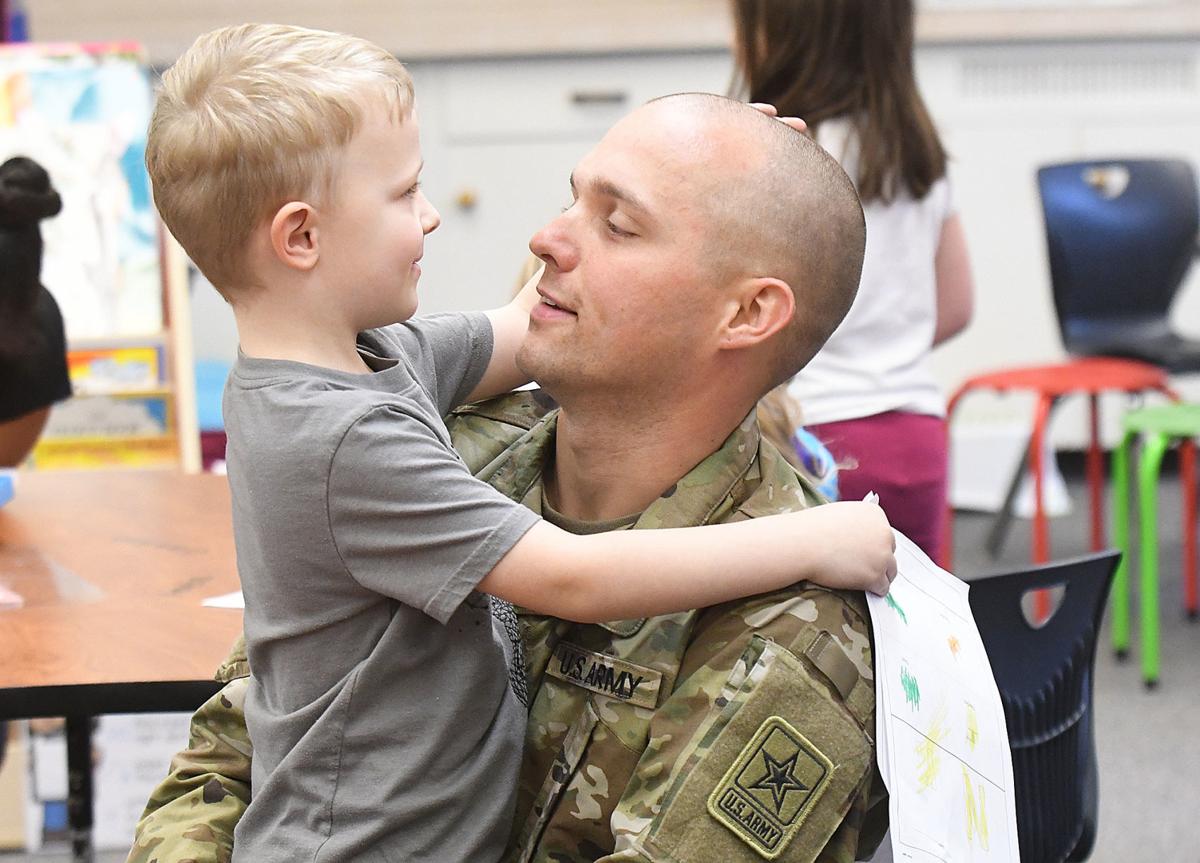 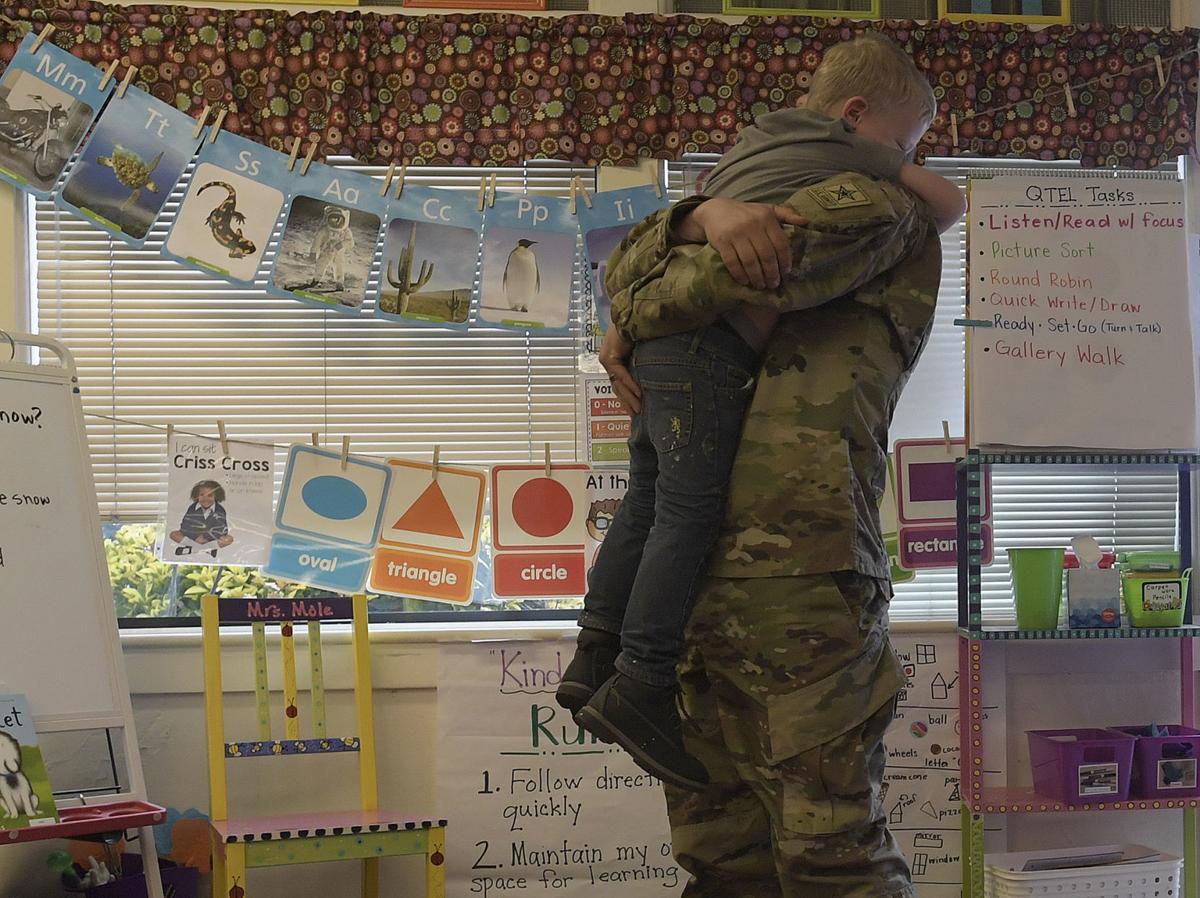 Logan Bedford hugs is father, Mike, after she soldier returned from four months of deployment.

Then, the door opened.

Michael Bedford has been away from home since August, training for his position in the U.S. Army. It's the longest he's ever been away from his family. On Tuesday, they were reunited.

"I missed you daddy," 6-year-old Logan Bedford shouted after gasping at the sight of his father, taking off across the classroom to jump into his arms.

The surprise was coordinated by Logan's mother Audrie, Mole, his teacher and Greater Albany Public Schools.

The only people not in on the plan from the beginning? Michael and Logan.

"I told him when he got off the plane," Audrie said of sharing her plan with her husband.

While the surprise was Audrie's idea, the fanfare surrounding it came from Mole.

GAPS invited local media to document the surprise and explained the cameras by telling students there would be a story about the last few days of school prior to winter break. According to a district spokesperson, the district planned to film the reunion and share it on social media.

The family quickly made their exit, reunited again, but before heading home, Michael noted how happy he was to be back. And he'll remain home for the holidays, according to his wife.

Principal Anne Griffith was also in the classroom for the homecoming.

"It was a wonderful opportunity for this family," she said. "Logan was very surprised."

The stories in this collection look at complicated issues around the mid-valley but shift the focus to organizations, individuals, curriculum and efforts working to find solutions.

Students at Lebanon High School went viral for appearing in a photo wearing black paint on their faces with a racist slur attached to it. The …

Skylar McCollaum wasn’t the next school shooter—but what if he had been? Law enforcement, school administration and family went on the record …

Homelessness is complicated. The city of Albany devised a new strategy this year to try and make it a little easier to find a solution.

Lonely at the top:Organizations work to ease the state's superintendent turnover

The last five years has seen a sharp rise in the number of open superintendent positions. COSA worked to create a program to restock the pipeline.

Story Next Door: A song (and bear) for Christmas

In a second-story classroom at the new Oak Grove Elementary School, long after students have gone home, a group of four girls is busy at work,…

After months of delays and discussions, the Greater Albany Public Schools Board of Directors voted on Monday to move the opening of Meadow Rid…

Power out at Central Elementary School

Hazel Carver grew up in a town at the end of a road that didn’t exist. It hadn’t been built yet.

Dakota Tagen knew exactly when her baby would be born.

Logan Bedford hugs is father, Mike, after she soldier returned from four months of deployment.