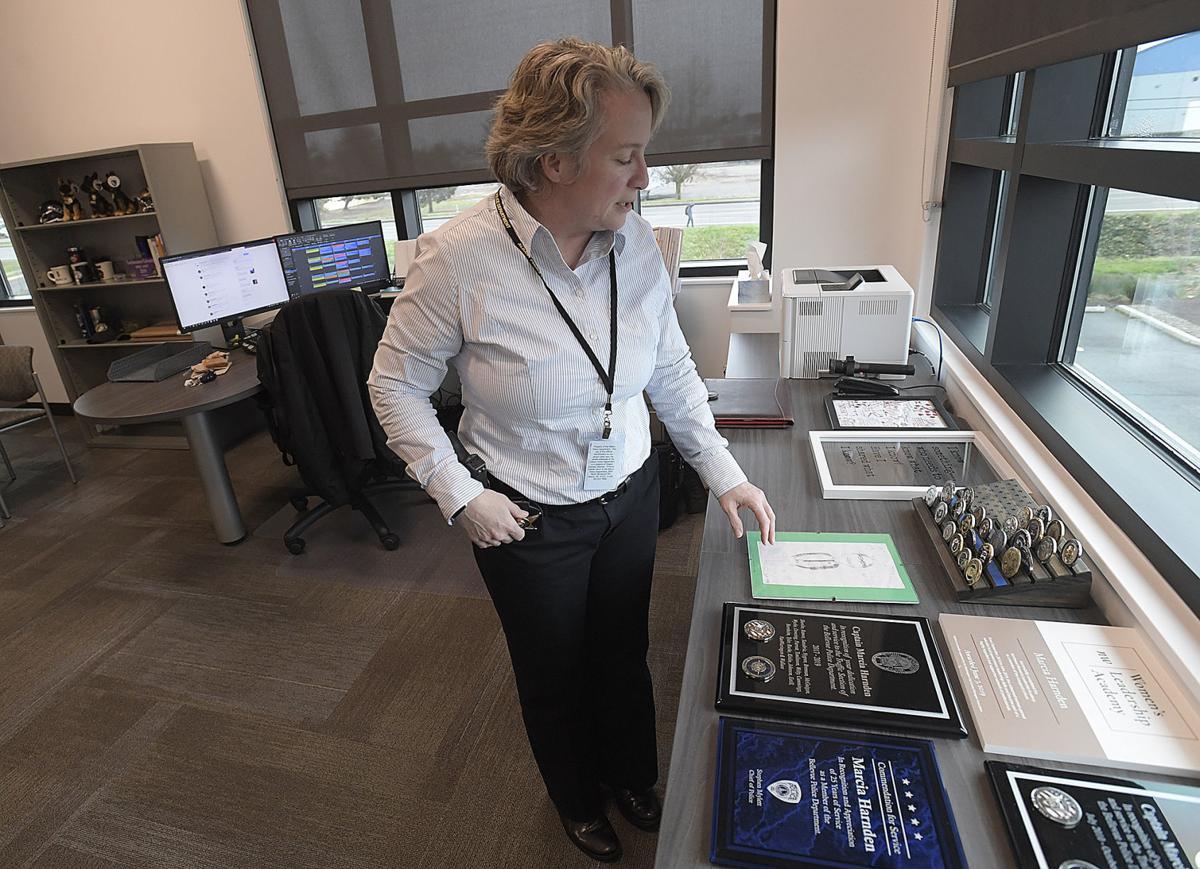 Harnden looks at some of the plaques and awards she's received over her 27-year career, which began at the Bellevue, Washington, police department, where she rose through the ranks from school resource officer to captain. 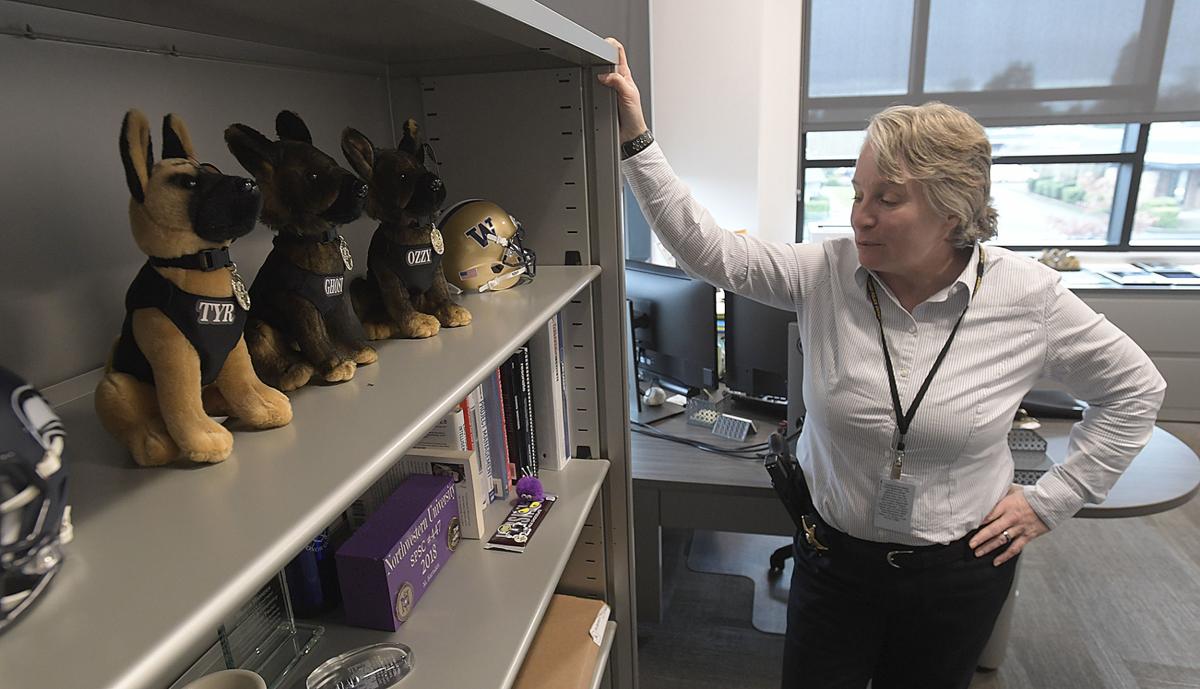 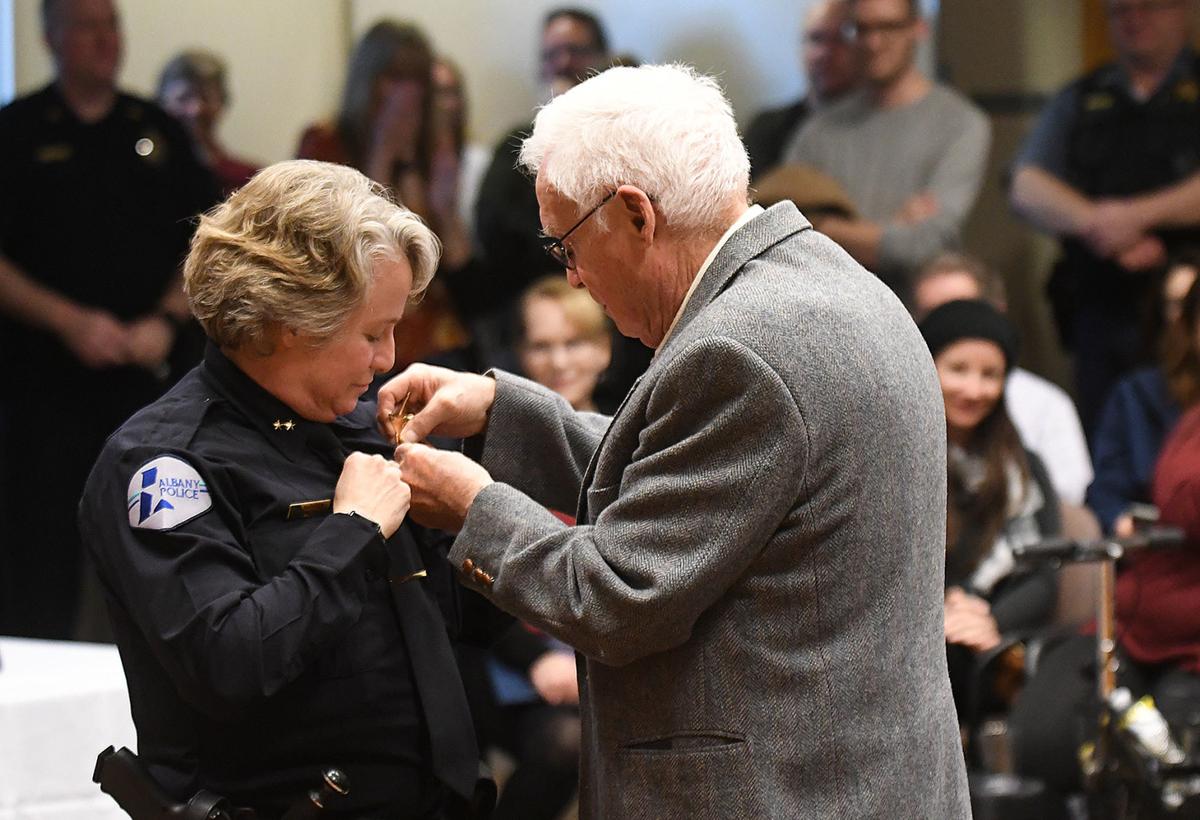 Milt Harnden, right, pins the police chief badge on his daughter Marcia Harnden during a Jan. 31 ceremony in the council chambers of Albany's City Hall. 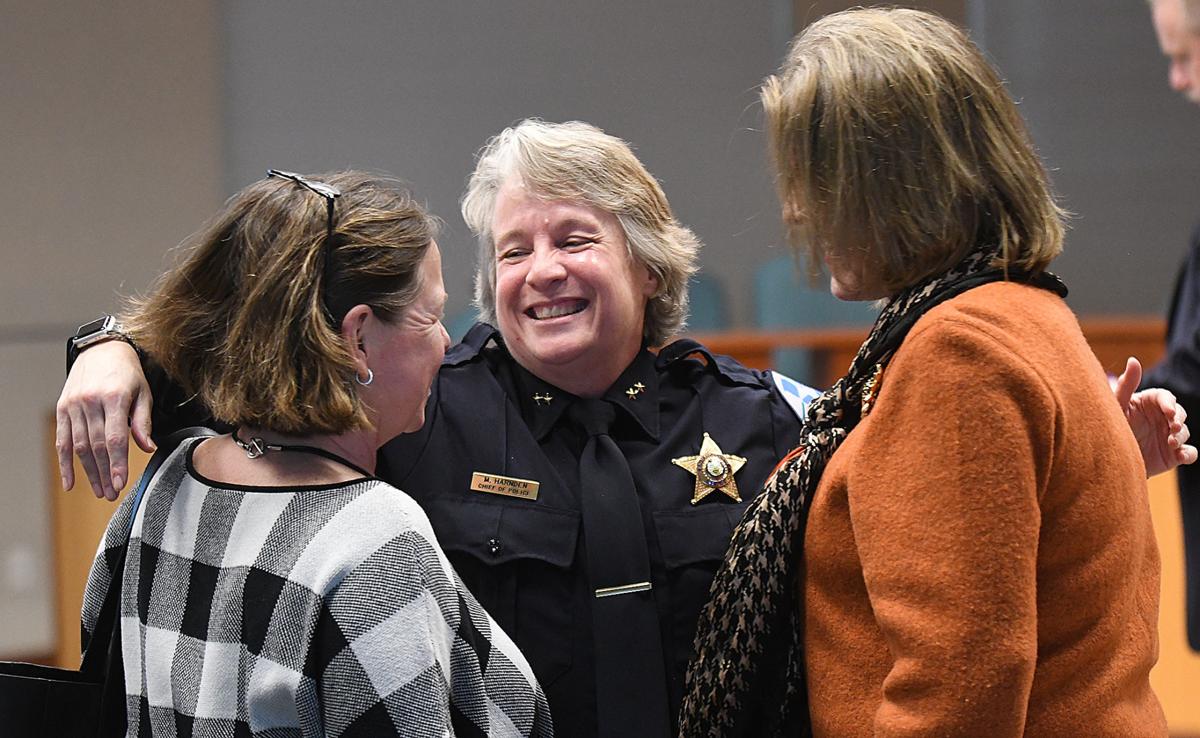 When the Albany Police Department was formed in 1891, it consisted of one man: the marshal. In the 129 years since, it's moved around the city, added scores of officers and established a community policing approach, snagging a national accreditation.

But for all of its progress and stretches toward the future, the city has never had a female police chief.

Some thought the day would never come, that equity equates to politics and that politics have no place in law enforcement. That choosing the right man for the job is more than just a saying. Some assumed it would happen eventually — just not today.

But Harnden — a 27-year veteran of the Bellevue, Washington, Police Department, where she rose through the ranks to become a captain — is certainly no stranger to the Pacific Northwest. At her swearing-in ceremony, she was surrounded by family and friends, plus law enforcement representatives from Oregon and Washington that qualify as both.

When we catch up with her on February 5, it's not her first day on the job, but it’s close. She's already a common sight around the Albany department. A game of phone tag ends with officers spotting her around the building and transferring lines until, finally, Harnden lands in her new office, vacated by former Albany Police Chief Mario Lattanzio two hours before her swearing-in ceremony. The space has already been claimed by Washington state sports teams, family photos and knick-knacks collected over her long career.

“We own a house in Pacific City (Oregon), and we knew we would retire here,” Harnden said of her plans with her partner, Shanon, and of the chain of events that brought her to the mid-valley. “We just didn’t know if I would head into retirement or maybe take another opportunity.”

Then the emails started coming in. The city of Albany was in need of a new police chief. Lattanzio was set to retire after nearly seven years, and a nationwide net had been cast.

“I had some friends send me the post,” Hardnden said.

Oregon was, after all, the retirement plan, and Washington — specifically Bellevue — was growing, becoming more expensive. Its police department had been the only department Harnden had ever known. In fact, she quite literally grew up there.

“I was working at a Sears,” she recalled, adding that she had a knack for spotting shoplifters. “I joined security and thought, ‘This might be as close to the field as I get,’ because I was short and smaller."

But she applied to the Bellevue Police Department and rose from school resource officer to captain. Then the job posting regarding the Albany police chief position kept dropping into her in-box last year.

So Harnden did some research.

“I came down for the weekend,” she said. “I met with some folks in the community, and it felt like home here. I came from a city outside of Bellevue on a river with a historic downtown.”

She met with Lattanzio, spoke with people around the city and decided her experience was uniquely tailored to Albany. The issues it faced were not unlike those in Bellevue, and even the vast differences, like socioeconomics, gave her a different lens through which to view the city.

Homelessness, for example, is not necessarily an issue in Bellevue, which counts Bill Gates as one of its residents. But it is in Albany.

“Homelessness should concern all of us. It’s not a police department problem; it’s a community problem,” she said, noting that offering services and transitional housing is key.

According to Harnden, on every issue, from homelessness to crime, it all comes back to community.

“The surprising thing,” she said, “is that for a city of 55,000 people it has a small-town feel. You see that in the service at restaurants and stores. Everyone seems to know everyone here.”

It added to the attraction, she said, because community — and the relationships within it — can make even the most difficult situations easier. When investigating a homicide in Washington, Harnden said it was her department’s relationship with the Hispanic community that helped solve the crime and lead to an arrest.

“You have to have those relationships,” she said. “You can’t build a relationship in a crisis.”

And Harnden is already making the rounds here to make sure her foundation is in place. She’s had coffee with the fire chief and met the city councilors. She believes ties to the school district's administration are vital, and she's made it clear to her team that everyone in the community — regardless of gender, sexual orientation, country of origin or race — is to be treated with respect.

“The key is to know people,” she said. “I’ve long held that we say, ‘Come to the police department and talk.’ That doesn’t always happen. We have to go to where people feel safe. We have to do a much better job of offsetting some of the incidents that have happened in this country that have raised a distrust of the police.”

Some of those efforts may look like adding more school resource officers or holding more coffee-with-a-cop events, but Harnden said she isn’t naive about what she’s stepping into, either.

“I hear there’s a little problem with the budget,” she said, making good on the promise offered by a plaque in her office: “National Sarcasm Society.”

The Albany City Council adopted a balanced budget in June, but it included cuts to every city department, including freezing a half-dozen positions within the police department over the next two years.

“I have no control over the larger budget picture,” Harnden said. “I’m allocated X amount of money, but I can be a good steward of what we do have.”

Between the move, the daily commute from Pacific City, homelessness, a murder investigation, team-building and the dozens of other things piling onto her brand-new desk, Harnden hasn’t thought much about her new title — and what it means in a historical context. Mostly because she’s used to it. Women officers may make up only a small percentage of departments around the country, but in Washington, she’s worked with other female police chiefs and thinks the profession should do more to attract women to its ranks.

“I’ve always prided myself that gender doesn’t matter. I do my job as well as anyone else,” she said. “But in reality, it does matter. We need to work on the number of women in departments.”

About 30 minutes after landing in her office, she’ll head out again to talk with more people, to meet with a real estate agent and make her Albany move official. It will mean leaving behind some of the crowd that gathered Jan. 31 in the council chambers to wish her well.

“I’m pretty even-keeled,” she said. “I don’t get emotional, but to have that support, I almost lost it,” she said. “People come first for me, and some of that love, I think, was coming back to me that day. This is like going from one family to another.”

In a packed city council chamber with officers from Corvallis, Tigard and Albany — as well as from Seattle, King County and Port Orchard, Wash…

Changing of the guard: 2020 will see new Albany leaders

Things will look a little different in Albany in 2020.

Marcia Harnden, a captain in patrol and investigations for the Bellevue Police Department in Washington, has been selected as the next chief o…

The public can meet with four finalists for the position of chief of the Albany Police Department during a reception planned from 4 to 6 p.m. …

Coffee with a Cop draws a crowd at Albany YMCA

The Albany Police Department on Friday invited the public for conversation and coffee at the Mid-Willamette Family YMCA.

'We could do more': Albany law enforcement talks policy

Harnden looks at some of the plaques and awards she's received over her 27-year career, which began at the Bellevue, Washington, police department, where she rose through the ranks from school resource officer to captain.

Milt Harnden, right, pins the police chief badge on his daughter Marcia Harnden during a Jan. 31 ceremony in the council chambers of Albany's City Hall. 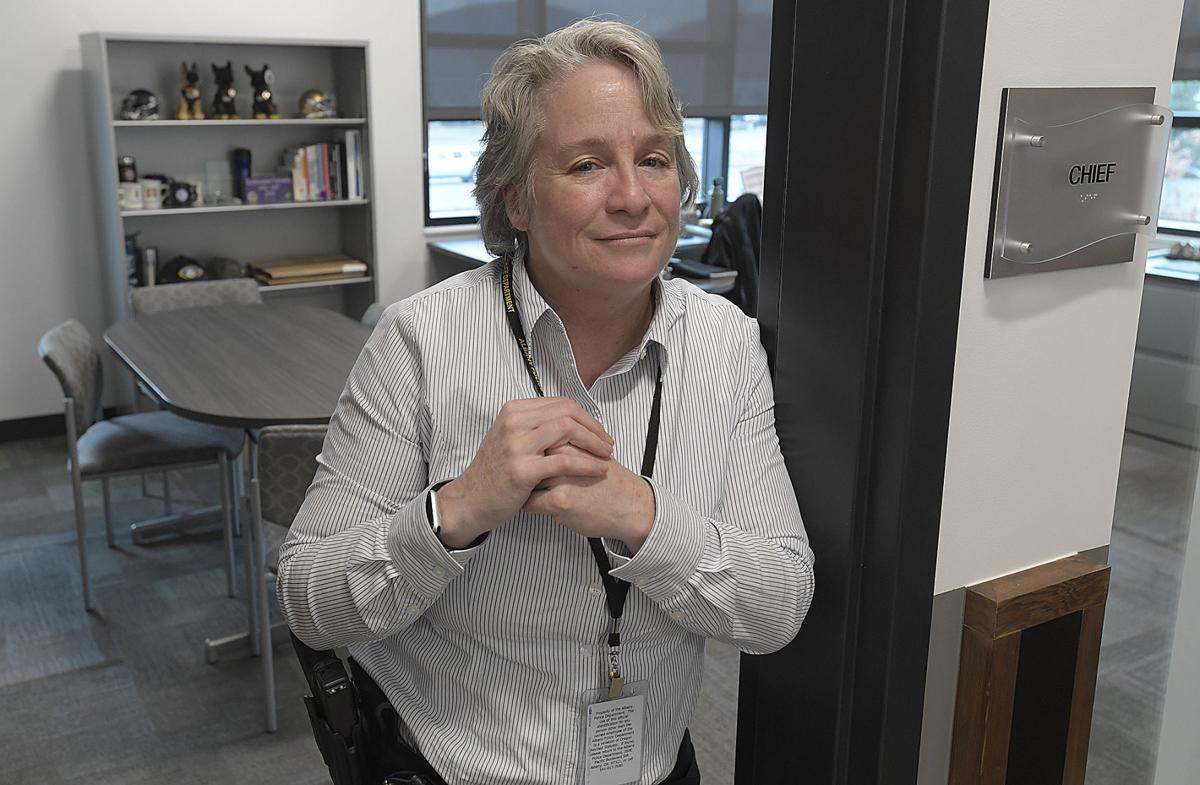