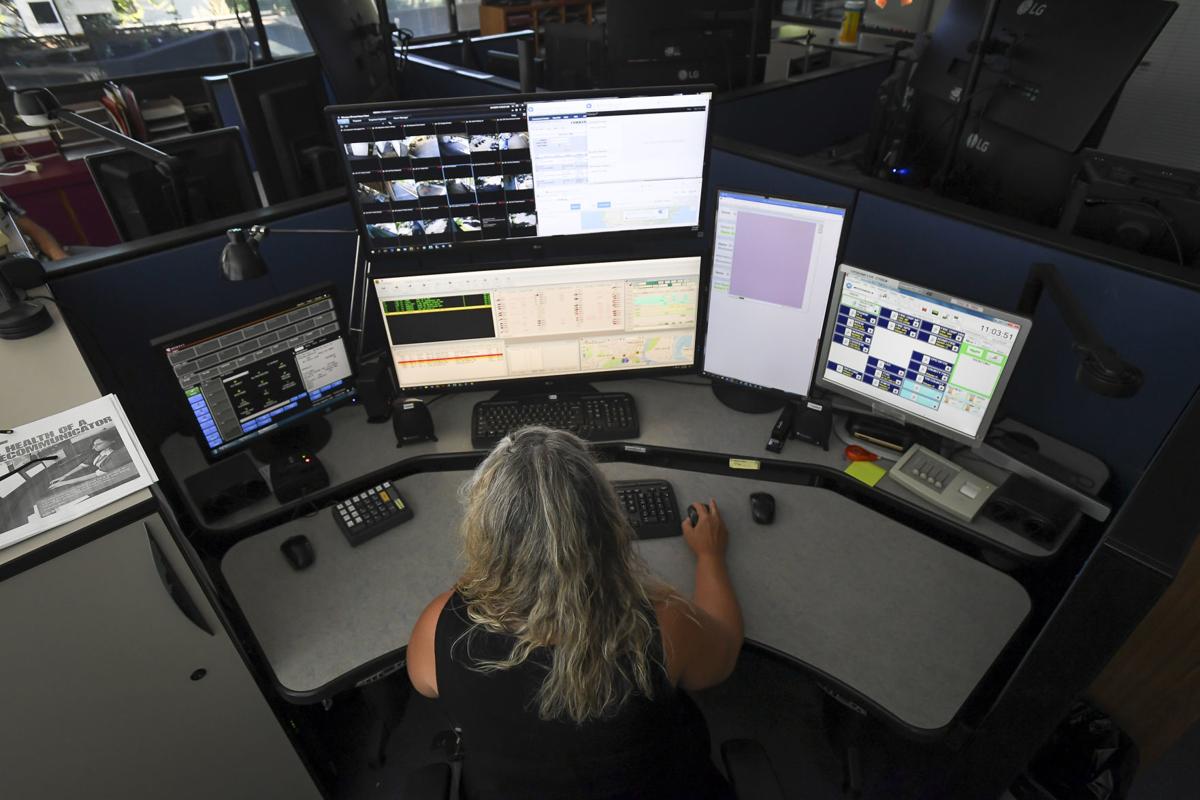 Lead dispatcher Heidi Ferguson works on a trespassing call on Aug. 1 at the 911 dispatch center. Benton County voters will consider in the Nov. 5 election a tax increase that would pay for expanded emergency service. 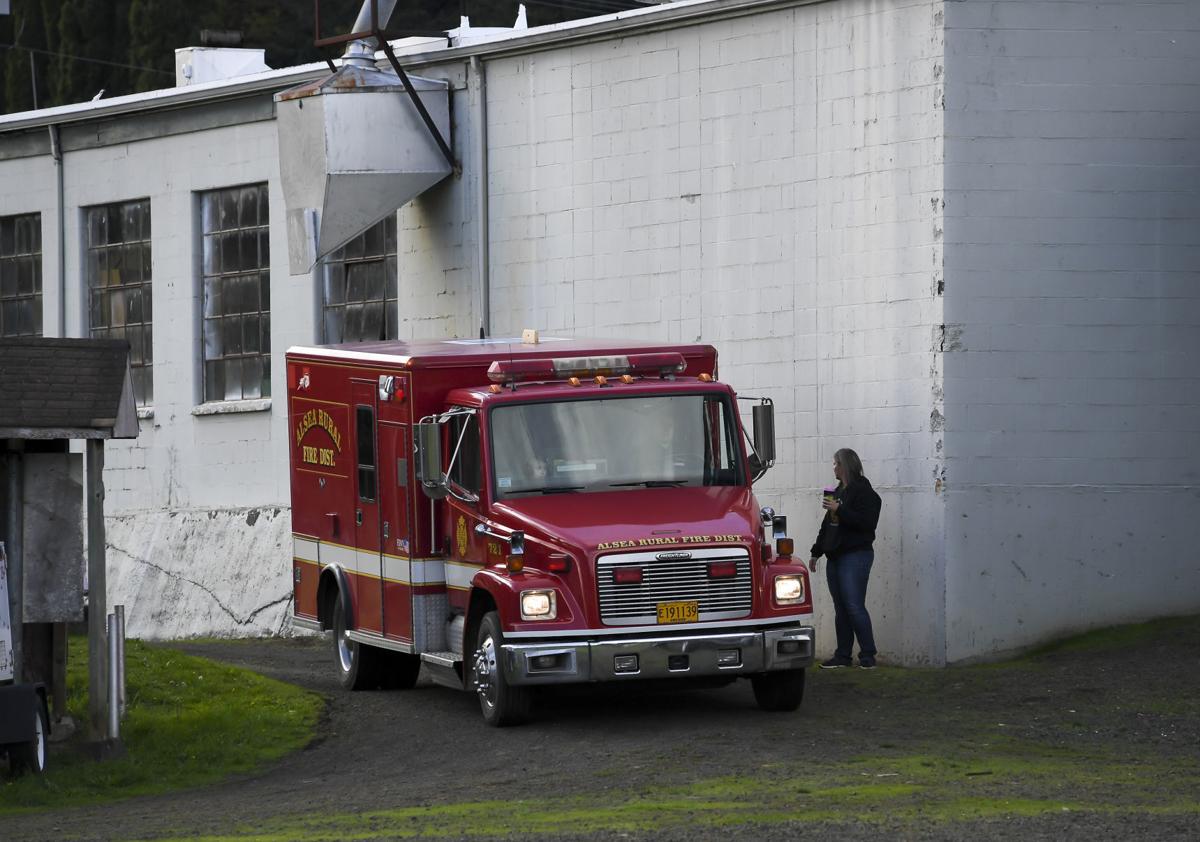 An Alsea Rural Fire Protection District ambulance is shown at a football game at Alsea High School on Oct. 4. Alsea was one of 12 law enforcement or fire districts that agreed to be part of a countywide emergency dispatch service district. Benton County voters will make the final decision Nov. 5. 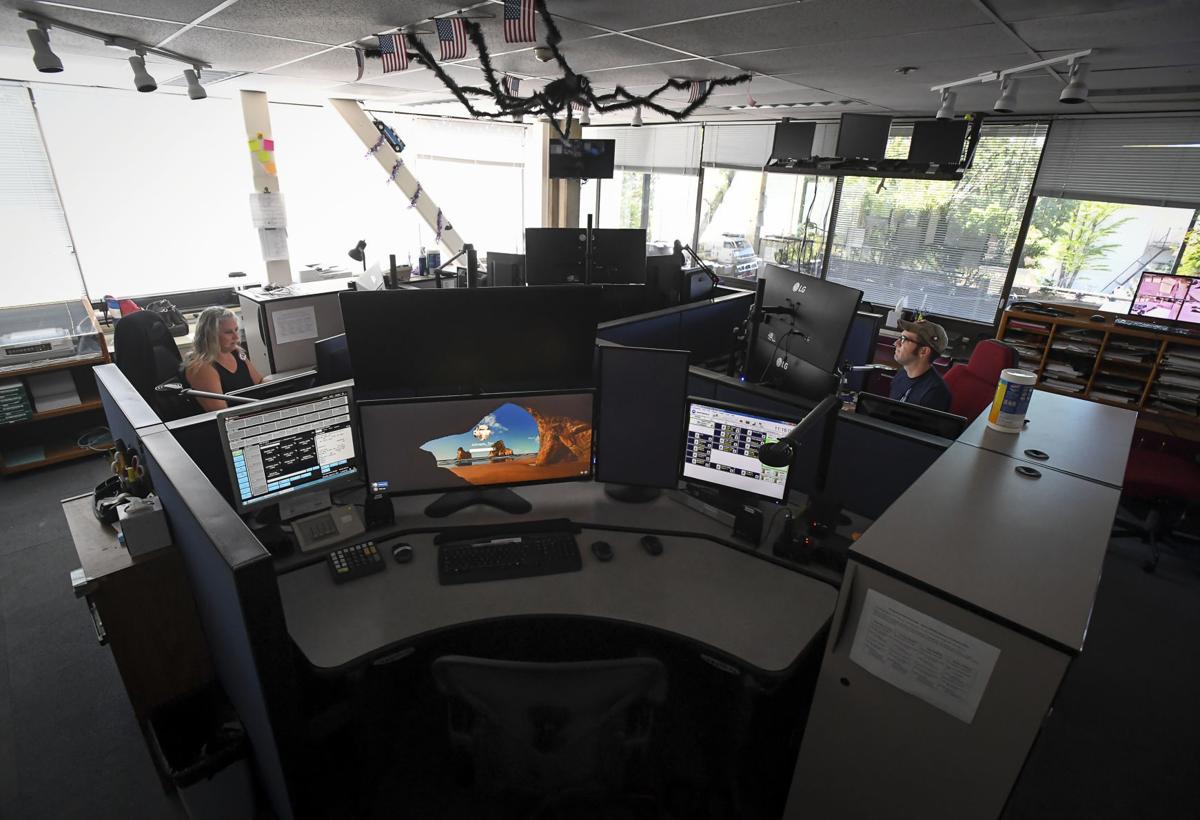 Lead dispatcher Heidi Ferguson, left, and Benjamin Martin take calls on Aug. 1. If Measure 2-124 passes in November, additional dispatchers would be hired to handle the increasing number of calls. 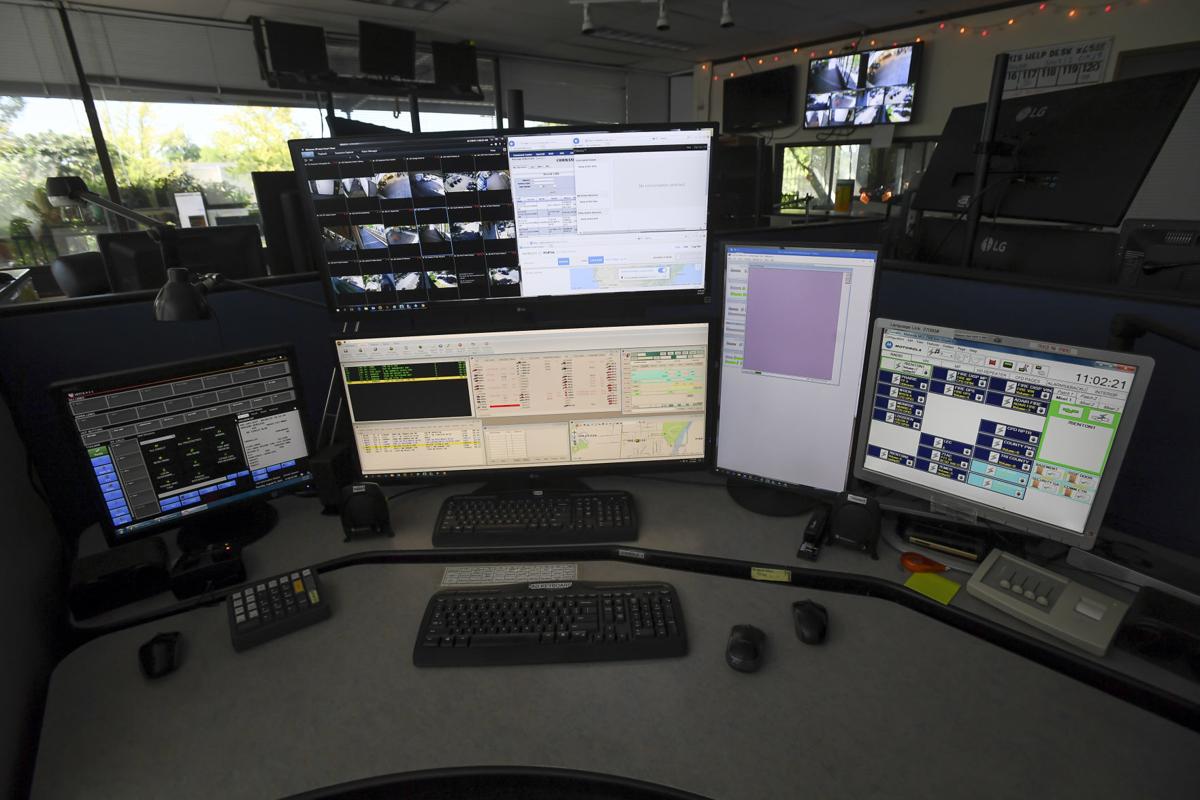 Here is a look at one of the work stations at the 911 dispatch center in Corvallis. 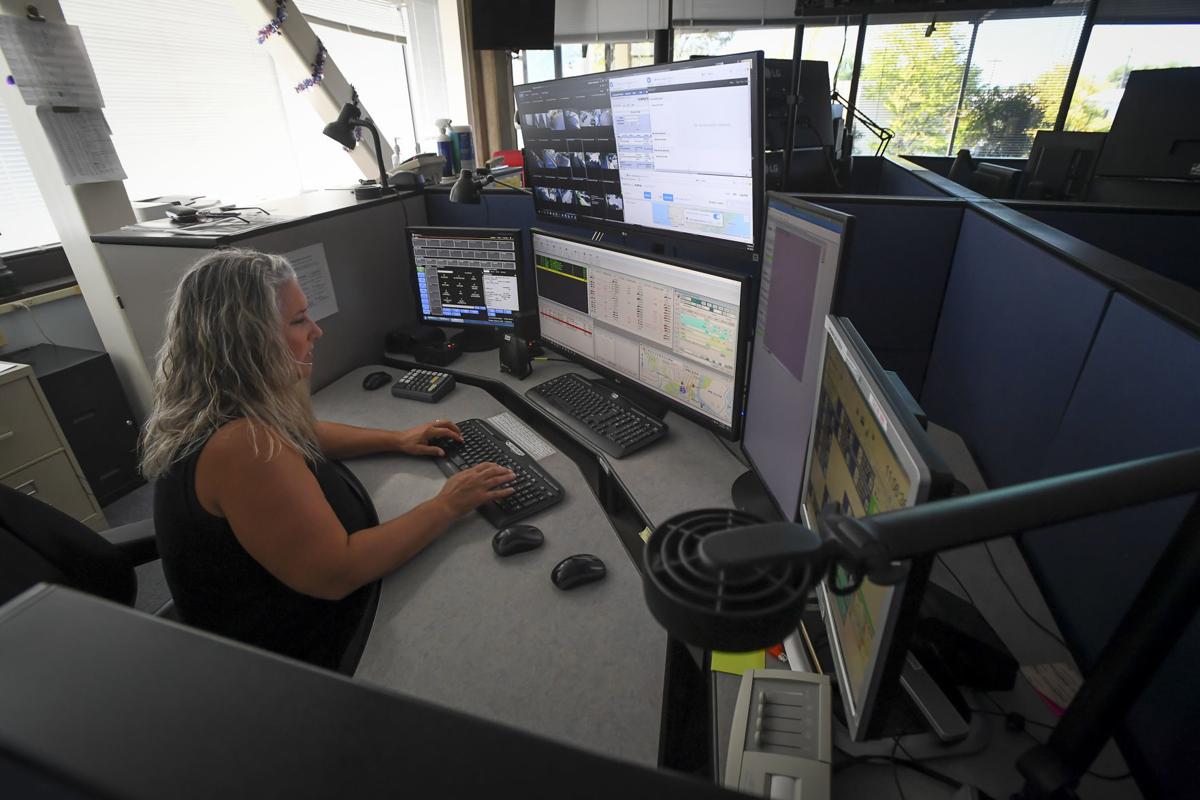 Lead dispatcher Heidi Ferguson works on a trespassing call Aug.1. The growth of cellphone technology has led to increases in the workload for dispatchers.

Those are the words you hear often when watching a police show. In real life, they are far more chilling.

Tanya Shivley of Philomath, who was living in another state at the time, recalls making just such a call when her mother was having a heart attack.

“How much is your emergency worth”? She asked in a letter to the Gazette-Times. “Believe me, when that ambulance pulls into your driveway to take your mom to the hospital, it is worth every penny.”

Shivley is backing Measure 2-124 on the Benton County ballot Nov. 5. The measure, if passed, would create a 911 emergency dispatch service district for most of the county. Included would be law enforcement offices and fire districts throughout the county.

The new district, which would be paid for via property tax increases, would allow the current dispatch center at the law enforcement building in Corvallis to increase from 17 employees to 28. District backers say the increase is critical to improving countywide emergency response.

The industry standard for emergency dispatch service is to get first responders en route to a call within 60 seconds 90% of the time.

“We don’t have the capacity to get medical and law enforcement moving quickly enough,” said Corvallis Police Chief Jonathan Sassaman. “And seconds count. If you are having a medical episode your body is going to choose to do what it does. If you are having a stroke or go into cardiac arrest your body doesn’t care what is the level of emergency service dispatchers you have on hand.”

Sassaman, along with Capt. Nick Hurley, was interviewed by the Gazette-Times on July 22, before Measure 2-124 was officially on the ballot in order to comply with state election laws that prevent city and county employees from advocating on election issues.

The basic problem, say Sassaman, Hurley and measure backers, is that the hiring of dispatchers has not kept pace with the number of calls the center is receiving.

Plus, officials say, the nature of calls has changed dramatically during that period.

“It’s the cellphone impact. That’s what is hurting us,” Hurley said.

Calls from land lines come into the center with an address attached. Not so with cellphones. A service call from a cellphone can take up to three times longer to manage, and cell calls increased by 1,207% from 2006 to 2018.

Curtis Wright, who chairs the campaign committee that is backing Measure 2-124, looked at the situation through the lens of a traffic crash on Highway 34. In 1983, he noted, a motorist would have stopped at the market at Peoria Road and used the phone booth to call 911. Now, 20 motorists will be dialing 911 on their smartphones to report the same incident.

“With cellphones you can get 10 to 15 calls on a house fire,” Sassaman said. “And the center is understaffed. But they can’t miss any of those calls. It could be a different emergency. We don’t have the capacity to handle all of that.”

There are three pages of information in the Benton County voters’ pamphlet from individuals and groups backing Measure 2-124. Included are the Corvallis Chamber of Commerce, the League of Women Voters and firefighter unions. No one submitted arguments against the measure.

The Gazette-Times has published 10 letters to the editor on the measure thus far, with eight favoring it and two in opposition. The letters of opposition focused on the challenge for residents in coping with another tax increase.

The city of Corvallis, the Corvallis School District and Benton County all have gone to the voters in recent years seeking additional funds for a variety of purposes (see the chart above). And the county almost assuredly will be coming back to the ballot, perhaps as soon as 2022, with a measure to pay for a new jail — and perhaps a courthouse as well.

The 911 district measure is part of a “three-legged stool” of revenue increases put forth by the city of Corvallis. The City Council passed a public safety fee in November that will add 25 police staffers and firefighters and city voters in May approved a renewal of the city’s local option property tax levy, which mainly will pay for parks and recreation services and the library.

If the 911 district passes, the city of Corvallis plans to reduce the public safety fee to account for the approximately $1 million it pays into the current 911 operation. That means that the $17.31 increase that residents saw in their monthly city services bill on July 1 would be reduced to $13.04.

It will be up to each of the other districts to determine how to avoid “double-dipping.”

Have there been too many money measures? Bill Dougherty of Corvallis says yes, noting in a letter to the editor that Measure 2-124 “is nothing more than a tax increase for Corvallis residents.”

Yvonne Morse differed, although she injected a note of caution into her support for the new district.

“I am concerned about the financial impact of the sum of the cost of each of these measures in addition to property taxes and other fees we pay to support the city and county government and how they impact the high cost of living in Corvallis,” she said. “I am fortunate that I am not on a fixed income, though, so I am able to absorb the increases for the time being.”

Wright, a “community enthusiast” and former ad agency owner, is a veteran of numerous local campaigns. He said backers of measure 2-124 plan to spend $10,000, with the bulk of the money planned for lawn signs, fliers, handouts and one direct mail postcard in mid-October.

Wright and his group of backers, including retired Corvallis Fire Chief Roy Emery, are using a targeted countywide mailing list.

“In special elections it’s really important to get your message to people most likely to vote in lower-turnout elections,” Wright said.

In Corvallis the campaign will be focusing most on Wards 1, 3, 6, 7, 8 and 9 because those precincts tend to vote in higher numbers and tend to back revenue measures.

“We’re looking for people who have voted in two of the last three elections,” Wright said. “Rather than hit all 20 houses on a street we are targeting ones in which voters are more likely to vote. This is not an unusual practice. We have done it this way on other campaigns. You tend to go where you believe your strength is the greatest. We want to make people aware of the issues and then do what we can to get them out to vote.”

The theme of the campaign is “every second counts.” Emery provided a scenario that noted the ripple effect when first responders can’t hit that 60-second benchmark.

“If it is 75 seconds rather than 60, that has an impact for every call further downstream,” Emery said. “That pulls all of them at least 15 seconds more behind. Start holding your breath and count to 15 and the importance of that 15 seconds becomes more apparent. And there is no one else to take other calls."

If passed the measure would authorize a rate of 65 cents per $1,000 of assessed property value, but officials plan to start the district at 45 cents, with a higher rate up to the full 65 cents available if growth demands it.

If Measure 2-124 passes, a governing board will be established at the county level with representation from each of the participating districts.

The board will decide how to handle the district’s budget, Benton County Commissioner Xan Augerot said.

Supporters of the measure said that the additional money raised by the measure would pay for dispatchers, establish a reserve fund to purchase equipment, and also give the district some financial breathing room to handle growth.

“Our funding structure is archaic,” Sassaman said. “By moving money away from the current model it creates equity countywide. It gives all jurisdictions a greater voice at the table. It gives us the financial ability to grow and meet the need countywide.

Nov. 5: Election Day. Ballots must be received by 8 p.m. (postmarks do not count)

What it does: Establishes a 911 emergency dispatch service district for most of Benton County.

Rate: The measure authorizes a rate of 65 cents per $1,000 of assessed value, but officials plan to start the district at 45 cents, with the higher rate available if growth demands it.

Outcome: If passed the measure would allow the current dispatch center in the law enforcement building, which has a budget that pays for 17 employees, to pay for 24 dispatchers, four supervisors and establish a reserve fund for equipment and facilities upgrades.

Here is a list of the 12 entities that will be part of the new district should Measure 2-124 pass:

The effort to form a 911 emergency services taxing district for Benton County is in the home stretch.

The Corvallis City Council and the Benton County Board of Commissioners meet at 4:30 p.m. Wednesday in a joint work session at the law enforce…

A crowded field of five candidates for the open seat in Ward 7 of the Corvallis City Council has made its pitches to the public.

Lead dispatcher Heidi Ferguson works on a trespassing call on Aug. 1 at the 911 dispatch center. Benton County voters will consider in the Nov. 5 election a tax increase that would pay for expanded emergency service.

An Alsea Rural Fire Protection District ambulance is shown at a football game at Alsea High School on Oct. 4. Alsea was one of 12 law enforcement or fire districts that agreed to be part of a countywide emergency dispatch service district. Benton County voters will make the final decision Nov. 5.

Lead dispatcher Heidi Ferguson, left, and Benjamin Martin take calls on Aug. 1. If Measure 2-124 passes in November, additional dispatchers would be hired to handle the increasing number of calls.

Here is a look at one of the work stations at the 911 dispatch center in Corvallis.

Lead dispatcher Heidi Ferguson works on a trespassing call Aug.1. The growth of cellphone technology has led to increases in the workload for dispatchers.