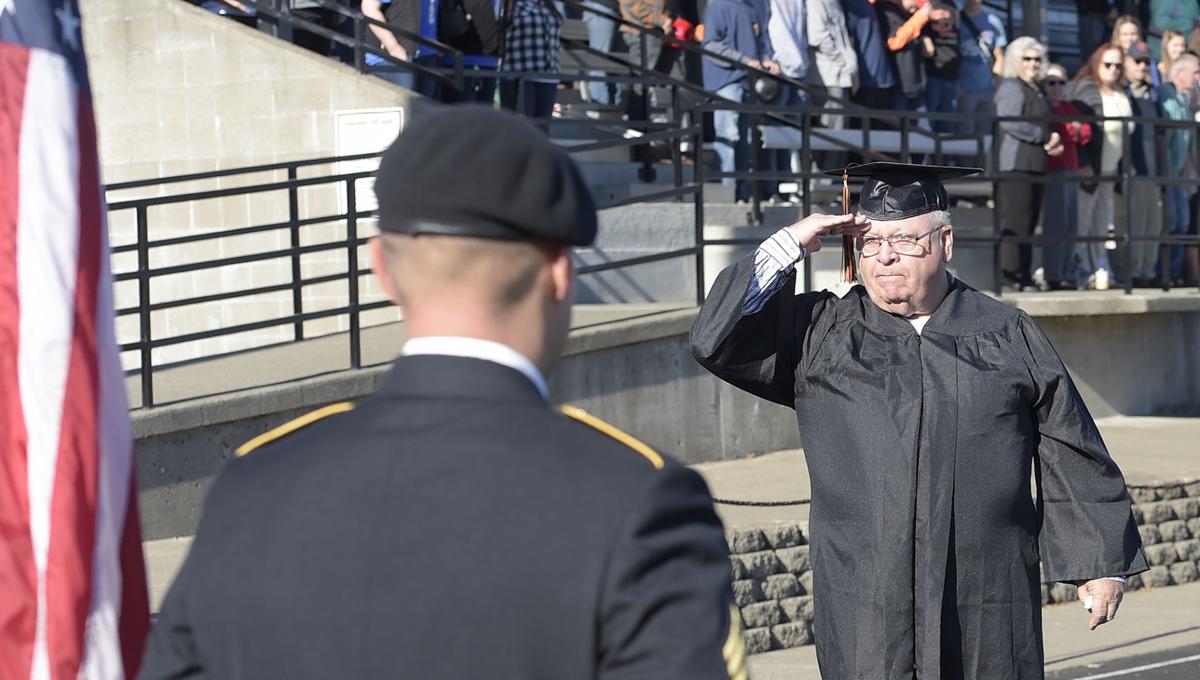 Michael Parker salutes the Oregon Army National Guard color guard as he goes to receive his long-delayed diploma from Scio High School. See more photos in the online gallery that accompanies this story. 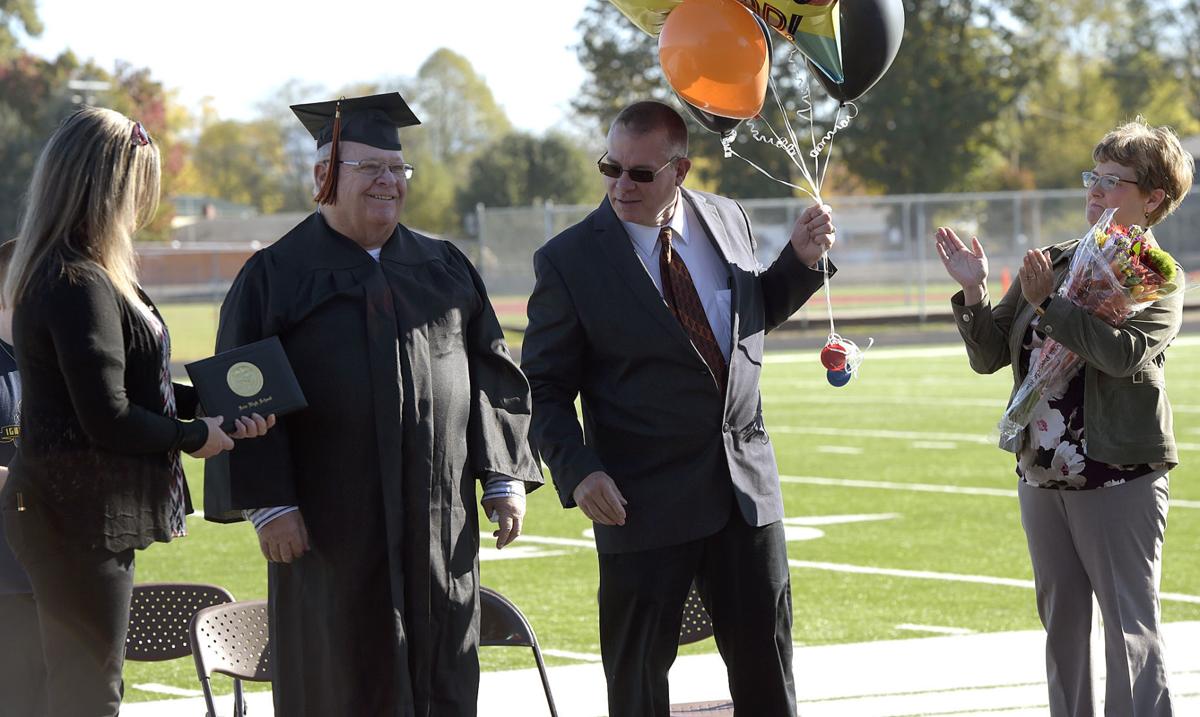 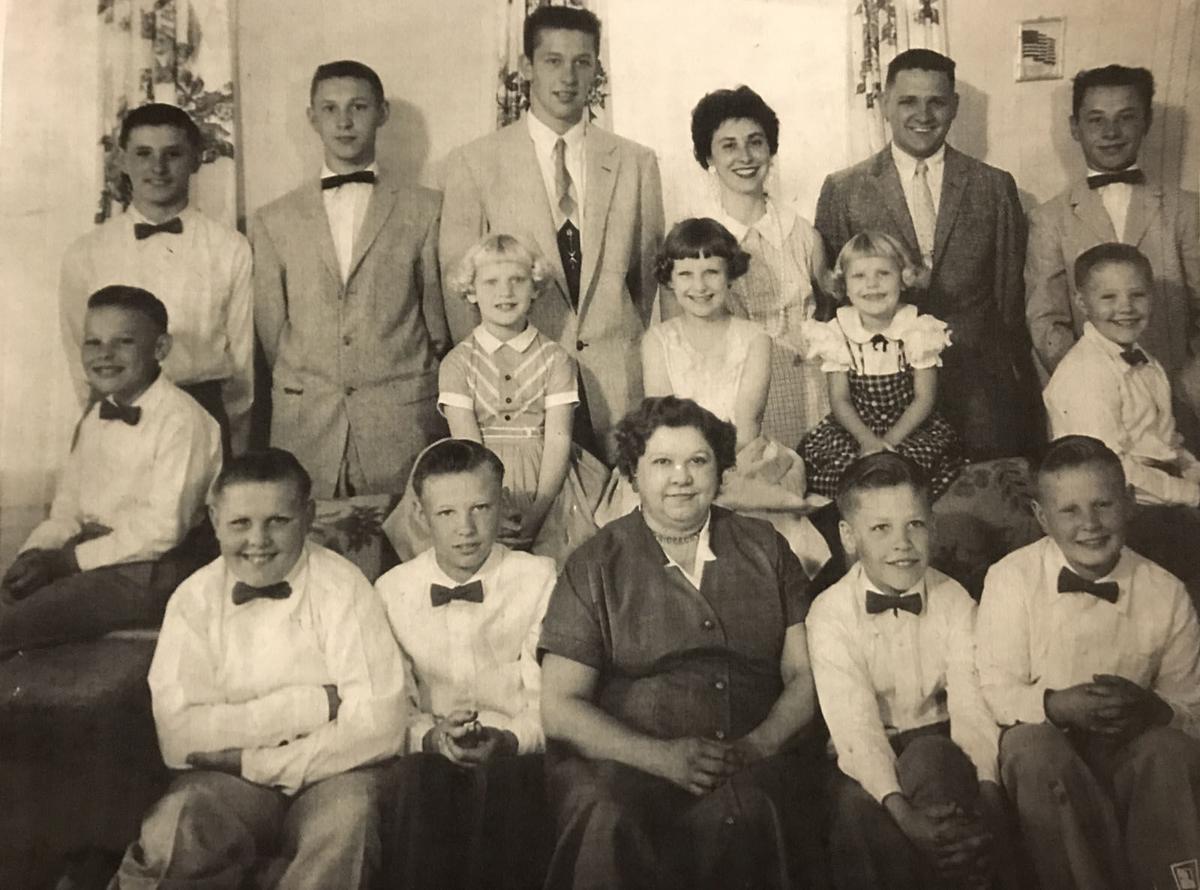 Michael Parker, pictured to the right of his mother, Agnes, is the 10th of 15 children, all of whom are now graduates of Scio High School. In birth order, the siblings are Pat, Jim, Don, Raymond, Robert, Darwin, Kenneth, Bill, Marvin, Michael, Gary, Dale, Connie, Donna and Sandra. 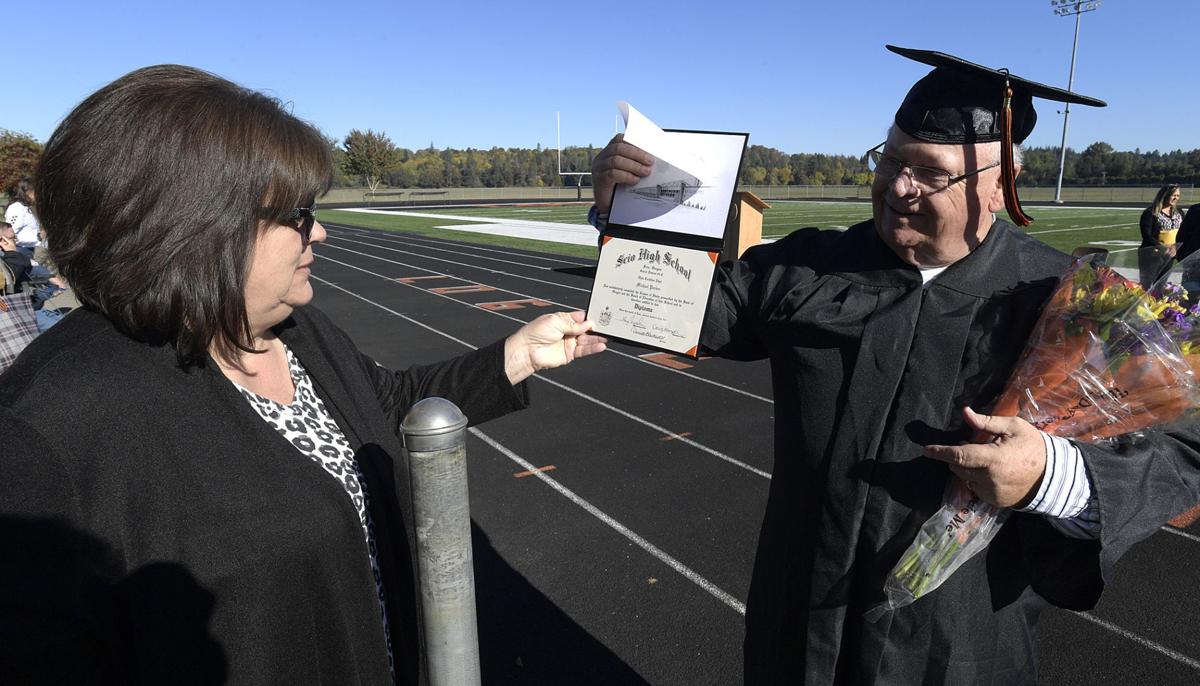 Michael Parker shows his diploma to his wife, Kathy.

SCIO — Michael Parker started his senior year in the fall of 1964, looking forward to commencement the following spring and receiving his diploma from Scio High School.

Two things got in the way: a misunderstanding with the principal over an unexcused absence — and the Vietnam War.

The principal is long gone now, as are the details of the argument that led to Parker's removal from the school. And the war that kept him from returning to class now belongs to history.

But after 53 years, his diploma is now a reality.

The ceremony took place on the high school track under a cloudless October sky. Superintendent Gary Tempel, state Rep. Sherrie Sprenger (R-Scio), Vice Chairwoman Kerri Hyde of the Scio School Board, and a color guard from the Oregon Army National Guard were among those on hand to honor Parker.

"It is my pleasure to present to you an additional member of the class of 1965: Michael Parker," Blackwell said as Hyde handed Parker his diploma.

Parker is the 10th of 15 children. All his siblings graduated from Scio High School, a fact of which his mother was enormously proud.

In fact, he said, that's the reason he gave when Superintendent Gary Tempel asked him why he wanted to pursue receiving his diploma after five decades.

"I said there’s several reasons, but the main reason is my mom cried a lot after I got booted out, because she was very proud all of her kids were graduating from the same school," Parker recalled. "I said it's probably not going to be a long long time before I meet her in heaven, and when I do, I want to be able to say, 'Mom, all your kids got a diploma from Scio High School.'"

Parker remembers being a good student at Scio High, although he and the principal never got along. He was drafted into the Army the summer of 1965 and trained to be a gasoline mechanic after completing his basic training.

He spent 14 months serving in Vietnam and Thailand as a helicopter gunner with the 334th Aviation Battalion. One day, he recalled, "we watched these planes drop Agent Orange over about a square mile. In less than two hours, there wasn't a leaf left anywhere."

Parker was on one of six helicopters serving the area. Each had two gunners. Of the 12 gunners, four were named Michael.

He remembers the day the colonel told him the enemy didn't like Americans and would cut off their hands, feet and heads to make their bodies impossible to identify.

"So he said, 'You Michaels, you each pick a nickname and we're going to tattoo it on your upper arm, so if something happens we can tell who you are,'" Parker said. "They called me first, so I just put Mike.

"After the week was over, I was the only Michael that made it out of there."

Parker worked as a mechanic at a tire store when he first left the military, then opened his own business, Mike Parker Tire Center, in Dallas. He had that for about 14 years, then drove a truck until his retirement in 2013.

He earned his General Education Development certificate during his service, but after 50 years, the record no longer exists.

"I tried every way. I even called the main GED outfit, I think it was in Ohio or something like that. They said if it's been over 50 years, just forget it," he said.

The diploma was his real goal, however. Classmates, who held gatherings each year and always made sure he was invited, encouraged him to look into receiving one.

"He should have gotten a diploma from Scio High School. He earned it," said Lance Shelton, one of the classmates in the audience Tuesday. "I encouraged him. I'm proud of this day. It's a great accomplishment."

Parker said while searching for his GED scores, he learned Oregon law allows honorably discharged veterans who served in wartime to receive diplomas.

Tempel, the superintendent, said Scio was glad to help make that a reality. "This event has brought smiles to my face all fall, every time I thought about it," he told the audience Tuesday.

Blackwell, the principal, said Parker wanted to keep the event low-key, so she didn't set the ceremony up as an all-school assembly.

But several students asked to come anyway, which Parker agreed would be all right. And Scio graduate Nelda Noss, who graduated with Michael's brother Marvin, said she was glad to see them because the ceremony is a lesson for them, too.

"That's a good motivation for kids. They can see that tenacity pays off," she said. "Sometimes people struggle along the way, and they pull it out."

Gallery: Michael Parker gets his diploma

Michael Parker salutes the Oregon Army National Guard color guard as he goes to receive his long-delayed diploma from Scio High School. See more photos in the online gallery that accompanies this story.

Michael Parker, pictured to the right of his mother, Agnes, is the 10th of 15 children, all of whom are now graduates of Scio High School. In birth order, the siblings are Pat, Jim, Don, Raymond, Robert, Darwin, Kenneth, Bill, Marvin, Michael, Gary, Dale, Connie, Donna and Sandra.

Michael Parker shows his diploma to his wife, Kathy.