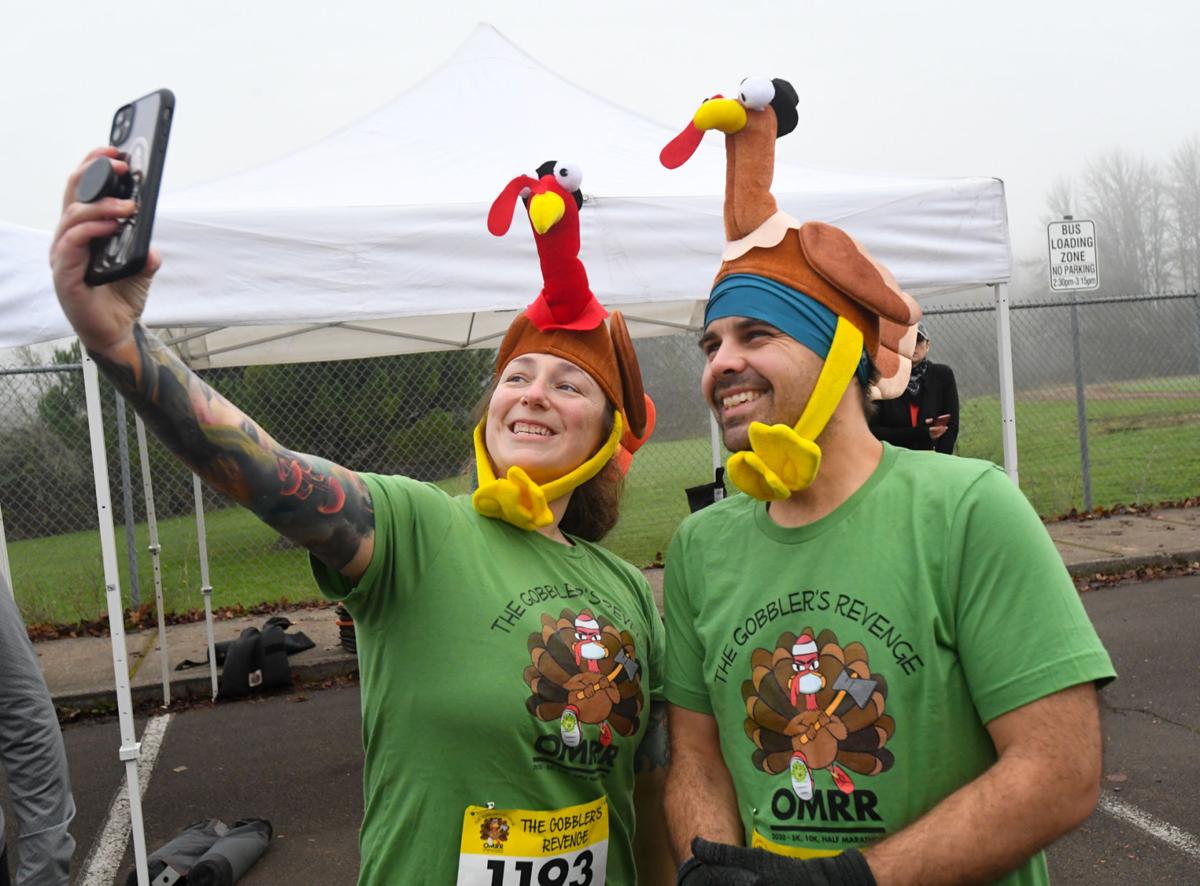 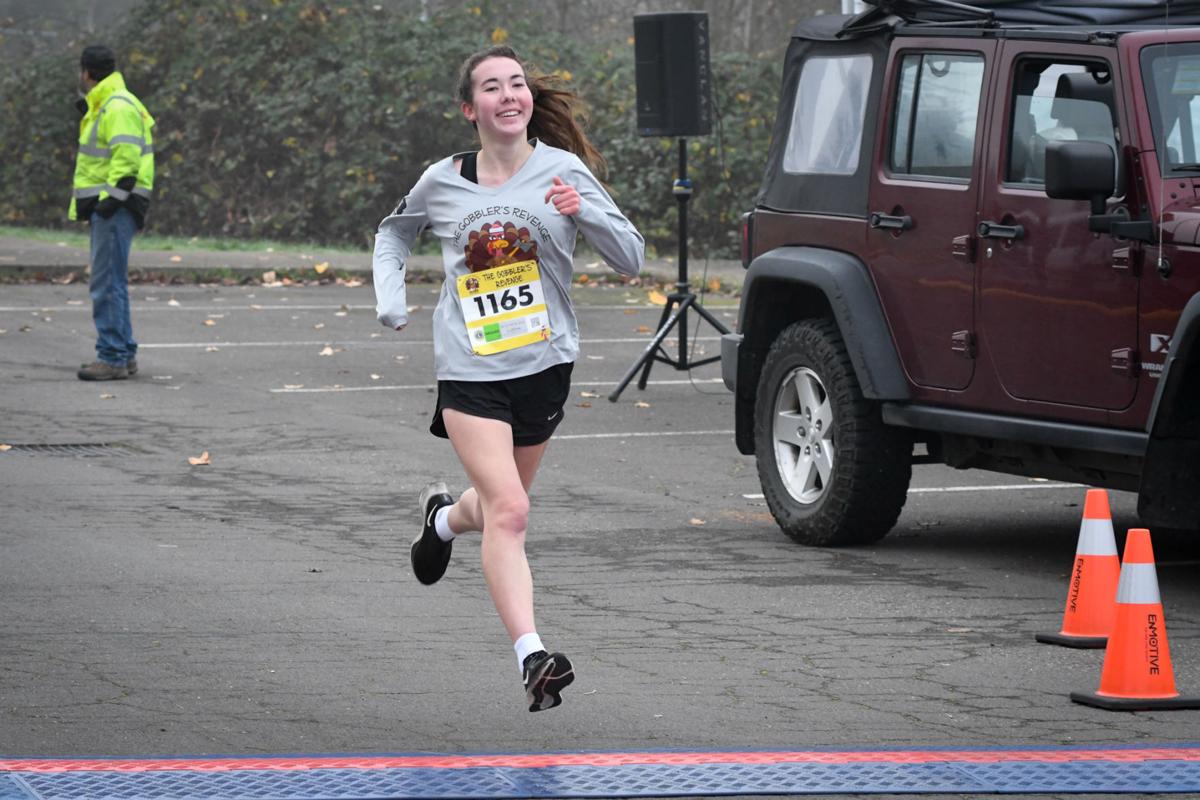 Megumi Ludlow of Albany finished first in The Gobblers Revenge 5K with a time of 20 minutes, 59 seconds. 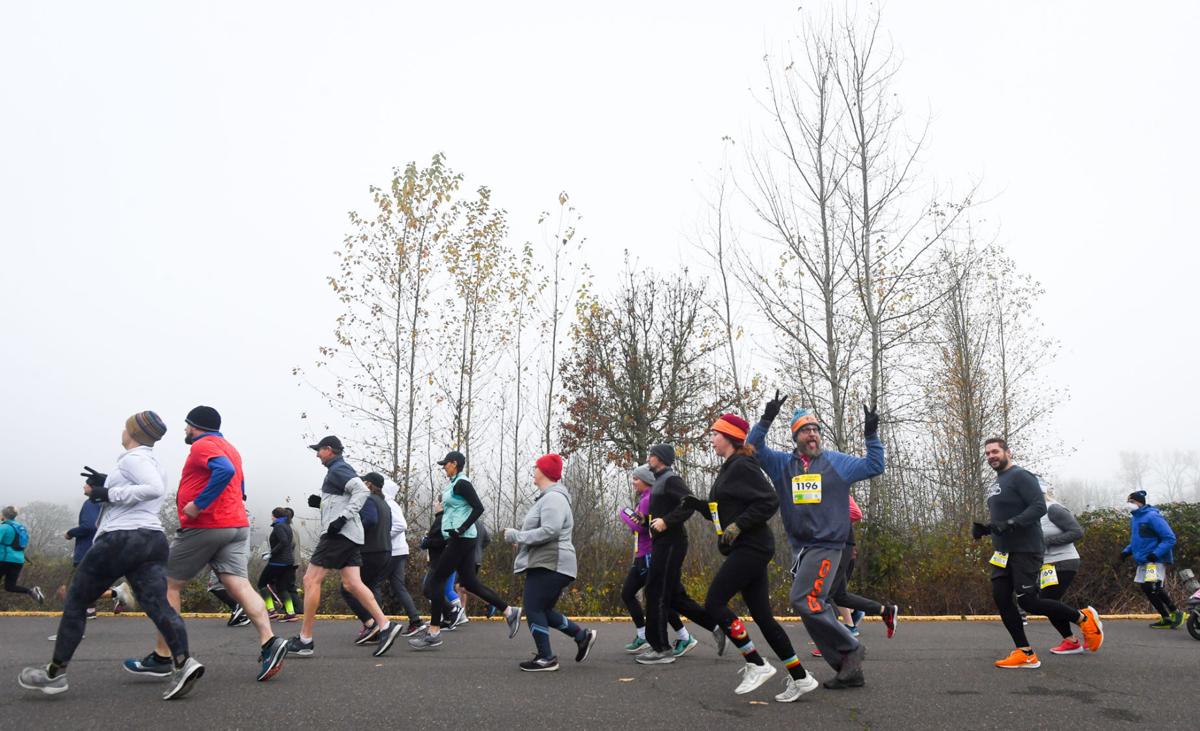 More than 300 runners and walkers participated in the 13th Annual Gobbler's Revenge in Albany on Thursday morning. 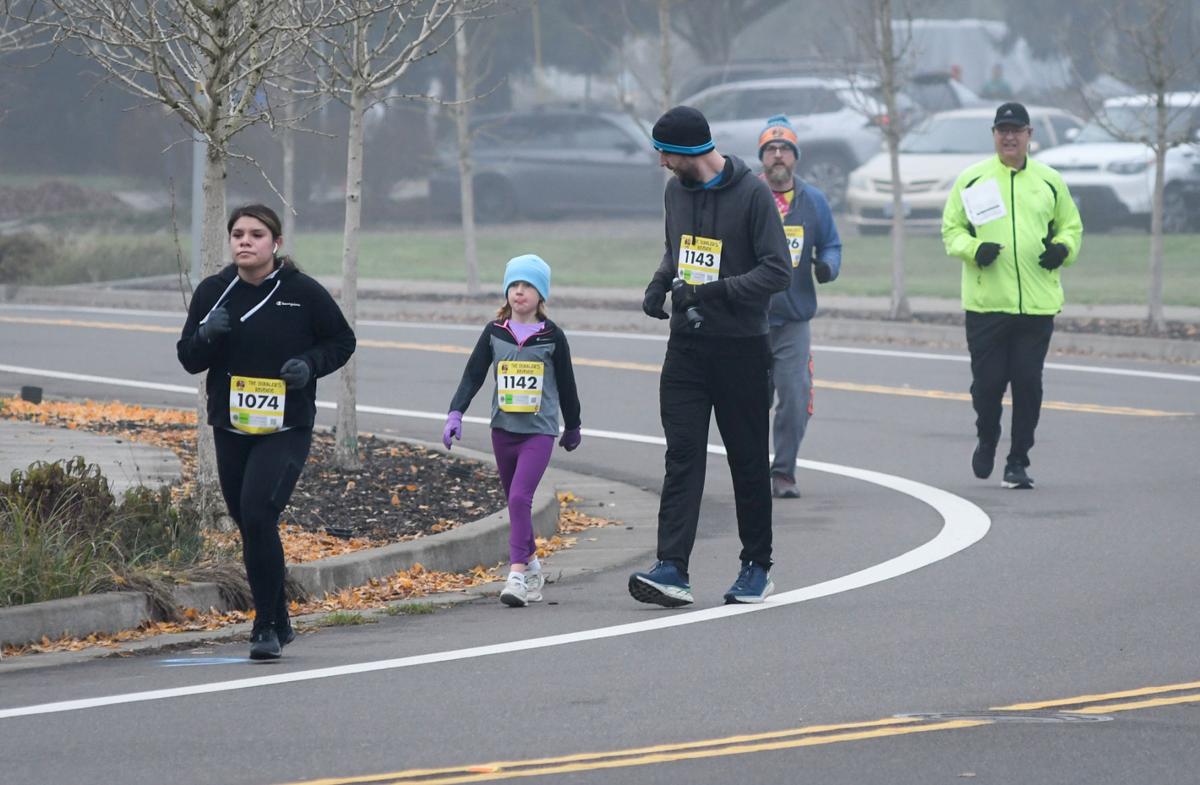 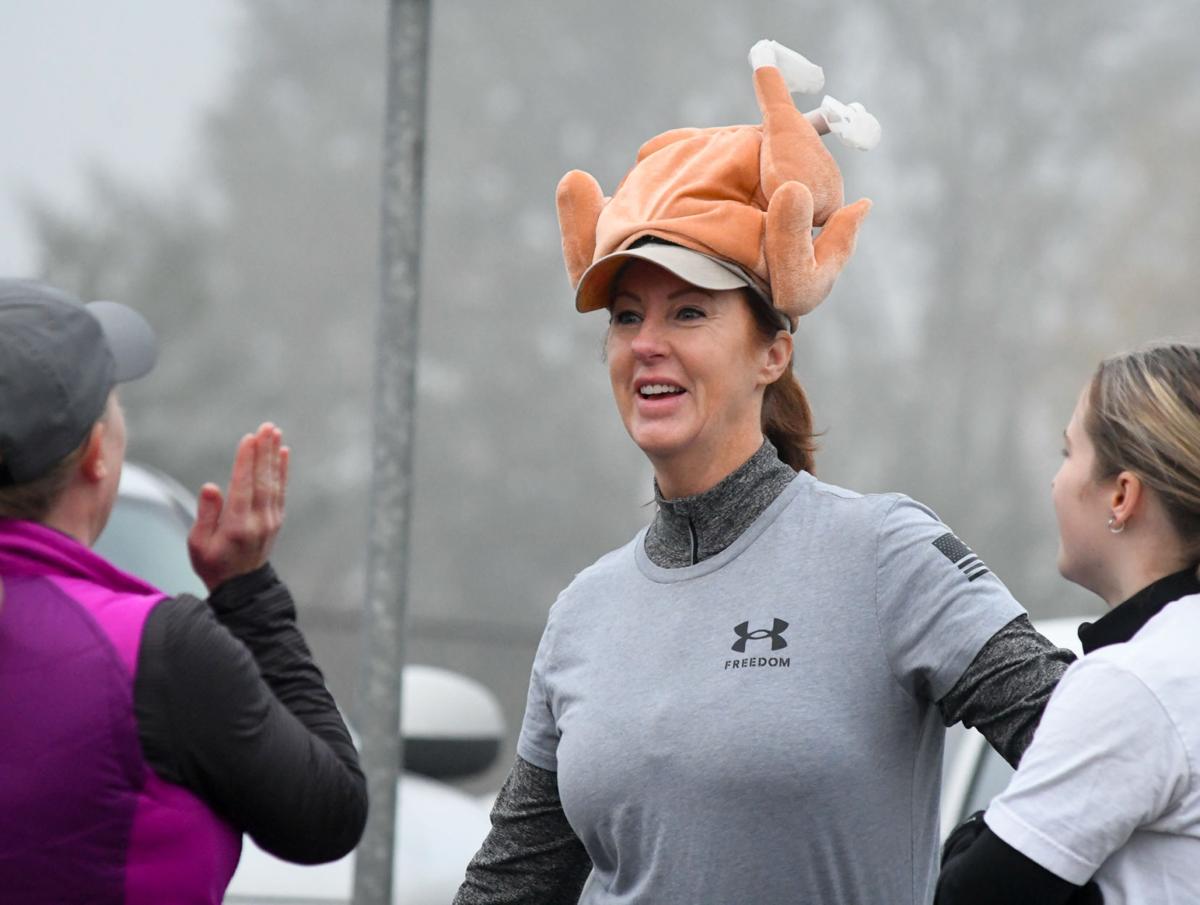 Donna Holt of Albany warms up before the start of The 13th Annual Gobbler's Revenge 5K road race Thursday morning.

More than 300 participants woke up early and ran in the fog on Thanksgiving morning to participate in this year’s Gobbler’s Revenge Oregon Mid-Valley Road Race. They won’t need to feel guilty about that second helping of turkey and stuffing at the dinner table.

It’s the 13th annual event, put on by the Corvallis Lions Club, and is the brainchild of Jim Abbott — no, not the one-armed major league pitcher. Abbott, a native Oregonian, got the idea from the Manchester Road Race in Connecticut, an area he used to live in back in the 1980’s.

“When I came back to Oregon, I was looking for a fundraiser and thought this would be a good fundraiser to do,” he said. “It’s become kind of a tradition here in North Albany, so we’re glad to be bringing it back.”

The race almost didn’t happen at all last year, and you can probably take an educated guess as to why. It’s not hyperbolic to say that this pandemic has affected every aspect of life.

Last year’s race was essentially self-guided. Rather than having all the participants take off as a crowd for each distance — from a short walking route to 5K, 10K and half marathon offerings — from North Albany Middle School, people instead signed up for a specific time to start and then did the route.

This year, while still a little pared down from previous years, was more like the traditional runs. And certainly more people participated than last year.

Road marshals directed traffic and participants along the course, making sure the whole affair was safe and that runners didn't veer off course.

It’s not just a fun tradition, the races are a fundraiser for the charitable operations that the Lions Club oversees. Abbott said the club partners with organizations like Benton County Public Health to provide vision and hearing care for those who might otherwise not be able to afford it.

Money from this year’s races will find its way toward paying for eye exams and hearing aids, for example.

It’s the charitable component of marathons of all kinds that draw people from many walks of life to participate. While some are just in it for exercise or for the practice between cross-country seasons, others run in support of their loved ones.

April Warburton, 54, for example, ran for her sister. Warburton came all the way from the United Kingdom to visit her family — she’s native to Corvallis but married a British chap — for Thanksgiving. She ran The Gobbler’s Revenge with her sister and nephew several years ago, but her sister can’t run this year following a debilitating car accident last November.

“She had a broken jaw, several broken ribs, she broke her wrist,” Warburton explained. “This is the first time I’m seeing her in two years. COVID’s been so awful … it was just terrible that I couldn’t travel to see her last year after all that.”

While Warburton is a seasoned 5K veteran, doing weekly “Parkruns” in London, she said it was especially nice to run this 5K in her home state and in her sister’s stead. That made it all the sweeter that Warburton was the top overall woman in the Master’s category (for those who are over 50), and the second overall woman in the 5K race.

The first overall woman — the first person to cross the finish line all morning, in fact — was 17-year-old Megumi Ludlow. She’s a cross-country runner for West Albany High School and even took second place overall at the state track meet this year.

She, like many of the cross-country athletes participating Thursday morning, said she was doing this as a way to stay in shape and see how much she’s slowed down after a two-week break following the regular season.

“I decided to do the 5K run mostly as a way to see how much speed I lost,” Ludlow said. “There wasn’t much other competition because most of the cross-country runners where in the 10K category.”

Robert “RJ” Kennedy, 18, was the overall winner of the 10K. He’s also a cross-country athlete, though he runs for Lebanon High. He ran the race with his coach, Cam Eberhart, 33.

The two even tied for the honor of being the first up the hill on Scenic Drive. They didn’t seem too worried about how they were going to split the $50 gift certificate.

“The course was nice (and) hilly, I wasn’t expecting that,” Kennedy said. “I just enjoy coming out with friends.”

It was Kennedy’s first 10K race, though Eberhart has done so many he’s lost count.

“I grew up here in Albany,” said Eberhart, who now lives in Brownsville. “So it was nice coming back and running some of the scenic hills. It was fun running in the fog this morning.”

While the top three spots in every category would normally receive a prize, the event restricted prizes to just the No. 1 runners in each race this year. The goodie bags contained a branded hoodie, a gift certificate and free entry into next year’s race.

Boxes of See's candy were on-hand for those who were so inclined, as well as coffee, cocoa and hot cider being given out at the Lions Club food truck.

Half marathon finishers also got a bumper sticker and a medal with the Gobbler’s Revenge logo of a menacing turkey holding an ax. This event sure makes it difficult not to think about what you did to his siblings and cousins. People posed at an oversized picture frame with the logo upon completion of their races, though, so it’s all in good fun.

The half marathon winner was Logan Parker, 17, who runs cross-country for South Albany High School. He ran with fellow teammates Diego Perez, 17, and Joey Markham, 16. All of them said they recognized familiar faces of other cross-country competitors, like Kennedy, who they’ve raced against during the regular season.

“It was a fun course,” Parker said. “The big hill I think was the best part. A real mental grind.”

Despite munching on fruit and granola bars provided by the race organizers while awaiting the overall results, many participants said they were looking forward to their big Thanksgiving meals in the afternoon.

Bring on the gravy.

There's still time to register for the Gobbler’s Revenge, a trio of Thanksgiving benefit running events that raise money for the Corvallis Lio…

As the executive director of Oregon Tradeswomen, Kelly Kupcak wants to see other women — and people of color — have the same opportunities for…

Megumi Ludlow of Albany finished first in The Gobblers Revenge 5K with a time of 20 minutes, 59 seconds.

More than 300 runners and walkers participated in the 13th Annual Gobbler's Revenge in Albany on Thursday morning.

Donna Holt of Albany warms up before the start of The 13th Annual Gobbler's Revenge 5K road race Thursday morning.