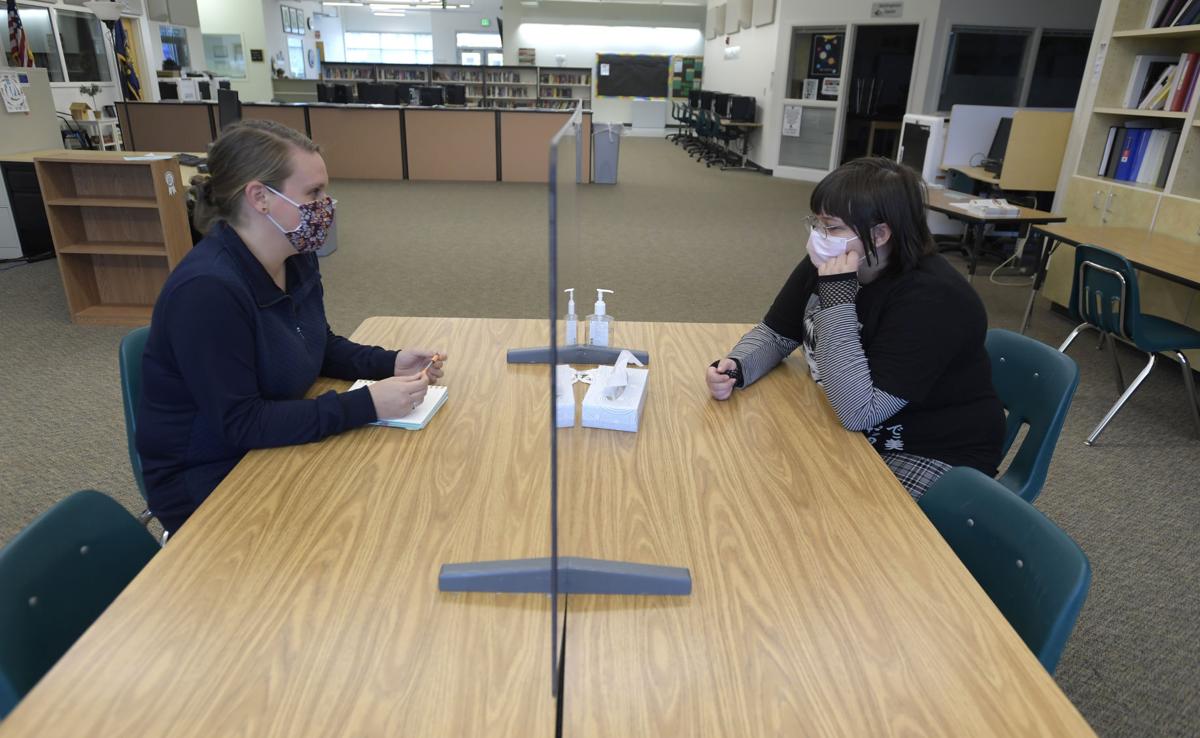 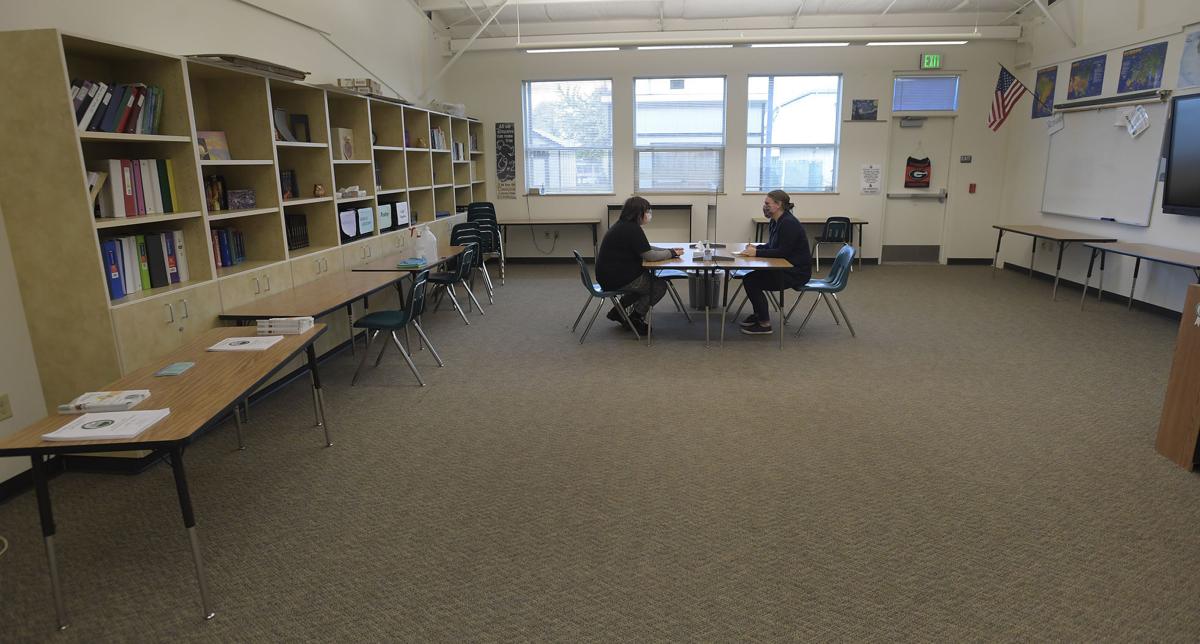 Harryman uses a classroom to create the personal distancing space needed in order to adhere to COVID-19 protocols.

Anna Harryman’s office sits almost directly in the middle of the open-space classrooms of Albany Options School. And it’s not unusual for students to pop in to see the counselor in between classes or for her to be able to walk the long hallway and touch base with the teenagers who may need an ear.

In fact, throughout Greater Albany Public Schools, counselors are used to being able to catch students in hallways and classrooms or seeing their heads pop into their offices, students plopping right down into a chair and sharing their anxieties, worries, problems or successes.

But there hasn’t been a student in the hallways in months. Not a head in a doorway or a body in a chair.

COVID-19 closed schools in April, moving learning online. The hope was to be able to open classrooms again in the fall, but rising cases have meant students remained in comprehensive distance learning with very few exceptions. And while some students have been able to return to the classroom on a limited basis, the hallways are still sparsely populated and the opportunities for counselors to reach students have dwindled — just as the need for mental health and emotional support is crescendoing amid the pandemic.

“Traditionally, I would have 30-minute appointments back to back,” said South Albany High School counselor Bryce Bennett. “But if there was a priority and a student needed to see me, I could juggle things and fit them in. Not anymore.”

Harryman, who is the counselor at AOS and lead counselor for the district’s 17 counselors, said appointments can still be made, and for the most part those happen via Zoom or phone. But individual appointments are still possible. At South, Bennett can accommodate smaller groups, but it means moving from his office to a larger classroom or conference space.

On Tuesday, all 17 counselors from the district met (virtually) to have a discussion.

“We talked about what’s working, what proactive steps we’re taking to address mental health and what counselors can and cannot do with COVID-19,” Harryman said.

The virus has impacted the way in which services are distributed, but it’s also raised issues with students’ abilities to seek those services out. With social distancing in effect, many students are at home for the majority of the day and may not be able to speak as freely as they could in a counselor’s office.

“Many of the issues we work with are related to home,” Bennett said. “If they have to reach out by email or Zoom with parents in the background, it’s a lot more complicated and difficult.”

In the 17 years he’s been a counselor at South, Bennett has seen difficult. But 2020 has raised the stakes, shifting students' concerns and impacting their mental health.

“We say kids are resilient, and they are,” Bennett said. “But they’re people too.”

Some of the most common conversations he has now, he said, are with seniors.

“They say they’ve been dreaming about senior year for years and now it’s not going to be the experience they thought they were going to have,” Bennett said. “They say they worry there might not be a prom or homecoming games. This isn’t the way it’s supposed to be. And also I think they take on what’s going on at home. If Mom or Dad lost their job or they can’t see their grandparents, it affects them.”

Harryman said students around the district have been given a survey to gauge what the needs of the community are, ranging from food to clothes to technology and mental health. She said the numbers surrounding suicide and other serious mental health issues haven’t changed much from previous years. Neither has anxiety.

Bennett said he has seen the steady numbers in terms of anxiety and has his own theory.

“It’s just shifted. They’re still experiencing anxiety, but now it’s not anxiety about peers or those situations at school. It’s now anxiety about life and the future.”

That, Bennett said, could be a problem.

“The analogy I use is Vietnam veterans,” he said. “When the war is going on, they’re surviving. When they fall apart is when they come home. It’s the same concept. So, one of the things we’re trying to prepare for is what is this going to look like when the dust settles and everything goes back to normal and we have time to process our feelings?”

For now, GAPS counselors are doing the best they can with what they have. Students can make appointments for Zoom or phone calls. They can also meet in person, one on one, with their counselor at certain district properties. Counselors are also utilizing Zoom as the new hallway — bringing students into virtual breakout rooms while they’re in math or English class, for example, and already on Zoom.

“We’re doing a lot of outreach,” Bennett said, noting that the biggest issue he’s heard from students is the feeling of hopelessness and the ambiguity surrounding the end of the pandemic. “Whenever I work with students, I share that it’s OK to feel this way. The question is what do you do when you feel this way, and we hope that students respond with, ‘Reach out.’”

Students can reach their counselors by contacting a teacher, the school they are assigned to or the district office. Harryman said students can also email counselors directly from Canvas, the platform for distance learning.

Meghan reveals she had suicidal thoughts

A few years ago, the Confederated Tribes of Grand Ronde approached the state of Oregon about reestablishing a fishing platform at Willamette Falls.

GAPS will adhere to 14-day quarantine rule for travelers

Greater Albany Public Schools Superintendent Melissa Goff said Monday she would not stop families from gathering or traveling for Thanksgiving.

The Greater Albany Public Schools board has opted to fill a vacant board seat on Dec. 7.

In the nine months since COVID-19 reached the U.S., health officials have been clear on how to best combat the virus: wash your hands and wear…

Greater Albany Public Schools has announced the process it will use to fill its newly vacated board seat.

About 9% more of the high school students in Greater Albany Public Schools are failing a class compared to this time last year.

Central Linn says in-person learning up to the community

The Central Linn School District students could possibly return to in-person learning on Jan. 4. Whether that happens, the district says, is u…

When Daniel Lowery is doing his job right, he loses students.

Last week, Central Linn School District Superintendent Brian Gardner said it was up to the community to control the spread of COVID-19, potent…

Students ask school board for a chance at mural

Greater Albany Public Schools Superintendent Melissa Goff saw a presentation six weeks ago that was so good, she invited the group to Monday's…

Harryman uses a classroom to create the personal distancing space needed in order to adhere to COVID-19 protocols.