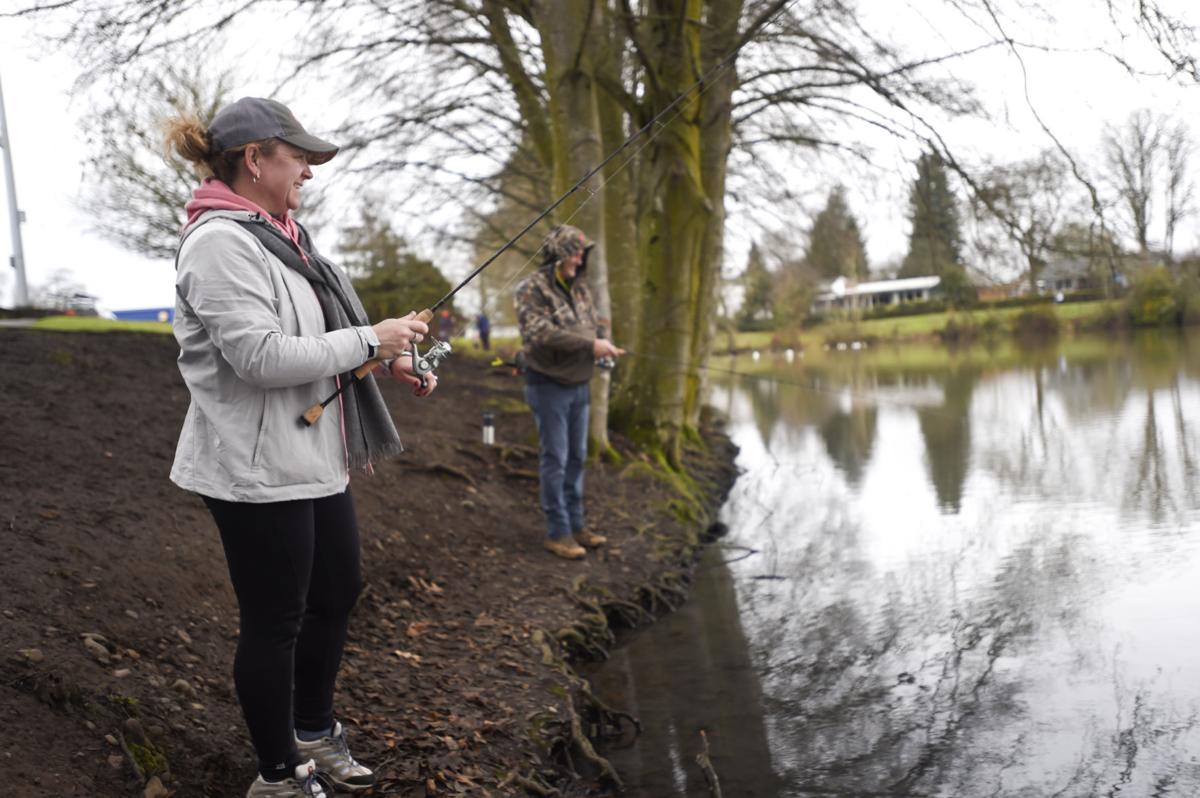 Cathy and Gary Hammer, of Albany, fish for the first time at Waverly Lake on Thursday, December 28. 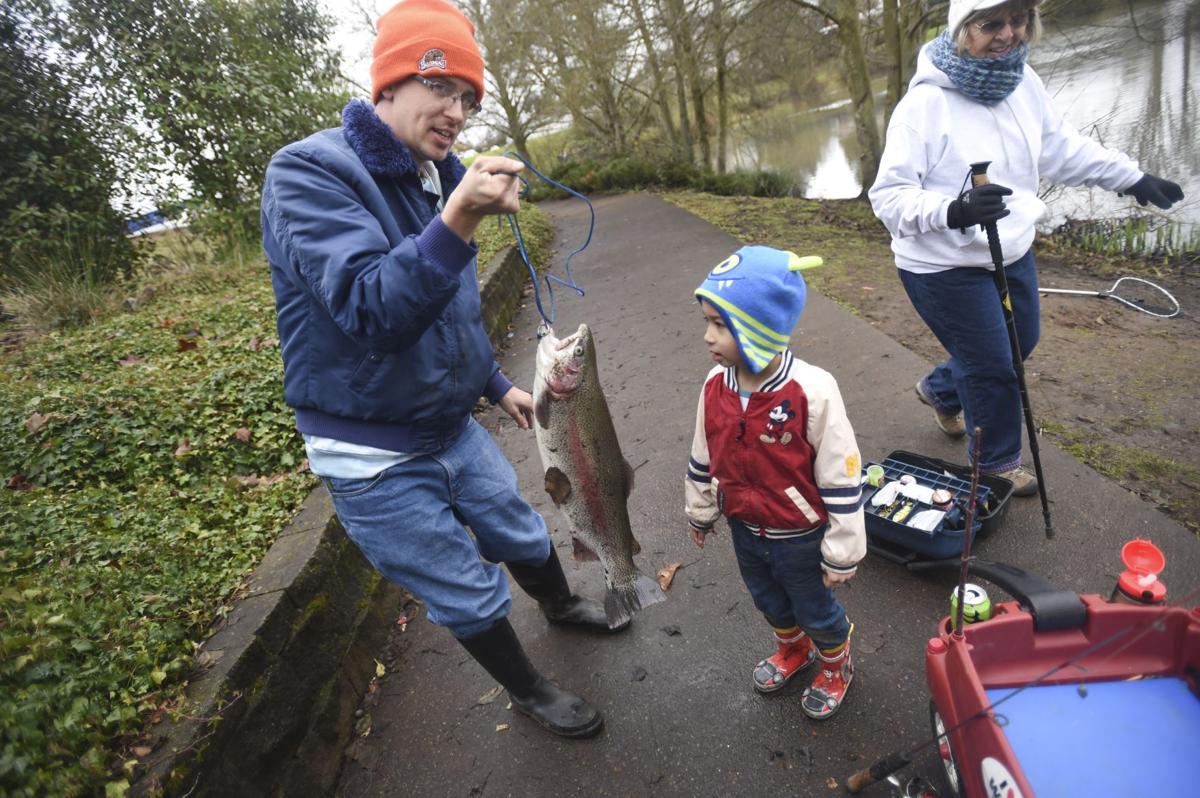 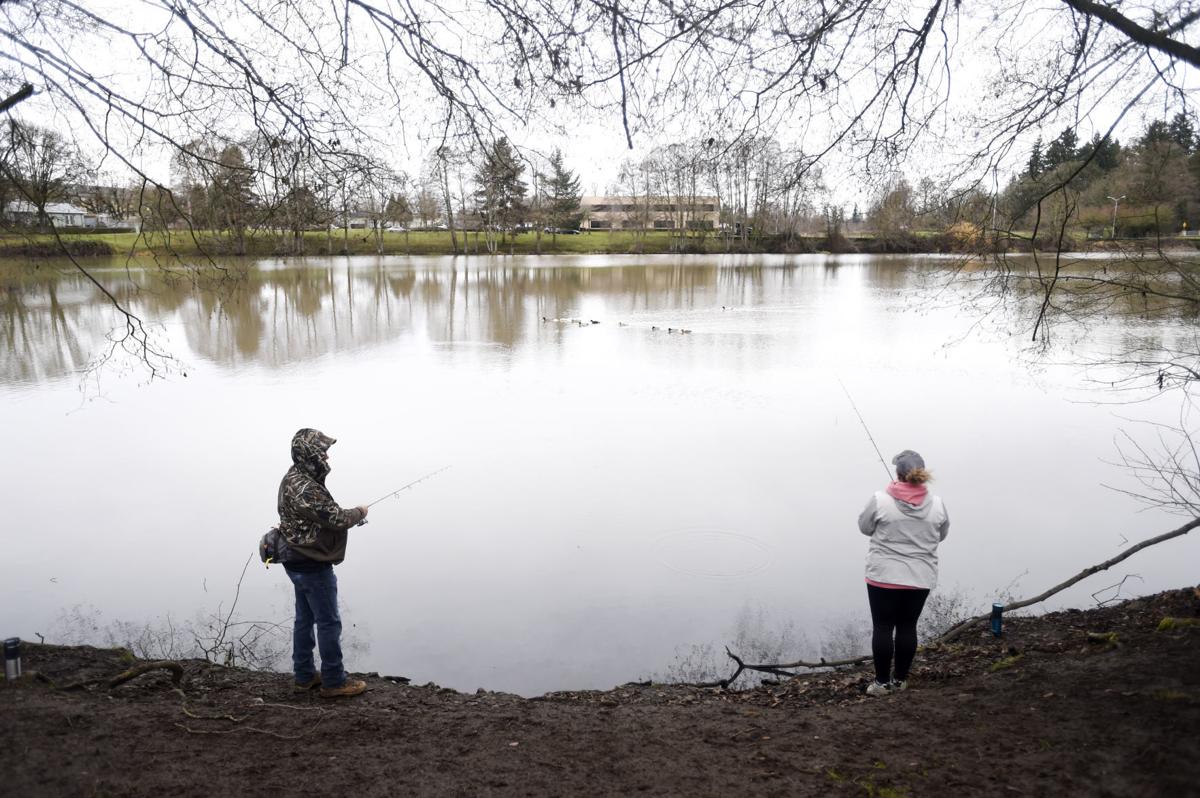 Cathy and Gary Hammer, of Albany, fish for the first time at Waverly Lake on Thursday, Dec. 28, 2017.

Waverly Lake was stocked with about 50 large-sized brood trout on Wednesday, and Thursday afternoon, aptly-named angler Mike Rivers was holding a fish he estimated at 18 inches long.

“To have a home lake like this where I can walk here, fish and walk home … I can’t ask for anything else,” the Albany resident said. The 25-year-old added that he fishes throughout the year at the pond.

Waverly Lake and nearby Timber-Linn Lake offer a bit of the outdoors within city limits. They both sit off Interstate 5, and also are in city of Albany parks, so there’s no need for a lengthy hike to find a spot to cast.

Nevertheless, these urban lakes are regularly stocked by the Oregon Department of Fish & Wildlife. Last week, about 100 trophy-sized trout were dropped in Timber-Linn Lake.

Ryan Hogan, the technician for the Roaring River Hatchery near Scio, estimated that 5,000 fish or more are placed in the two city of Albany ponds by the state each year.

“We stock Timber-Linn and Waverly quite a bit throughout the early spring,” Hogan added.

Waverly and Timber-Linn aren’t getting unusual attention from the state, however. Alex Farrant, an ODFW assistant district fish biologist in Adair Village, said that from Salem to Eugene, his agency stocks several urban ponds and lakes just outside city limits, including the Freeway Lakes east of Albany.

“We don’t want to put these fish where it would be too difficult for anglers to get to. These trout are basically raised to be caught,” Farrand said.

And that’s a great opportunity for local families to do something different without having to travel far, said Jorge Salinas, assistant city manager for the city of Albany.

“Kids can go on their bikes and experience the sport of fishing, and get fish that are legal size and sometimes large fish,” Salinas said.

ODFW shared the news about the trout arriving in Waverly Lake on Wednesday, and Salem resident Ed Waggoner was at the pond on Thursday to try out his luck. The retiree usually comes to the Albany area when lakes get stocked, or when he feels the need for a change of pace.

“I would say I come to Waverly three times a year and Timber-Linn four times a year. Freeway Lakes, once a year,” Waggoner said.

Eli Perkins of Brownsville also heard the news, and was visiting Waverly Lake for the first time on Thursday. Despite the noise from traffic, “It’s pretty nice out here,” Perkins said. “I just got off work to come here and try it out,” he added.

Skylar Garber of Lebanon was hoping to land a whopper. “Yesterday I got a bunch of bites, but nothing so far today,” he said.

After work, the Mega Foods employee sometimes heads to Waverly or other nearby ponds to fish. On Tuesday, he caught a 25-inch trout at Timber-Linn.

“We’re pretty fortunate. A lot of states, you don’t have these types of opportunities,” Garber said.

Hogan grew up in Albany during the 1990s and fished regularly at Waverly and Timber-Linn. He doesn’t have any fish tales of massive creatures he hauled out of the lakes, however. “Usually just some legal sized trout. But it’s lots of fun,” he added.

The Oregon Department of Fish & Wildlife is stocking Albany's Waverly Lake this week with 1,000 legal-sized and 100 trophy-sized trout.

Cathy and Gary Hammer, of Albany, fish for the first time at Waverly Lake on Thursday, December 28.

Cathy and Gary Hammer, of Albany, fish for the first time at Waverly Lake on Thursday, Dec. 28, 2017.