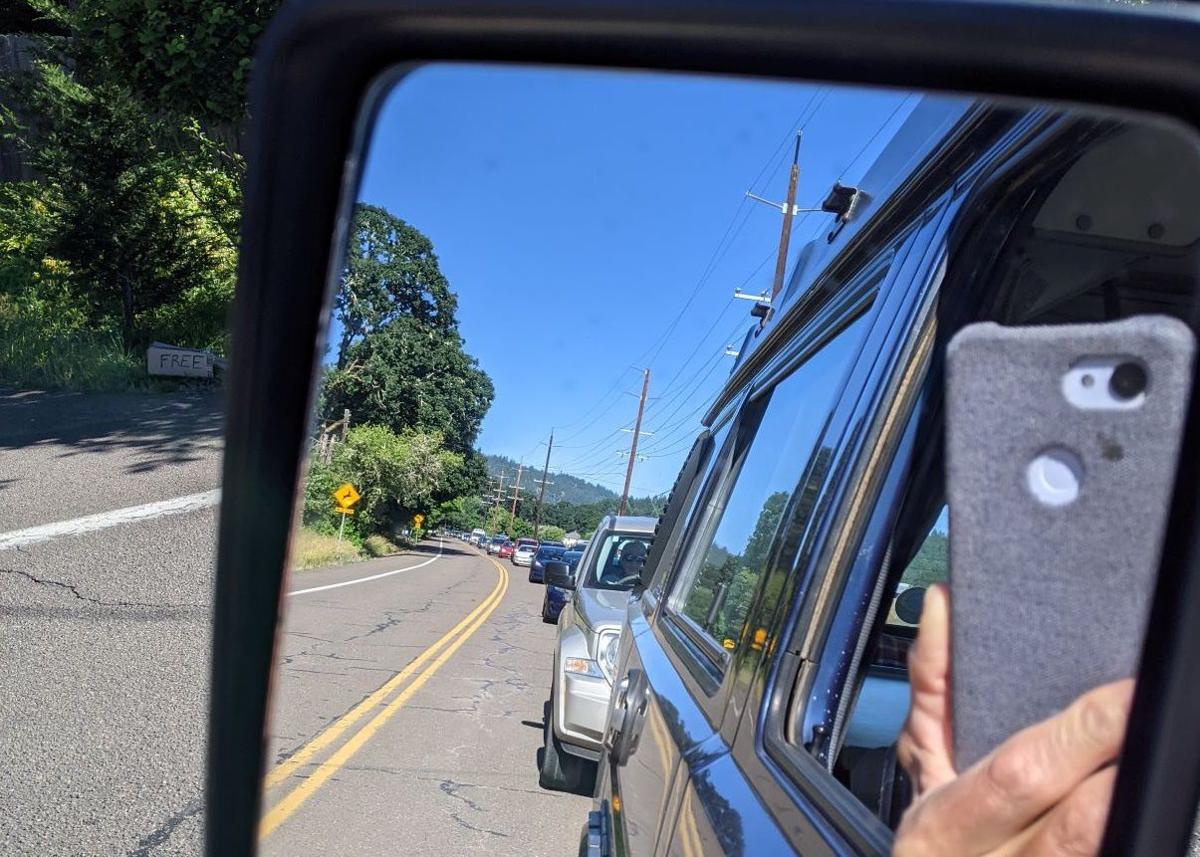 A line of cars can be seen on 53rd Street on June 19 during a fire evacuation exercise. 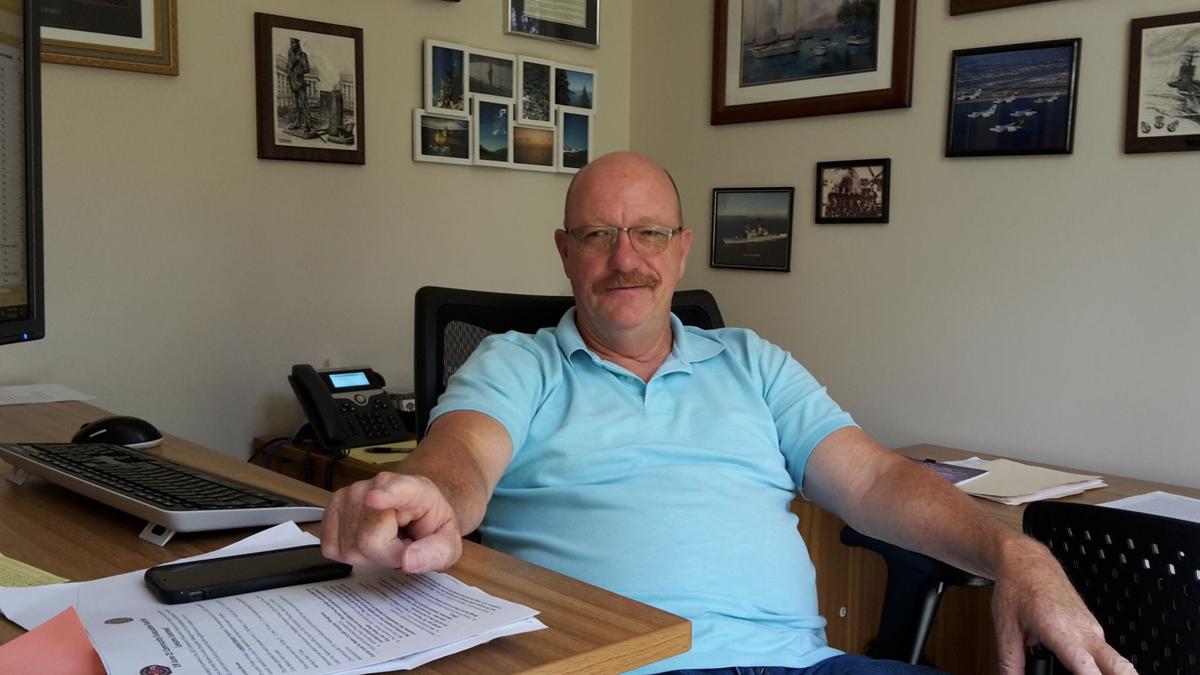 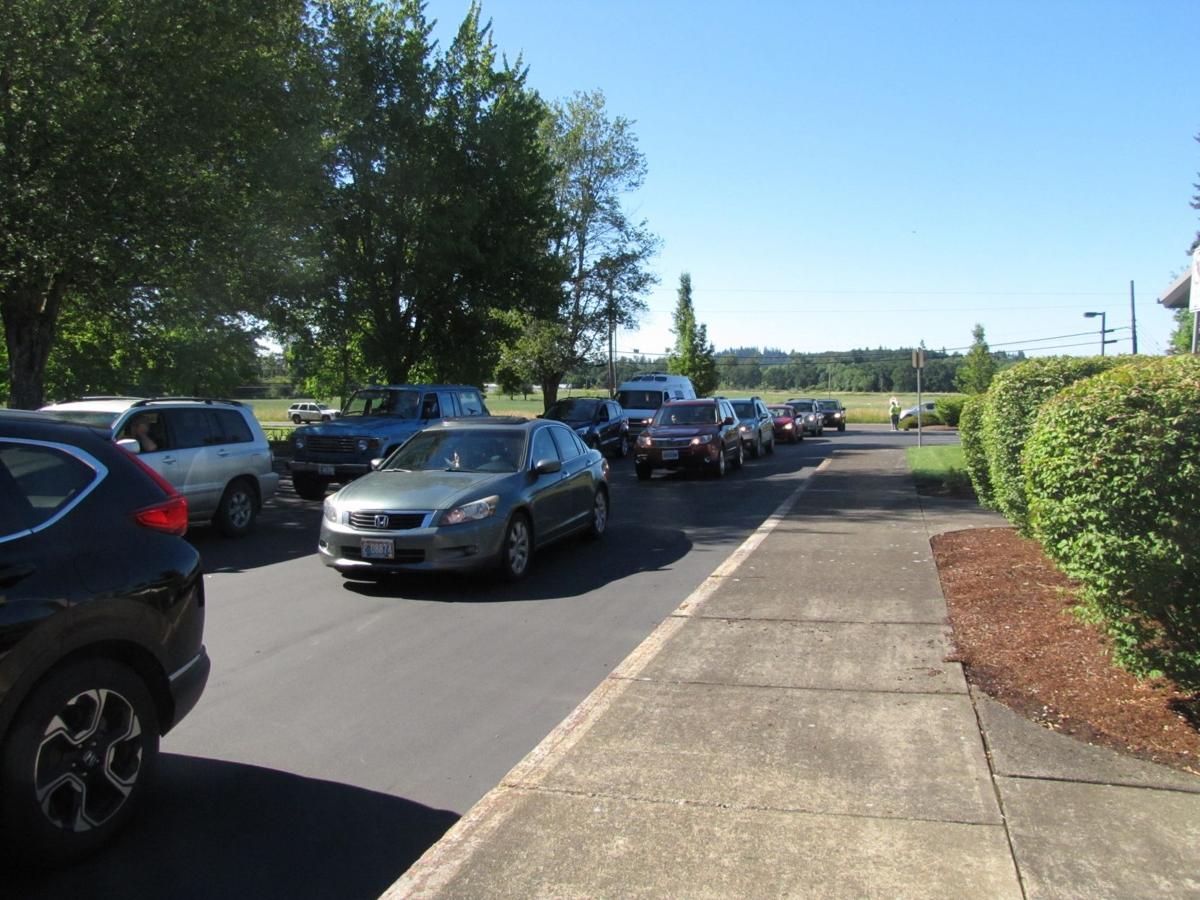 Here is a look at the line of cars entering the Church of Jesus Christ of Latter-day Saints on Harrison Boulevard. The church was one of two used in the June 19 evacuation exercise. 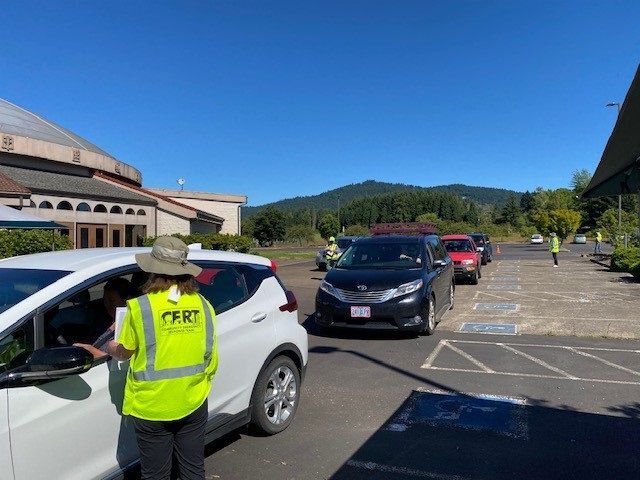 Volunteers direct traffic at the Life Community Church during the June 19 fire evacuation exercise in Corvallis and Benton County.

In 2019, officials put together a fire exercise in one Corvallis neighborhood and organized an active shooter drill at Crescent Valley High School. Plans for exercises in 2020 were put on hold by the pandemic.

But last month’s event was easily the broadest in scope, involving nine neighborhoods in Corvallis and Benton County.

The premise was simple. Neighborhoods signed up to participate, were briefed by emergency officials… and then everyone waited for the alert to hit their phones.

Approximately half the evacuees were assigned to travel to the Church of Jesus Christ of Latter-day Saints on Harrison Boulevard, with the remainder heading to the Life Community Church on Highway 99 north of town.

“The exercise went well and we learned some good things,” said Dave Busby, a chief emergency planner for Corvallis who is a member of the Corvallis Fire Department.

The good news is that everyone got to their evacuation points in less than 20 minutes. The fastest was the well-organized Skyline West neighborhood, which got all of its people to the LDS church in 13 minutes. The CoHo Village in South Corvallis took 18 minutes, but in fairness its residents had the longest distance to travel.

There were bottlenecks on 53rd Street as people scurried toward the LDS church. Bryan Lee, who leads the Benton County emergency planning effort for the Sheriff’s Office, was on hand at the church.

“One of the most immediate things that was apparent was the level of participation,” he said. “We had a huge flow at the LDS church, but we were able to change the lane configuration on the fly. That was a good thing.”

Busby also noted that one of the key lessons going forward is to continue to hammer on the meaning of the alert levels.

“We have a lot more to do there,” Busby said. “What do the alert levels mean? More community awareness is needed.”

Just signing up people to correctly receive the alerts posed a challenge. Because of a phone error alerts were sent to a number in Minnesota.

A total of 459 people evacuated in 358 vehicles. But one of the key numbers for Busby and his organizers is the 165 pets that wound up at the two churches. There were 40 to 50 horses and three blind pigs (we are not making this up), plus ducks, goats and dogs.

“What this should tell community members is that you need to have a pet plan in addition to a people plan," Busby said.

Busby noted that families need to have food, a carrier, leashes, pictures of and meds for their animals.

Along the way Busby, Lee and other emergency officials also had to cope with some false premises.

“Too many people think you only need to be worried about fire in rural areas,” Busby said. “Everybody has to be ready for a wildfire. That is absolutely essential. This is a scary topic. If I ever have to direct one for real it’s going to be emotional, it’s going to be a challenge.”

Lee and Busy also noted the need for folks to improvise if needed, particularly on their routes out of the neighborhood.

“If you know of a traffic chokepoint leave early,” Lee said. “People always want us to tell them what route to take. We aren’t always going to know that.”

“We really emphasize that people need to establish their own evacuation routes,” Busby said.

The crew required for the exercise was relatively small, a handful of Corvallis and county employees, along with about six American Red Cross volunteers and 12 Community Emergency Response Team (CERT) volunteers.

The budget for the event, not counting salaries of the municipal employees, was $200, with the money paying for water and snacks.

Here is a look at the system used to alert residents in emergencies:

LEVEL 1: BE READY for eventual evacuation. Prepare, monitor, and pack your valuables.

LEVEL 2: BE SET to evacuate at a moment’s notice.

Corvallis emergency planning manager Dave Busby will discuss preparing for a wildfire emergency at a virtual event from noon to 1 p.m. Wednesday. Busby will be accompanied by a National Weather Service official from the Portland office. To register for the event go to https://bit.ly/redflagwarningevent. Anyone registered will receive a link to a video recording of the event approximately 24 hours after it has ended. The event is sponsored by the Corvallis-Benton County Public Library, the Oregon State University Extension Service, the Corvallis Sustainability Coalition and the Greenbelt Land Trust.

How risky is it to live in your community? What are the biggest natural hazards that you face? And how prepared is your region to respond to s…

An emergency preparedness evacuation exercise is set for Saturday in the Skyline West neighborhood in northwest Corvallis.

Weeks before the end of federal unemployment benefit programs on Sept. 4, Oregon Employment Department officials have shifted their efforts to…

The city of Corvallis is setting up its own Certified Community Response Team.

A line of cars can be seen on 53rd Street on June 19 during a fire evacuation exercise.

Here is a look at the line of cars entering the Church of Jesus Christ of Latter-day Saints on Harrison Boulevard. The church was one of two used in the June 19 evacuation exercise.

Volunteers direct traffic at the Life Community Church during the June 19 fire evacuation exercise in Corvallis and Benton County.