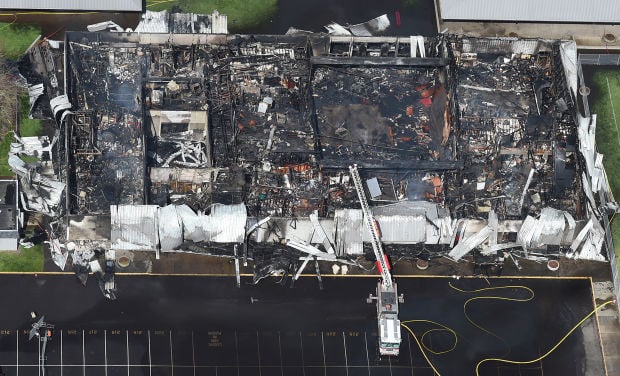 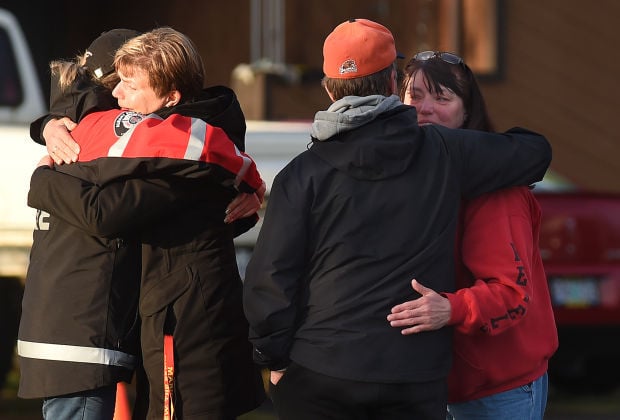 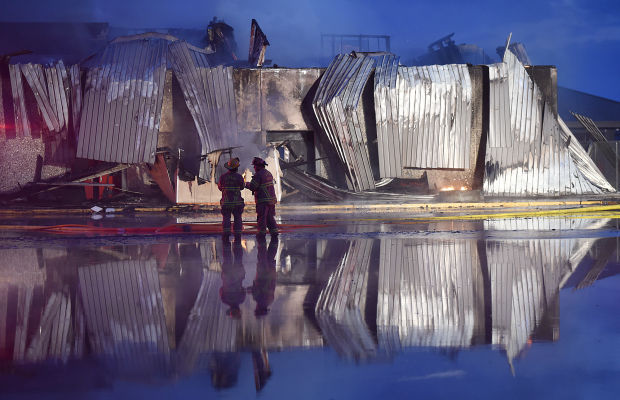 Firefighters watch the smoldering building at South Albany High School on April 1 after a fire destroyed the school’s choir, band, home economics and child development classrooms, storage and meeting spaces for dance, cheerleading and Leadership, along with the kitchen and cafeteria. 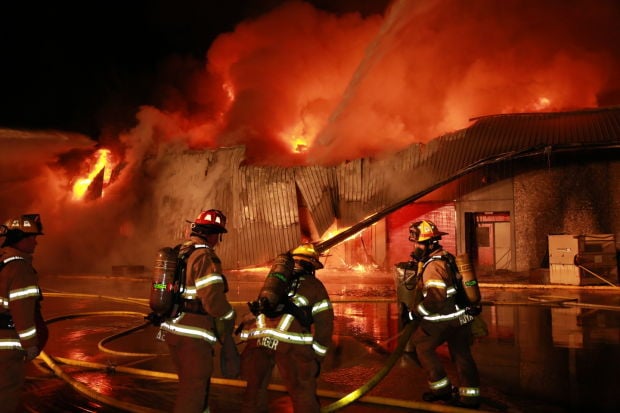 Jason Guilford was on his way to work as a log truck driver in Independence about 3:15 a.m. Wednesday when he saw “flames about 6 feet high” coming out of the South Albany High School cafeteria.

Guilford, who was a Linn County Sheriff’s Office deputy for 12 years, called 911 and said his first thought was that “someone started the fire, but I didn’t see anyone in the area. I figured it might be someone who did something stupid.”

Guilford said he lives close to the school and initially thought something on a wall was burning.

“Now, though, it looks like it was actually the flames coming from the inside,” Guilford said.

Nearly 70 firefighters from throughout the mid-valley responded to the four-alarm blaze that destroyed the 40,000-square-foot cafeteria, kitchen, band and choir rooms that were built in 1971.

Determining the exact cause of the fire may be difficult due to the unstable condition of the remaining structure, which is making it unsafe for fire officials to make their inspections, according to Wanda Omdahl, Albany Fire Department spokeswoman.

“A structural engineer went through the building Wednesday afternoon and before they can determine the stability of what’s left, metal and other fallen debris will have to be moved,” Omdahl said. “We hope to get in today (Thursday), but if the building’s not safe, it may not be until Friday.”

In addition to numerous engines and water trucks, at one point there were three ladder units in the air, two from Albany and one from Corvallis.

Medic units also were on scene and fortunately, there were no injuries.

Classes were cancelled for Wednesday and Thursday, and Friday was a scheduled in-service day, so students will not have to report back to classes until Monday.

Students are invited to visit with a counselor at a “safe room” that will be available from 8 a.m. until 2 p.m. today in Building 11, the technology building.

In addition to feeding about 700 of the 1,300 South Albany students on an average day, the school’s kitchen also prepares meals for Waverly, Oak, Clover Ridge, Lafayette, Sunrise, South Shore and Periwinkle elementary schools.

Also, meals for the Boys and Girls Club and three community after-school program sites are prepared in the South Albany kitchen.

“The sad thing is that all of the commodities for the school district are in my building,” said cook manager Lauri Robinson. “This is insane. I just can’t believe this.”

The Boys and Girls Club received 350 lunches from Greater Albany Public Schools and will be covered again on Thursday.

A complete list of damaged equipment isn’t yet known, but the building also held dance, cheer, prom and Leadership supplies. Head cheer coach Courtney Marstall said her team lost its practice classroom and all of its mats and may organize a fundraiser to replace them.

All events scheduled for the day, including a track meet, were postponed.

The Albany Public Schools Foundation is setting up a fund for donations for affected programs. The Foundation will give 100 percent of all donations to the school. Call 541-979-2773 or email the foundation’s development director at aimee@albanypsf.org.

Early in the day, a GoFundMe website solicited funds for the school, but was taken down. The Albany Public Schools Foundation is handling all donation efforts.

New Gov. Kate Brown spent about an hour at the school and spoke with firefighters, school staff and students.

She said the state is prepared to assist if needed.

“The destruction is horrible and will certainly affect the community, but they will rebuild and survive,” Brown said.

As expected, students were in shock, many waking up, learning of the event and thinking it was an April Fool’s Day joke.

Nearly 100 students and adults gathered at the center of the South Albany football field at noon to share their feelings and to pray for their school and community.

Linn County Commissioner Roger Nyquist visited the school and said the county has offered the use of the Linn County Fair & Expo Center to the school district.

Nyquist said there is plenty of room for classes and activities, and it also has a commercial-grade kitchen.

The Hub City Church, which meets at South, also was affected by the fire.

The church held its first service in the school cafeteria on Sunday and lost new guitars, amplifiers, an electric piano, drum kit, keyboard, sound board and sound system.

Pastor Nathan Riley said the equipment is insured and suggests all donations go to the school and not the church.

Man convicted in Scio arsons is arrested for Albany fires

A 28-year-old Albany man, who in November had been sentenced to five years probation for a series of arson fires in Scio, was arrested Wednesd…

Aerial of the South Albany Cafeteria

Aerial of the aftermath after a fire destroyed the building that housed the South Albany cafeteria Wednesday April 1, 2015.

Firefighters use ladder trucks from Corvallis, Lebanon and Albany in fighting a 4-alarm fire at South Albany High School.

VIDEO: See what it's like to fight fire from 95 feet in the air with FF Kyle Robertson and BC Ron Sipe on Truck 31

Submit your photos and view photos

Did you take photos at the scene of the fire at South Albany High School? You can submit your photos here to be included in this community album.

Drummer Deen Castronovo of Journey heard about Wednesday's fire at South Albany High School through a text from a friend and fellow Oregonian.…

Brett DeYoung's choir students at South Albany High School had already applied to perform at the state competition this spring. Their entry vi…

Firefighters watch the smoldering building at South Albany High School on April 1 after a fire destroyed the school’s choir, band, home economics and child development classrooms, storage and meeting spaces for dance, cheerleading and Leadership, along with the kitchen and cafeteria.