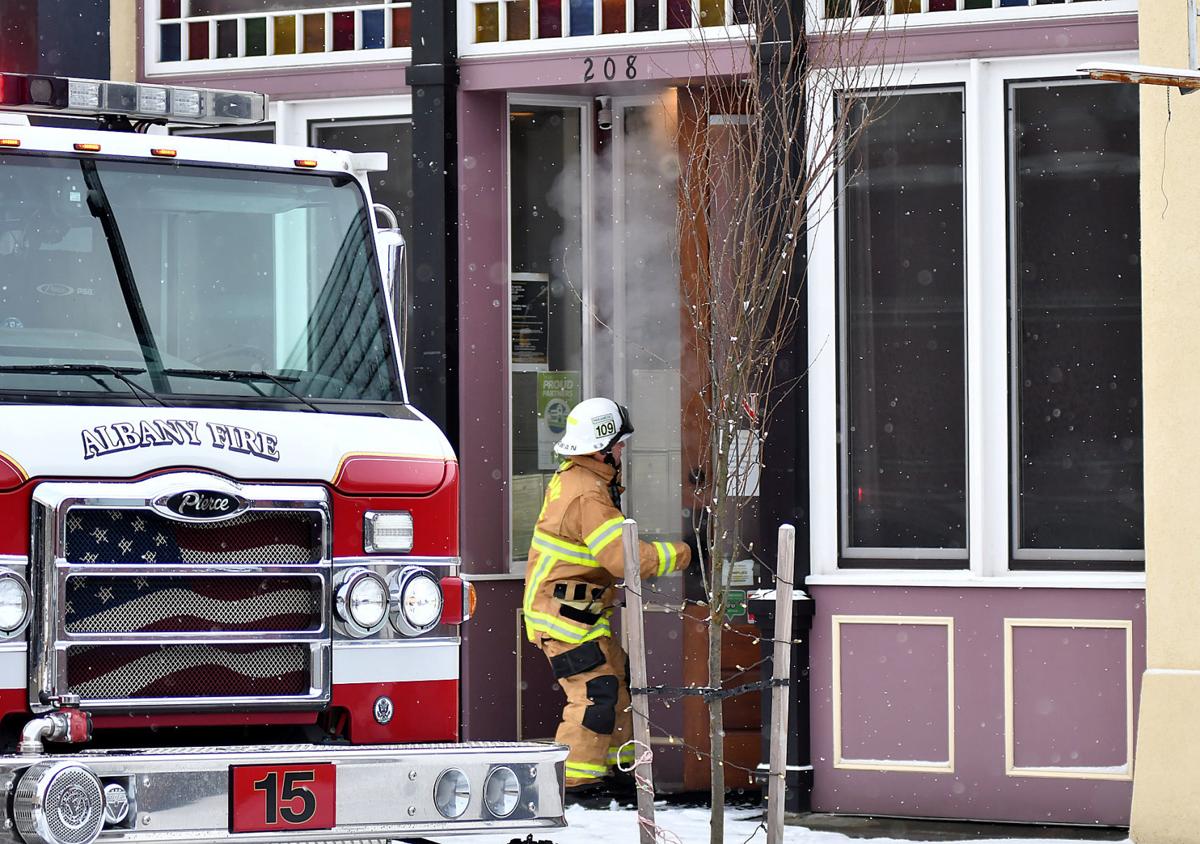 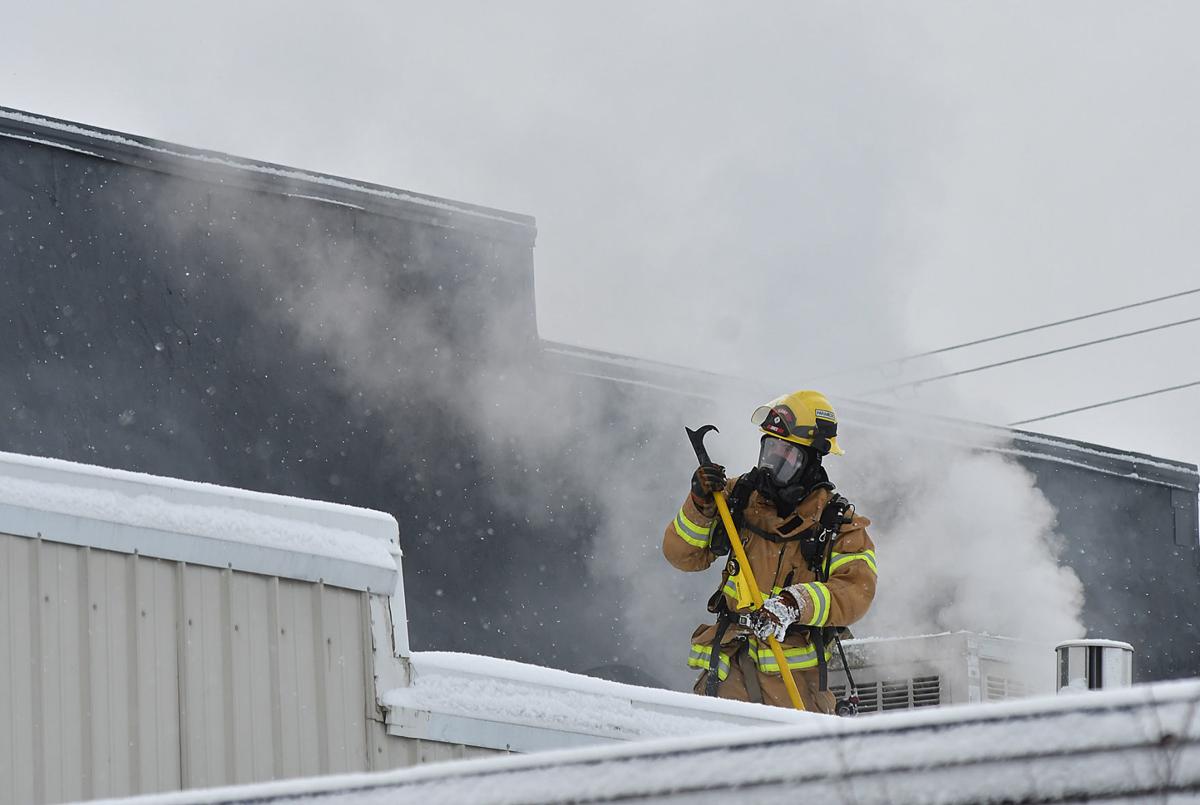 An Albany firefighter inspects the roof at Novak's while searching for the fire's source in February. 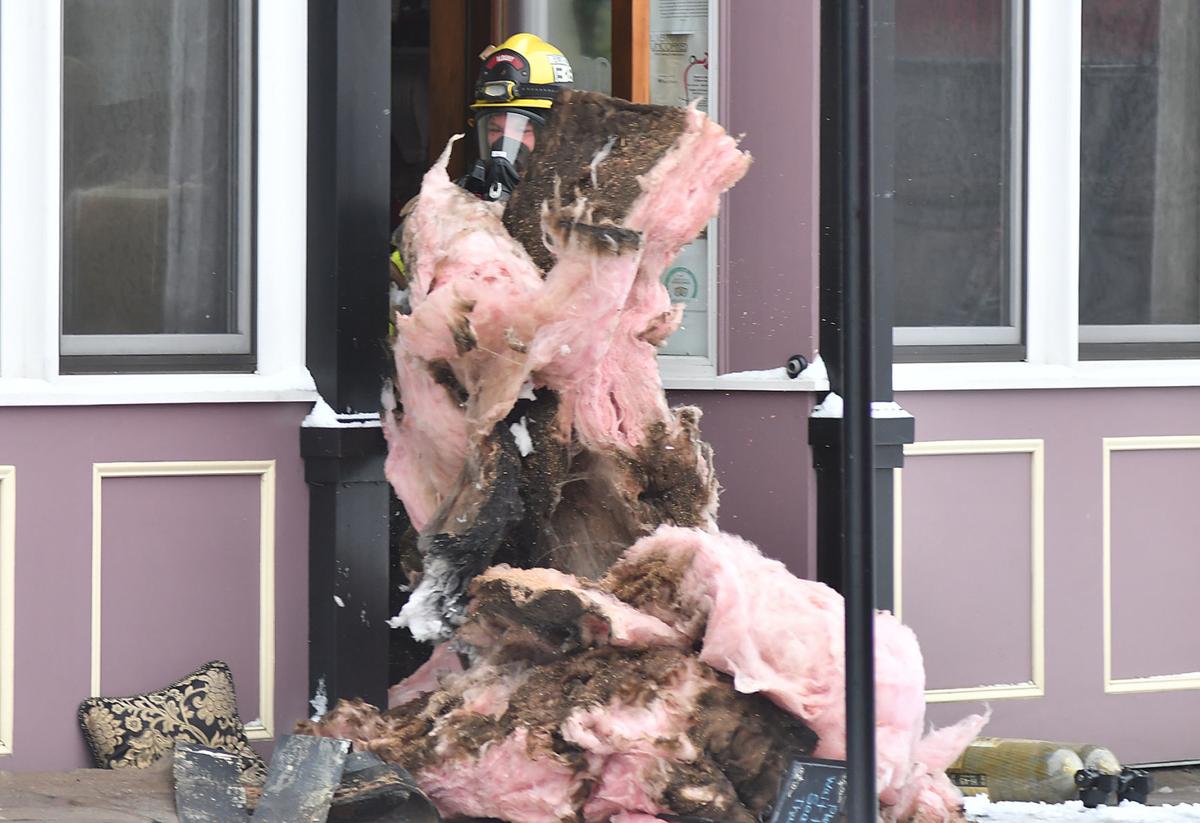 An Albany firefighter removes insulation during a search Wednesday morning for the source of a fire at Novak's Hungarian Restaurant.

Crews from Tangent, Jefferson, Corvallis, Philomath and Adair assisted at the scene.

Although the cause of the fire was unknown Wednesday afternoon, Fire Department spokeswoman Sandy Roberts said the fire is believed to have started in the basement of the building.

Restaurant owner Karen Novak said an investigator told her he thought the fire was electrical in nature. "They're going to be looking into it further," she said.

Novak said that in a best-case scenario, her family's eatery could reopen in two or three weeks.

"The restaurant is still standing. We're only missing a chunk of floor. There's definitely room for improvement, but things could have been a whole lot worse," she added.

"There was a lot of smoke. It's really stinky in here," Novak said.

Roberts said the second alarm was called after the source of the fire could not be located immediately.

“We got here and there was a lot of smoke,” Roberts said. “It was full of smoke. We also had to work in Margin Coffee to make sure the smoke wasn’t coming from there.”

Fire crews pulled up walls and flooring inside Novak's to try to find the fire, Roberts said.

She added that the incident was intensified because numerous buildings share common walls and there are three businesses in a row that have kitchens in them and potential flammable sources.

Jon Eick, manager of Margin Coffee, said two apartment businesses above Margin and a building to the east of it were evacuated.

"There's a little bit of a smell of smoke, but we didn't have any smoke damage. We'll be back up and operating tomorrow," Eick said Wednesday afternoon.

Margin Coffee is scheduled to host a Coffee with a Cop event with the Albany Police Department from 9 to 11 a.m. on Thursday.

On Wednesday morning, the Police Department was directing traffic off of Ellsworth Street onto First Avenue to allow the Fire Department access to hydrants and keep motorists out of the way of emergency workers.

Novak discovered the fire when she arrived for work. “We were going to open an hour late. I opened the back door and all this smoke came out,” Novak said.

She went inside to check for flames but ran out after a few seconds because she couldn’t breathe.

Novak worried about photographs, family decorations and other items inside the family restaurant.

"Hopefully they're just smoky and not ruined," Novak said. “Things happen for a reason. God’s in control. Not me.”

On the restaurant’s social media page, it was noted that prayers were appreciated and that everyone was safe.

Margin Coffee also was scheduled to open late due to snow, and when Eick arrived firetrucks were already on scene.

“It sounds like the fire could have been going for quite a while. If we were open earlier, maybe we would have discovered it earlier,” he said.

Roberts thought the snow had actually been to firefighters’ benefit as it kept much of the traffic away from downtown Albany on what would normally be a bustling morning.

Margin owner Gabe Anderson said that Monday was one of his coffee shop’s busiest days despite a snowstorm. Still, he wasn’t thinking about the loss of customers on Wednesday morning.

“It’s less in my mind that this is a setback, and more that everyone’s safe,” Anderson added.

Novak’s has been a fixture in Albany since Joe and Matilda Novak opened their first restaurant in 1984 on Santiam Highway.

The two came to the United States after escaping from communist Hungary in 1957. Joseph Novak died in January 2018.

The family moved the restaurant into its downtown location in 2015 after 12 years at 2036 Heritage Way, downsizing from 4,800-square-feet to about 2,700-square-feet.

Novak’s is the only Hungarian restaurant in Oregon and one of 19 nationwide.

Their new building is more than 100 years old and originally housed Broeder’s Meat Market. The remodeling project included bringing the façade back to its original look. The interior of the building includes murals painted by family members.

B and W Builders of Lebanon handled the remodel.

Kyle Odegard and Alex Paul contributed to this report.

Novak's set to reopen in downtown Albany in 'August-ish'

Novak’s Hungarian Restaurant has been closed since a Feb. 27 fire caused heavy smoke damage, but the Albany business is set to reopen in “Augu…

Novak’s Hungarian Restaurant in downtown Albany closed due to a fire that caused heavy smoke damage in February 2019. But mid-Willamette Valle…

An Albany firefighter inspects the roof at Novak's while searching for the fire's source in February.

An Albany firefighter removes insulation during a search Wednesday morning for the source of a fire at Novak's Hungarian Restaurant.

Crews from Tangent, Jefferson, Corvallis, Philomath and Adair assisted at the scene.