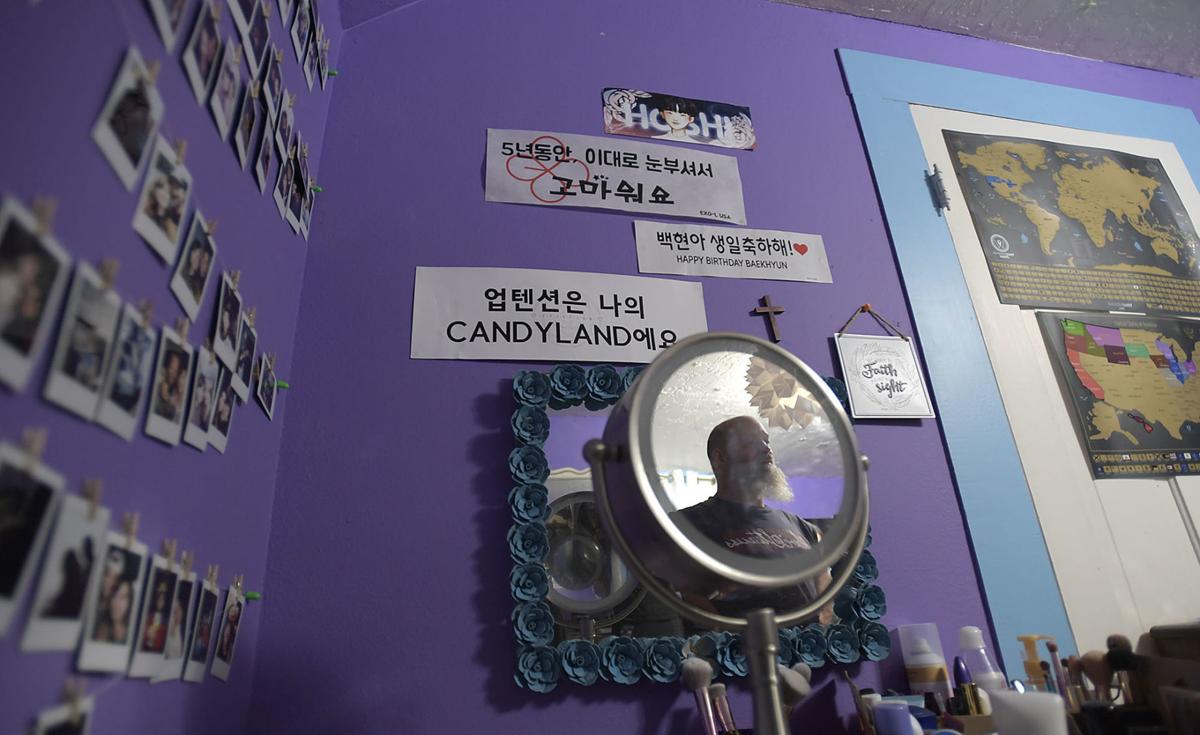 Ernie Kropf, reflected in a mirror, looks around his daughter Ashley's room, decorated with dozens of selfies, Korean words and maps showing states and countries she had visited. Ashley Kropf died Tuesday in a single-vehicle crash while delivering mail south of Corvallis. 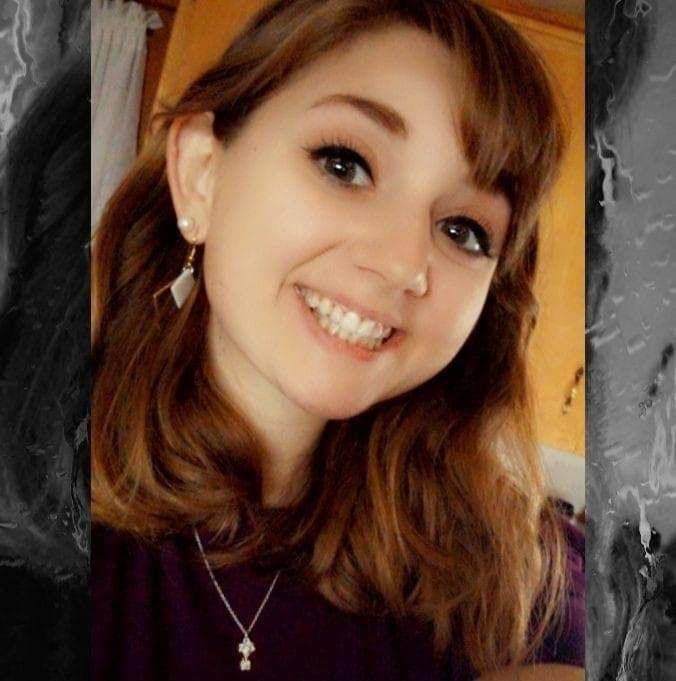 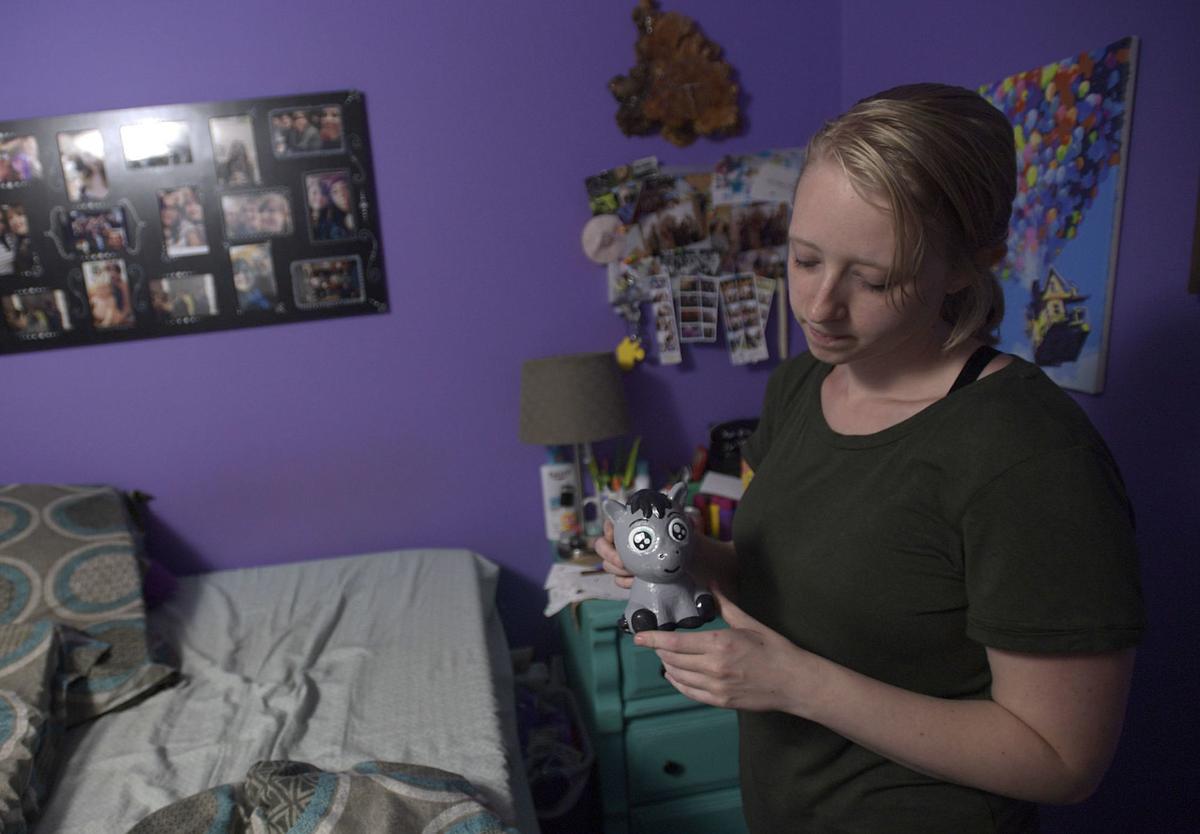 Stephanie Kemper shows a creature that her sister, Ashley Kropf, created after finding a severely damaged toy in a store parking lot. 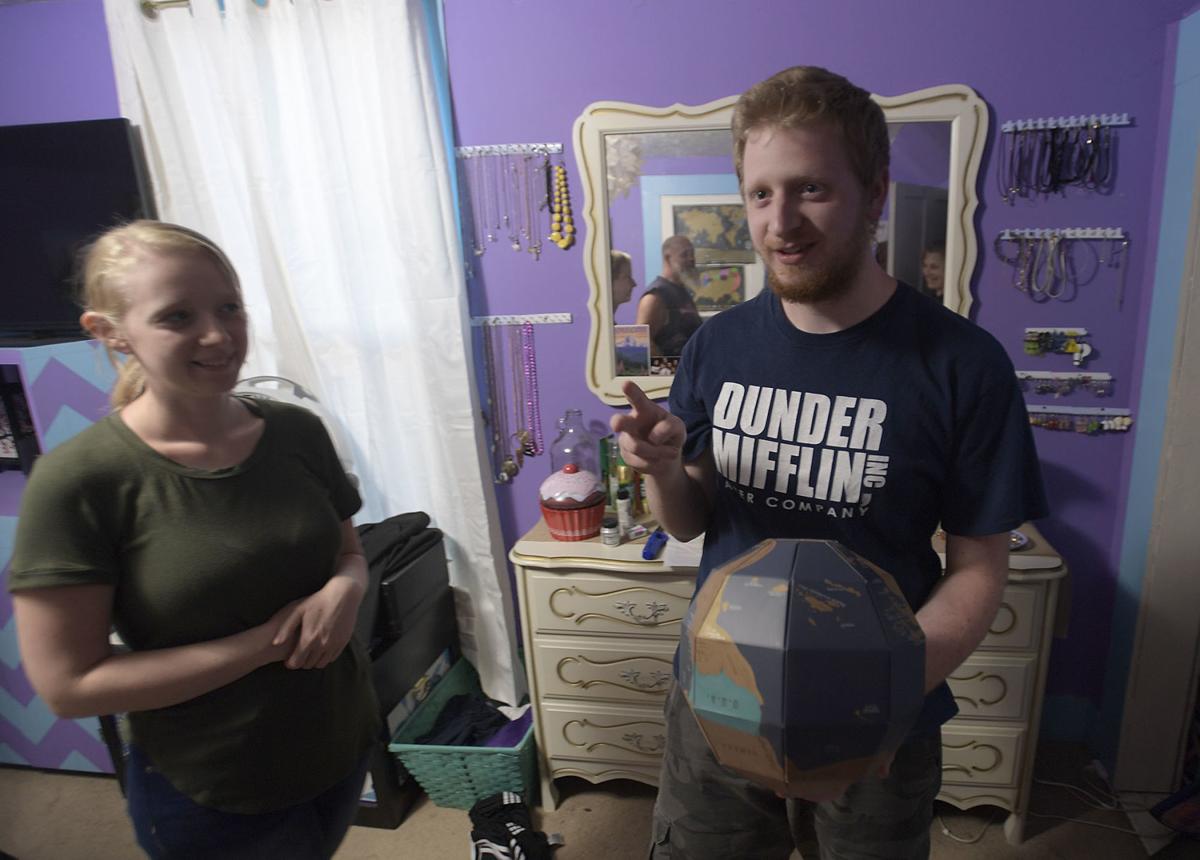 HALSEY — She had an infectious smile and an artistic streak, loved to travel and, above all, had a passion for sharing her faith.

That’s how family members describe the young woman who was killed on Monday in a rollover crash south of Corvallis.

Ashley Kropf, 23, died while delivering mail as a substitute rural letter carrier. The 1990 Nissan station wagon she was operating crossed the centerline of Llewellyn Road went off the side of the road and overturned. Family members don’t believe she was wearing a seat belt.

“From what I understand, the USPS has a policy that they do not require their drivers to wear seat belts because they lean out the cars constantly in order to get mail out of the mailboxes and put mail in the boxes,” said Alvie Shrock, Ashley’s uncle.

Kropf, who still lived in the Halsey-area farmhouse where she was raised, started her job as a part-time rural mail carrier a year ago, said her father, Ernie Kropf.  She previously had jobs at the Pioneer Villa, Safeway and the Dairy Mart in Brownsville.

In between her jobs, she traveled. One trip took her to Hawaii to visit a cousin serving on a Christian mission. Kropf immediately signed up for the same program, Youth With a Mission, and returned to the Big Island for  three months of service.

“She would talk for hours about it,” said Mikala Shrock, the cousin she had visited in Hawaii. “By going she gained so much confidence in who she was, who she was in Christ. I think everyone could see the difference when she came back. She was way less shy and so much more outspoken about her faith. She was so excited to tell people about Jesus.”

After she returned from Hawaii, her daily routine included early morning devotionals on the farmhouse sofa. “She would be listening to her Bible on her phone and writing in her journal, drinking coffee,” said her father, Ernie.

Kropf would leave the house around 6 to work one of a half-dozen mail routes on a fill-in basis. Though it was initially supposed to be a part-time job, it kept her busy sometimes as much as six days a week, her father said. Some days she wouldn't come home until 10 pm.

Rural routes she covered included Sweet Home, Shedd and Albany, but the main route she worked was South of Corvallis along Highway 99W.

When she was not at work, she could be found in Albany helping Spanish speakers learn English or participating in young adult activities at the Hope Church.

“I wanted to learn how to pray better, and she wanted a church that felt like home,” said her sister, Stephanie Kemper. “So we randomly chose it, and we sat down in the pews and there was a little card. It said, ‘Welcome home.' And the preacher said, 'We are starting a series all about prayer.' And that's how we knew we were home.”

“She always modeled what it meant to love and value others over yourself,” said Khalil Burton, the pastor of students at Hope Church.

The young adult group at Hope Church plans to have a private session talking through the grief of losing Ashley on Thursday evening.

Kropf was home-schooled and graduated from high school at 16 years old, said her mother, Barbara. After graduation, her love of learning continued. She learned Korean fluently enough to carry on conversations while visiting with native speakers, both on her Hawaii mission trip and on a vacation to Korea with some of her cousins and friends.

She taught herself to make intricate paper flowers that her sister used at her wedding, painted pictures that adorned her walls and refinished furniture in her room.

“She had a big, huge smile ... that just won everybody. And a contagious laugh,” Alvie Shrock said.

She was also known for her sense of humor. When Stephanie confided that she was pregnant, Ashley kept the secret but wrote facts about her sister’s pregnancy on the family blackboard in Korean.

On Sunday, Ashley gathered with her family to celebrate her niece Vivian’s third birthday. She spent the day visiting and taking pictures, including a photo of a butterfly she posted on social media.

“Her dream job was to take pictures for National Geographic,” her mother said.

Tuesday evening, as family members including Ashley’s parents Ernie and Barbara, brother Colton and sister Stephanie gathered at the family home, they strolled up to her bedroom to look at Ashley’s artwork, her eclectic collection of earrings and various crafts that filled her room.

Above her bed and on each side of her room are collages of selfies taken by Ashley with just one other family member or friend in each pose. Many of these images are currently being used as Facebook profile pictures on these loved ones' sites.

She started taking these selfies after a Thanksgiving gathering in 2012, according to a blog post she wrote called “A Joyful Heart.”

“All day I felt something in my heart telling me, ‘Go take a picture with (Uncle) Tebo’ … but I was very shy and I was too embarrassed to ask for a photo with him,” Ashley wrote in her April 2019 blog post.

“I looked everywhere I could think of trying to find a picture of us, but I failed,” Ashley wrote. “After that day I didn’t want to miss anymore last chances. I started taking pictures with my family every chance I got.”

“From that point on she would always come over and get a selfie with you,” said Alvie Shrock about his niece. “She was taking pictures for her memories, and she was making memories for us.”

Some information was incorrect in the original version of the story. The information of Ashley Kropf's place of employment in Brownsville and length of her Christian Mission trip was incorrect.  That information has been corrected in the online article.

Ernie Kropf, reflected in a mirror, looks around his daughter Ashley's room, decorated with dozens of selfies, Korean words and maps showing states and countries she had visited. Ashley Kropf died Tuesday in a single-vehicle crash while delivering mail south of Corvallis.

Stephanie Kemper shows a creature that her sister, Ashley Kropf, created after finding a severely damaged toy in a store parking lot.