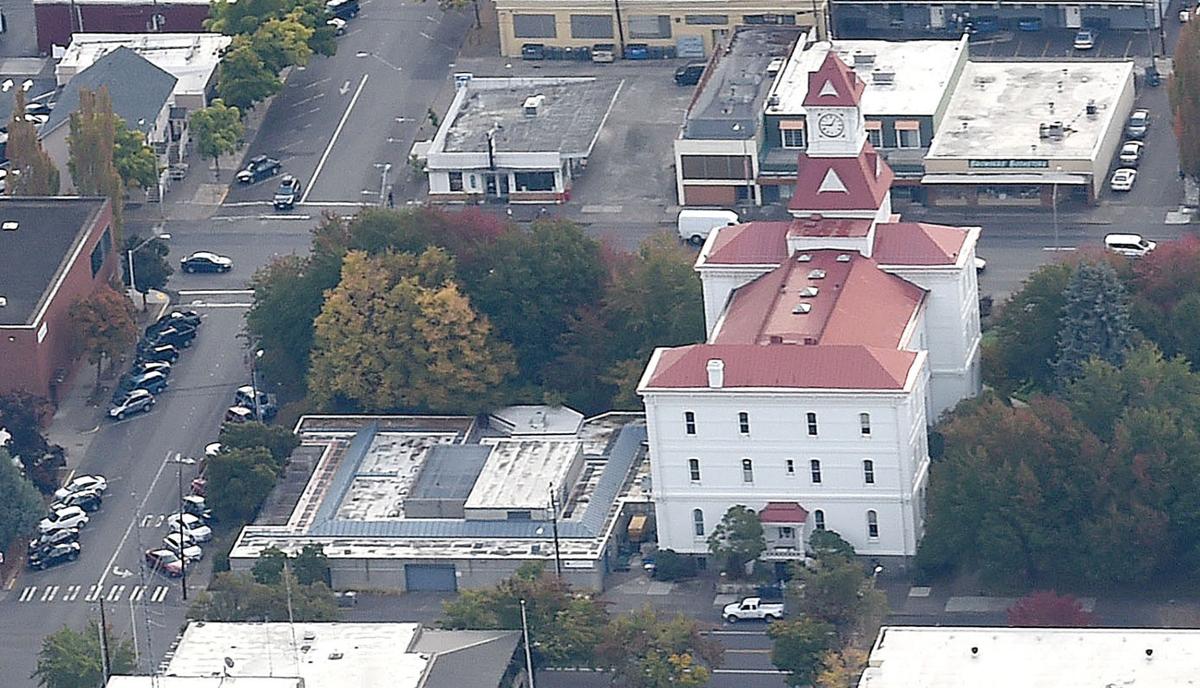 Benton County residents will be voting this month on whether to continue to pay for renting jail beds in another county to bolster the capacity of the current 40-bed structure next to the Benton County Courthouse (at lower left in photo) in downtown Corvallis. Measure 2-130 would also pay for a wide range of other public safety, health and corrections services. 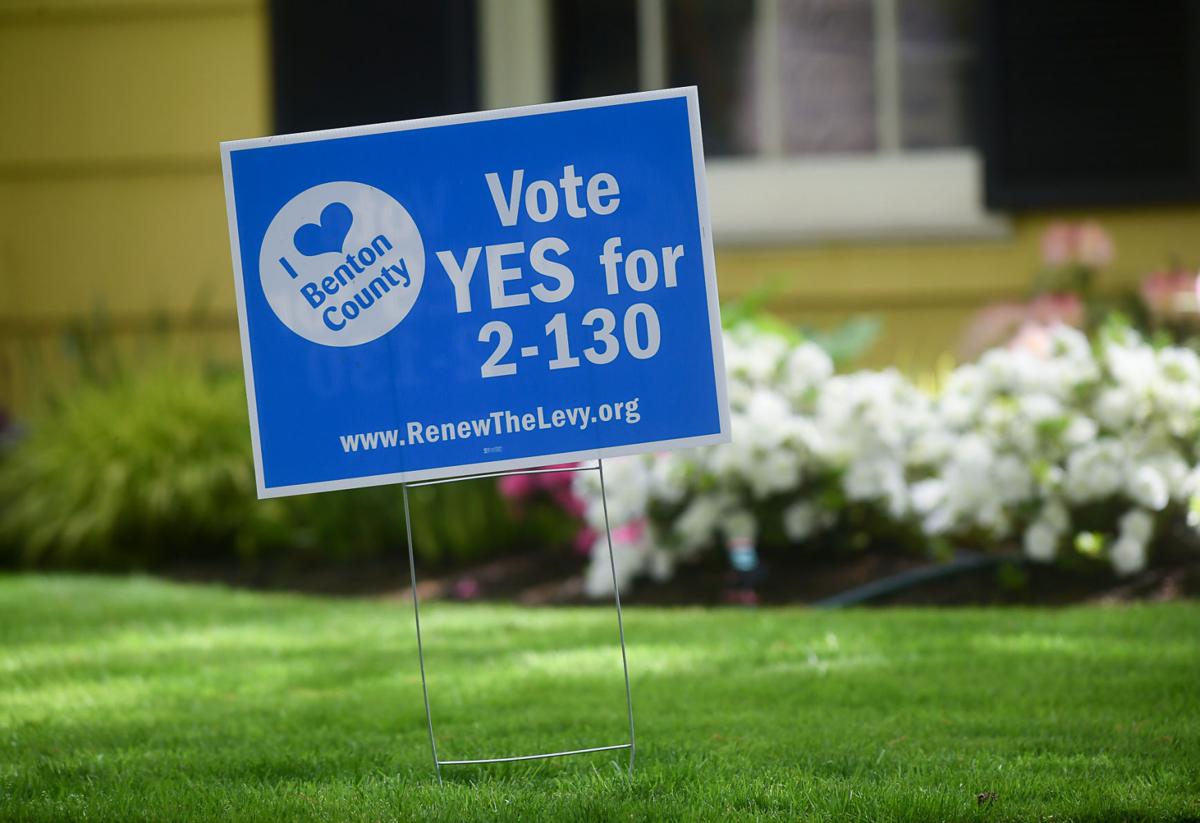 Measure 2-130, the renewal of Benton County's public safety and health levy, is on the ballot May 18. Levy backers are spending approximately $9,000 on the campaign.

Benton County is taking a public safety and health levy to the voters for the sixth time.

Measure 2-130, if approved by the voters May 18, would raise $11 million per year over five years for a wide range of services, including sheriff patrols, jail beds and mental health.

The rate has remained the same from previous levies, which Benton County Commissioner Xan Augerot said have been necessary because of property tax limitations imposed by state initiative measures dating back to the 1990s.

“It’s impossible to live within those constraints and provide the services the community wants," she said. "We're not alone. Other communities use this method, too.”

Which might pose a challenge for Measure 2-130. The Corvallis School District also has a levy in progress, and voters passed a $200 million school facilities bond in 2018. County voters passed a new taxing district for 911 emergency dispatch service in 2019. Corvallis, meanwhile, has its own levy in place and increased the city services bill to pay for more police and fire staffers.

Have we approached levy fatigue yet? Curtis Wright, who has led numerous successful campaigns in the county, says no.

“The voters in Benton County, in the Corvallis School District, and in the city of Corvallis have more often than not shown they care a lot about maintaining our quality of life, about providing needed services for the benefit of all, and especially those in our communities who are otherwise underserved,” Wright said. “I trust they will continue to vote with their hearts.”

Benton County officials are hoping that generosity continues into May of 2022, when a new justice system improvement plan likely will be on the ballot, with the key item being a new jail. Measures to replace the jail have not fared as well as the county’s local option levy, which has been a winner since 1998, except for a hiccup in 2006 that was quickly rectified in 2007.

Jail bonds, however, have been turned down repeatedly, most recently in 2015, when a $25 million plan that would have placed the new jail in Philomath was defeated.

The new proposal, which still is being refined, likely would cost in the $90 million to $100 million range, said Nick Kurth, the project coordinator for the county's justice system plan.

The mix of possible facilities in the 2022 bond includes a new 120-bed jail (the current version has 40), a crisis response center, a restored courthouse, offices for the district attorney and a new law enforcement building to house the Benton County Sheriff’s Office, the Corvallis Police Department, and the 911 emergency dispatch center.

Kurth is looking at three sites, one in west Corvallis, one in South Corvallis and one downtown. The project team has added the westside site and eliminated a north site near HP Inc. since the plan was introduced to the Corvallis City Council in February.

“It’s not just about facilities,” said Kurth. “It’s about programs. We’re looking at the entire justice system, which is a big undertaking.”

“We’re due for a system upgrade,” Augerot said. “There is the human element of addressing causes that get people into the criminal justice system to begin with. Mental health and behavioral health … we heard that loud and clear. We’re not trying to solve yesterday’s problems. This is for the next 50 years.”

“There are numerous cases in which the Sheriff’s Office concludes on almost a daily basis that this is a mental health issue, not a criminal one," he said

There currently is a link between Measure 2-130 and the upcoming justice system bond. The crisis response center, or CRC, paid for by the levy would exist on an interim basis for the first 12 to 18 months, said Kurth, with bond funds likely providing the bricks and mortar.

“In the event the bond includes funds for a CRC and the bond fails, but the levy is renewed,” Kurth said, “the levy’s CRC funds may continue to fund the interim CRC, or might enable an expansion of CRC operations. In the event the levy isn’t renewed, but the justice bond passes, the county would have to consider myriad financial choices to account for the lost levy funding.

“Whether the county could continue to fund a CRC (and many other services, for that matter) in the event the levy is not renewed is unknown.”

Kurth said the summer months will be used to refine the justice system plan, test it with the public and refine it again.

Who are the “targets” of the direct mail literature?

“Special elections typically have lower turnout than general elections,” Wright said. “So it’s important to connect with people who vote, those with a record of voting consistently over the past three or four cycles of special elections. It’s a measure of an audience that cares a lot about our quality of life here.”

There is no organized campaign against Measure 2-130, and no one filed arguments opposing it in the county voter’s pamphlet.

Letters to the editor to the Corvallis Gazette-Times have come in strongly in favor of Measure 2-130.

Here is a service-by-service look at how the funds from Measure 2-130 would be spent, if voters approve the five-year bond measure renewal May 18.

Here is a look at the services that will be paid for if Benton County voters approve Measure 2-130 on May 18.

• Counseling and outreach for juvenile offenders

• Transition program to reintegrate those in custody back to the community

Benton County is planning to take a criminal justice facilities bond measure to the voters in May of 2022.

The city of Corvallis is taking a third run at persuading voters to pay for city services via a property tax levy.

Levies and bonds: The rising cost of services

Voters in the Corvallis School District are passing judgment on a $200 million facilities bond, with results due Tuesday night.

Gov. Kate Brown is the final stop for the Oregon Legislature's major gun legislation of 2021.

Benton County residents will be voting this month on whether to continue to pay for renting jail beds in another county to bolster the capacity of the current 40-bed structure next to the Benton County Courthouse (at lower left in photo) in downtown Corvallis. Measure 2-130 would also pay for a wide range of other public safety, health and corrections services.

Measure 2-130, the renewal of Benton County's public safety and health levy, is on the ballot May 18. Levy backers are spending approximately $9,000 on the campaign.