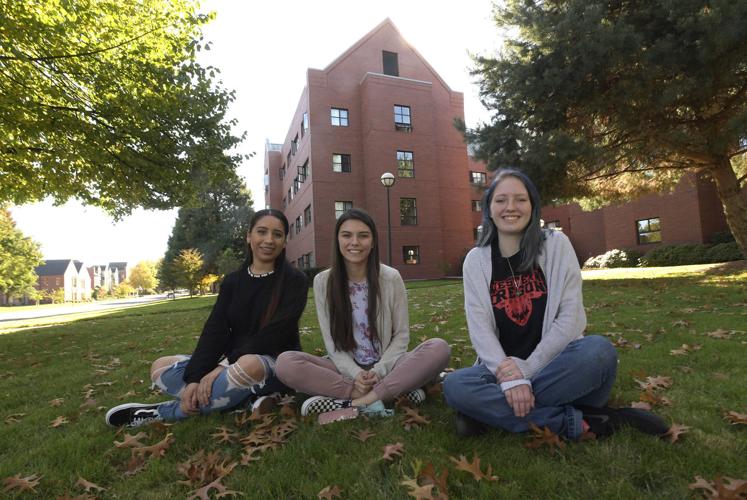 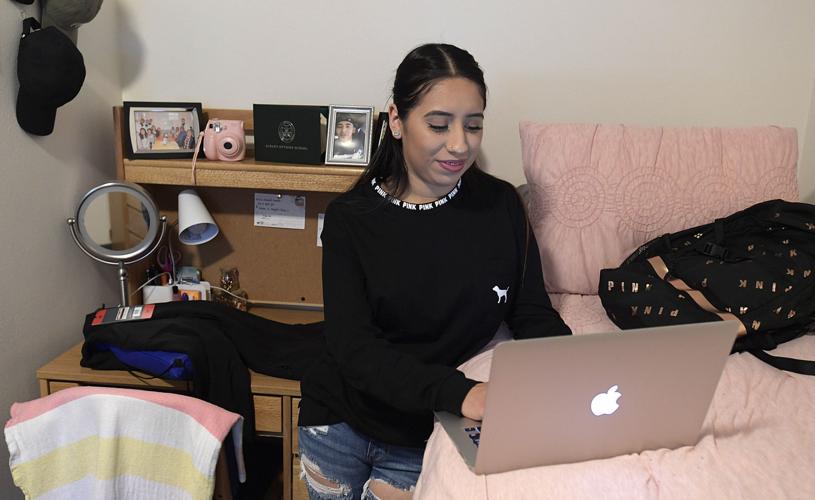 Among the donations Adriana Hernandez received was a laptop, which she uses daily while doing homework. 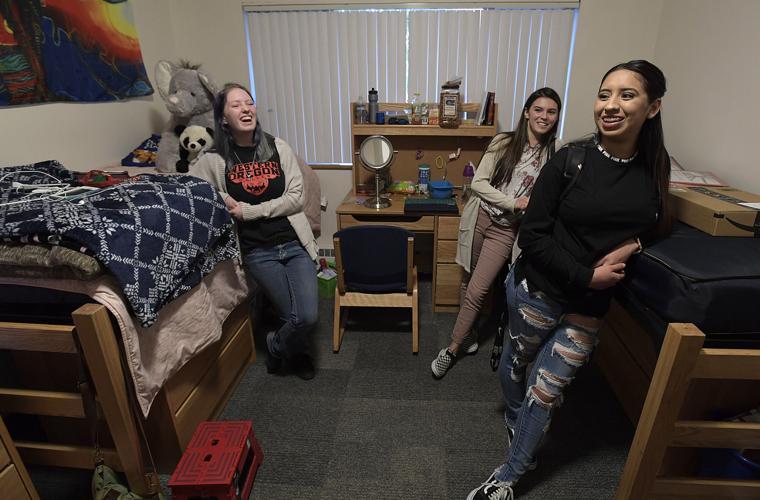 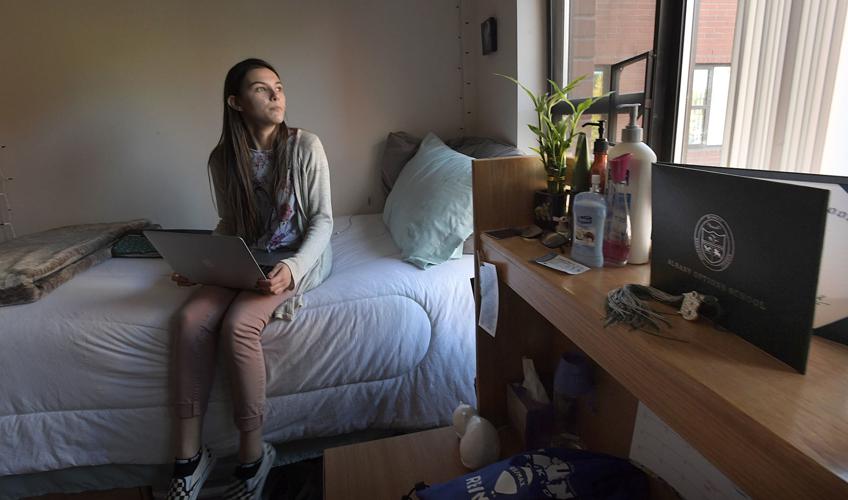 Makenzie Vineyard proudly displays her Albany Options diploma on her desk in her dorm room at Western Oregon University. 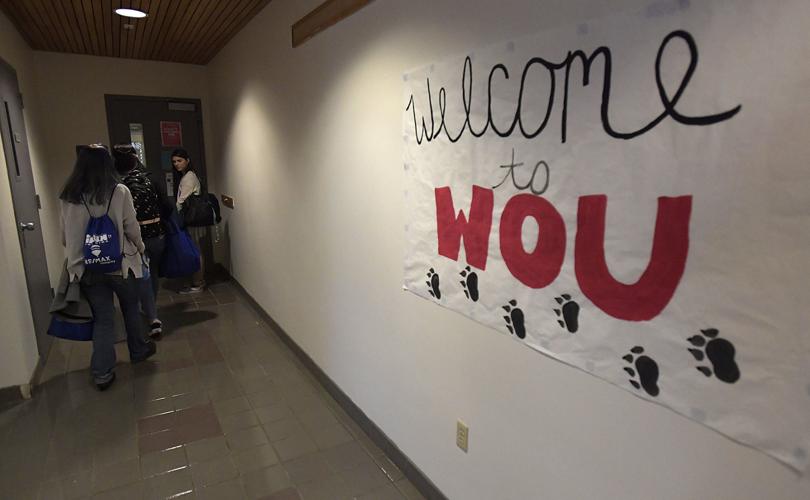 The Albany Public Schools Foundation has created a fund to help students like Adriana Hernandez, Makenzie Vineyard and Hailey Cotton, now are attending Western Oregon University, with school costs not related to tuition. 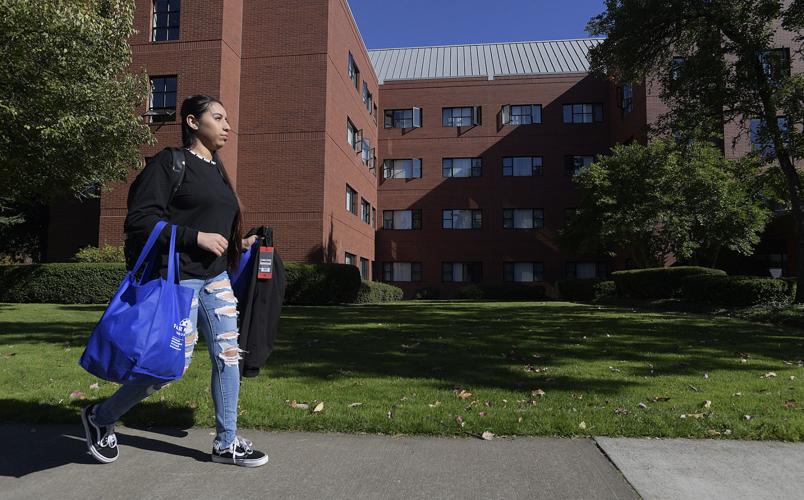 Adriana Hernandez carries donated items back to her dorm room on the Western Oregon University campus. 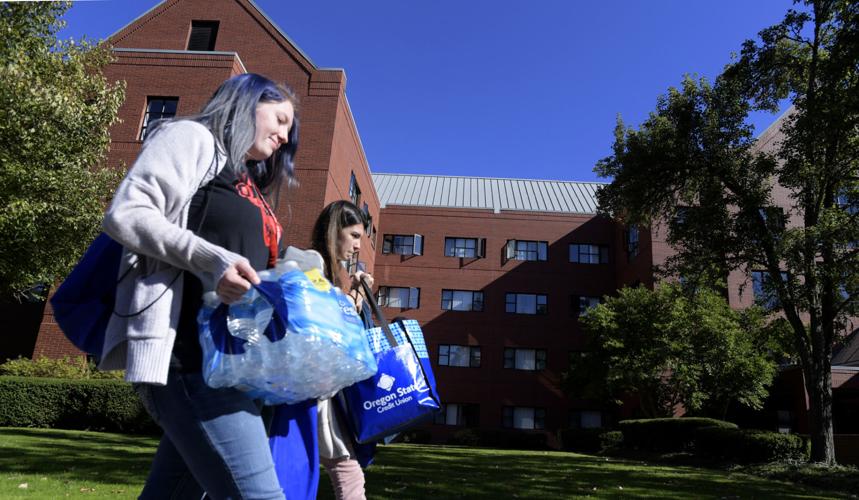 Hailey Cotton, left, and Makenzie Vineyard carry donations they received back to their dorm rooms on the Western Oregon University Campus. 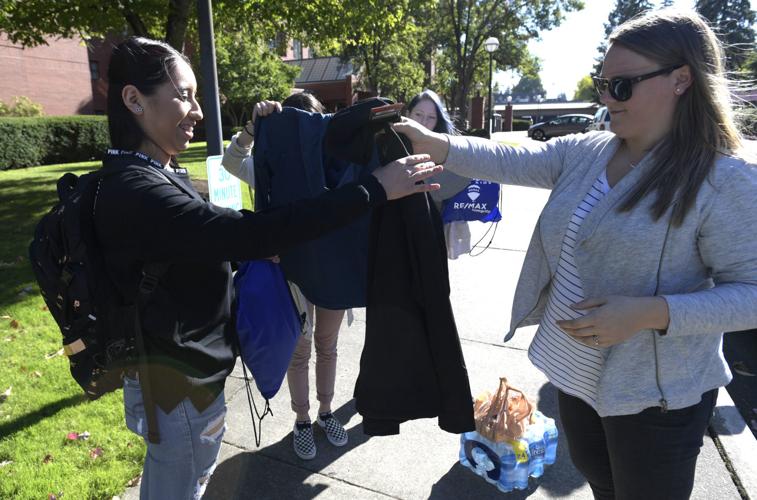 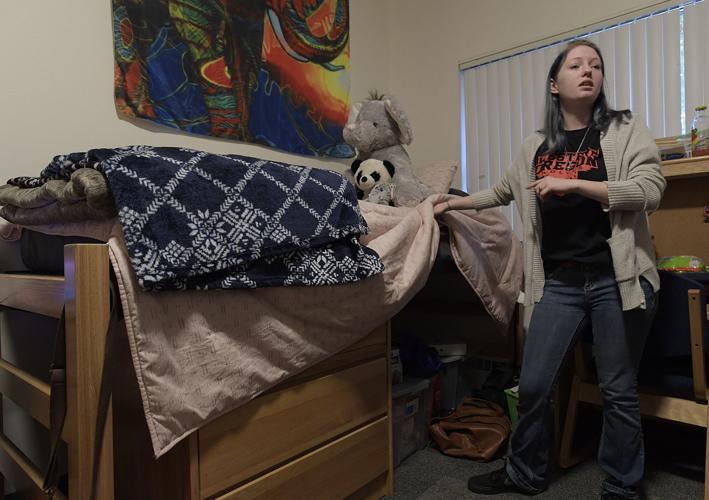 Hailey Cotton's unstable living situation led the teen to couch-surf through much of her high school years.

So when it came time to furnish a dorm room at Western Oregon University, the 18-year-old didn't even have her own pillow, let alone towels, a laptop, desk lamp, trash can or any of the other items the university suggested.

But she and fellow WOU classmates Makenzie Vineyard and Adriana Hernandez — all 2018 graduates of Albany Options School — knew they had an ally in AOS counselor Anna Harryman, who had helped them enroll.

Thanks to Harryman's efforts to build partnerships with the Greater Albany Rotary Club and the Albany Public Schools Foundation, the three have all their dorm necessities covered. And students who come after them will now have access to the same kind of help.

The foundation has started a Student Assistance Fund to help students in the alternative high school program cover college costs that fall outside of tuition. Right now, the fund has $500 in it strictly for Albany Options School students, but the plan is to expand to help Albany's other high schools, too.

"This has really turned into something so exciting," Harryman said. "Our community has a low college-bound rate, as does Oregon in general, and this is such a practical way for us to help students who didn't think college was an option be successful."

Albany Options School grew out of earlier credit recovery programs, receiving its own name in 2003 and its own building in 2008.

This past spring, the program graduated a record 61 students. Cotton, Vineyard and Hernandez are the first graduates in the alternative school's history to go directly from the school to a four-year university.

The three are among five students this year accepted directly into four-year universities. The other two decided to spend two years at Linn-Benton Community College before transferring to the school of their choice, an art college in Portland, so they didn't have dorm rooms to furnish.

Cotton, Vineyard and Hernandez, however, all preparing to settle in at WOU, were taken aback by the list of suggested decor.

"I was overwhelmed as soon as I looked at it," recalled Vineyard, who first alerted Harryman to the situation. "I didn't realize there was going to be so much. I just needed to know where to start, and that's why I called Harryman."

The AOS counselor was a natural choice because she had been the one to push the three to enroll at a four-year university, to seek financial aid, to not give up, the three said.

Cotton had given Harryman a flat "no" when the counselor first suggested a four-year school. She had plans to attend LBCC and go into nursing. But Harryman didn't back down. She pointed to Cotton's grade point average, more than 3.0, and insisted she could make it at WOU.

"I said, you have the GPA, you're doing it,'" Harryman acknowledged.

Hernandez decided if her classmates could go, she could, too. "Can you help me, too?" she remembers asking her counselor.

Harryman said she pushed for WOU specifically because it has strong programs while maintaining a small-town, small-class atmosphere with plenty of access to help. And it takes students on the strength of their grade point average, not requiring the SAT scores that students who didn't see themselves on a college track may not have bothered to earn.

So there the three were, with acceptance notifications and most of the financial aid and scholarships they would need for the first year's tuition, but without anything extra to make their dorms into temporary homes.

Vineyard turned to Harryman. Harryman reached out to Sarah Steen, who is chairwoman of the Greater Albany Rotary Club's New Generations youth committee. The committee covers leadership camps, exchange programs and scholarships for "overcomers:" students who have excelled despite sometimes overwhelming odds.

Steen went to the Rotary Club board, and board members immediately agreed to donate $200 per student.

"It’s so rewarding for our club to be able to help contribute to these young students who need a little help and guidance and someone to believe in them," Steen said.

As president of the Community Before and After School Child Care Program, Steen also spoke about the situation with a fellow board member, Brent Wiest, who's a general manger at Target Distribution. Target kicked in another $200.

Harryman knew of a donor who wanted to give up to $1,000 per student for a laptop, but needed a nonprofit as the conduit for the donation. Harryman reached out to the Albany Public Schools Foundation, which set up the Student Assistance Fund.

Executive Director Aimee Addision said the foundation has made $4,700 in items and cash possible for the three so far. That's allowed new MacBook Airs for each, a bicycle for one of the girls so she could get to work, and clothing, dorm supplies and cash for incidentals for all three.

Part of the total even includes a donation from an individual of $200 per term for each of the three, provided they keep at least a 2.0 GPA.

"We are incredibly proud of these girls for overcoming challenging circumstances and being the first students in Albany Options School history to get accepted into a four-year university," Addison said. "We are hoping to grow this fund to help the WOU students as well as impact additional students like these three girls."

Cotton, Vineyard and Hernandez said the help has made a world of difference. The donations gave Cotton the bedding she needed, for instance, but also paid for storage bins to go under her bed, a mirror for the wall, a coffee maker, laundry detergent, and an umbrella for mad dashes across campus in the Oregon rain.

Hernandez, for instance, who has lived in the United States without a parent since the age of 12, had a job and a place to stay during high school but used all her paychecks to cover bills.

The donations, she said, "technically bought all the things I have in my dorm room," including a pair of flip flops to wear to the shower.

Vineyard said even small items make a big difference. "Definitely the shower caddy," she said. "I didn't think about how I was going to get all my stuff to and from the bathroom at first."

All three students moved in Sept. 16 and classes started the 24th. Cotton plans to major in criminal justice, Vineyard in psychology and Hernandez in premed for nursing, and all three say classes are going well so far.

It's hard to be the first in their family, and their own high schools, to be accepted to a four-year university, the three said.

"Nerve-racking," Cotton pronounced. "'Cause then if you fail, you're just like everyone else in your family."

Added Vineyard: "I feel like there's a lot of pressure, because we're the first to do it."

But all agreed that even though community colleges are more affordable, there are advantages to going to a school that provides room and board. Going to a community college would require reliable transportation and extra time to get to and from classes. The three would have potentially less immediate access to tutoring or other support systems, and might have living conditions less conducive to focusing just on school.

Hernandez said she's already finding lack of sleep to be a problem, with late nights spent studying combined with classes that start at 8. But living on campus means she can hit her dorm for a nap.

She and her classmates said they're extremely grateful for the help they've received in making their first year a reality.

Added Cotton: "It takes a load off. You don't have to stress as much. It's really nice."

The Albany Public Schools Foundation has established a new fund to help with college costs outside of tuition.

Residents make make donations specifically designated to the fund, which is to help low-income students who are attending either college or a trade school afford room and board, dorm room supplies and books.

The students in need will be identified and recommended for assistance by local high schools each spring.

Aimee Addison, executive director of the Albany Public Schools Foundation, said the rules haven't been worked out completely yet but she envisions students from different schools submitting applications for the funds, and donors being able to designate specific schools to help.

Specific information on making a donation can be found at the group's website, http://albanypsf.org.

Club officials noticed a lack of students from Waverly at the main location, which is only about a mile away. Here's why and how they addressed that.

Netherlands may supply Leopard 2 tanks to Ukraine to fight Russia

Among the donations Adriana Hernandez received was a laptop, which she uses daily while doing homework.

Makenzie Vineyard proudly displays her Albany Options diploma on her desk in her dorm room at Western Oregon University.

The Albany Public Schools Foundation has created a fund to help students like Adriana Hernandez, Makenzie Vineyard and Hailey Cotton, now are attending Western Oregon University, with school costs not related to tuition.

Adriana Hernandez carries donated items back to her dorm room on the Western Oregon University campus.

Hailey Cotton, left, and Makenzie Vineyard carry donations they received back to their dorm rooms on the Western Oregon University Campus.