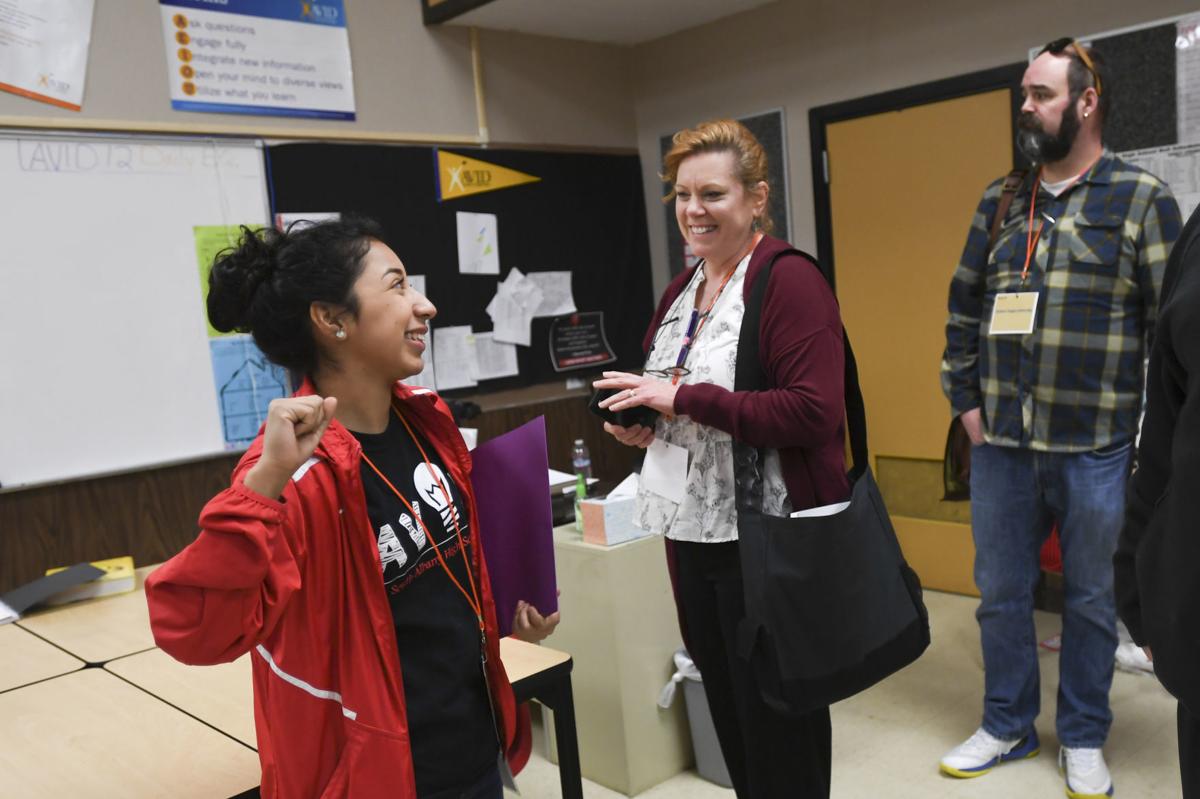 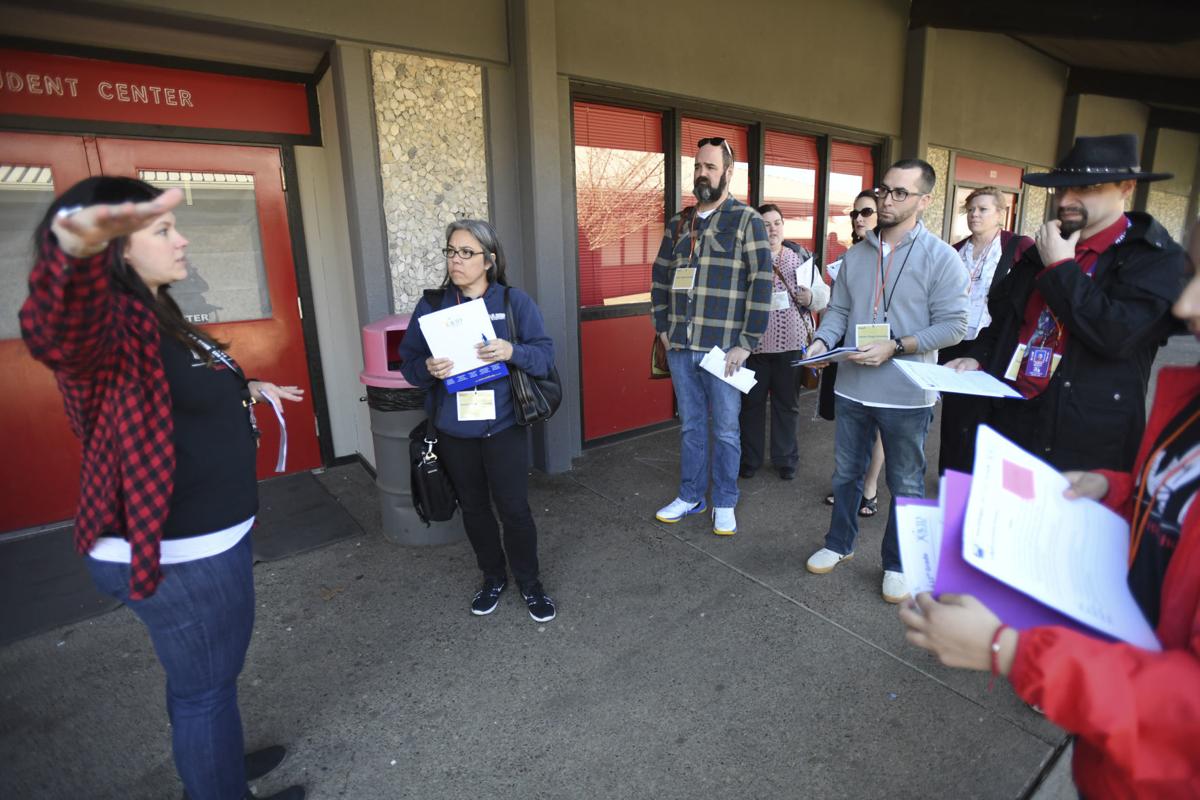 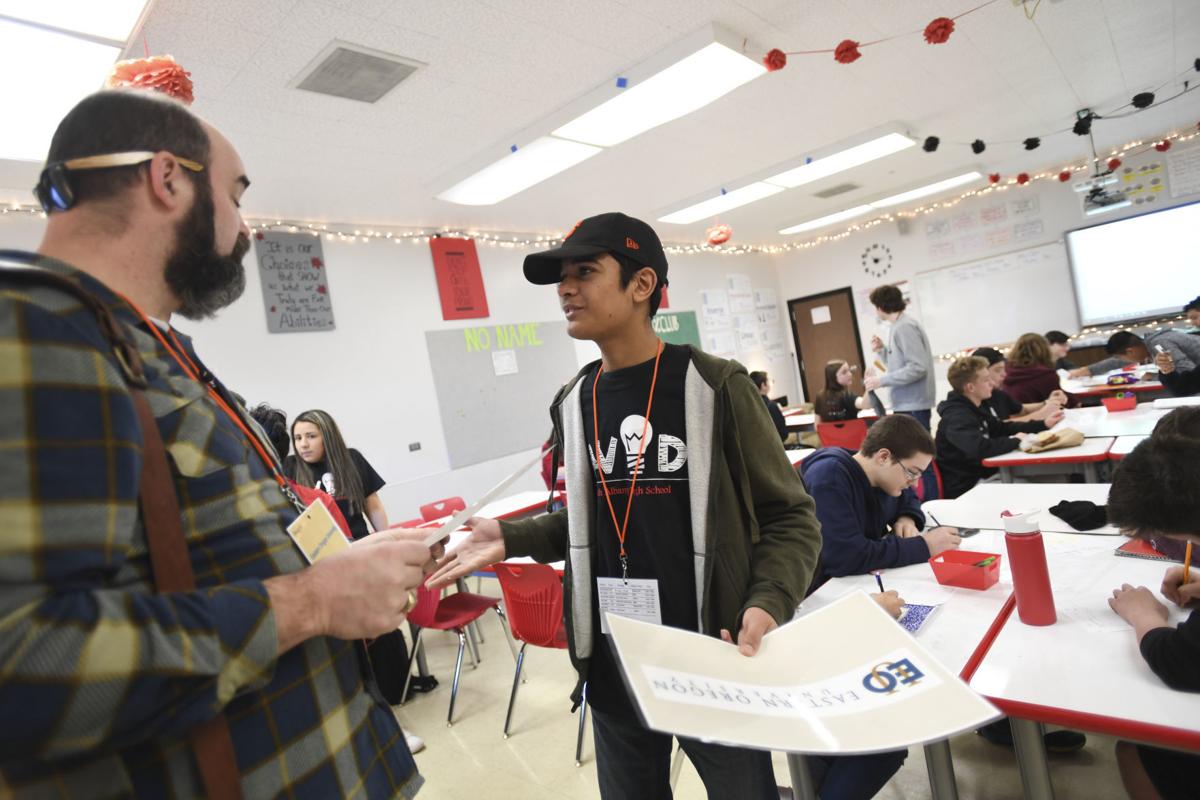 Close to 100 educators from around the state visited South Albany High School on Tuesday to observe the school's successful use of a college and career prep program called AVID.

South Albany is the first secondary school in Linn or Benton counties to be named an AVID Showcase School (in Lebanon, Pioneer School was named a Showcase School for elementary programs last fall).

State AVID Director Melissa Cole, who joined the tour Tuesday, called South "an exemplary model of AVID expectations at a high school" — so much so that the program has asked South to hold another Showcase tour this fall and again next spring.

The school also is being encouraged to apply to be a national demonstration school, although the evaluation process likely will take much of next year and results won't be known for a while.

Just being able to apply, however, means everything to Angela Spencer, who teaches AVID classes for freshmen and sophomores and is co-coordinator of the AVID program at South.

"It's incredibly validating for all the hard work we've put in here," she said.

AVID stands for Advancement Via Individual Determination. Created by a private, nonprofit program in San Diego more than 30 years ago, it's meant to provide students with the academic and social support to get to college: especially those who might be the first in their families to make it that far.

At South Albany, AVID is found in individual electives but also in schoolwide strategies. At both levels, students practice organization, note-taking, critical thinking, working in groups and breaking down problems into step by step solutions.

On Tuesday, teachers from Madras, Grants Pass, Canby and Siletz were among educators who traveled to Albany to tour the school, observe classes and ask questions. Even some local educators, such as representatives from West Albany High School, which joined AVID in fall 2015, were on hand to learn more.

Thirty of South's 252 AVID students took on roles as Showcase ambassadors, leading tours, answering questions and participating on a student panel to talk about their experiences.

For Benjamin Sell, district coordinator for AVID for Greater Albany Public Schools, that was the best part. Listening to student stories is always the highlight of training sessions, he said, and always leave him marveling at how poised, articulate and thoughtful they are. This time, he said, it was so amazing "to have our kids be those kids."

At South, however, AVID achievements go beyond personal anecdotes.

Since bringing the program in four years ago, South Albany has seen a 65 percent decrease in students who need credit-recovery work. Only 24 seniors aren't on track to graduate, a 79 percent drop from 117 four years ago. The number of students receiving more than one behavior referral has dropped by nearly half.

AVID kids have higher attendance: 94 percent, on average, compared with an overall rate of 91 percent for the school total. And they get better grades: This year's grade point average is 3.07 for AVID students and 2.70 for South as a whole.

"The kids are so proud of what they've accomplished," Belveal said. "They feel so good as students. They have that spirit of hope in their eyes."

Visitors were impressed, too. In written comments, they praised the school for offering multiple helpful practical strategies and showcasing a variety of teaching and learning techniques. They praised South for the amount of engagement students were showing in class, and the level of student confidence in leading the tours and panels.

"They were so impressed at how teachers are facilitators, but students are the ones who are leading the instruction," said Amanda GaVette, who co-coordinates the program and teaches the upperclassmen AVID classes.

South is now concentrating on recruiting for next year's AVID classes. Sell said it's possible the high school will have enough interest to start the year with three sections of freshman AVID, rather than having to add a class at the semester, as it did this year.

Nakyah Rethlefsen was one of the freshmen to take advantage of that addition. She's only been in AVID a couple of months but said she can already tell it will help her along her chosen career path, to study pediatric medicine.

"I think it's a good experience for students and myself. It helps me be organized," she said, adding: "It's kind of a big family, almost. There's a bond between everybody."

Israel: Who is Naftali Bennett?