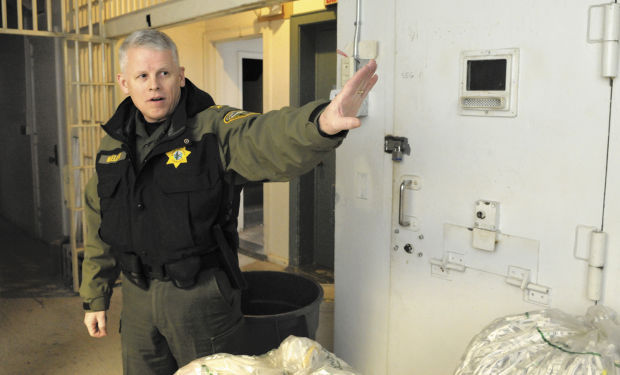 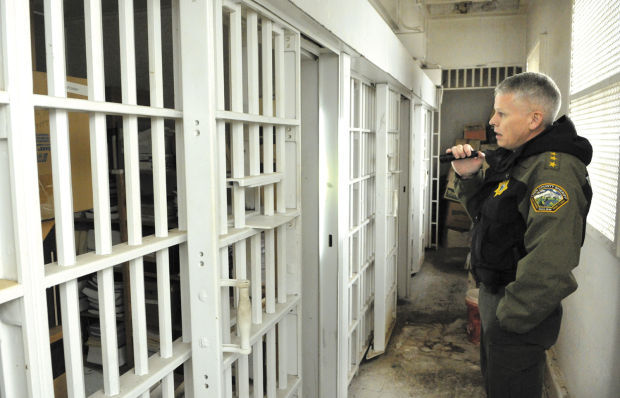 Linn County Sheriff Tim Mueller shows the cells at the old jail on the top floor of the Linn County Courthouse. (David Patton/Democrat-Herald)

It’s easy to imagine the sounds of life in the old Linn County Jail on the top floor of the courthouse as Tim Mueller tells tales about his first five years with the Linn County Sheriff’s Office.

Mueller has been Linn County sheriff since 2005, but he still can remember the names and charges against many of those inmates from nearly 30 years ago.

He also remembers the tussles that often occurred between staff and prisoners in the overcrowded, bare-bones jail that was closed in 1989 after years of legal wrangling.

Recently, the 52-year-old Mueller took one last visit to the old jail — accessible by an elevator constructed in 1939 — before he retires at the end of the month.

“I didn’t really want to work in the jail,” Mueller admitted.

In fact, his mother wanted him to be a vocational ag teacher.

The Tangent native and 1979 West Albany graduate had spent three years as a military police officer in the Army, including a tour of duty in Germany, and then spent some time breaking wild horses on a ranch in Texas before returning to Linn County.

“Oregon’s economy wasn’t doing very well and I was building pole barns with my dad,” Mueller said. “I was thinking about going back to Texas when Art Martinak called me up and said I should come down and talk to him. I had already put in an application. I was hired that same day on May 8, 1984.”

Martinak was serving as undersheriff for Sheriff Ken Goin at the time.

Before the new $7.3 million jail opened at 1115 Jackson St. S.E. in May 1989, the sheriff’s office was housed on the first floor of the courthouse in what is now the district attorney’s office area. Prisoners were shuttled from the first floor to the fourth floor jail by elevator.

“We booked inmates on the first floor and there were quite a few donnybrooks,” Mueller said, and laughed. “And, in those days, the inmates were allowed to smoke in the jail, so the walls and ceilings were yellow from the nicotine.”

Memories flood back as Mueller walks into a storage room and recognizes his handwriting on each drawer’s label.

“Wow,” he said, holding up an old cigarette rolling machine used by inmates.

At its peak, Mueller said, as many as 104 inmates were in a lockup designed to hold far fewer bodies.

“It was nuts. They were sleeping on mattresses on the floor,” Mueller said. “There were fights every day.”

Before the new jail was completed, the old jail was limited to a maximum capacity of 24 inmates.

There were 13 deputies assigned to the jail, Mueller said.

Mueller said in those days, the jail held only four to five women.

Most of his fellow jail workers have retired, although Barry Baggett, now the jail commander, is still on the job.

Mueller said although there were many scuffles, the only time he felt vulnerable was after two inmates killed another inmate and then hanged him, trying to make it look like suicide.

Mueller helped to  cut the inmate down. He said it was a gruesome sight.

“One of the guys was very scary. He used to get letters from Charles Manson,” Mueller said. “He killed the other guy because he heard we were going to ship him back to Texas, where he had stolen a car, and he didn’t want to be on a work gang like they have down there.”

Mueller said in the old days, the jail often held weekend drunks who got mean only when they were liquored up.

“I’ve had guys want to wrestle and fight, but when they sobered up, they were nice guys,” Mueller said. “Some even came up and shook my hand afterwards.”

One time, Mueller recalled, an inmate who had spent the weekend in the Lebanon jail was being strip-searched and a 9-millimeter pistol fell out of his pants. That got everyone’s attention in a hurry.

But there also were pranks to break the stress, Mueller said, including the time a supervisor’s office furniture was moved onto the courthouse roof.

Mueller said a big difference between 1984 and today’s jail is the number of mentally ill inmates the jail now houses after the state began closing down mental health facilities.

A challenge every day

Mueller said he doesn’t second guess his decision to retire with a year left in his term.

He was promoted to jail commander and in 2001 to undersheriff by then Sheriff David Burright. He succeeded Burright as sheriff in 2005.

“I’ve had three key jobs with the department — jail commander, search and rescue adviser and sheriff — that I’ve really enjoyed,” Mueller said. “There have been some tough days, for sure, and it hasn’t been easy. Every day is a challenge, but I’ve never forgotten why I took this job in the first place and that was to serve the people and make a difference.”

Mueller said he especially enjoyed working with the search and rescue program.

He called the young people who make it through the week of grueling testing, “the best ... they give us hope for the future. Their training is extremely tough, and then they go out under harsh conditions and help find people. All for an MRE (meal ready to eat) and a bottle of Gatorade. They’re amazing.”

Among the challenges has been dealing with ever-tightening budgets.

Last year, Mueller had to trim more than $1.5 million from a $24 million budget. That included making 13 staff cuts, leaving 164 total employees. He also took 48 jail beds out of circulation two years ago due to state funding cutbacks, leaving 182 total beds.

Among his best memories was the arrest of John Arthur Ackroyd for the 1990 murder of Ackroyd’s stepdaughter, Rachanda Pickle. Ackroyd was already serving a life sentence for the 1987 murder of Kaye Jean Turner in the Metolius River area.

Deputies never let the case die and thanks to new technology were able to make a case against Ackroyd, who was always the key suspect in the slaying. The case is working its way through the court system.

Mueller was among hundreds of law enforcement officials and volunteers who scoured the Santiam Pass area for weeks following Pickle’s disappearance.

Last January, Mueller made national headlines when he wrote a letter to Vice President Joe Biden informing him the sheriff’s office would not enforce efforts by the Obama administration to take away individuals gun ownership rights. Since then, several other sheriffs across the country have taken similar stances.

“In the wake of the recent criminal events, politicians are attempting to exploit the deaths of innocent victims by advocating for laws that would prevent honest, law-abiding Americans from possessing certain firearms,” Mueller noted in the letter.

“We are Americans. We must not allow, nor shall we tolerate, the actions of criminals no matter how heinous the crimes to prompt politicians to enact laws that will infringe upon the liberties of responsible citizens who have broken no laws.”

He never received a reply from the vice president.

Mueller will be succeeded by Undersheriff Bruce Riley, who will be sworn in Jan. 7.

Mueller enjoys hunting and vacationing in Hawaii and also hopes to get reacquainted with an old hobby — blacksmithing.

He and his wife, Jean, live near Sodaville. They have three children, Lee, 20, who recently completed Army basic training; Allie, 14, and Abby, 10.

“I know I’m going to miss my friends and the people I have worked with,” Mueller said.

UP NEXT FOR TIM MUELLER

The 52-year-old is a Tangent native and 1979 graduate of West Albany High School.

Mueller and his wife, Jean, live near Sodaville. They have three children, Lee, 20, who recently completed Army basic training; Allie, 14, and Abby, 10.

UP NEXT FOR TIM MUELLER

The 52-year-old is a Tangent native and 1979 graduate of West Albany High School.

Mueller and his wife, Jean, live near Sodaville. They have three children, Lee, 20, who recently completed Army basic training; Allie, 14, and Abby, 10.

New US panel aims to separate science and politics

New US panel aims to separate science and politics

The right to bear arms

It seems inevitable that Bruce Riley would wind up in law enforcement.

Linn County Sheriff Tim Mueller shows the cells at the old jail on the top floor of the Linn County Courthouse. (David Patton/Democrat-Herald)