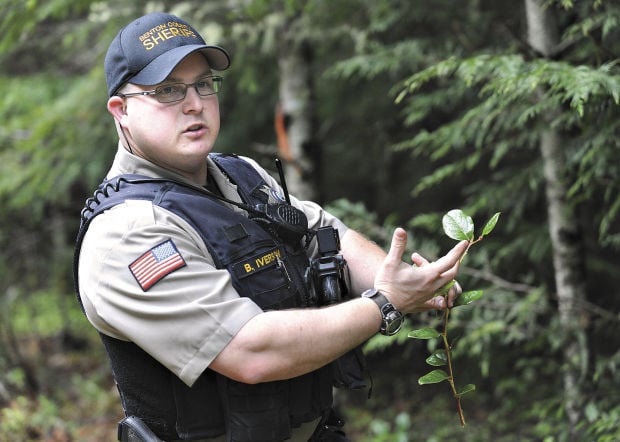 Benton County Sheriff's deputy Brent Iverson shows salal, which grows in the forest of Oregon. Earlier this year Iverson made one of the largest salal busts in Oregon's history. (Mark Ylen/Democrat-Herald) 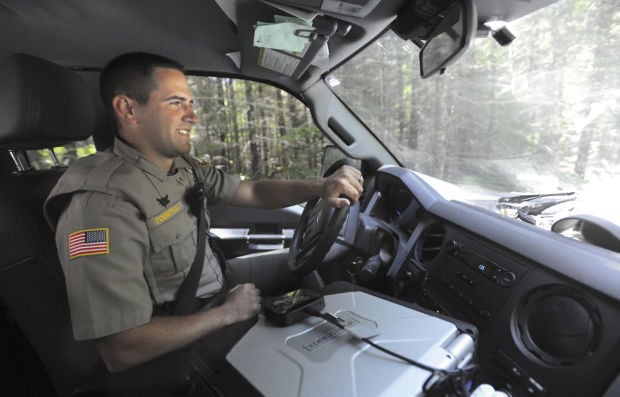 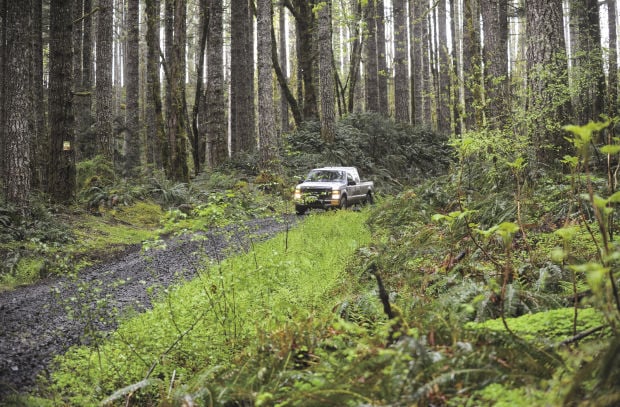 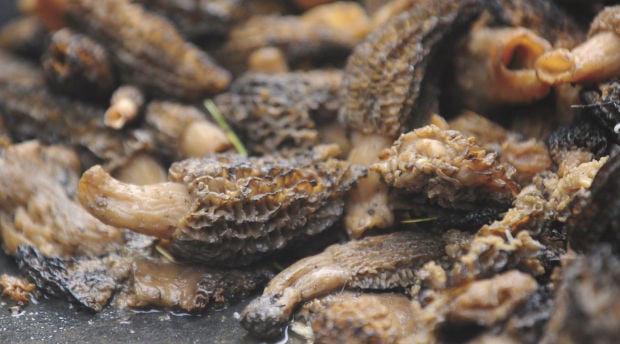 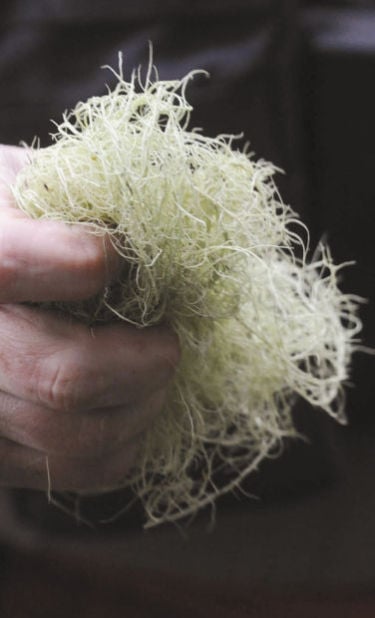 Moss is one of the products stolen from local forests. (Mark Ylen/Democrat-Herald)

Benton County Deputy Brent Iverson drove through a forest near Flat Mountain, pickup bouncing along, eyes searching the green, lush landscape along the logging road for tell-tale signs of crime.

He scanned for clues like the white of freshly cut tree branches or trash such as rubber bands, which are used to bundle vegetation.

The woods west of Philomath, like many areas in Linn and Benton counties, are idyllic.

And they’re also a gold mine for crooks who illegally harvest plants, moss and mushrooms — sometimes even whole fir trees — and damage the environment while doing so.

Forest products theft is a multibillion dollar industry every year in the United States, Iverson said.

“It’s amazing what people will steal from the woods. People can make a living doing this,” he added.

“If it grows out here, somebody’s probably taking it. And it’s overlooked how big of an issue this is,” he said as he drove on a gravel road on the east side of Green Peter Reservoir.

The deputies aren’t searching for families picking an item or two. They’re after criminals taking hundreds or, in some instances, thousands of pounds of products. The lawmen said crooks have even hired semi-trailers to haul their illegal harvest.

In February, for example, Iverson followed a pickup full of salal to a Philomath warehouse and ended up seizing more than 13,000 pounds of the plant. A dump truck couldn’t carry all of it away in a single load.

A Washington man was arrested on a charge of aggravated first-degree theft, and three others were arrested for illegal cut or transport of minor forest products.

According to a police report, the suspects had as much as $15,000 worth of salal, a leafy green plant used in floral arrangements, prized for its shelf life, and shipped from the Pacific Northwest to the East Coast and even Europe.

“That’s the biggest (salal case) in the state in the last 20 or 25 years that anybody’s heard of,” Iverson said.

The suspects had permits to harvest the plant, but they were over their weight limits by thousands of pounds, he added.

In other cases, criminals get permits to harvest in one area, but stray into another where taking forest products is prohibited, such as on private timber land.

Iverson stressed that not everyone harvesting forest products is a crook.

“There are also legit people out there that are doing this work and making a living,” Iverson said.

But plenty of people cut corners to ensure they make a buck.

The United States Forest Service estimated that only a third of specialized forest products removed from its land is taken legally, according to a Linn County Sheriff’s Office presentation.

Depending on the time of year, there are different products the forest offers.

During the fall and winter, for example, thieves cut boughs from evergreen trees to sell during Christmas season, Iverson said.

When snow melts from the higher elevations in the spring, bear grass is a popular item for flower arrangements.

Delicious fungi such as truffles and morel mushrooms are targets in the spring and the fall.

Others seek out products like Oregon grape or devil’s club, which are used as anti-inflammatories and for other medicinal purposes. (Oregon grape also is used by florists.)

And people will even steal plants such as ferns to landscape their yards.

Moss and firewood, which are harvested year round, are some of the most high-volume items stolen, according to law enforcement.

Fountain said he stopped a suspect a few weeks ago with 600 pounds of moss in the back of his pickup. And eventually, that illegally harvested product was scheduled to make its way to a national retailer that would sell it at $9 for less than a pound, he said.

“Think of the market value of that,” he added.

A person harvesting bear grass is paid about 35 cents per pound. And that product gets sold to florists for $5 a handful, according to the Linn County Sheriff’s Office.

Fountain pointed to an area along the side of a timber road where, on an earlier patrol, he found grass flattened like someone had driven on it.

“I stopped and decided to look around,” Fountain said.

Cascara is also called chittum, and its bark is used as a laxative.

The stripped trees will turn brown within a month as the organism declines. And all of the trees will die because of the harvest, Fountain said.

“Chances are they’re doing it all up and down here,” he added, clearly peeved.

Large camps, usually of migrant workers, also will set up in the woods, leaving behind litter, Iverson said.

Some of that is normal camping refuse, such as food and beverage containers.

But the trash includes items necessary for their industry, such as rubber bands and twine used for bundling product.

Iverson showed off a discarded glove he found in the woods with a Freddy Krueger-esque blade on a finger used for quickly cutting salal.

Sometimes the large camps will even hire poachers to provide food for the harvesters, Iverson said.

“They are a huge criminal network,” Iverson said.

The illegal harvesters aren’t exactly friendly, either, even if it’s just a lone mushroom picker.

Some will try to run others off their unofficial area with threats of violence, Iverson said.

“If people know there’s somebody out there picking, they stay away from it,” he said.

Linn County only has about 20 to 30 illegal forest products cases every year, but that could be partly due to staffing levels, said Sgt. Michelle Duncan, who manages the agency’s mountain patrol program.

The sheriff’s office has two full-time forest deputies who cover more than a million acres, including 3,400 miles of gravel roads.

“It’s a needle in a haystack,” Duncan said.

Iverson is Benton County’s lone forest deputy and covers about two-thirds of Benton County, or about 452 square miles of forestland.

Benton County’s forest deputy program requires a three-year commitment, he said — Iverson’s term is nearly up — and he’s learned the spots where people are going to be, depending on what’s in season.

Still, he stumbles across the remnants of camps in unexpected places.

But he also said forest deputies aren’t alone in the woods.

Iverson spends more time on the CB with timber company workers than he does on the radio with his official co-workers.

And he and Fountain said they also communicate regularly with federal agencies as well.

“You have multiple sets of eyes looking for people who don’t fit in the woods,” Iverson said.

Those who want to harvest forest products should generally call the U.S. Bureau of Land Management, U.S. Forest Service or Oregon Department of Forestry for information on permits. Some timber companies also will issue permits for people to go on their land.

It could happen to anyone

Zodelle Sales just wants to get her daughter Tiffany's things on the truck.

Benton County Sheriff's deputy Brent Iverson shows salal, which grows in the forest of Oregon. Earlier this year Iverson made one of the largest salal busts in Oregon's history. (Mark Ylen/Democrat-Herald)

Moss is one of the products stolen from local forests. (Mark Ylen/Democrat-Herald)