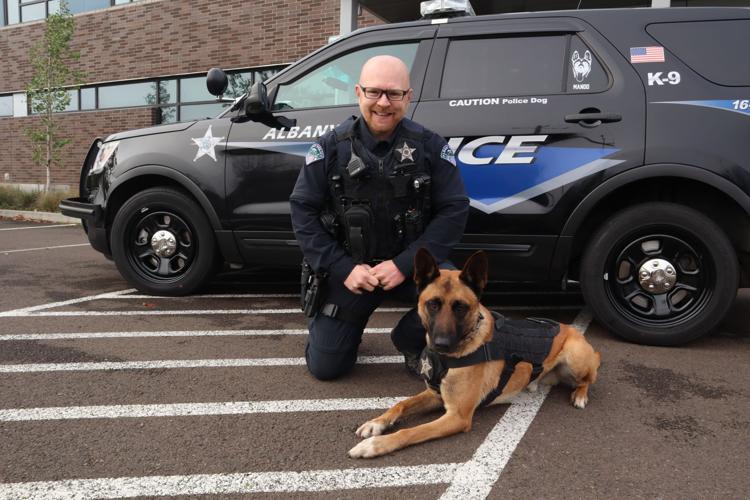 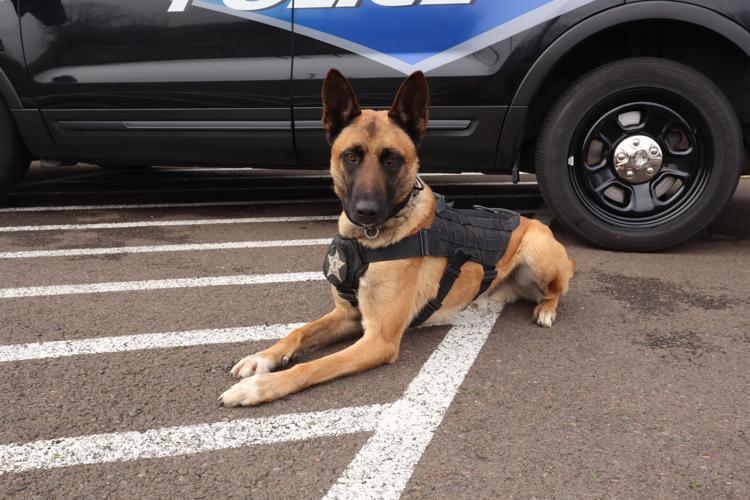 Mando, 2, came to the Albany Police Department as a puppy. 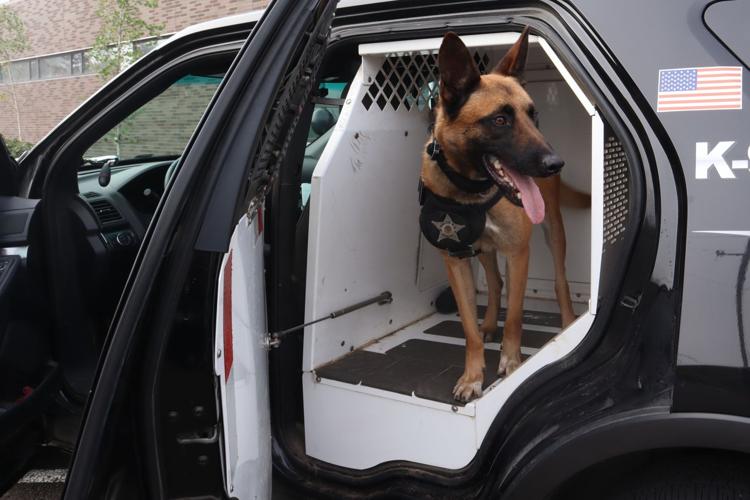 Mando looks around as he sits in his kennel in an Albany Police Department K-9 vehicle. 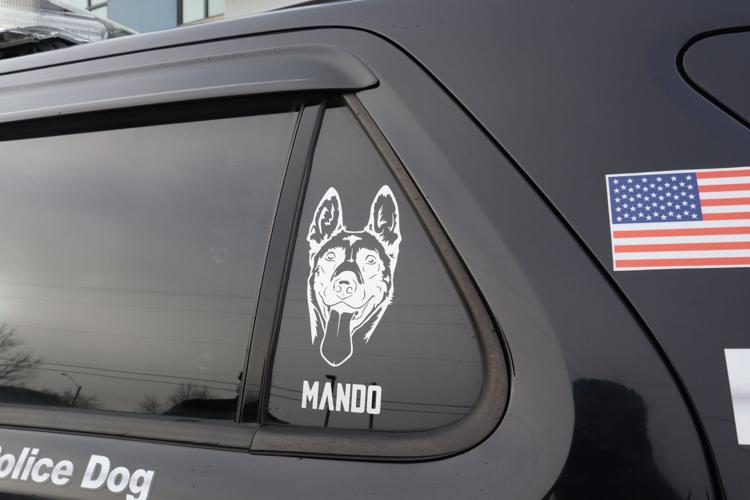 Officer Nate Ard made stickers for all of the Albany Police Department K-9 vehicles featuring each dog. Mando, Ard's partner, takes his name from the television show 'The Mandalorian.'

Albany police Officer Nate Ard has always been interested in having a K-9 partner. So when a new chief came in after his first few years in Albany, Ard asked if the agency could get a new dog.

“It’s something when I got hired I always wanted to do,” Ard said. “But we didn’t have funding.”

The chief said if Ard and any other interested officers could get the funding for the dog and the training, the department would work on asking the City Council for a car.

It took a couple of months to raise the funds. Throughout the whole process, Ard didn’t believe he had a chance of getting the K-9 partner. He said other interested officers had more experience.

But when the time finally came to apply for the program, only Ard and one other officer were tested and interviewed.

That’s when Yuri came along. The Belgian Malinois was Ard’s first APD K-9 partner. But the program didn’t have ample financial backing initially.

Ard recalled that his first K-9 APD car was a retired vehicle outfitted only with a radio and lights. The car kennel for Yuri was donated from another organization.

“Both of my first two dogs were completely funded by donations,” Ard said.

While the program comes from humble beginnings, it has grown over the years. APD currently has three dogs, all Belgian Malinois, on the K-9 unit. Here's the lineup:

In October, the Albany Police Department got some special financial backing for the K-9 unit: The agency won a $5,000 grant from Aftermath Cares, a company that assists agencies and others with crime scene and trauma cleanup. The APD K-9 unit was a grand prize tier winner, coming in second place overall.

The grants were awarded based on a voting system. Throughout "election" week, APD utilized their Facebook page to show photos and videos of their dogs to encourage community members to vote and support their local K-9 unit.

“I was actually pretty surprised,” Ard said of winning the grant. “We were hopeful, but I didn’t think we’d get it.”

He added that the department’s social media efforts definitely helped with getting the community involved and reminding them to vote.

“I think it shows the general support we have from the community,” he said.

Since Ard has been with APD, the community has always been a huge part of funding the K-9 unit.

The budget for the program isn’t huge. Ard said funds from the budget usually go toward acquiring a dog, its food, a little bit of training and some equipment. He estimates that at this point in the year, the budget is mostly spent. Ard makes the dogs their own leashes to help with costs — it’s also a general hobby of his.

Community donations are a big reason the agency has three K-9 officers, he said. These donations have been a key factor in acquiring dogs over the years as well as getting proper gear and equipment. Additional funding is also helpful when one of the dogs needs a trip to the vet.

Partners at home and at work

Being a part of the Albany police K-9 unit has made life and work more enjoyable for Ard. His retired partner Jager lives at home with him along with his current K-9 partner Mando.

According to Ard, Jager hasn’t quite adjusted to retirement. Jager loves to work and misses his partner during the day. He also isn’t too keen on a new dog joining the home.

While every agency has a different policy for when and why to retire a K-9 officer, APD leaves it up the partner.

“You don’t want to be a 65-year-old street cop!” Ard joked. He added that even when a dog may still be physically able to do the job, there’s a certain time when it just makes more sense to retire them. Jager worked until he was 10, and Yuri, Ard’s first partner, worked until he was 12.

Mando is an energetic partner — he’s only 2 years old, after all. Mando came to APD younger than the others before him.

“The other dogs were a little older and more mature,” Ard said. “They were like a lateral officer that comes from a different agency and you just kind of show them how things are done around here. Mando is like a kid you hire right out of college who you have to really train.”

A day in the life

No one day or shift looks quite the same for the partners.

Training is a big part of day-to-day life with Mando. If the duo doesn’t get called out to a case, Ard will try to do an exercise with Mando. This may include hiding an article in a field and having Mando track it down.

Tracking things down and locating people is the best part about having a K-9 partner for Ard. He said he’s always loved catching people and tracking down items that are seemingly lost.

“It’s finding the things and people that nobody else can find,” Ard said, “that’s why I got into it. It’s the enjoyment of being able to find someone who doesn’t want to be found.”

Ard remembered one occasion when Albany police was trying to find someone believed to be in a crawlspace. Officers searched the house and couldn’t find anything. But Jager did. Jager alerted the police to the bed. It turns out, the person they were looking for was hiding in the headboard the whole time.

It’s moments like those that remind Ard how important and useful a K-9 partner can be.

A dog attacked by a cougar last week in Lebanon died on Wednesday, Nov. 17.

The newest Albany police officer is movie-star handsome, possesses superb athletic skills and, according to his coworkers, is both tireless an…

An Albany man has been sentenced to five years in federal prison for distributing heroin and methamphetamine in and around Linn County.

Corvallis woman identified as individual killed in crash near Philomath

The Benton County Sheriff’s Office has identified the Corvallis woman who was killed in a pickup-versus-bicycle crash on Sunday, Nov. 28 near …

Gov. Kate Brown has called a special session of the Oregon Legislature to extend temporary protections against eviction for tenants awaiting r…

He's not your typical police dog.

Mando, 2, came to the Albany Police Department as a puppy.

Mando looks around as he sits in his kennel in an Albany Police Department K-9 vehicle.

Officer Nate Ard made stickers for all of the Albany Police Department K-9 vehicles featuring each dog. Mando, Ard's partner, takes his name from the television show 'The Mandalorian.'