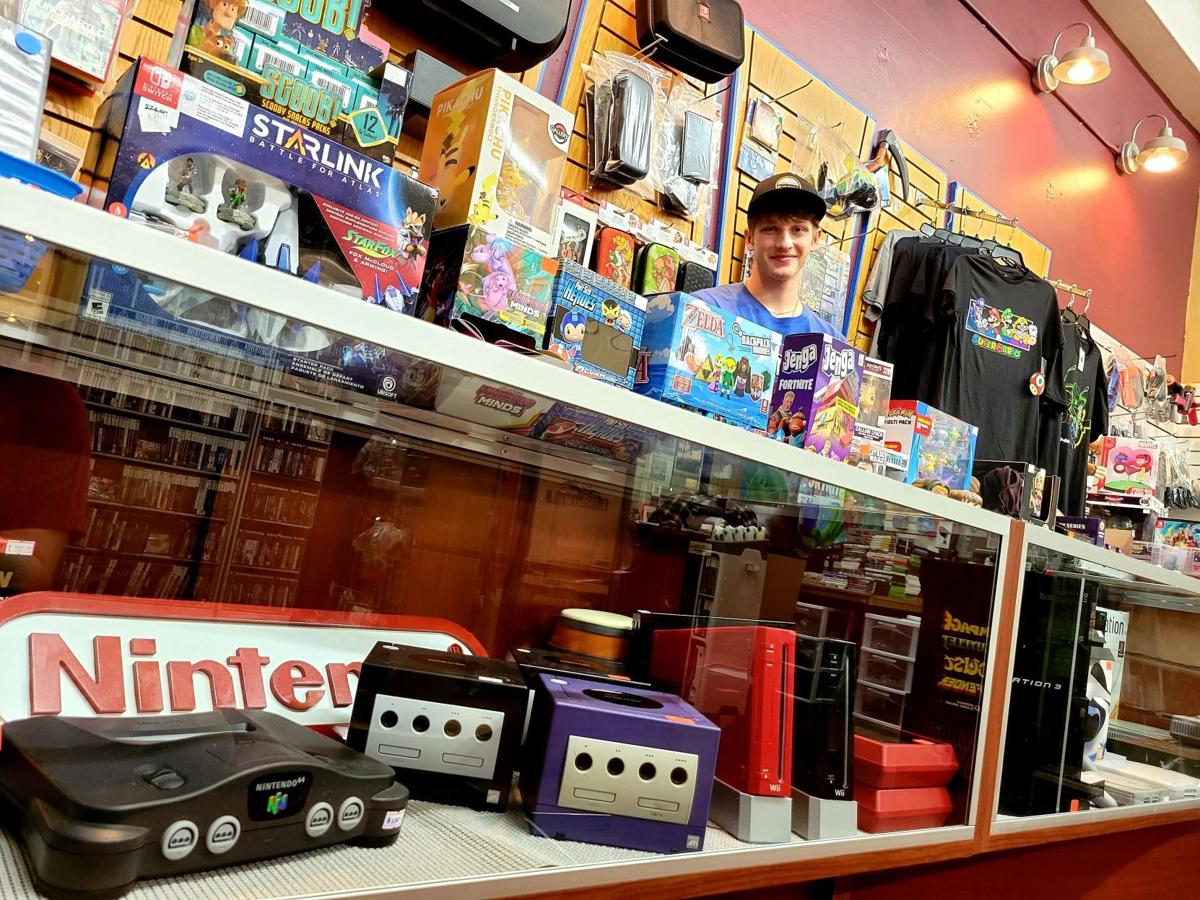 Daniel Kontra stands behind the display at his new store in downtown Corvallis, Kontraband Retro Games. He started the business during his senior year at Crescent Valley High School. 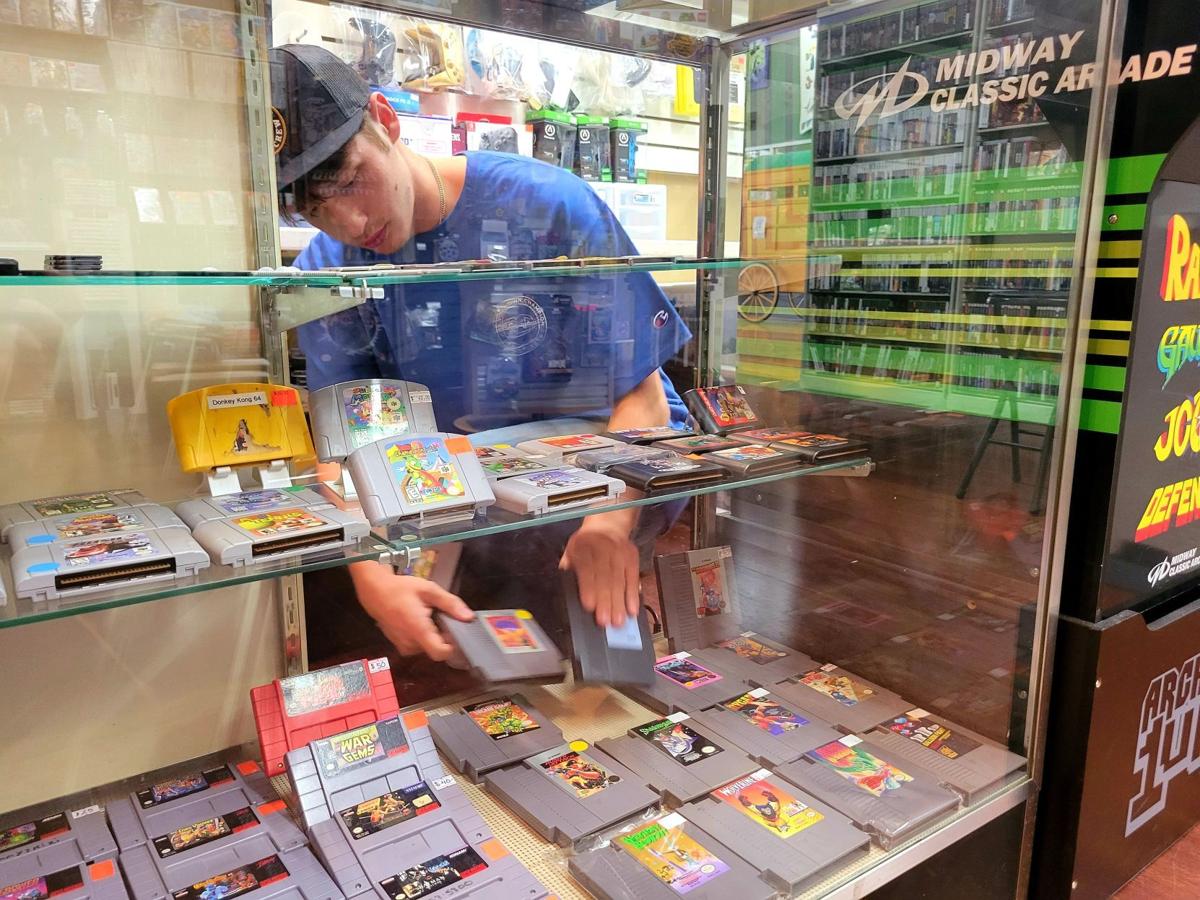 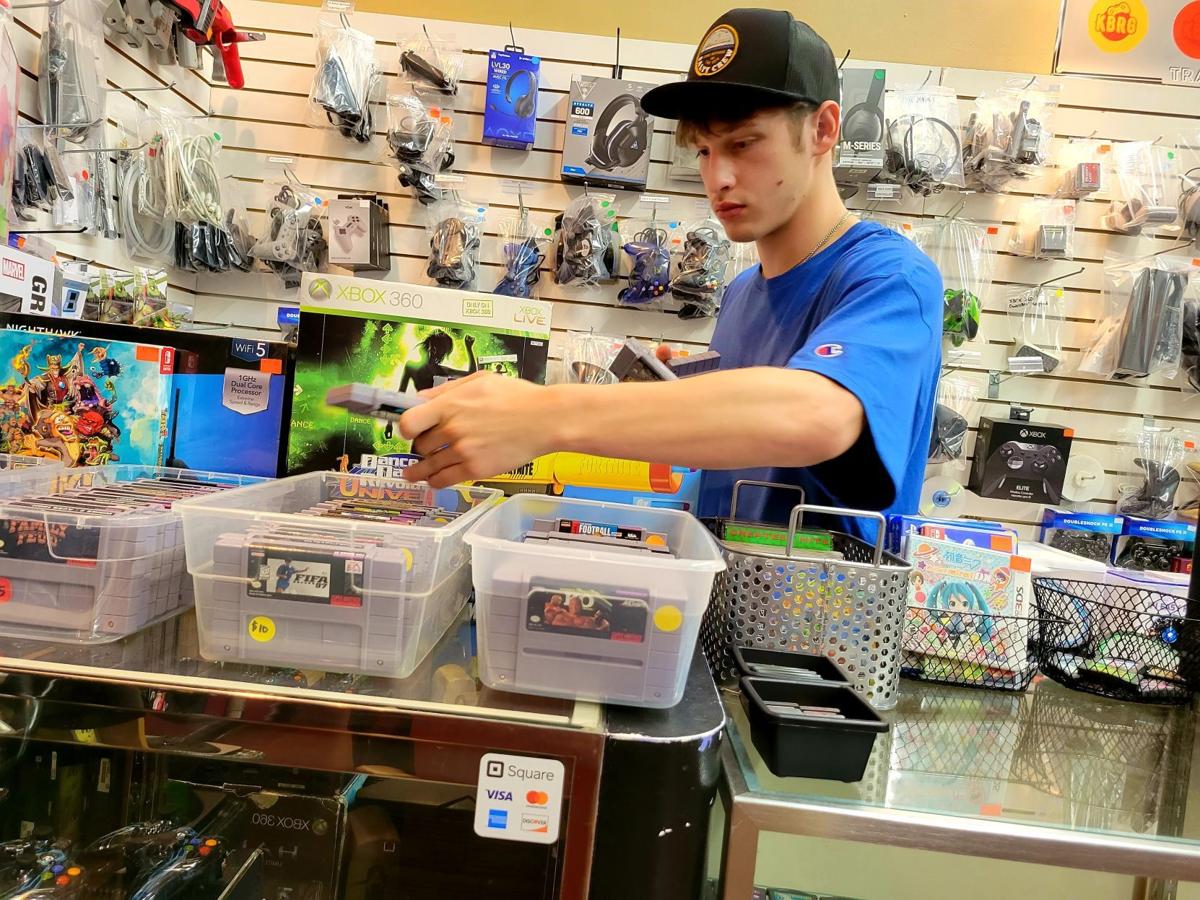 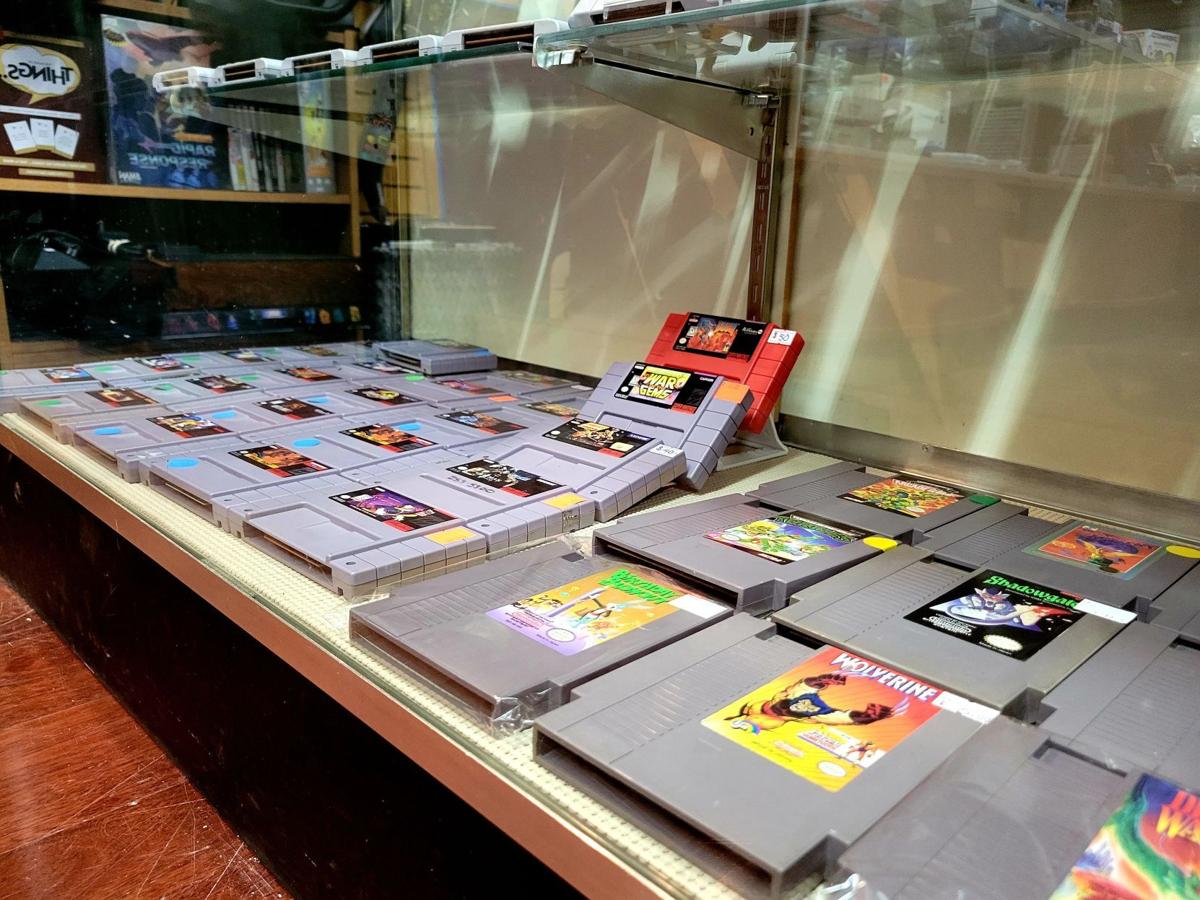 A display of vintage Nintendo and Super Nintendo game cartridges on display at Kontraband Retro Games in downtown Corvallis. 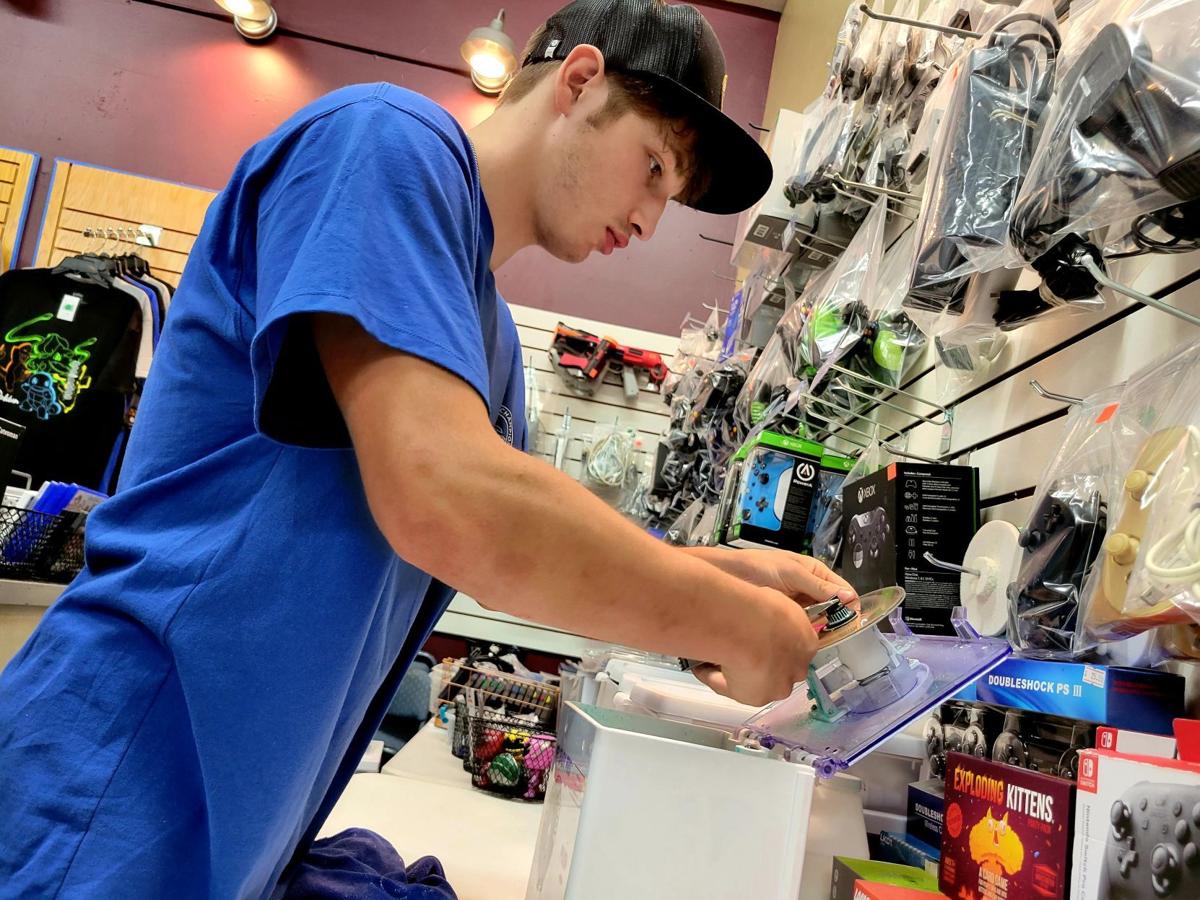 Daniel Kontra operates a videogame disc repair and cleaning machine at his new storefront in downtown Corvallis. The device can make previously unreadable discs able to function, a key investment for a retro game merchant.

In between virtual classes, wrestling season and, oh, by the way, going to the state championships this year, Crescent Valley High School senior Daniel Kontra did something even more incredible than just graduate high school: He started a business.

Kontraband Retro Games, which now occupies a space in Madison Plaza in downtown Corvallis, is the brainchild of Kontra after he decided he was just too stir crazy to spend his final year of school at home waiting for the pandemic to end.

His already-light school load in his senior year, coupled with the ability to study remotely, meant that Kontra could build his business in his ample free time. While some saw the pandemic as a hindrance, he saw it as an opportunity.

“I was bored out of my mind and thought that would be a really great thing to do,” he said. “It was a little difficult, but I’ve had help. I’ve had my mom and some friends. We’ve just been chipping away little by little.”

He was also helped by his landlord, Hugh White, who offered Kontra space in the downtown venue at a reasonable price without the need for a year-long lease or up-front security deposit. Kontra, 18, has had enough success to outgrow his first 300-square-foot storefront in the plaza and upgrade to a larger space in the same building.

To make money at that, one has to have a good sense of the value, or lack thereof, in certain old games. It’s not just about recognizing popular titles, it’s about recognizing the collectible nature of retro games.

Ones with their original packaging, for instance, can sell for much higher. Most kids (or even adults) throw out those cardboard boxes the second they unpackage their new toy. There’s so few of those old Nintendo and Atari boxes out there that they instantly become a collector’s item if they’re intact. Games that also come with the original manual are even more valuable.

“Sometimes a case or a box is more valuable than the games themselves,” Kontra explained, pointing to an old Nintendo 64 box that he estimated was worth about $150 even without the console it came with.

Kontra’s mother, Deborah Kontra, said that he’s always been a salesman with a keen eye for what will move for high prices.

She recounted stories of him selling candy out of a big bag at his brother’s football games for a dime or a quarter a piece. Or a family trip to Catalina Island where he collected beach shells and “laid them out on his arm like a used watch salesman,” she chuckled. She remembered him detailing the various prices — this one’s 10 cents or that one’s 25 cents.

“When he was 14 he borrowed $4,000 from me and went and bought a bunch of electronics on Black Friday sales and New Year’s,” she recalled. “By March he’d already paid me back and turned a nice profit for himself.”

That’s when they knew he had a knack for this kind of upselling, so a store was the next logical step for this young entrepreneur. Since starting his store in September 2020, just before the start of the school year, Kontra has grown his inventory so quickly that he not only outgrew his first storefront in Corvallis, he’s already looking into expanding to a second storefront in Eugene.

A recent investment for Kontra’s business was a disc cleaner and polisher, a JFJ EasyPro Kit, that can actually repair scratches on old games, turning them from unreadable to operational for just the cost of some polish and machine upkeep.

“The data is stored lower on the disc,” explained store manager David Hannahs-Jackson, who’s Kontra’s first and only employee. “The sander takes those valleys down a level and the polish goes over the top so it can be read.”

While they’re mostly using it to repair games in their own inventory so they can be resold, the service can also be part of the business going forward, as they charge customers to clean or repair their own old games.

Kontra says that his business filled a void in the local gamer scene.

“There wasn’t really anywhere to take retro games before, so people who had a bunch of old games they bring them in and can trade for store purchases,” he said. “That’s a big part of the community and it’s gone really good. The customers are awesome, one of my favorite things about working here.”

Deborah Kontra says she’s tremendously proud of her son’s accomplishments in the past year, from graduation to getting to go the state wrestling tournament — he didn’t place but said he was excited just to be able to go — and, of course, creating a business that he enjoys. All this while the world was shut down.

“COVID is such a negative thing and for someone to have turned it into a positive is such a great thing,” she said. “It’s a really amazing story.”

View this story on the website for more photos and a video.

Sometimes, people find success in areas that they aren’t planning to pursue professionally, and that's the case for Oregon State graduate Dere…

When Chad Lamer took over the Crescent Valley High wrestling program in the fall of 2014, the Raiders barely had a presence at the state tournament.

After weeks of steady decline, new COVID-19 cases and deaths related to the virus have increased, according to Oregon Health Authority data.

Daniel Kontra stands behind the display at his new store in downtown Corvallis, Kontraband Retro Games. He started the business during his senior year at Crescent Valley High School.

A display of vintage Nintendo and Super Nintendo game cartridges on display at Kontraband Retro Games in downtown Corvallis.

Daniel Kontra operates a videogame disc repair and cleaning machine at his new storefront in downtown Corvallis. The device can make previously unreadable discs able to function, a key investment for a retro game merchant.