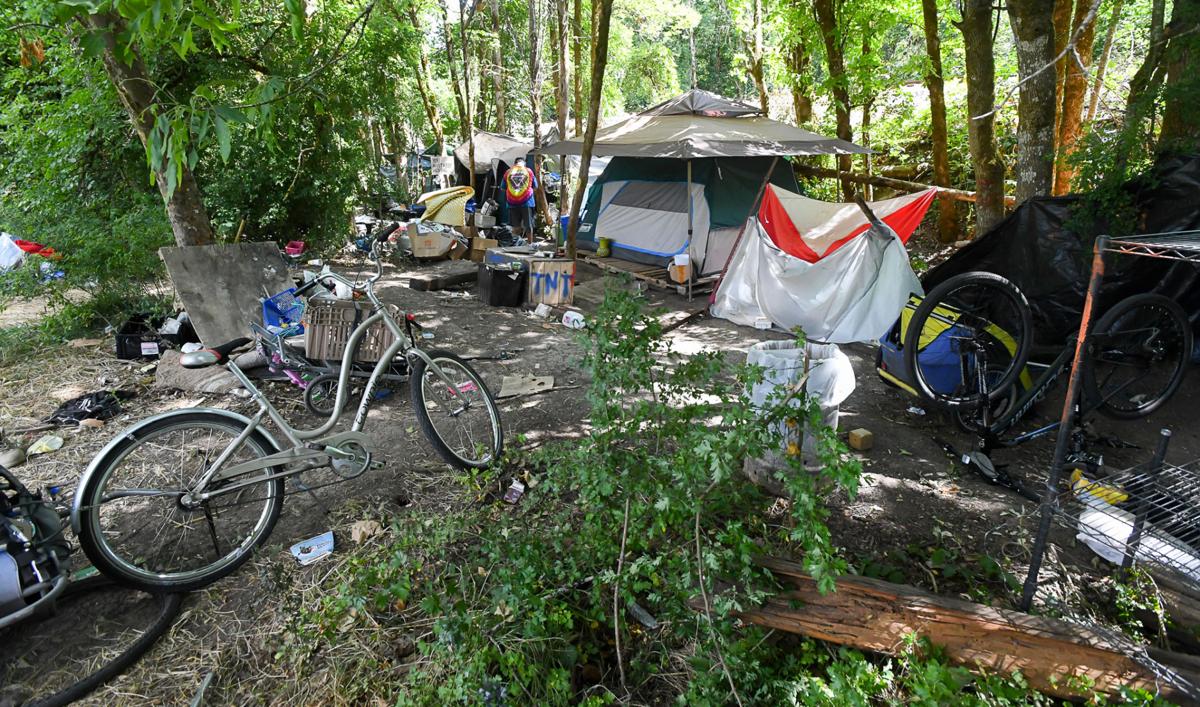 This camp, pictured Tuesday morning, sits on the west side of the Portland & Western Railroad tracks in Pioneer Park. The camp has grown in recent weeks as camps elsewhere have been cleaned up by city and Oregon Department of Transportation crews. 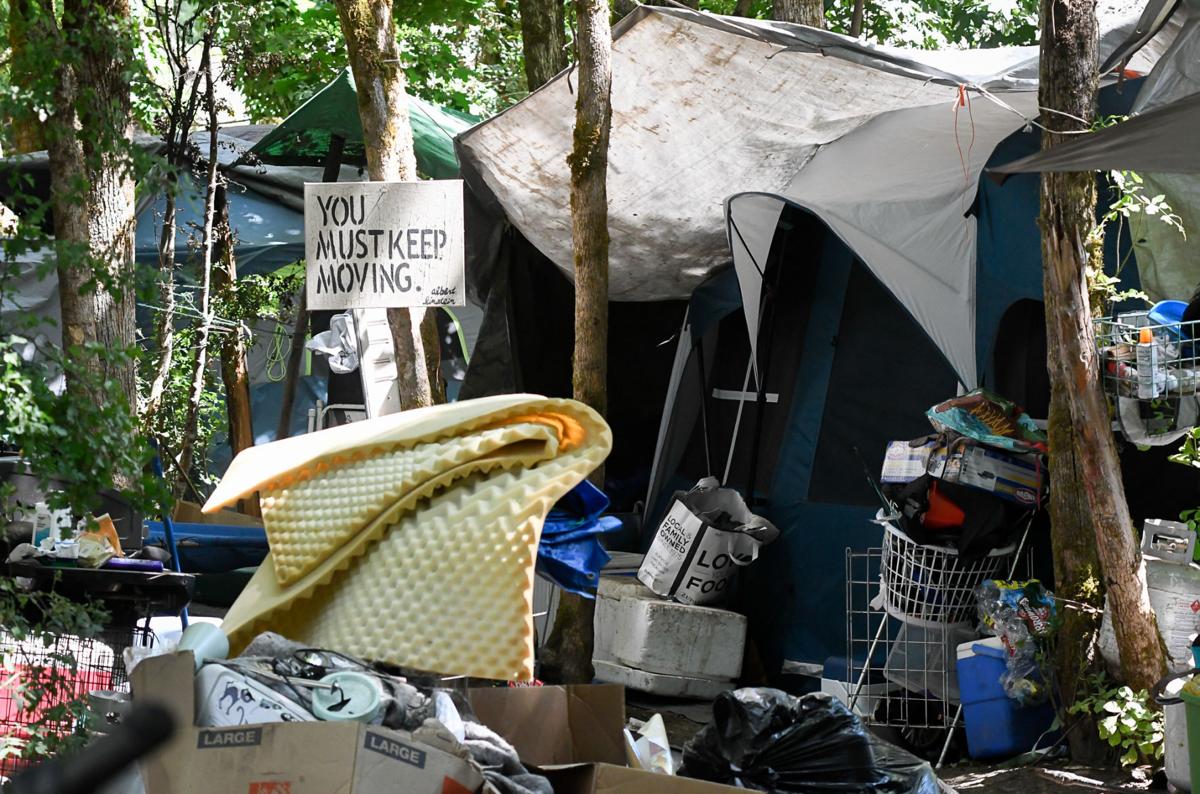 "You Must Keep Moving" says a sign seen in a homeless camp on the west side of the Portland & Western Railroad tracks in Pioneer Park on Tuesday morning. 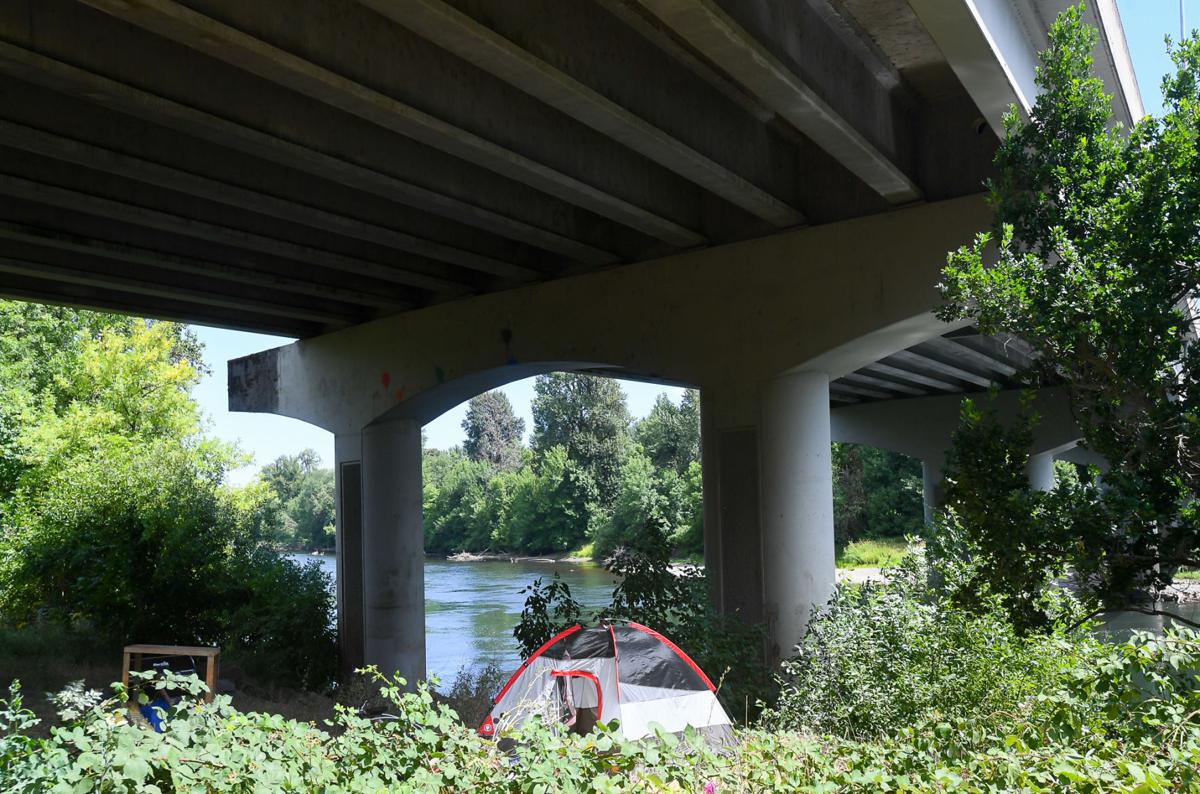 Just one tent could be seen Tuesday under the Highway 34 bypass near the skate park in Corvallis. 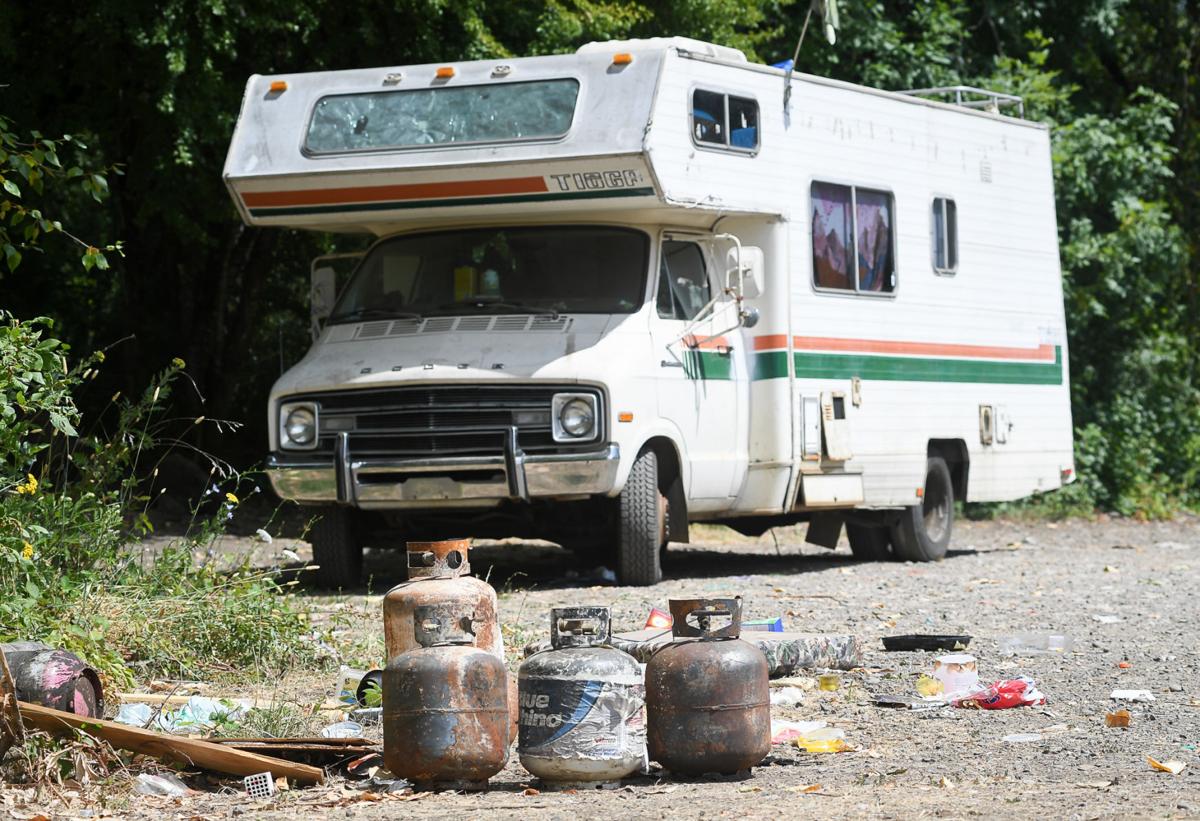 A recreational vehicle was parked near the BMX track in Corvallis on Tuesday morning. 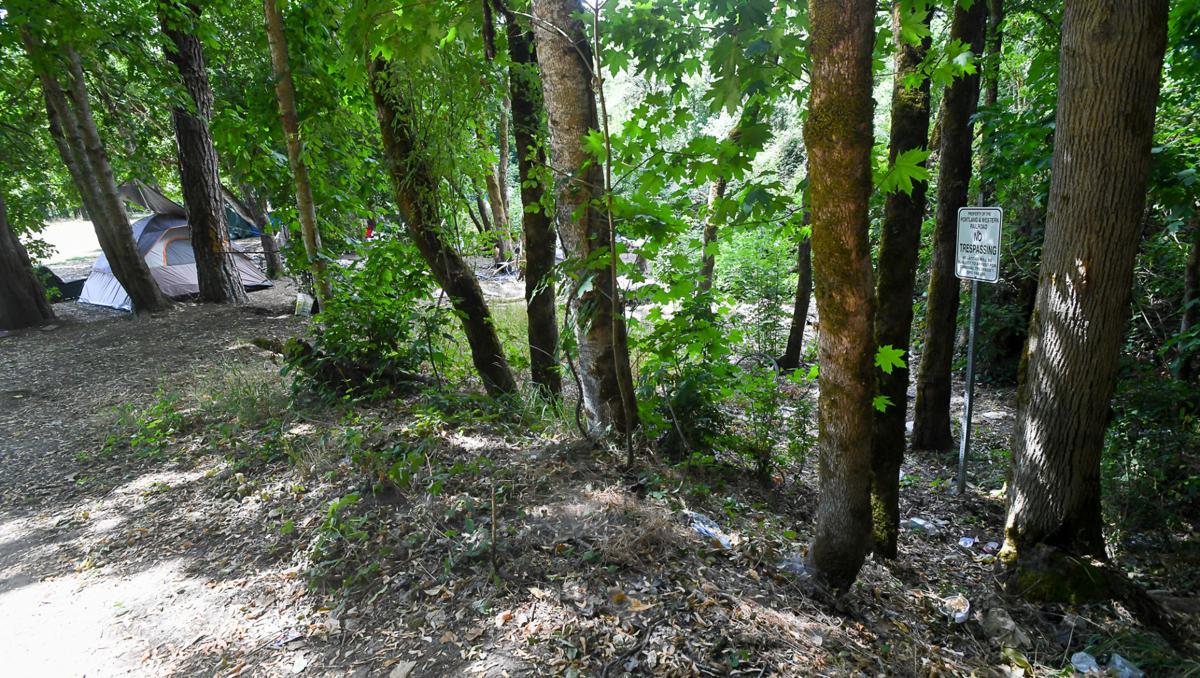 A no trespassing sign can be seen near a homeless camp on the east side of the Portland & Western Railroad tracks in Pioneer Park on Tuesday morning. 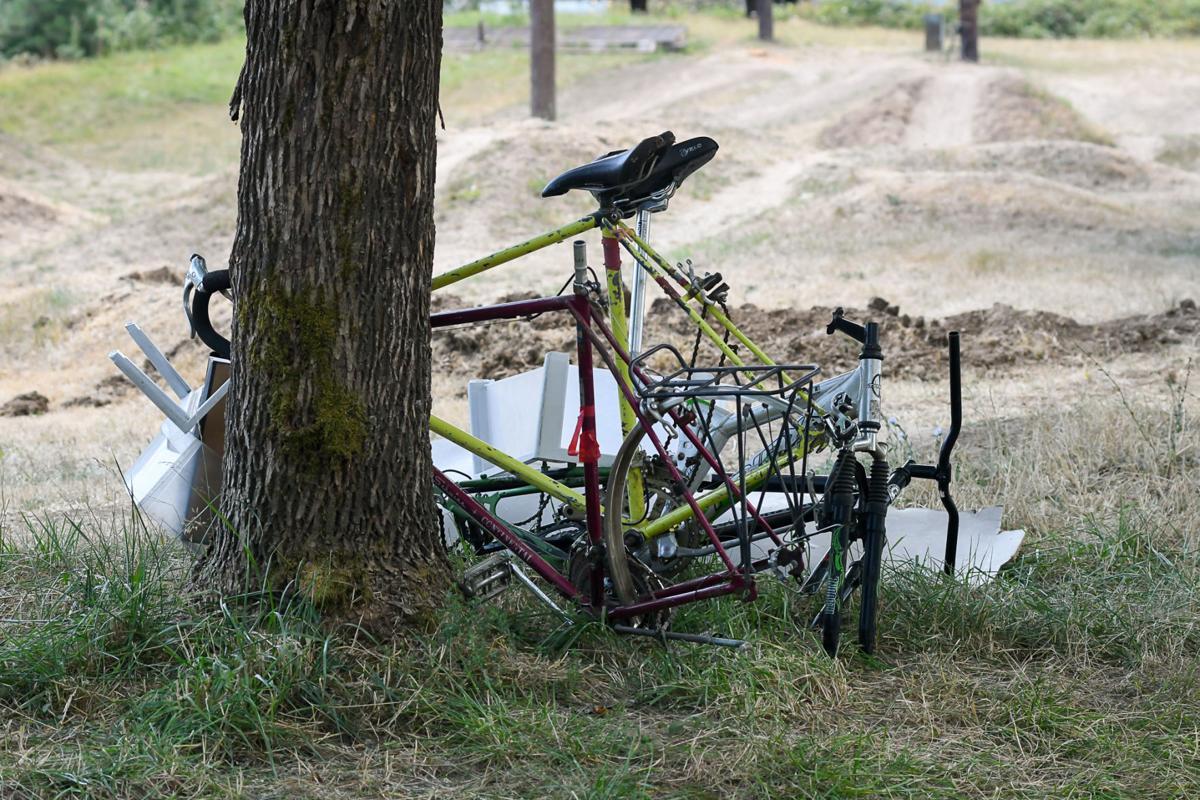 Bicycle parts were piled up near the BMX track in Corvallis on Tuesday.

Corvallis will continue its posting and cleanup of homeless camps on city property.

The Corvallis City Council voted 6-2 at Monday night’s remote meeting to reject a motion from Ward 2 Councilor Charles Maughan that would have rescinded the cleanups.

Maughan’s earlier motion to stop the cleanups was tabled (postponed) at the July 6 meeting because the matter was not on the agenda. The council has been under pressure from community members to discontinue the sweeps because of the challenge of where else the campers can go.

After a lengthy discussion, including four pieces of oral testimony from residents, councilors voted to continue to post the camps. Ward 5 Councilor Charlyn Ellis was the lone councilor to vote with Maughan, although several councilors said they were torn by the matter and praised Maughan for bringing it forward.

Napack led the way during the discussion on Maughan’s motion.

“We can’t go back to putting people in the parks,” Napack said. “That’s just not right. I don’t condone people being moved, but we can’t allow a free for all. I’ve seen safety issues. I’ve seen piles and piles of bike parts and trash. Residents are being intimidated away from using public parks in their own neighborhoods.”

“People also have a right to live,” countered Maughan. "Please look at this issue with compassion. You don’t know what it’s like to be in their shoes. This is a hard decision and this is not going to be the end of it. We need new resources and we need a new path. Stopping the public camps is not the way to do it.”

Napack also became the first councilor to confront head-on some of the provocative comments on the cleanups that have been aired during public testimony at recent council meetings. "Bulldozing neighborhoods" has come up often, with an Oregon State University doctoral student using Monday's meeting to call ODOT's inmate crews "imprisoned slave laborers."

Napack decried the misinformation that was being disseminated and called the comments "incendiary."

Three additional motions were proposed following the vote on Maughan’s motion. Councilors a) unanimously backed a Chaplen motion to direct city staff to develop a system to safely store the belongings of homeless people during the day; b) unanimously backed a Shepherd motion that will maximize distribution of the guidelines on homelessness that stem from the Martin vs. Boise court decision; and c) rejected on a 5-3 vote a Chaplen motion that would have encouraged the formation of a city/county working group on shelter needs.

City crews and those of the Oregon Department of Transportation have been cleaning up camps since mid-May, with Pioneer Park, the BMX area, Shawala Point and the skate park, the Orleans-Berg natural areas and Willamette Park the main targets. According to city staff a total of 85 camps have been cleaned up.

Pioneer Park, however, also includes Portland and Western Railroad (PNWR) property which has not been cleared. According to the staff report for the council meeting “the railroad has neither displayed nor communicated an interest or intention to post or clean camps on their property.”

"Any unauthorized access of railroad property poses a safety issue — for both trespassers and our employees," said Tom Ciuba, a spokesman for Genesee and Wyoming Railroad, the parent company of PNWR. "As small businesses, short line railroads such as the Portland & Western don’t employ their own police force and rely on local law enforcement to keep unauthorized people off our property. Law enforcement in Corvallis is aware of the camps along our tracks and is working with us to remove them. We are appreciative and supportive of their efforts."

A Gazette-Times tour of the area Tuesday showed perhaps two dozen camps, with tents on both sides of the tracks. A camper told the newspaper that there had been a strong influx of new arrivals once the city and ODOT crews had finished work on their camps.

The BMX and skate park areas contained just three camps, which leaves the occupants of about 60 camps unaccounted for.

Shawn Collins, the former Housing Opportunities Action Council project manager who now supervises the men’s shelter on Southeast Chapman Place, noted that the shelter, which has 36 beds, still has room, although spaces in the micro shelters and the old Corvallis Budget Inn have a waiting list of more than 100 names.

A challenge for those looking to move into the shelter, Collins said, is that it was built for winter use, has no air conditioning and can be quite warm in the summer months. It also has limited storage ability, which can be a deterrent to overnight guests.

"Our occupancy at the shelter goes up and down," Collins said. "It's kind of mysterious. Who knows why people go in and out? Sometimes at the end of the month someone will get some new funds and go to a hotel for a couple of nights. But we definitely do not have enough beds in town to accommodate everyone who is camping."

Collins said that his sense was that many of those who are camping move deeper into the woods during sweeps, with those in the Orleans and Berg areas moving farther south along the river south of the Highway 34 bypass.

“That’s kind of uncharted territory,” Collins said, “and it can really be hard for folks in those camps to get any social service support.”

Collins also expressed concerns about the viability of Chaplen’s motion on mandating daily storage of the belongings of homeless individuals.

“Storage is a really tough issue,” he said. “The city has discussed it with two or three providers and it has not been received warmly. There are liability issues. What if there are stolen goods or drug paraphernalia? Who owns it? And the last thing you want to do is fill a big, warm, stuffy metal container full of wet clothes.”

Here is the language of the motion on discontinuing homeless camp cleanups as proposed by Ward 2 Councilor Charles Maughan: To rescind the council’s previous motion made on April 5, 2021 to begin enforcing illegal camping ordinance May 15, 2021 until city and/or county staff can present to council options for a designated camp site or sites. All other previous motions regarding posting of camps to remain in effect.

The Oregon Department of Transportation worked through the day Wednesday to clean up illegal camping sites on its property in Corvallis.

The Corvallis City Council authorized the city Monday night to spend up to $40,000 in council discretionary funds on cleaning up illegal campsites.

Weeks before the end of federal unemployment benefit programs on Sept. 4, Oregon Employment Department officials have shifted their efforts to…

Advocates who disagree with city of Corvallis policies on homeless camp cleanups plan to protest Thursday.

Although there were no action items on the agenda devoted to the topic, homelessness remained the main topic for discussion at Monday night’s …

The Corvallis City Council passed a pair of motions Monday night aimed at reducing issues with restrooms in city parks.

This camp, pictured Tuesday morning, sits on the west side of the Portland & Western Railroad tracks in Pioneer Park. The camp has grown in recent weeks as camps elsewhere have been cleaned up by city and Oregon Department of Transportation crews.

"You Must Keep Moving" says a sign seen in a homeless camp on the west side of the Portland & Western Railroad tracks in Pioneer Park on Tuesday morning.

Just one tent could be seen Tuesday under the Highway 34 bypass near the skate park in Corvallis.

A recreational vehicle was parked near the BMX track in Corvallis on Tuesday morning.

A no trespassing sign can be seen near a homeless camp on the east side of the Portland & Western Railroad tracks in Pioneer Park on Tuesday morning.

Bicycle parts were piled up near the BMX track in Corvallis on Tuesday.