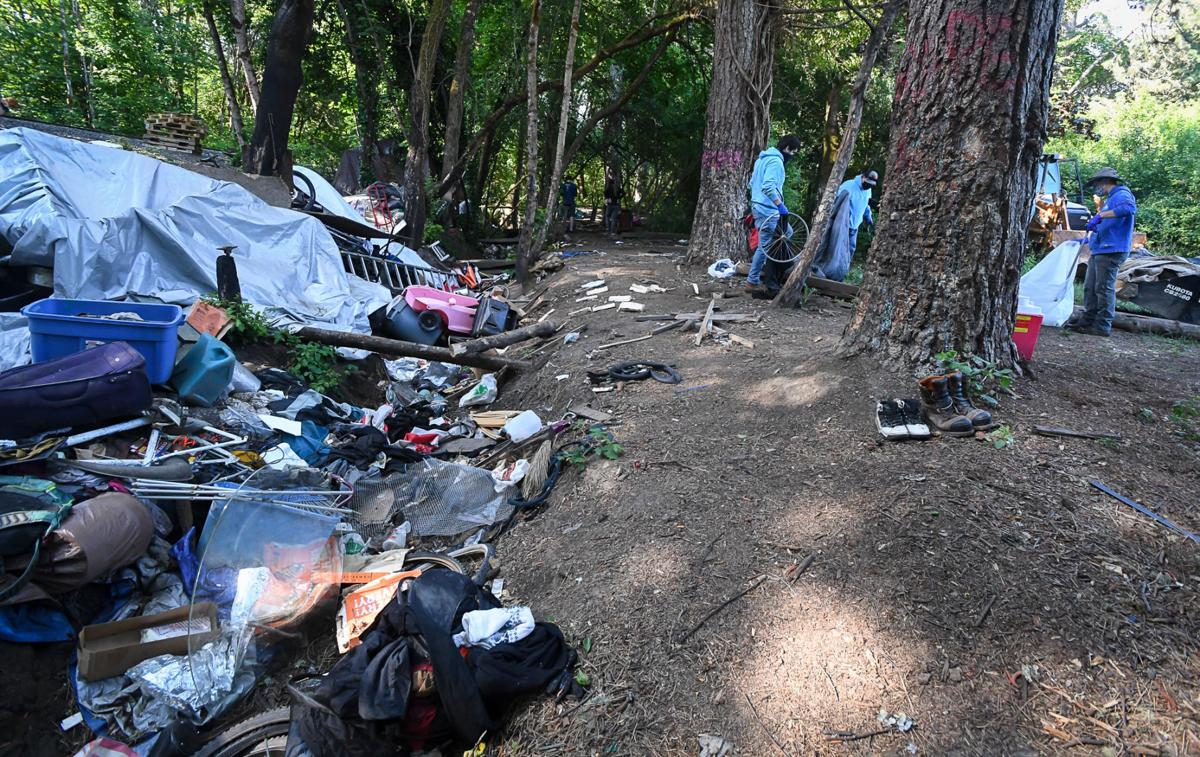 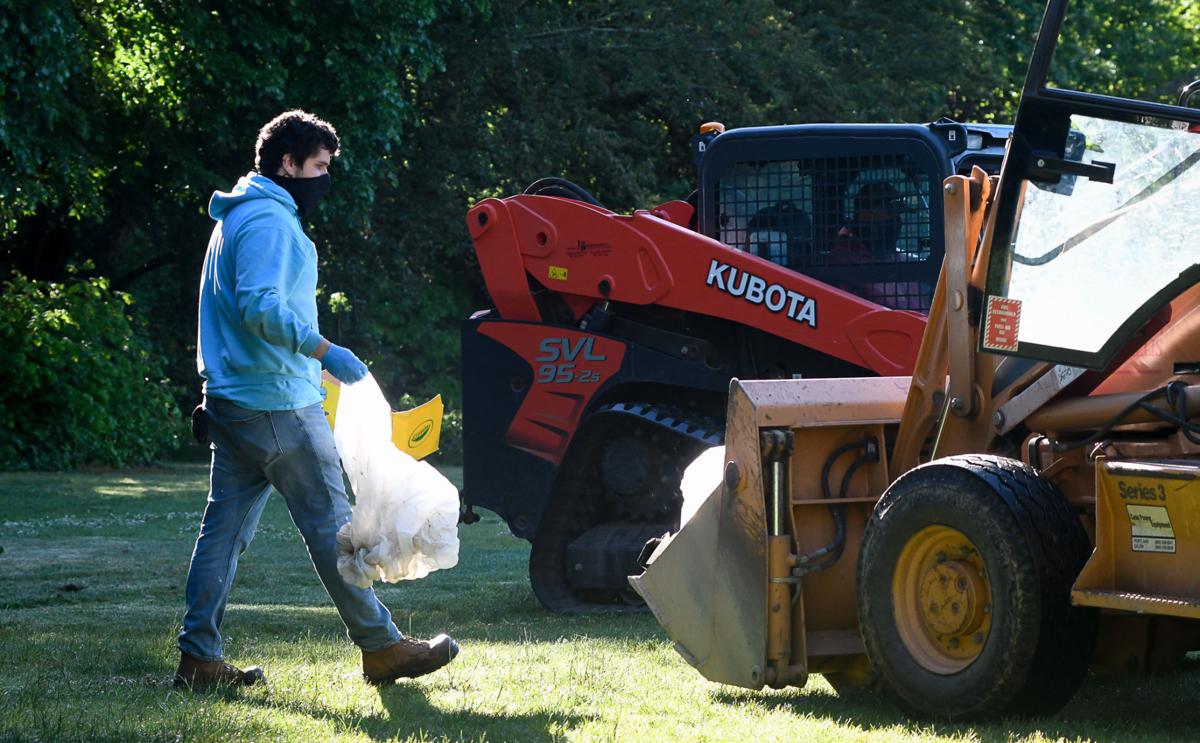 Joshua Kruckewitt with Corvallis Parks and Recreation helps clean a former homeless campsite at Pioneer Park on Wednesday morning. A Bobcat tractor from Parks & Rec and a backhoe from Public Works, as well as several dump trucks, were used during the operation. 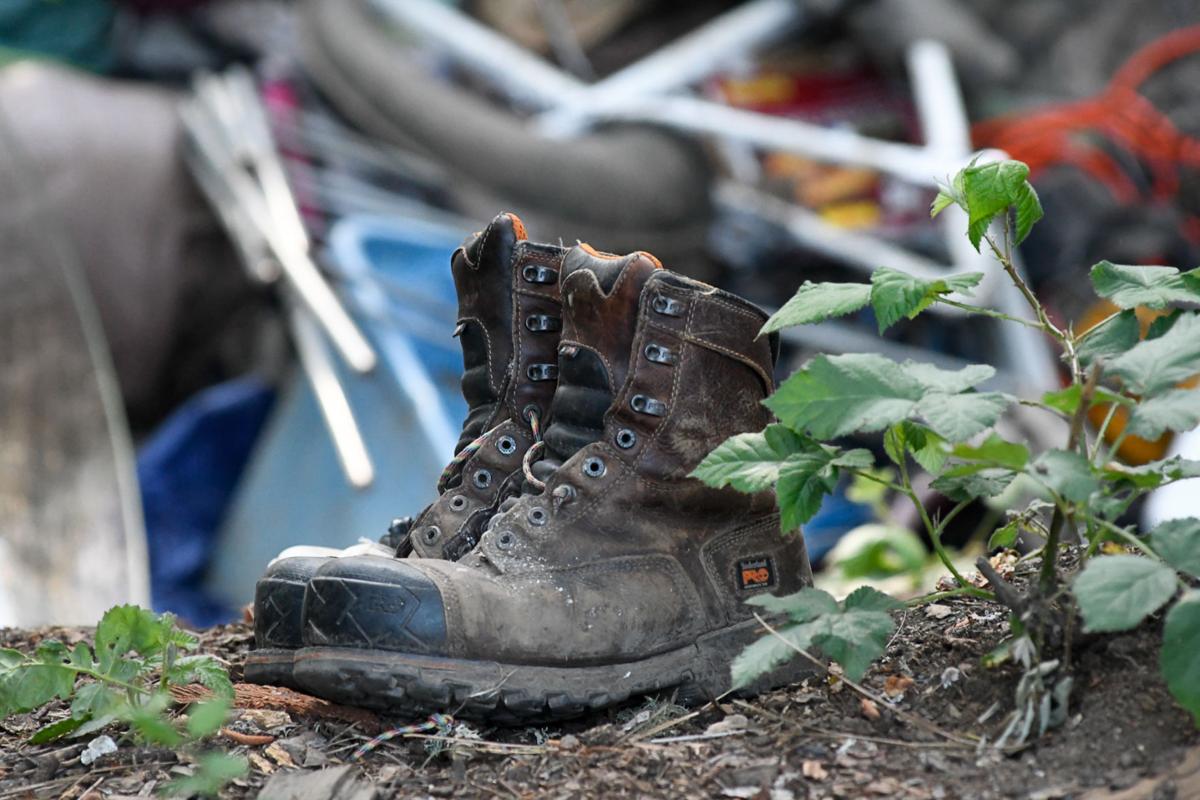 A pair of boots were left at a homeless campsite on the edge of Pioneer Park on Wednesday morning. 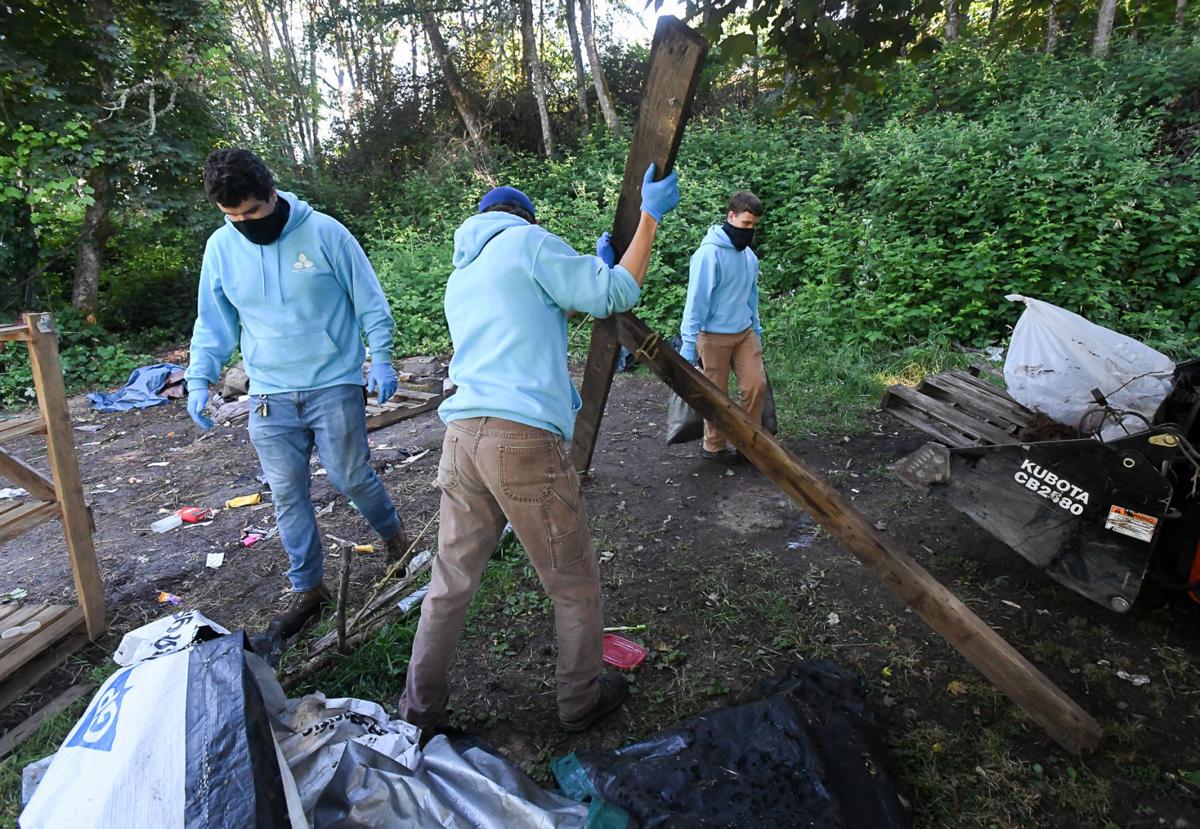 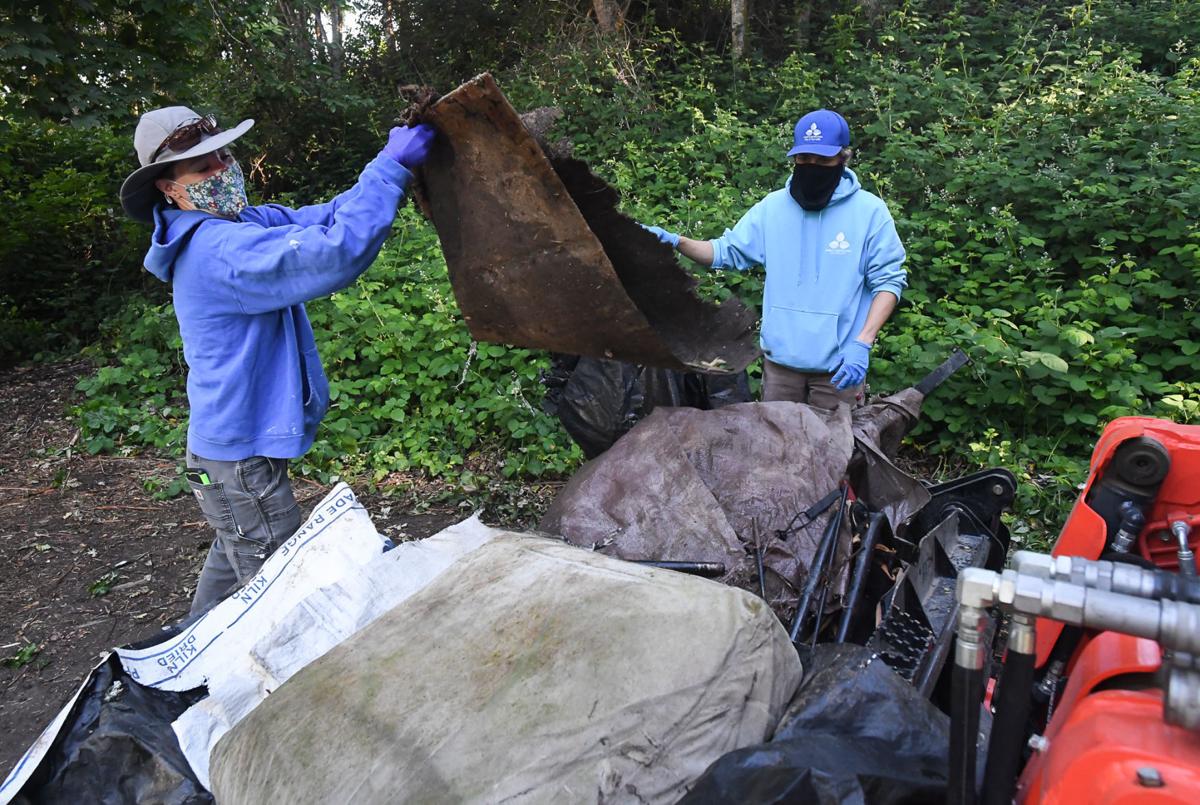 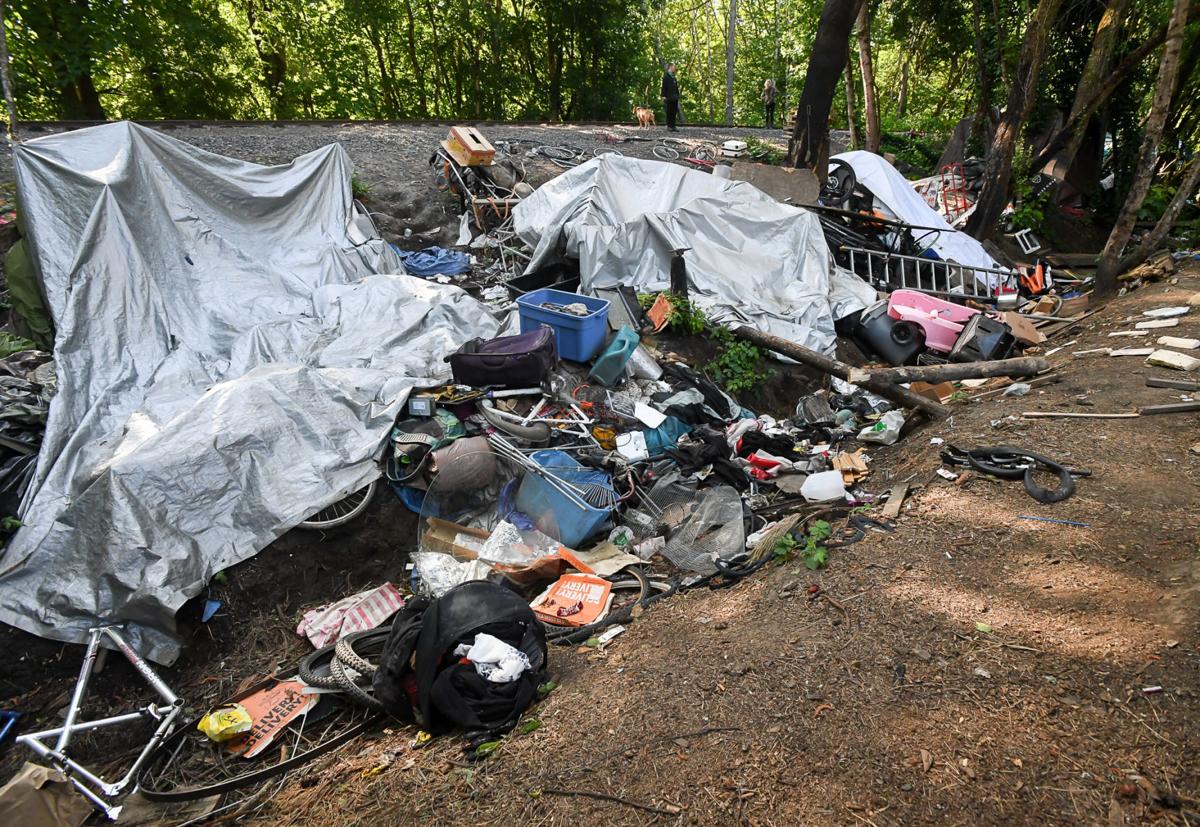 Trash and homeless campsites are shown on railroad property that borders Pioneer Park in Corvallis.

Corvallis Parks and Recreation Department crews and vehicles plus a backhoe from Public Works set out Wednesday on a mission to clean up homeless camping sites.

The day's project was Pioneer Park. Next week city crews and others from the Oregon Department of Transportation will work the area near the BMX track. The following week it will be Shawala Point and the south riverfront area in another ODOT/city collaboration.

These sorts of cleanups in Corvallis were put on hold at the start of the coronavirus pandemic amid concerns over transmission of the disease among the homeless population. But on April 5, the City Council authorized an appropriation of $40,000 to Park & Rec to resume the work.

The council acted because of increased vaccination efforts among the homeless has lowered concerns about COVID-19 transmission and a there was a sense from the community that the trash and livability problems associated with the camps were becoming intolerable. The department is using the money to hire casual workers to staff the crews and to pay for the additional dump fees.

Parks & Rec started last month with enforcement of camping bans within 50 feet of sidewalks, trails and pathways within city parks and natural areas. As of May 15 all camping in city parks, which remains illegal under city code, is subject to posting and cleanups.

The work proceeds in three phases. A pre-posting via a stake in the ground with a notice that advises campers that they are going to have to move in two weeks, then individual dated notes on the tents with a week to go … and then cleanup day.

“Some of the campers have been out here for more than a year,” said Jude Geist, supervisor of park operations. “We don’t want to shock them and say you have to be out tomorrow.”

The crews, aided by the backhoe and a Parks & Rec Bobcat, took out a compound of several tents that was nestled into a ridge behind the Pioneer Park ball field.

The campers had used the frame of an obsolete swing set to anchor their campground. The residents were long gone, Geist said.

How many people lived there?

“There were four or five tents,” he said, “and there were likely multiple people in each one … but we just don’t know.”

Lumber was used for the compound’s framing, and the staffers had to use power tools to pry the boards apart.

The crews are required to save items that appear to be “personal belongings” for 30 days at the Parks & Rec compound at Avery Park. One of the casual staffers is taking pictures with a tablet computer to document the site. A biohazard container is available for sharps. Oddly enough, a potted plant was discovered in the middle of the camp, with the pot also serving as an ashtray. There was standing water in the final three-room tent, which immediately transitioned it to the trash pile.

“Most of the camps don’t have much in the way of personal belongings,” Geist said. “Most of them just move on to another camp, taking stuff of value with them.”

The crew and vehicles then moved east a few hundred feet, past the ball field to the edge of the Portland & Western Railroad tracks. Here is where it gets sticky.

Because the city and P&W were not able to synchronize their schedules, Wednesday’s operation had to stop at the railroad property line, a trash-filled ditch that then rose at a moderate grade up the ballast of the elevated rail line.

A handful of campers were frantically moving their gear from the city side of the ditch to the railroad side. The city crews could only pick up and haul away that which was left behind, while the campers watched from the railroad tracks. The area was the scene of a propane fire last July, and fire safety and keeping material from the ditch out of the Marys River are Geist’s highest priorities.

“ODOT and us, we try to work together,” Geist said of the challenge of cleanups without railroad support. “Otherwise campers can just move five feet away on the other side of the property line.”

As they did Wednesday, leaving the city crews marooned on the park side of the ditch, which marks the end of the city’s jurisdiction.

Geist is asked if these people will be back on the other side tomorrow morning.

“They could be,” he said. “We know who has been here. It might change the situation if it was new campers. Or they could go someplace that could drive where we do our next cleanups. Some will find temporary housing, some will go out of town and some will go other places to camp.

“It’s a difficult solution for all of us. I don’t know what the big picture answer is.”

Communities in Louisiana come together after disaster

One of the biggest challenges faced by those seeking to vaccinate the population is reaching the hard-to-reach.

The Corvallis City Council authorized the city Monday night to spend up to $40,000 in council discretionary funds on cleaning up illegal campsites.

Funding to the rescue: Homeless service providers to share $2.6M

Social service providers who focus on the homeless have received a new shot in the arm.

Officials working to put together a managed camping facility near the BMX track in Corvallis had spent nearly $90,000 of the $125,000 in feder…

The Oregon Department of Transportation worked through the day Wednesday to clean up illegal camping sites on its property in Corvallis.

Corvallis will continue its posting and cleanup of homeless camps on city property.

Advocates who disagree with city of Corvallis policies on homeless camp cleanups plan to protest Thursday.

The Corvallis City Council passed a pair of motions Monday night aimed at reducing issues with restrooms in city parks.

Joshua Kruckewitt with Corvallis Parks and Recreation helps clean a former homeless campsite at Pioneer Park on Wednesday morning. A Bobcat tractor from Parks & Rec and a backhoe from Public Works, as well as several dump trucks, were used during the operation.

A pair of boots were left at a homeless campsite on the edge of Pioneer Park on Wednesday morning.

Trash and homeless campsites are shown on railroad property that borders Pioneer Park in Corvallis.