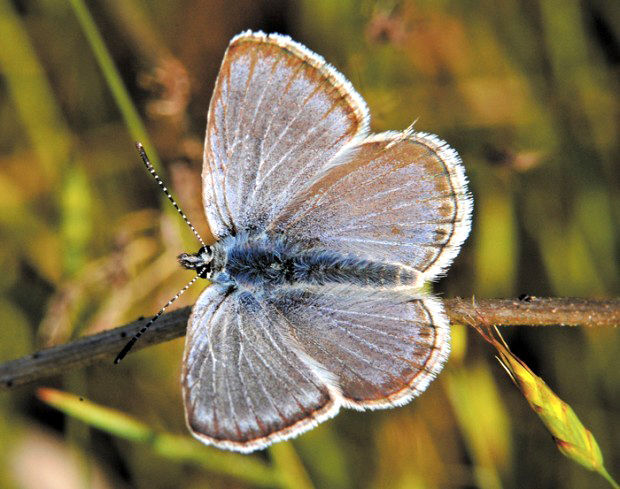 A male Fender’s blue butterfly has actually expanded its range into Yamhill and Washington counties, giving the species restoration efforts a boost. 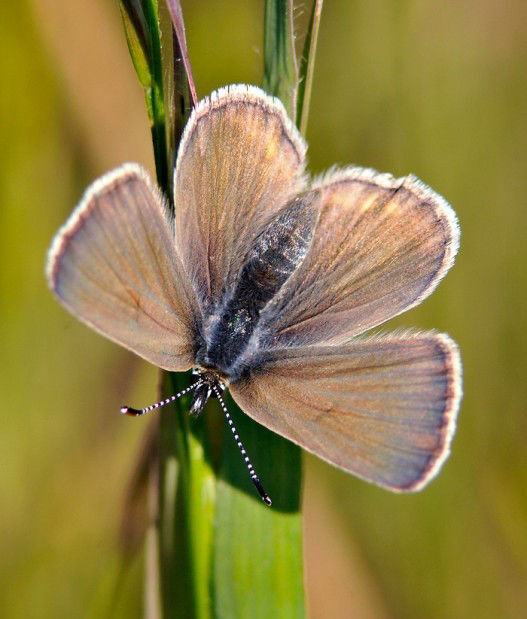 Here is a look at a female Fender’s blue butterfly. The species is making a comeback in the Willamette Valley. 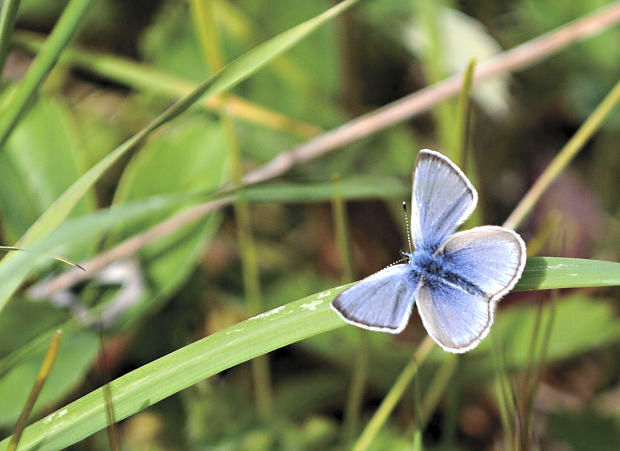 A Fender's blue butterfly rests in a restored upland prairie at the Finley National Wildlife Refuge south of Corvallis. Other spots where it thrives include Basket Slough in Polk County and Fern Ridge in Lane County. 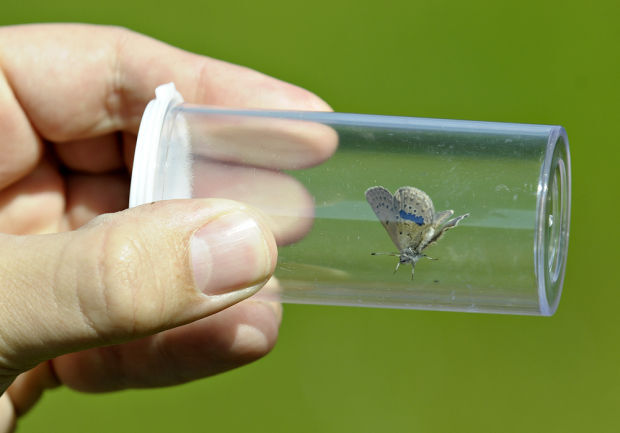 A female Fender's blue butterfly is shown before being released on Pigeon Butte in the Finley National Wildlife Refuge in May of 2014.

A butterfly that’s native to the Willamette Valley, once thought to be completely extinct, has rebounded in the last 20 years. In what’s being called a major win for conservationists, populations of Fender’s blue butterfly are now doing well enough to be potentially downgraded from ‘endangered’ to ‘threatened.’

That distinction may seem small to some but it’s rare for populations to bounce back in general, even rarer to do so in just a couple of decades. Experts say that the victory shows how partnerships between conservation groups, local governments and property owners can lead to success stories for native species.

“This is a big win for conservation because it means we can essentially improve conditions for the endangered species to the point where they can be downlisted or even removed from the endangered species list,” said Tom Kaye, executive director for the Institute of Applied Ecology in Corvallis. “That’s amazing. That means we can use science and collaboration that not only improve the habitats for these species but also for human landowners.”

Before digging into just how the recovery happened, some background helps. Fender’s blue was first described in 1931 by biologist Ralph Macy, who named this subspecies of butterfly after his entomologist friend, Kenneth Fender. A subspecies of blue butterfly that’s native to Montana and Idaho, Fender’s blue is an Oregon species that was thought to be extinct shortly after its discovery because populations weren’t seen for decades afterward. In 1989, the first populations were found in Benton County. It was added to the Endangered Species Act list in 2000.

Since then, it’s fallen to agencies such as the U.S. Fish and Wildlife Service and the nonprofit Institute for Applied Ecology to try to get the butterfly populations to rebound. The problem is, the land that comprises the Willamette Valley is almost entirely held by private landowners, so conservation required a massive amount of coordination and cooperation between a series of parties.

“The (U.S. Fish and Wildlife) Service would not necessarily be able to recover a species like Fender's blue without working with partners … and protecting (this species) also helps other species that are endemic to the Willamette Valley,” said Jennifer Siani, recovery coordinator for the U.S. Fish and Wildlife Service in Portland. “We want to keep landowners working while conserving endangered species.”

In order to bolster an a species' population, you need to protect its habitat. Many of the struggles of Fender’s blue have stemmed from a lack of access to lupine, a key plant it uses at every stage of its life cycle. There are three varieties of lupine that the butterfly uses to lay its eggs and spin its cocoons on, but the one most endemic to Oregon is Kincaid’s lupine.

While activities such as urbanization, seasonal forestry practices and general human encroachment all have played a factor, the single greatest threats to the lupine that Fender’s blue relies on are the non-native grasses and shrubs that have overtaken the prairies.

As settlers brought new types of grass seed to the Willamette Valley, these non-native plants acted as weeds that encroached on the lupine’s territory and made it compete for sunlight and soil like it never had before. Things such as tall fescue have been particularly competitive against the habitats that Fender’s blue relies on.

“There are a lot of non-native plant species that are invading prairie habitats,” Siani said. “Fender’s blue rely on Kincaid’s lupine … (to) lay their larvae on and rely on them for all parts of their life cycle. Lots of tall oat grass and tall fescue … they grow really tall and shade out the lupine from the sun.”

As such, a key piece of the conservation effort involved educating local farmers on how to manage populations that threaten lupine. Agencies helped farmers, foresters and other families and businesses with ways to mow their fields and tend their forests in ways that wouldn’t wipe out the lupine that Fender’s blue relies on.

Part of the new rulemaking under the Endangered Species Act includes specific methods for managing the land without harming sensitive populations. The process to downgrade a species on the list, called downlisting, requires rules to be drawn up after a 60-day public comment period. This rulemaking is designed to keep the necessary conservation efforts in place while a species is transitioning from endangered to threatened and, hopefully, to removal from the list.

The result of all this effort is that Fender’s blue now occupies twice the acreage it did in 2000, when it was first listed. Its overall population has quadrupled.

Strong populations can now be found in the Mary’s Peak Wilderness Area in Benton County, in the Baskett Slough National Wildlife Refuge in Polk County, and at the Fern Ridge Wildlife Area west of Eugene. A new population has even popped up in parts of Yamhill and Washington counties, which is the furthest north these butterflies have ever been found.

Conservationists say that the mammoth effort wouldn’t have been successful without the cooperation of many different groups. Oregonians — and residents of Benton County, specifically — have been crucial to the undertaking, they say.

“Benton County has had an important role in the conservation of Fender’s blue for many years,” said Kaye of the Institute for Applied Ecology. “We were the main contractor that worked with Benton County and the Department of Fish and Wildlife. That alone has had a huge impact in our ability to preserve habitats that have been crucial for conservation.”

While officials say some of the success of the restoration effort for this particular butterfly may be because it’s pretty, with its bright blue wings in males and blue-tinted furry bodies in females, the result is a triumph for environmentalists. Also important is the growing population of people up and down the Willamette Valley who are perceptive to the kinds of things that are necessary for habitat conservation.

“Oregon is really making amazing strides in recovering listed species,” said Siani. “It’s a tremendous amount of effort. But we can get this butterfly off the endangered species list entirely, as long as we can improve the prairie habitat.”

First discovered: documented in 1920, described to science 1931, later thought to be extinct

Named for: Kenneth Fender, entomologist and mail carrier who died in 1980

Linn County is wading into another timber lawsuit, this one related to sales of burned trees in the Santiam State Forest.

Preservation work at the Longbow Organization Camp near Cascadia is keeping the nearly century-old site looking like new. The camp, built by t…

Corvallis to the Sea Trail officially opens on Saturday

Humans aren’t the only ones that got sunburnt during the heat waves this summer — so did Oregon’s trees. The evidence of the “sun scald” can b…

Rockies winter starts with a whimper

Rockies winter starts with a whimper

A male Fender’s blue butterfly has actually expanded its range into Yamhill and Washington counties, giving the species restoration efforts a boost.

Here is a look at a female Fender’s blue butterfly. The species is making a comeback in the Willamette Valley.

A Fender's blue butterfly rests in a restored upland prairie at the Finley National Wildlife Refuge south of Corvallis. Other spots where it thrives include Basket Slough in Polk County and Fern Ridge in Lane County.

A female Fender's blue butterfly is shown before being released on Pigeon Butte in the Finley National Wildlife Refuge in May of 2014.