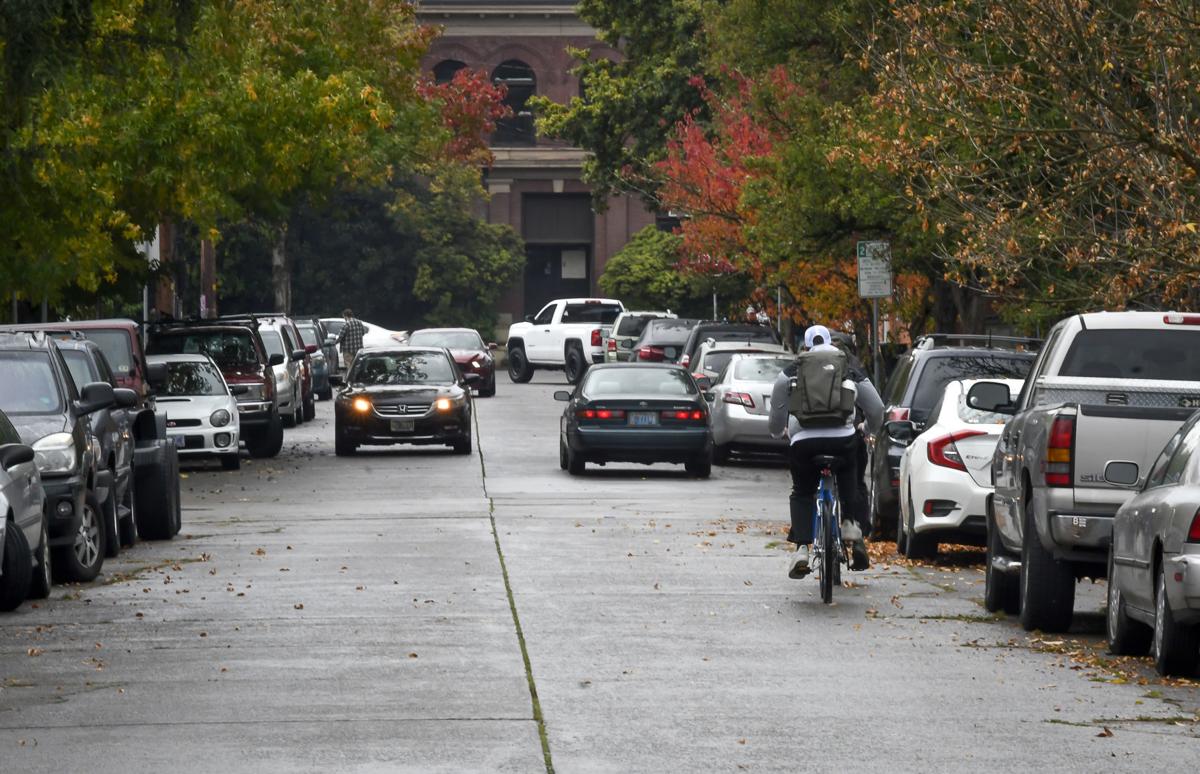 Looking south on Northwest 16th Street in Corvallis, where Genesis Hansen was stopped on Sunday by a state trooper for riding her bike on the wrong side of the street. The encounter escalated from a citation to an arrest, sparking claims of bias and excessive force. 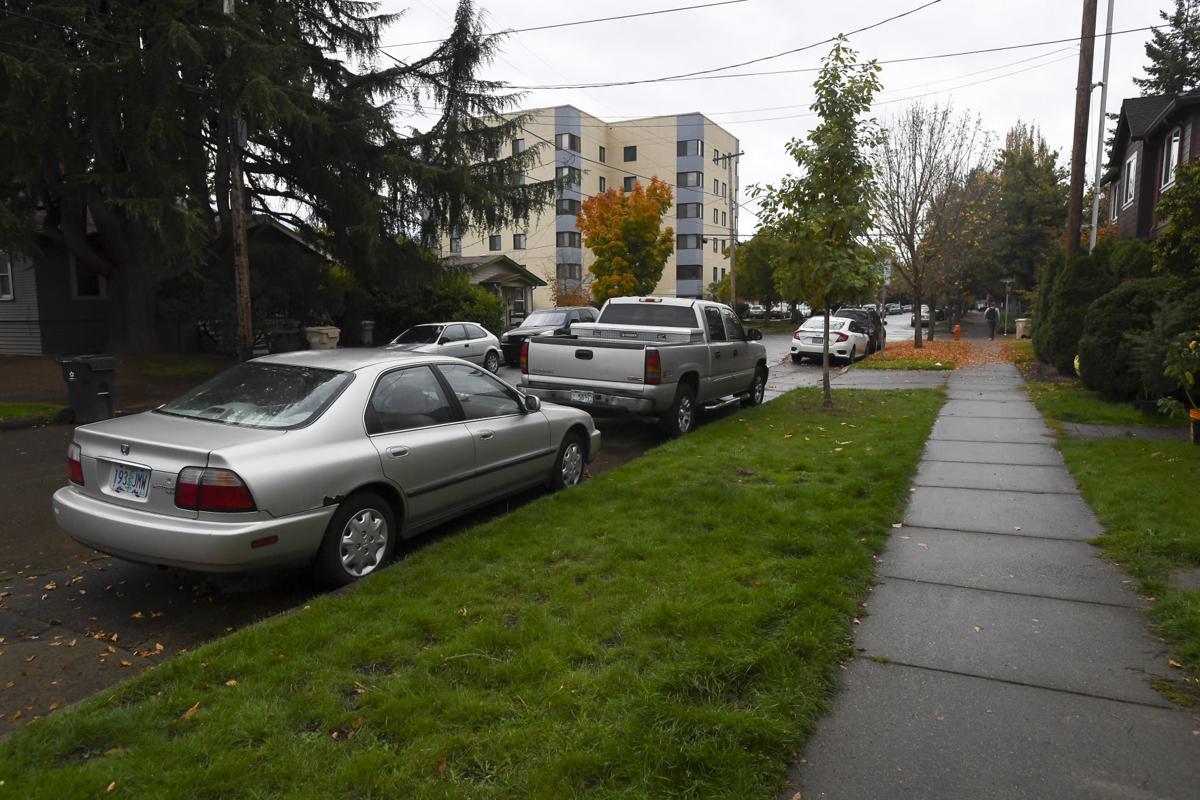 The grassy strip where Hansen was handcuffed and held down by officers. 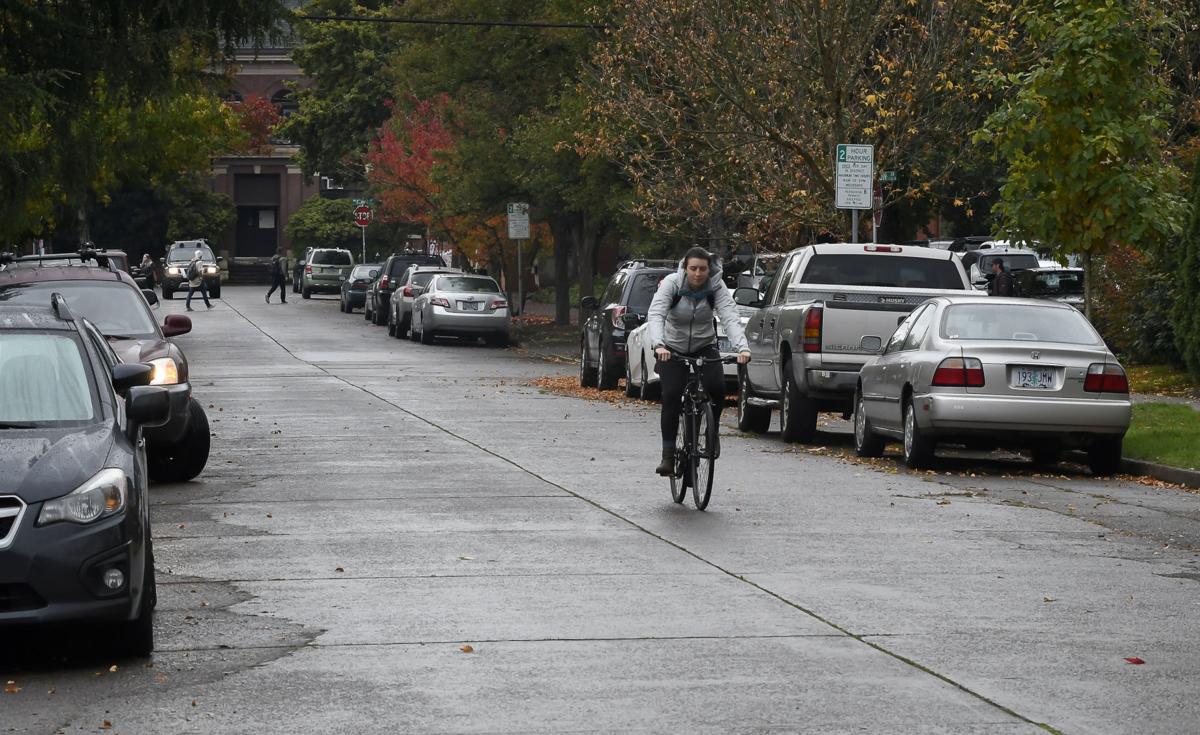 A bicyclist pedals down Northwest 16th Street on Wednesday. 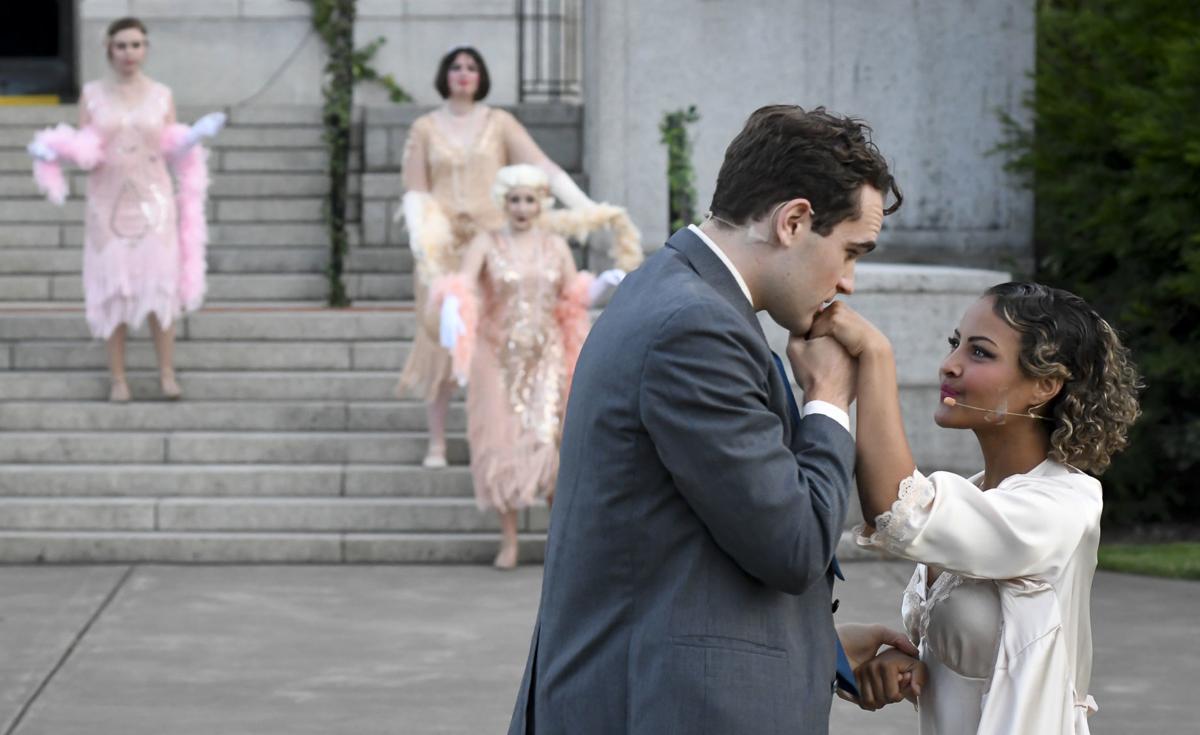 Genesis Hansen, who is minoring in theater at Oregon State University, starred as Juliet in OSU's Bard in the Quad production of "Romeo and Juliet" last summer.

A state trooper’s attempt to cite a bicyclist for riding on the wrong side of the street in Corvallis last weekend turned into a protracted confrontation that ended in the young African-American woman’s arrest and now is raising questions about racial profiling, police use of force and when citizens can refuse to identify themselves to an officer of the law.

About 2 p.m. on Sunday, Senior Trooper Kelly Katsikis with the Oregon State University substation of the Oregon State Police was on bicycle patrol when he stopped Genesis Hansen, a 21-year-old OSU student, for allegedly riding her bike the wrong way in the 200 block of Northwest 16th Street.

In body camera footage taken by Katsikis and reviewed by the Gazette-Times, Hansen can be seen disputing the trooper’s contention that she was on the wrong side of the road, pointing out that the narrow, two-way residential street has no painted dividing line (although there is a seam in the concrete running down the middle of the road).

The recording does not begin until after the initial stop, so it does not capture images of Hansen riding her bicycle. Instead, it shows her standing in the street, facing the trooper, and engaging in a lengthy discussion with him as he attempts to issue her a traffic citation for failure to drive within a lane. The trooper is not visible in the video, but his voice – along with Hansen’s – is clearly audible.

As a crowd begins to gather, including a number of people who appear to be recording the incident on their cellphone cameras, Katsikis radios for assistance from the Corvallis Police Department. After Officer Donald Sheldon arrives on the scene, all three step out of the street and the discussion continues on a grassy strip between the street and the sidewalk.

Katsikis asks to see Hansen’s identification so he can write her a citation, but instead of handing over her driver’s license, she asks the trooper to show her the law that allows him to cite her.

She also raises the implication that her traffic stop may have been racially motivated.

“I am an African-American, mixed woman … and I will say that men who are in police uniforms often abuse their power.”

The discussion continues for quite some time, with Hansen remaining calm throughout and both officers refraining from raising their voices or being physically aggressive.

Roughly 30 minutes after the encounter began, however, Katsikis issues an ultimatum: “I need you to either give me your identification now or you are going to be under arrest,” he tells Hansen. “Do you understand that?”

“I don’t answer questions,” Hansen replies, and the two officers reach out to grab her arms. At that point, Hansen begins to back up and falls to the ground, with both men landing on top of her. Based on the Gazette-Times’ viewing of the body cam video, it’s not completely clear whether she fell deliberately or was forced to the ground.

The officers then turn Hansen onto her stomach in the grass and cuff her hands behind her back as additional Corvallis police officers stand by. Hansen is put into a Corvallis police vehicle and taken to the Benton County Jail, where she is booked, cited on misdemeanor charges of interfering with a peace officer and resisting arrest, and released on her own recognizance.

The incident has produced a wide range of reactions.

Hansen declined to be interviewed for this story when contacted by the Gazette-Times, saying she had been advised not to discuss the matter at this time.

Immediately after the incident, however, Hansen had this to say on her Twitter account: “I was wrongfully arrested today and I am going to hold those people accountable.” She appended the hashtags #IDontAnswerQuestions, #excessiveforce and #inappropriateuseofpower.

OSU Vice President Steve Clark said university officials are concerned about the situation and plan to ask both the Oregon State Police and Corvallis Police Department to review their policies and practices “for evidence of implicit and explicit bias.”

“The video we observed did not appear to indicate excessive force was used; however, an individual engaged in that moment may judge what was appropriate force differently than what was observed,” Clark said.

“Bias is a perception that I, as a university representative, cannot judge,” he added. “It’s how somebody feels they were treated.”

The Corvallis/Albany chapter of the NAACP also is getting involved in the matter.

“We have met with the student and will be meeting with the Corvallis Police Department and Oregon State Police,” President Angel Harris posted on the local civil rights group’s Facebook page. “Because of the nature of the incident, conversations are underway with all parties involved which may lead to further action.”

The arrest has sparked a flurry of activity on local Facebook groups such as Corvallis People and Things Overheard at OSU, with many commenters condemning the officers involved for being too rough and others chiding Hansen for refusing to cooperate.

A story on the incident published Monday on the website of OSU’s student newspaper, the Daily Barometer, includes video clips shot by bystanders that capture the reaction of onlookers, many of whom gasp as Hansen is being restrained and begin telling officers things like “Don’t hurt her” and “Get off of her.”

The Oregon State Police has so far not released a copy of the trooper’s body cam video, despite requests from members of the news media and others, and the agency’s acting public information officer, Steve Mitchell, did not respond to interview requests from the Gazette-Times.

“This matter is currently under review,” Mitchell said in a prepared statement issued Wednesday afternoon. “It is a standard practice for our agency to review all Use of Force incidents. This incident is currently going through that process and criminal charges (have) been referred to the Benton County District Attorney’s Office.”

It’s not clear at this point, however, whether the case against Hansen will be prosecuted in court.

Benton County DA John Haroldson said Wednesday that he had not yet received all the investigatory information on the case from the state police, but based on his review of the body cam footage it isn’t clear to him that Hansen committed the crimes she was cited for. By the same token, he said the footage does not convince him that there was any racial bias or excessive force in her arrest.

“I don’t see anything (in the body cam video) that could be charged criminally by anyone,” Haroldson said.

Haroldson said a 2017 ruling by the Oregon Supreme Court in a case known as Oregon v. McNally suggests that passive resistance cannot be used as the basis for charging a person with interfering with a peace officer or resisting arrest.

And he added that Hansen may have been within her rights in refusing to show her identification.

Unlike the operator of a motor vehicle, Haroldson said, “there is no statutory requirement that bike riders must show ID if stopped for a traffic violation.”

Corvallis Police Chief Jon Sassaman declined to comment on the question of bias, in part because no Corvallis officers participated in the initial traffic stop. But he said the state trooper’s video shows no sign of excessive force.

“What I observe in the video are officers seeking to take her into custody, and then I see her drop to the ground and the officers go with her,” Sassaman said. “When arrests are made, control must be established, and that is what I see.”

He added that his department would conduct an internal review of the incident “to see where the learning points are from it.”

Both the district attorney and the police chief called on the state police to release the complete body cam footage as soon as possible, saying transparency is the best way to defuse public outrage and prevent a rush to judgment.

“There’s a lot that has happened across this country that has folks on edge,” Haroldson said.

Added Sassaman: “We have to make sure the politics in the community don’t outpace the facts.”

Body camera video from the controversial Oct. 13 arrest of an Oregon State University student in Corvallis will be released as soon as possibl…

The NAACP is condemning the Oct. 13 arrest of a black Oregon State University student who was riding her bicycle against traffic, saying Genes…

In an effort to defuse a growing controversy, the Oregon State Police made body camera video of the Genesis Hansen arrest available to the pub…

The panelists at Monday’s City Club of Corvallis discussion came from all points of the journalistic spectrum, but they all agreed on one thin…

The Oregon State Police will stop providing law enforcement services to Oregon State University by the middle of next year.

Looking south on Northwest 16th Street in Corvallis, where Genesis Hansen was stopped on Sunday by a state trooper for riding her bike on the wrong side of the street. The encounter escalated from a citation to an arrest, sparking claims of bias and excessive force.

The grassy strip where Hansen was handcuffed and held down by officers.

A bicyclist pedals down Northwest 16th Street on Wednesday.

Genesis Hansen, who is minoring in theater at Oregon State University, starred as Juliet in OSU's Bard in the Quad production of "Romeo and Juliet" last summer.