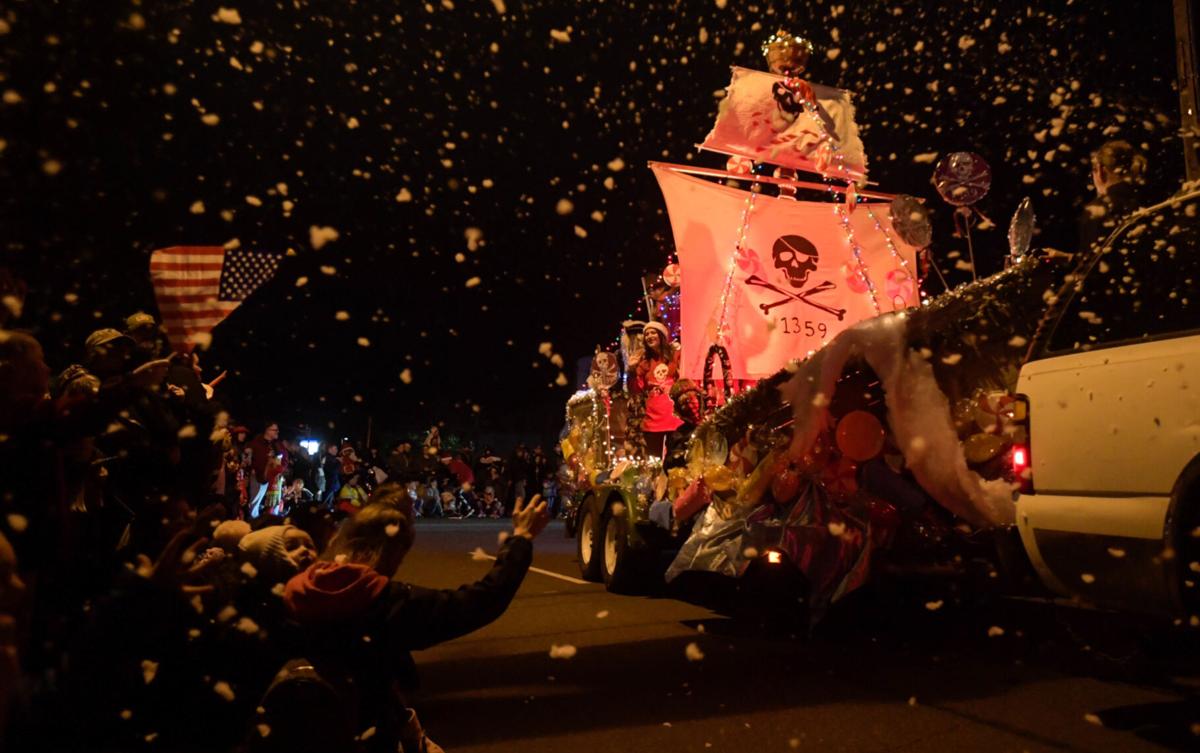 Foam rains down from The Scalawags float during Lebanon’s Twilight Parade on Saturday. 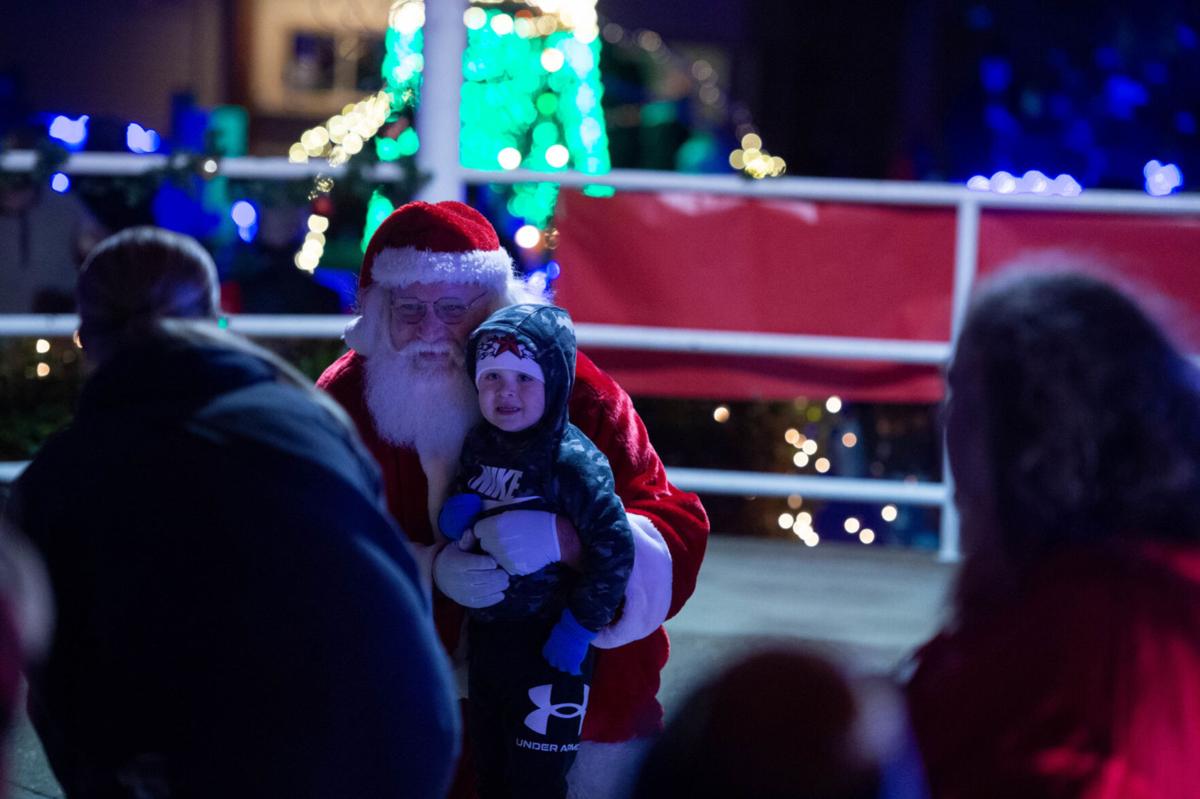 Kylan Anderson, 3, poses for a photograph with Santa following the Twilight Parade and tree-lighting ceremony. 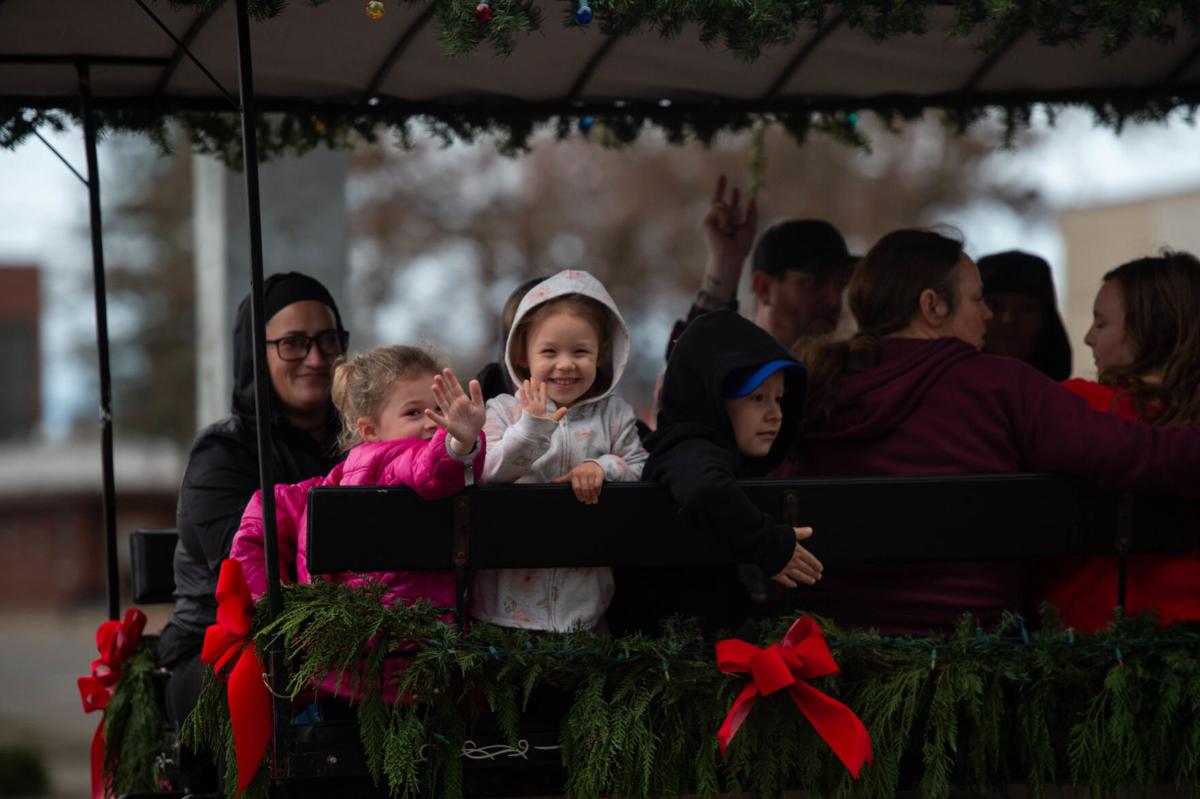 Children wave from a horse-drawn carriage ride during the Lebanon Holidays in the Park event before the Twilight Parade. 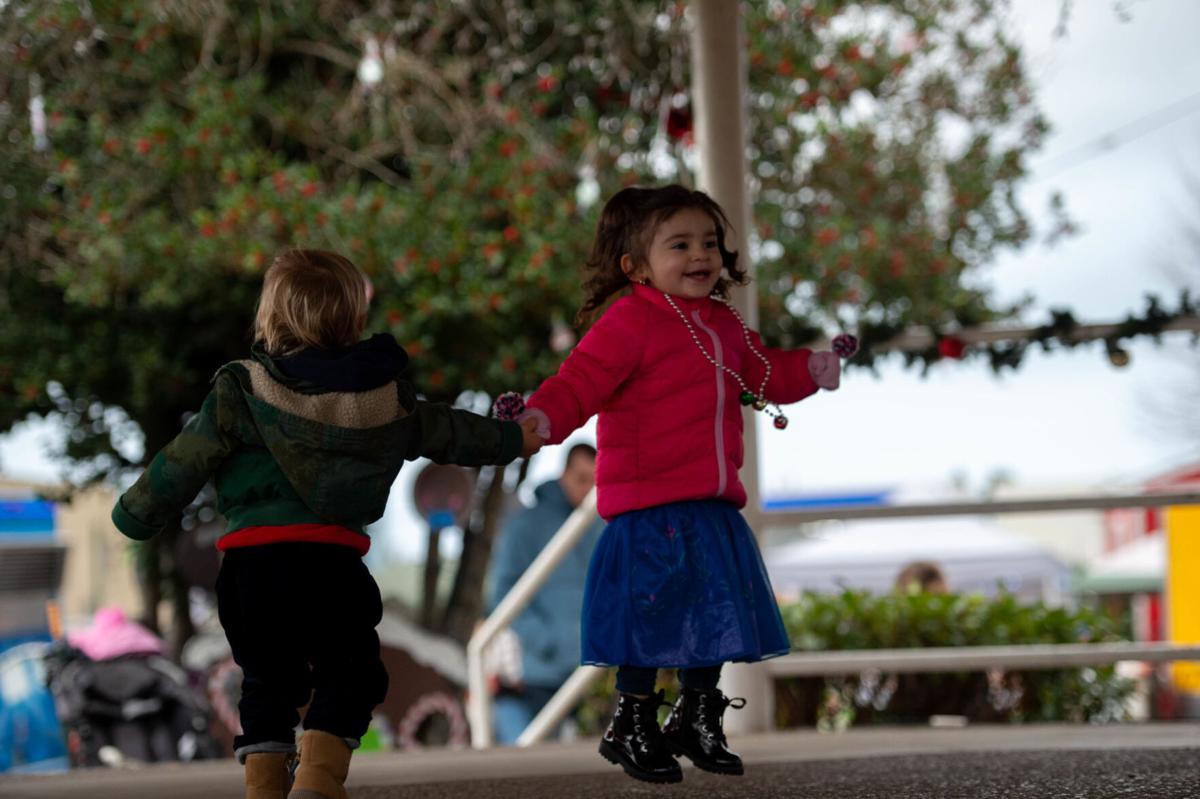 Ella Varela, right, dances during the Holidays in the Park event on Saturday.

A little rain and gloomy weather didn’t stop the city of Lebanon from kicking off the Christmas season.

Hot chocolate was in hand as local families strolled past gumdrops and candy canes in Ralston Park on Saturday. A Candyland Christmas, put on by nonprofit Holidays in the Park, took over Lebanon from the afternoon into the night.

The annual event made an exciting return this year and included local vendors, an appearance by Santa, the Twilight Parade, a tree lighting and more.

There was something for everyone at the park: horse drawn carriage rides, free hot chocolate, sweet and treats, food trucks and music.

“Seeing the kids and the families that come is the best part,” event organizer Cindy Kerby said. “Their faces light up when the tree lights go on.”

The celebration was scaled back in 2020, but was back in its usual form this year. Event organizers said it was fun seeing everyone gather together since they couldn't do that last year.

Multiple vendors lined the street, offering anything from a pastry to a fabric bag to a piece of wooden art. One booth even drew people in by asking “Do you want to win $100?”

Virginia Evans was one of the vendors. She works for the Lebanon Community School District. Evans set up her side gig, Ginny’s Pastry Shack, at the park. She said this was her fourth year at the event.

“I love to share,” Evans said. “Everything is homemade and I cook from my grandparent’s recipes and some of my own too.”

Her specialty is a cherry ring — her great grandmother’s recipe.

The park filled with community members of all ages. Some were return attendees while others were experiencing their first Holidays in the Park event.

“We’re here today because it’s the very first time as a full family and first time period,” Adam Joslin said. “I’ve lived in Lebanon my whole life and I’ve always driven by, but have never gone."

Joslin said when he was growing up, his father worked for Lebanon Fire District and actually helped put the lights on the giant Christmas tree in the park back in the day.

The lights around the park were the result of six weeks of work. Local businesses helped decorate the trees. Pacific Power provided the big Christmas tree that took center stage in the evening.

Dogs and humans alike were in holiday sweaters as they strolled through the park. The horse-drawn carriage rides had a steady line and the Christmas music had children dancing and running around.

The parade featured 24 entries. The Willamette VDub Club served as grand marshals. The parade included a pirate ship float, dancers and even a strawberry mascot. Local businesses and community members were featured. Children reached out for candy and marveled at all of the colorful lights.

The event is meant to bring the community together and signal the beginning of the Christmas season. According to event organizer Dala Johnson, the festive celebration has been happening for 25 years.

“Seeing the community come together is great,” Johnson said. “They deserve to have a great Christmas, and when everyone is here, they’re just happy.”

Holidays in the Park, a nonprofit organization, is presenting a Candyland Christmas for this year’s holiday event in Lebanon, taking place fro…

Yes, the parade is back this year. What you need to know.

Albany Christmas Storybook Land is on and it's 45 years old

Here's the schedule and how to take part in this annual tradition.

Gallery: Lebanon lights up the night during Twilight Parade

Albany's Downtown Twice Around Christmas Parade returned on Sunday, Dec. 5 with 25 entries, including Caesar the No Drama Llama, a semi-truck …

It wasn’t ideal weather for a parade. It was rainy and cold — classic Oregon weather.

As Omicron Spreads, Americans Are Going To Work Sick

As Omicron Spreads, Americans Are Going To Work Sick

Foam rains down from The Scalawags float during Lebanon’s Twilight Parade on Saturday.

Kylan Anderson, 3, poses for a photograph with Santa following the Twilight Parade and tree-lighting ceremony.

Children wave from a horse-drawn carriage ride during the Lebanon Holidays in the Park event before the Twilight Parade.

Ella Varela, right, dances during the Holidays in the Park event on Saturday.