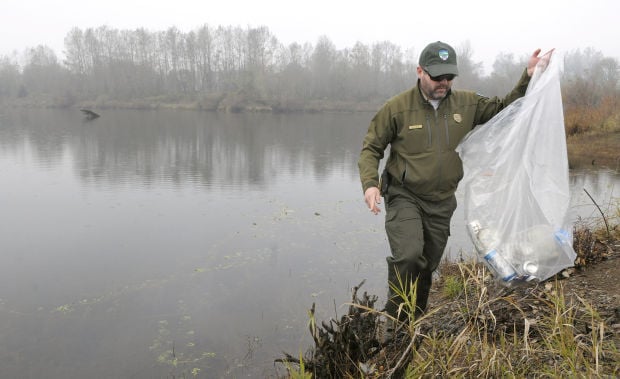 Park Ranger Scott Youngblood picks up trash on a recent visit to Bowers Rock State Park west of Albany. Problems such as litter are relatively minor there because the park isn't heavily used, Youngblood said. Neighbors worry, however, that more visitors will mean more problems. 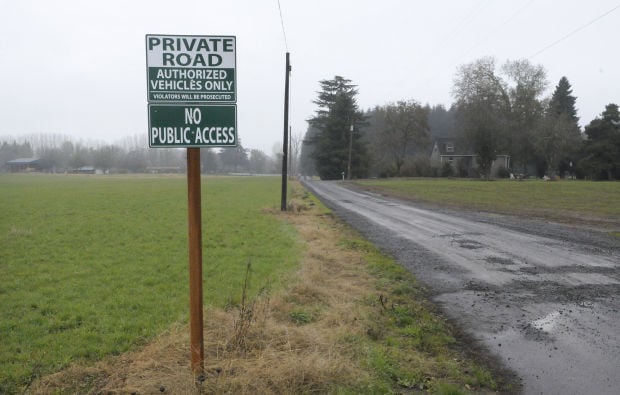 The only access to Bowers Rock State Park is on foot down a private road and by boat from the Willamette River. 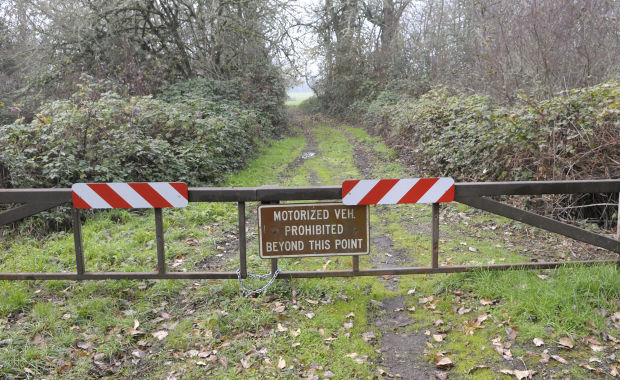 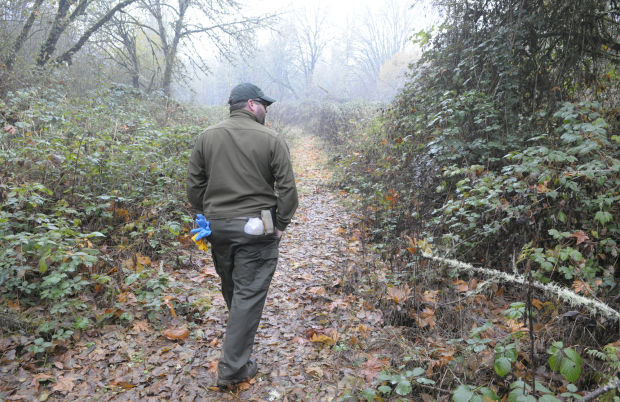 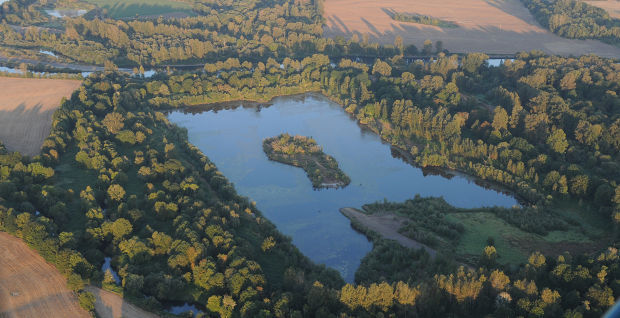 An abandoned rock quarry is the largest body of water inside Bowers Rock State Park. 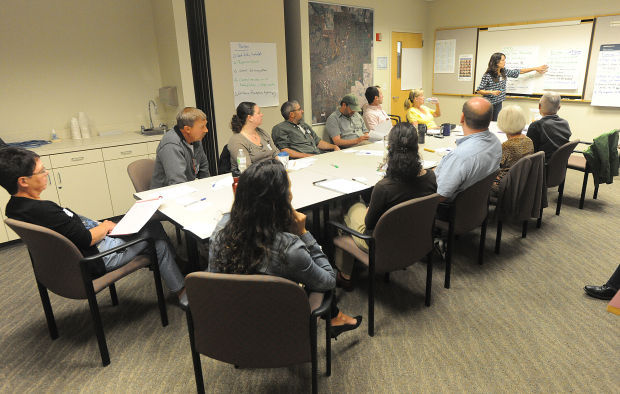 Denise Hoffert leads a discussion with neighbors and concerned parties at Albany City Hall in June of this year. 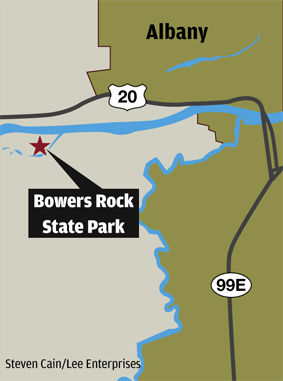 About a mile west of Albany, along the Willamette River, sits a 568-acre state park, a scenic locale with riparian forests, sloughs and side channels.

There's just one big catch: Few Linn and Benton County residents realize Bowers Rock State Park exists, in part because there isn't an easy way to get there.

The state began acquiring land for the park in 1973, but it has remained something of a hidden gem.

The Oregon Parks and Recreation Department doesn't promote the spot, as there isn't any parking, there aren't any current plans to develop a lot, and the state has an easement to get to the land through a private road, said Dennis Wiley, the agency’s Willamette District manager.

"It's not very accessible, but it's a beautiful piece of land," said Bud Baumgartner, former co-chairman of the Calapooia Watershed Council, which is planning restoration work at Bowers Rock.

Tara Davis, executive director of the watershed council, said that for the situation to change, "It's going to take a wave of interested citizens contacting the county and contacting (OPRD)."

"It's going to take a lot of voices, saying, 'We really want to use this,’" she added.

Julie Whalen, OPRD park manager, said that she already hears from locals interested in Bowers Rock, and she’s all for the public using the site.

"There are a lot of people who would really want to access the park property," Whalen said, during a June meeting about Bowers Rock.

Complicating matters, however, is that neighbors, who already complain about trespassers, vandalism and litter, are concerned with increased traffic and other problems should the park be developed.

“I’m not against development, as long as there’s a plan,” said neighbor Karen Scheler.

But she added that she’s cautious.

“Over the years, we’ve seen so much disrespect,” Scheler said.

She said she’s had to deal with drunk and high people on her family’s spread, including motorists tearing up her grass seed fields before harvest.

Kate Huber, who lives near the park entrance, said that if Bowers Rock was developed, it would need a 24-hour-a-day park ranger.

“It’s a beautiful property, and the reason why it’s beautiful is the public isn’t on it ... If it's opened up to the public, it won't be as natural,” she said.

Denise Hoffert, restoration consultant to the watershed council, said that the issues surrounding Bowers Rock weren't likely to fix themselves if left ignored.

And use will only increase as Albany's population increases, Hoffert said.

The state has an easement to access Bowers Rock State Park through a private road, Bryant Drive, which is off Bryant Way, Wiley said.

But there isn’t a parking lot at the end of the gravel road for the public to use.

"Right now, we tell people they have to walk in on that road, and then they can use the park," Wiley said.

Bryant Way doesn’t have a large shoulder to park on nearby, however.

At the end of Bryant Drive there used to be an undeveloped lot, but it was closed in the 1990s, primarily due to nighttime partying and other issues, neighbors said.

Neighbors still report people parking illegally on the side of Bryant Drive to get to the park. They said those issues have lessened due to private road signs put up about a year ago.

“The people that leave their garbage and let their dogs loose, those are the same people who don’t want to walk from the end of the road,” Huber said.

Wiley said that to develop a new parking lot, there would need to be a conditional use permit issued through Linn County, as the land is zoned exclusive farm use.

"If you look at the Linn County land goals, at this time, they don't support development at Bowers Rock State Park," he said.

But if a parking lot were to be approved by the county and constructed, Wiley said the public could use the easement to access Bowers Rock.

Huber disagreed about the public’s right to use the easement, and said the issue will likely be resolved through the courts.

There is another way to get to the park — nearly two miles of river frontage — but visitors would need a canoe, kayak or some other type of boat. And, of course, that isn't really convenient for many locals.

Still, there are some people who land at Bowers Rock via the Willamette River, and then explore the park on foot, despite the fact that it has no trails.

“This is probably one of the least developed state parks we have,” said Scott Youngblood, parks ranger, as he hiked through Bowers Rock looking for litter and vandalism.

Youngblood, who supervises numerous properties along the river between Albany and Cottage Grove, said he checks on Bowers Rock every week. He added that problems there are relatively light because Bowers Rock isn’t heavily used, despite being within walking distance to a town of 50,000 people.

Nevertheless, he filled up a garbage bag with cans, bottles and other trash left near a gravel pit and pond, where visitors come to fish.

About 100 acres of the site is in agricultural use. "That land has always been historically farmed," Wiley said.

There also is a 50-acre pond, which was constructed in 1975 by Hub City Concrete. That was purchased by Morse Bros. in 1995 and subsequently closed in 2003.

The Calapooia Watershed Council is hoping to improve the habitat for native fish in the pond by constructing a flow-through connection with the Willamette via Coon Creek.

State parks asked the council to plan and coordinate that project and other restoration work, Davis said.

Troy Brandt, of River Design Group, Inc., a consultant to the watershed council, said that 99 percent of the fish in the rectangular pond are non-native because of the water's stagnant nature.

The flow-through would make the pond more agreeable to native species, which dominate the nearby Willamette River.

The Calapooia Watershed Council, however, is waiting to see if there is likely to be state funding for such a project.

For now, it's moving forward with a more modest project that begins next spring to replant native vegetation on 15 acres of parks property. The council also hopes to work on five acres of adjacent private land.

Blackberries, reed canary grass and other invasive species have been removed from those parcels, for the most part, Davis said.

"The idea is to plant competition with those species," she added.

Some neighbors are critical of the watershed council’s plans, however, and believe that money used on restoration will be wasted.

They also worry about the watershed council advocating for more people to access Bowers Rock.

Linn County has told the state that it is interested in taking ownership of Bowers Rock, even though the situation is a “hornets nest,” said Commissioner Roger Nyquist.

“I would welcome the ownership transferring the county so we could do some sort of development that would be win-win,” he said.

He said discussions have been informal and inconsistent, and that he couldn’t see some sort of situation where there would be large scale development, with RV camping and the like.

“Personally, I view it more like Finley or Ankeny refuge, very lightly used by people who want to be out in nature,” Nyquist said.

Brian Carroll, director of Linn County Parks and Recreation, said that the county was sensitive to neighbors’ concerns.

“Whenever you’ve got a park facility that’s outside city limits, patrolling that and keeping an eye on that can be difficult,” he said.

“If you have neighbors close to the property, the potential impacts of that can be extreme,” Carroll added.

The flip side, however, is that there are nearly 600 acres of park right on the Willamette River, close to one of the larger population centers in Oregon.

“I can see why there would be a lot of residents who want to have access, but it has to be done the right way,” Carroll said.

Nyquist said there’s a better chance of solving things locally, rather than at the state level.

“There are residents. There are farmers. ... We could work with the community to address both the compatibility and the access concerns,” Nyquist said.

"We certainly have a long history of doing cooperative management agreements with local jurisdictions. It's certainly something we would be happy to discuss with the county," he added.

Wiley said that Linn County and the state have had ongoing discussions for years about the county taking ownership of Cascadia State Park, east of Sweet Home.

Sometimes the name game gets a bit confusing, and that’s certainly the case with Bowers Rock State Park.

But Dennis Wiley from the Oregon Parks and Recreation Department said that it should be called Bowers Rock — singular, not plural, and with no possessive apostrophe.

“In the early literature, I’ve seen it referred to as ‘rocks.’ At some point in time, the s got dropped,” Wiley said.

“It could possibly have been a typo,” he added.

“Oregon Geographic Names” may provide an answer as to who the park is named after, however.

The book’s entry on Bowers Slough states that two pioneer brothers with the last name Bowers lived near the waterway, about four miles west of Albany.

Brown orders 2 counties to shut back down

SWEET HOME – The organizer of Friday’s “freedom rally” in Sweet Home refused to give his name to a reporter, but he wanted to make one thing c…

For the second time in four days, a child was stuck in rapids thanks to a submerged log at McKercher Park near Crawfordsville. But once again,…

A Corvallis man was accused in Linn County Circuit Court of sex crimes that reportedly occurred nearly a decade ago.

On July 18, Kennedy Swenson did her first cannonball off the back of her family’s boat at Foster Lake in Sweet Home.

Park Ranger Scott Youngblood picks up trash on a recent visit to Bowers Rock State Park west of Albany. Problems such as litter are relatively minor there because the park isn't heavily used, Youngblood said. Neighbors worry, however, that more visitors will mean more problems.

The only access to Bowers Rock State Park is on foot down a private road and by boat from the Willamette River.

An abandoned rock quarry is the largest body of water inside Bowers Rock State Park.

Denise Hoffert leads a discussion with neighbors and concerned parties at Albany City Hall in June of this year.