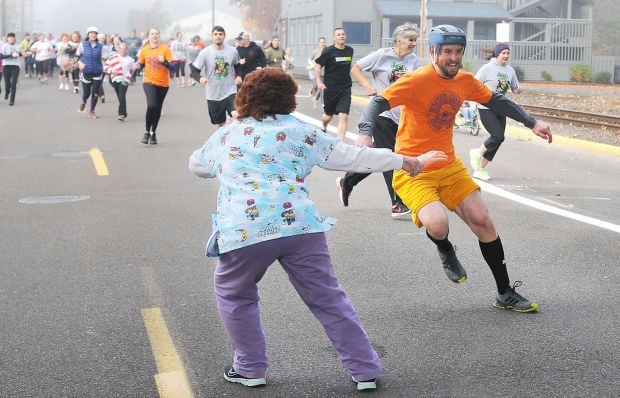 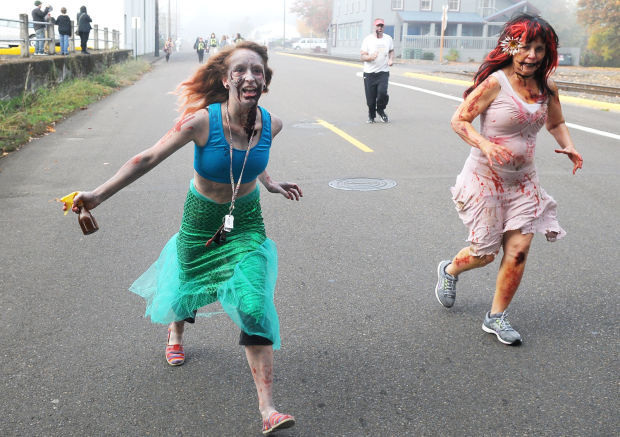 Cece Torbet and Vikki Mahaffy, both of Albany, take on the role of chasers during the event. Chasers are zombie runners with a staggered start who pursue human prey. (Jesse Skoubo/Mid-Valley Sunday) 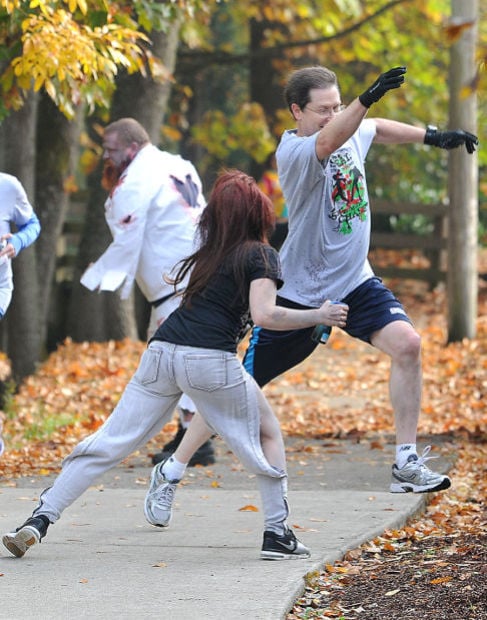 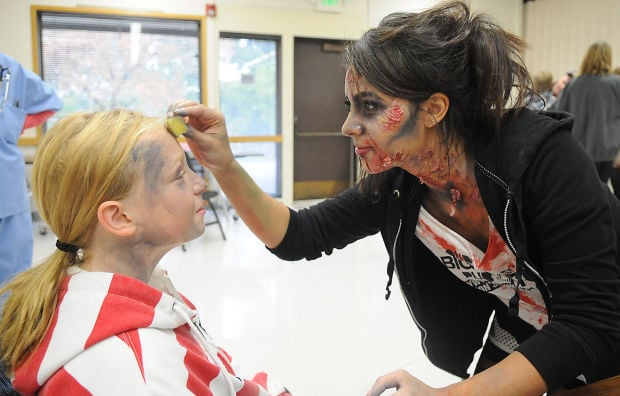 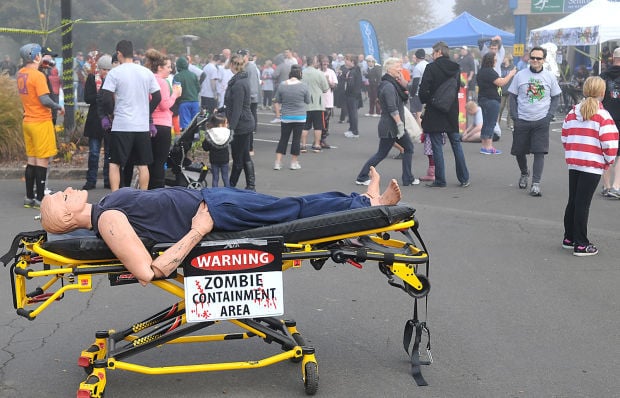 Runners gather in the "safe zone" in the Albany Senior Center parking lot before the chase. (Jesse Skoubo/Mid-Valley Sunday)

A friend did Cece Torbet’s makeup for the big event, making sure the 17-year-old’s skin was the perfect shade of deathly gray.

“I’m ready to chase after some people and eat them,” said Torbet, a participant in the second annual 5K Zombie Chase.

The horror-themed fun run, a fundraiser for Maple Lawn Preschool, was held in downtown Albany on Saturday, and about 225 people participated.

Runners paid $35 to pre-register for the event, and organizers expected to raise $3,000 this year for the preschool.

Fifty of the participants were zombies, who were either stationed at spots on the course or chasing the “live” participants.

Among the undead was Emma Zell, a 17-year-old West Albany High School senior.

“It was a cool family thing to do together,” said Zell, who had seven family members active in the fun run.

The makeup was applied by theater students from Linn-Benton Community College, who have volunteered to make the 5K Zombie Chase a reality.

“It’s called fresh scab. It’s made with corn syrup and jelly,” said Jessica Cruse as she smeared red on the face of Troy Kemper of Albany.

Kemper and his daughter Taryn, 14, were back for a second year of staggering and moaning around the Dave Clark Trail.

LBCC student Jarae Lumbert, who applied the makeup to Torbet, said she hoped to make a career out of special effects. She said movie make-up was a unique form of art that mixes two-dimensional and three-dimensional techniques, like a blend of painting and sculpture.

“Living” jogger Brandi Fifield of Albany said the makeup looked amazing, and she enjoyed the lighthearted fun of the race, including that it’s not even timed.

Debbie Wan of Corvallis said the zombies make her feel like she’s in a movie while she’s jogging.

“It’s one of our traditions now,” added Fifield, who said she and Wan do about four or five fun runs every year.

For Melissa Mitchell of Albany, who is trying to get healthier, the Zombie Chase was her first 5-kilometer run. Her husband and two children were there to support her at the starting line.

“I will be dead soon,” she said regarding her conditioning, and then laughed.

The undead milled about near the Albany Senior Center in the foggy morning, mingling with the living, and waiting for the chase to begin.

An Albany man arraigned on sex crimes Wednesday in Linn County Circuit Court was identified as a volunteer for Greater Albany Public Schools.

A 32-year-old man faces multiple charges in an incident involving injuries to a child.

Albany man gets 12.5 years in prison on sex crimes

An Albany man was sentenced to 12½ years in prison on sex crime charges on Monday in Linn County Circuit Court.

Children who haven't met the state’s vaccination requirements by next week will not be permitted to attend school.

Count NW Natural as one of the companies and organizations in favor of Oregon Democrats’ proposal to limit greenhouse gas emissions.

Two people were hospitalized after a car vs. motorcycle collision near Wren on Sunday evening.

Cece Torbet and Vikki Mahaffy, both of Albany, take on the role of chasers during the event. Chasers are zombie runners with a staggered start who pursue human prey. (Jesse Skoubo/Mid-Valley Sunday)

Runners gather in the "safe zone" in the Albany Senior Center parking lot before the chase. (Jesse Skoubo/Mid-Valley Sunday)