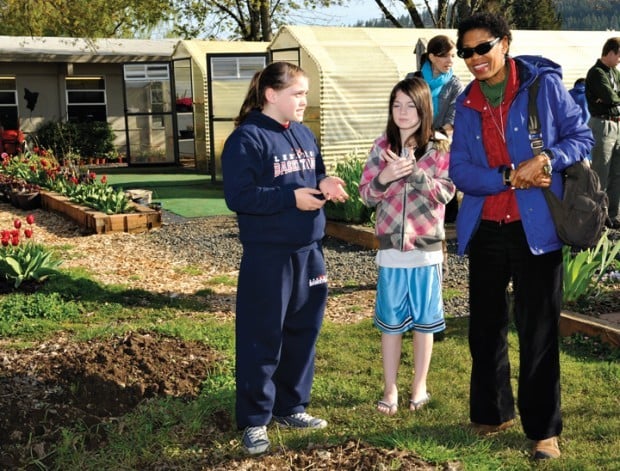 LEBANON — The “edible educational endeavor” under way at Seven Oak Middle School drew a visitor Wednesday from the United States Department of Agriculture.

Kathryn Quanbeck, program specialist with the Western Regional Office of the USDA, visited the middle school’s garden and greenhouses as part of a “farm-to-school” tour this week.

“This garden is phenomenal,” she said. “I think this is such an educational asset to have in this school.”

Now in its third spring, Seven Oak’s garden is the cornerstone of “Planting Seeds of Change,” a partnership that includes local Master Gardeners, the Lebanon Community School District and Samaritan Health Services.

The group’s mission is to promote healthy eating, garden skills and connections between communities and their food. Produce from Seven Oak’s garden is used in the school cafeteria and boosts supplies at local soup kitchens and summer food programs.

Lebanon’s program has drawn national and local attention. Several Lebanon schools have begun their own gardens, and the Sweet Home School District is working on a similar program.

On Wednesday, eighth-grader Justin Richards talked about how the fun of the garden sparked his interest in school. Sixth-grader Bryn Gerson pointed out the strawberry patch and the newly-planted lettuce, onions and peas.

“I like the feeling of being able to eat what you grow, ’cause you kinda feel proud of it,” the 11-year-old said.

Quanbeck said the USDA is gathering information on farm-to-school programs nationwide. Michelle Ratcliffe, farm-to-school manager for the Oregon Department of Agriculture, asked what could be done to strengthen Seven Oak’s program.

Barbara Rowe, the school’s garden manager, said she’d like to bring back cooking lessons to continue the emphasis on healthy eating. Master Gardener Sheryl Casteen said she wants help with lesson plans to encourage teachers to get outside.

Gardening fits with math, science, writing and even history, she noted. One of the trees slated for a planned orchard, for instance, is a Spitzenberg apple: Thomas Jefferson’s favorite.

Quanbeck agreed. “It truly is a living classroom,” she said.

Lebanon garden programs are in need of volunteers and materials, including donations of time and expertise to help extend water and electricit…