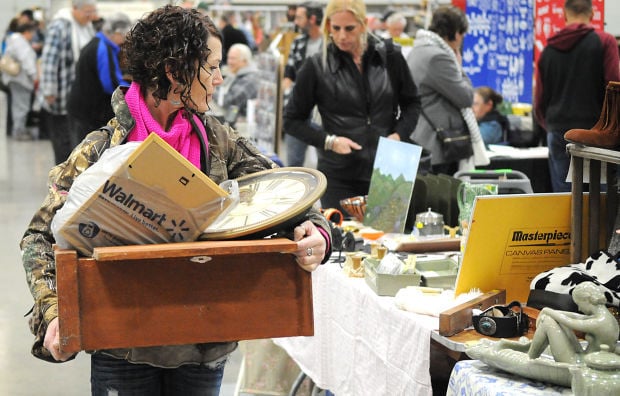 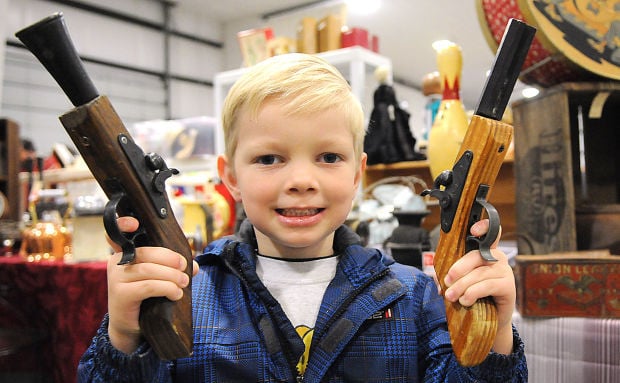 Gagge Seyler, 4, of Albany shows off his new toy blunderbuss and double barrel. 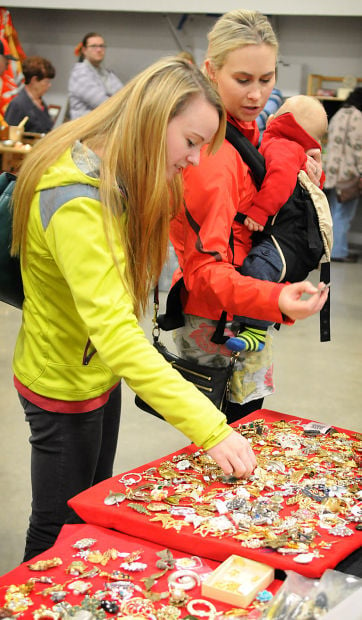 Justina Wagenaar of Silverton and Kathleen Ahle of Sublimity sift through a table of bric-a-brac. 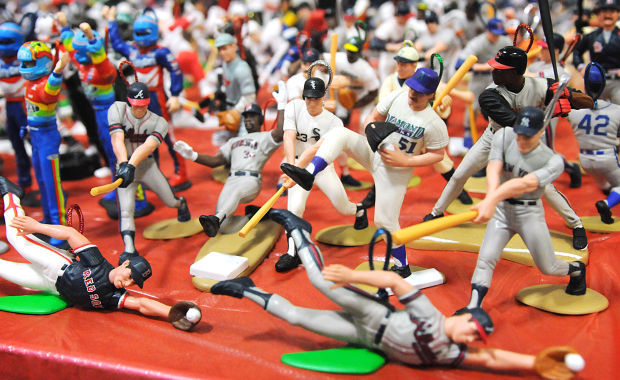 Vendors and customers alike were marveling at the size of the venue at the Linn County Flea Market Sunday morning.

Billed as the largest flea market in the county the event seemed to live up to its name, at least in the eyes of those taking part. Held at the Linn County Fair & Expo Center, and put on by Josefine Fleetwood, the flea market is an extension of her successful Salem Collectors Market.

“This is a very nice space. It’s really big here,” said Michelle Miller of Salem who made the trip to Albany for the event. “I’m a regular at these types of things.”

Sunday Miller was seeking Christmas items but she was also searching for anything that might catch her eye as a collectible. There was plenty to pick from.

Fleetwood said that the market has plenty of variety. Sunday’s show featured 115 vendors with a something for everyone.

Miller hadn’t claimed the Christmas item she was hoping to find but she had just started her search. Jana Nelson wasn’t quite as focused during her tour of the aisles.

“I’m just having fun looking. I guess I’m sort of hunting for a treasure,” she said.

Nelson made the trip up from Eugene because she had heard good things about the initial show last September, Fleetwood’s first in Linn County.

That show was on a Saturday and the feedback has Fleetwood looking forward to additional markets next year. She will be part of the Heritage Mall’s Antiques and Collectible Show on Jan. 17 and also has two shows booked for May 9 and Sept. 12 next year.

There could be more.

“I’m getting requests from vendors and visitors to add to that,” she said.

Richard Montgomery of Albany wouldn’t mind if more shows came up. He was looking to add to his various personal collections, including Old Western Americana.

“I love this stuff,” said Montgomery who brought his grandson Gagge with him. “This is reall a good one. There are more vendors. I’m glad to see it.”

Vendors seemed please as well. Ignacio Padilla was in Linn County for the first time. He normally only puts up his table in Salem.

“I really like the size,” he said. “There is lots of room for people to move around.”

Fleetwood said the flea markets normally are on Saturdays and she wasn’t sure if she would offer a Sunday market again.

“It’s been a steady stream of people coming in all morning. I’m think the number of people will rise in the afternoon,” she noted.

Several nonprofits were set up outside the main flea market area offering items as fundraisers. Fleetwood said she likes the idea of helping fundraise for local charities at each event.

Public members in attendance got into a shouting match with school officials.

A Sweet Home teenager was killed in a car crash on Highway 20 just east of Foster on Wednesday, Jan. 19, according to a news release from Oreg…

Albany nurse fined for practicing without a license

An Albany man who once was a registered nurse practiced nursing without a license in 2020 and 2021 and because of that, was denied when he tri…

Linn County District Attorney Doug Marteeny has filed a lawsuit against Gov. Kate Brown challenging her use of clemency orders to grant nearly…

A property in North Corvallis will be the site of a new jail and other justice-related facilities, Benton County leaders decided Friday, Jan. 21.

A note from the superintendent requests the maskless to refrain from engaging in mask-shaming.

Interstate 5 near Albany closed due to truck fire

Mars’ liquid water lakes might not be liquid after all

Bolivia releases condor into the wild after being rescued by veterinarians

Bolivia releases condor into the wild after being rescued by veterinarians

Gagge Seyler, 4, of Albany shows off his new toy blunderbuss and double barrel.

Justina Wagenaar of Silverton and Kathleen Ahle of Sublimity sift through a table of bric-a-brac.