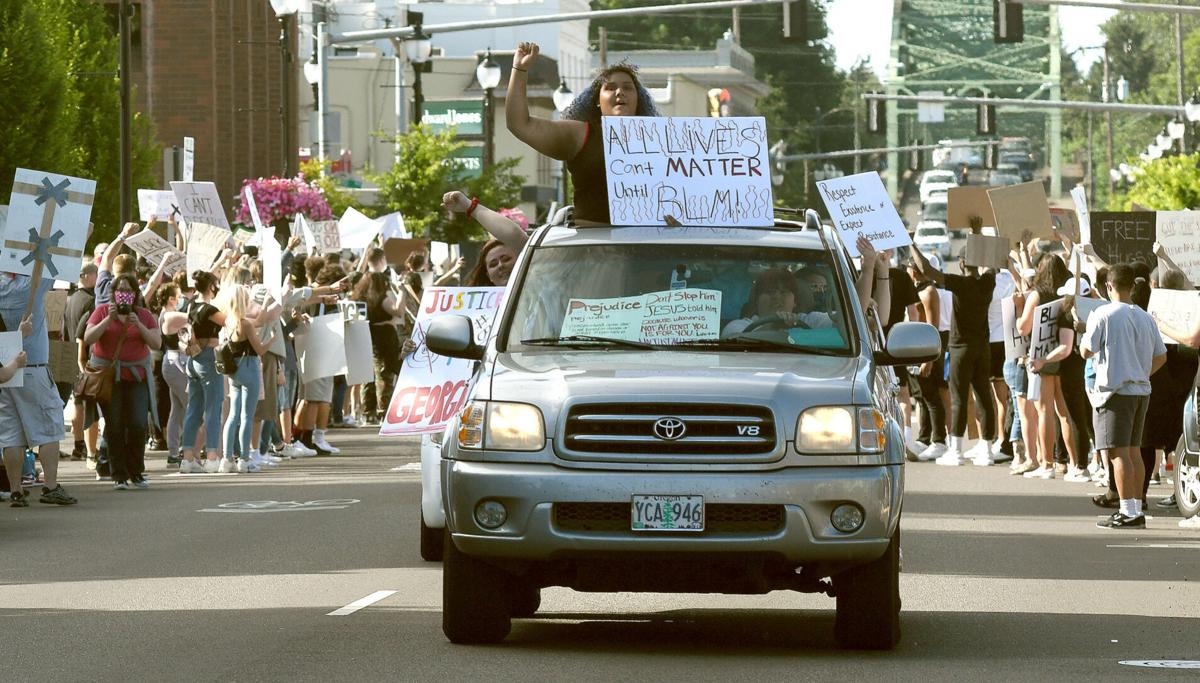 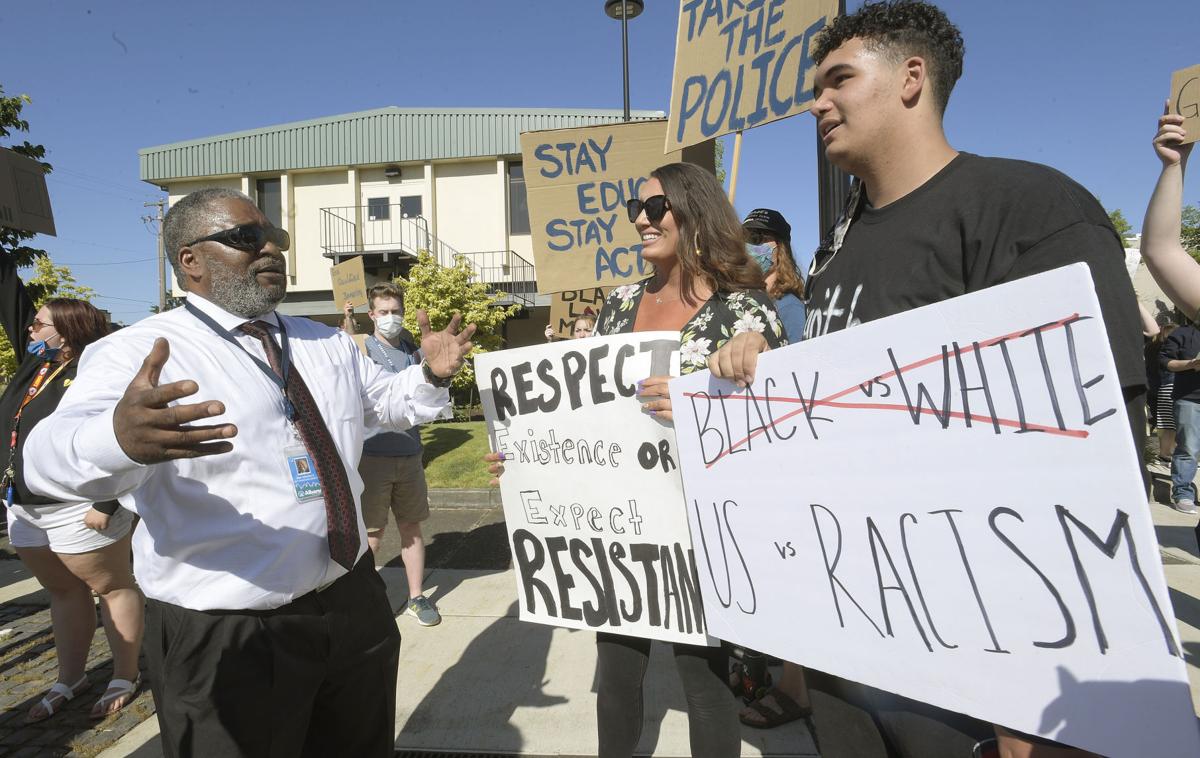 Johana Huey of Albany speaks to the crowd that before a candlelight vigil. 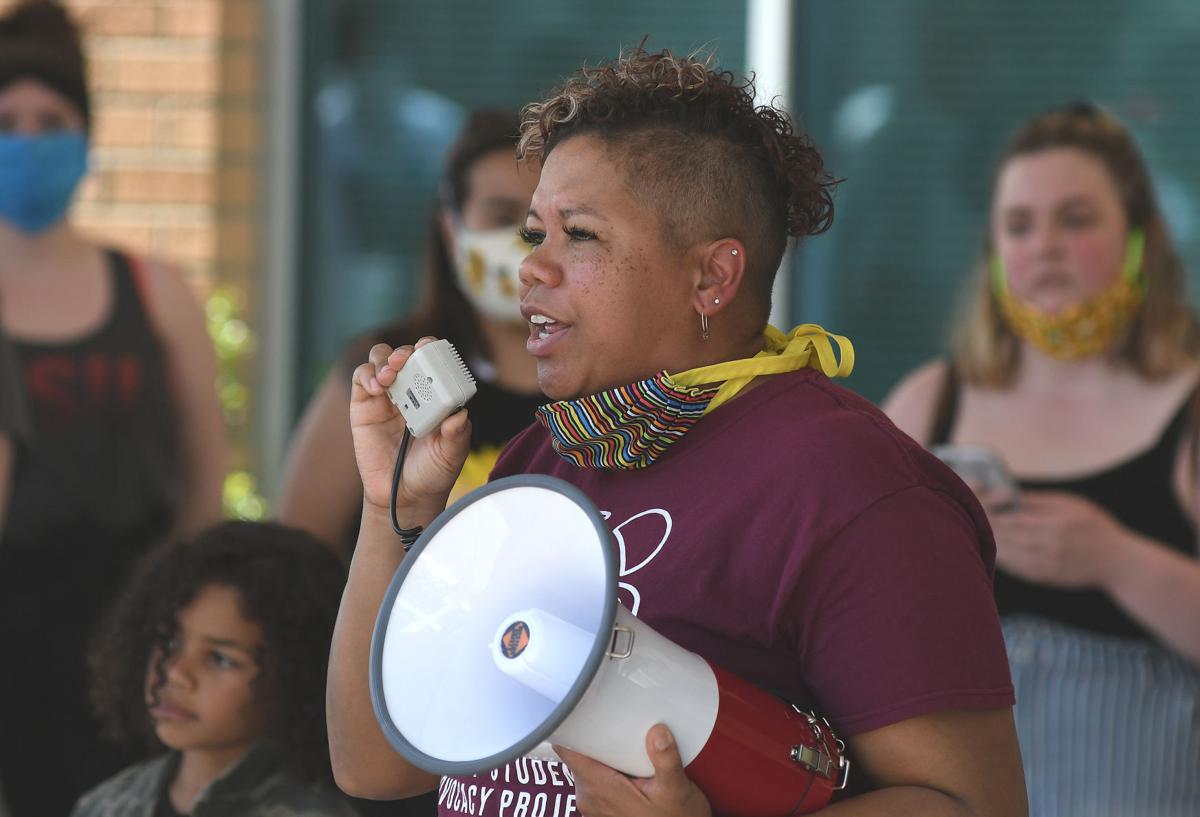 Heather Carmichael of Albany talks to the crowd assembled at Albany City Hall. 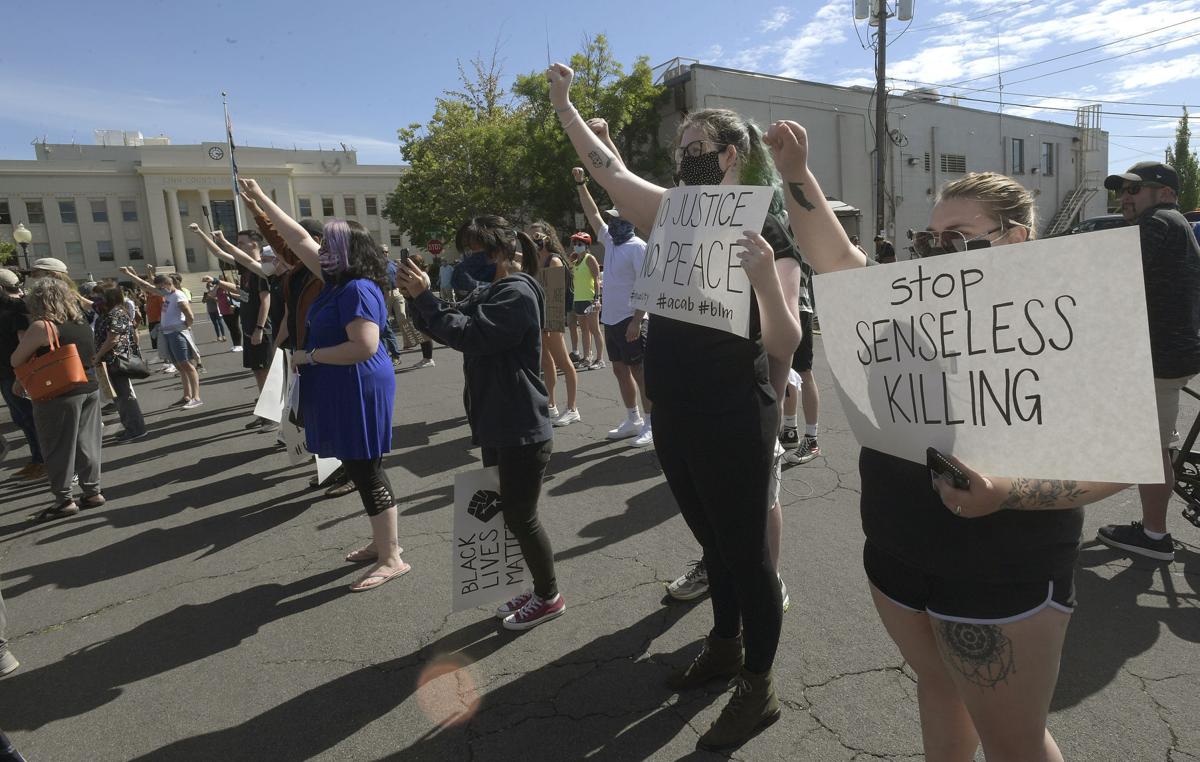 Hundreds gathered to hear speakers in front of Albany City Hall before carrying their protest to Ellsworth Street.

A peaceful rally against racial injustice in downtown Albany drew about 1,000 participants, who lined Ellsworth Street with signs and chanted. Motorists passing by honked their horns in support.

The demonstration, the largest of its kind for Hub City in recent memory, came in the wake of the death of George Floyd, a handcuffed black man who begged for air as a white police officer pressed a knee on his neck in Minneapolis, Minnesota. Video of the killing, by a bystander, sparked outrage.

“How many weren’t filmed?” read a sign held up by Charles Williams of Albany, a bus driver for Greater Albany Public Schools.

Williams said he was afraid for himself and his children in the aftermath of Floyd’s death, and that fear is something white people can’t understand.

Williams acknowledged that he was shocked to see so many people out in support of black people in Albany. “I don’t feel so alone. I just hope our voice is heard. I hope there’s reform in our police system,” he added.

Nearby, the crowd yelled, “No justice, no peace. Some protesters made an addition to the chant: “Prosecute the police.”

Anthony Sweat, 16, of Albany said it was good to see people trying to make a change for once. “They post stuff on the internet and then never do anything,” said Sweat, a junior at West Albany High School. He added that his heritage is “the best of both worlds” – black and Native American.

The event started with speakers at Albany City Hall at about 4 p.m.

“Racism is huge and a lot of people don’t realize that,” said Jadah Schmidtke, 16, a junior at South Albany High School. She recalled being called the n-word by her so-called best friend in the second grade. “We can be peaceful and love each despite the color of our skin,” Schmidtke added.

Dasaan Huey, a 2018 graduate of West Albany High School, noted how when blacks protest injustice, they’re labeled as thugs. When white people protest the right to go to the hair salon, they’re not treated the same way, he added. “Racism is all around us. It’s in the way the system works,” Huey told the crowd.

Huey’s mother, Earlean Wilson Huey, told the crowd that it was scary to be a person of color in Albany. She urged people to try and interrupt racism when they encountered the prejudice. “When you see it, speak on it, try to stop it,” she said.

She added that Floyd was simply one person in a long list of people who have lost their lives to racism, and said his death was a modern day lynching without a rope.

City Council member Alex Johnson II, Albany’s first black councilor, attended the event, and said he’s never been more proud of the town. “This is amazing to me. My heart is full,” he said. Johnson mingled with protestors along Ellsworth Street and offered encouragement. “All these kids are going to benefit from this movement. They aren’t going to be afraid to speak up anymore,” he said.

Most of those at the demonstration were white, which was similar to another peaceful protest in Corvallis on Sunday. Unlike Corvallis, where nearly all the protesters were wearing masks, only about half of the Albany demonstrators wore facial coverings.

“This was just supposed to be about 10 of us getting together,” said Ashley Balck, a history major at Oregon State University who is an AVID tutor at South Albany. “I wanted to give my students a place where they could share their voice about the injustice happening,” she added.

At the end of the rally, demonstrators kneeled for about nine minutes – the amount of time that a police officer put his knee into Floyd’s neck.

At about 6:30 p.m., Heather Carmichael of Albany urged the crowd to go home before dark. “We don’t want this to be another thing in the news where our city got destroyed because we tried to do something good,” added Carmichael, who is black.

Carmichael helped organize the event as the steering committee chairwoman for the Albany Student Advocacy Project, a group that advocates for equity, diversity and inclusion for all GAPS students. She’s also the worship pastor at the Grove, an Albany church.

Near the start of the event, Carmichael told the crowd that the rally had the support of local law enforcement, and urged demonstrators not to react to those who would seek to undermine them.

Albany Police Department officers and Linn County Sheriff’s Office deputies had a visible presence, but they were not clad in riot gear. There apparently were no major issues and Capt. Brad Liles of APD said he believed there were no citations nor arrests regarding the demonstration.

Some Albany stores reportedly closed their doors due to concerns with the protest turning violent. Comments on a local social media site included misinformation about the event.

A8: Cities gird for more violence

Gallery: At both the DH and GT websites

Editorial: Roses and Raspberries (May 31)

It's been weeks of unrest.

Tuesday’s peaceful protest against racial injustice attracted about 1,000 people to downtown Albany for an emotional and extraordinary event.

As I See It: The time for change has come

When the unanimous vote came in from the Corvallis City Council to allocate up to $150,000 to fund a bias response initiative that prevents an…

Johana Huey of Albany speaks to the crowd that before a candlelight vigil.

Heather Carmichael of Albany talks to the crowd assembled at Albany City Hall.

Hundreds gathered to hear speakers in front of Albany City Hall before carrying their protest to Ellsworth Street.