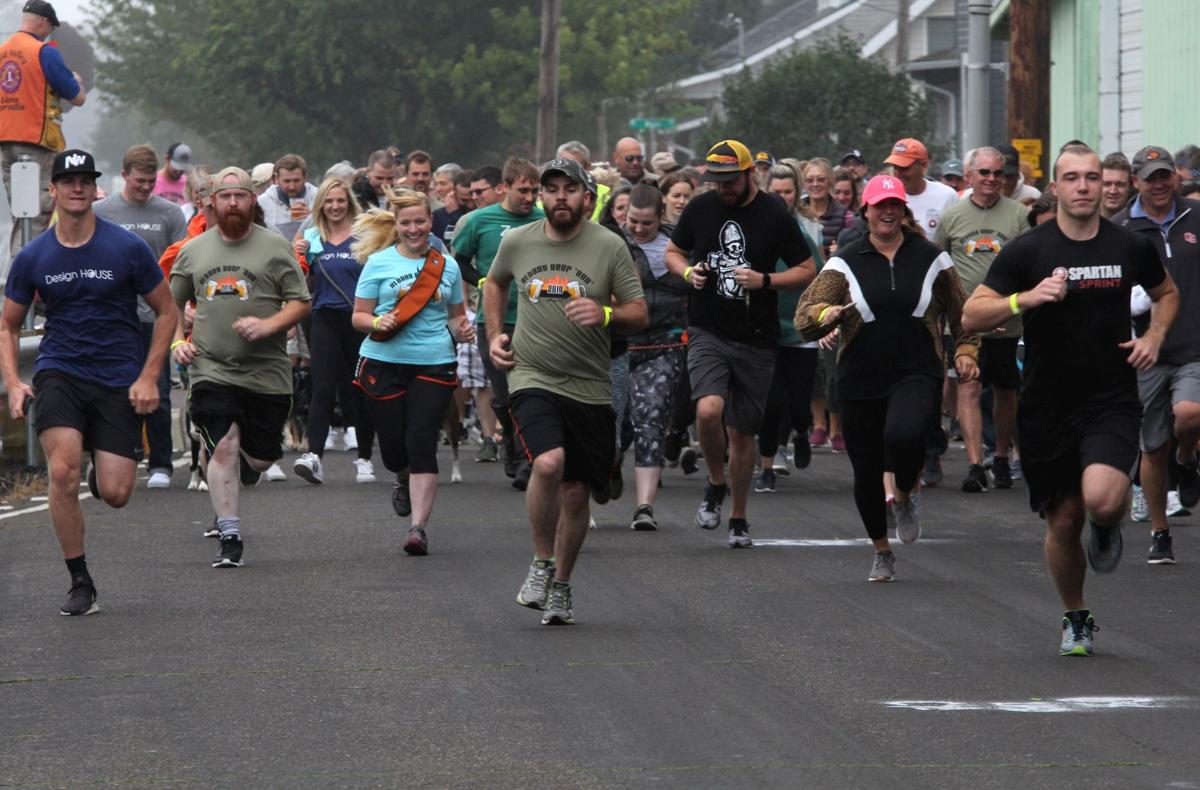 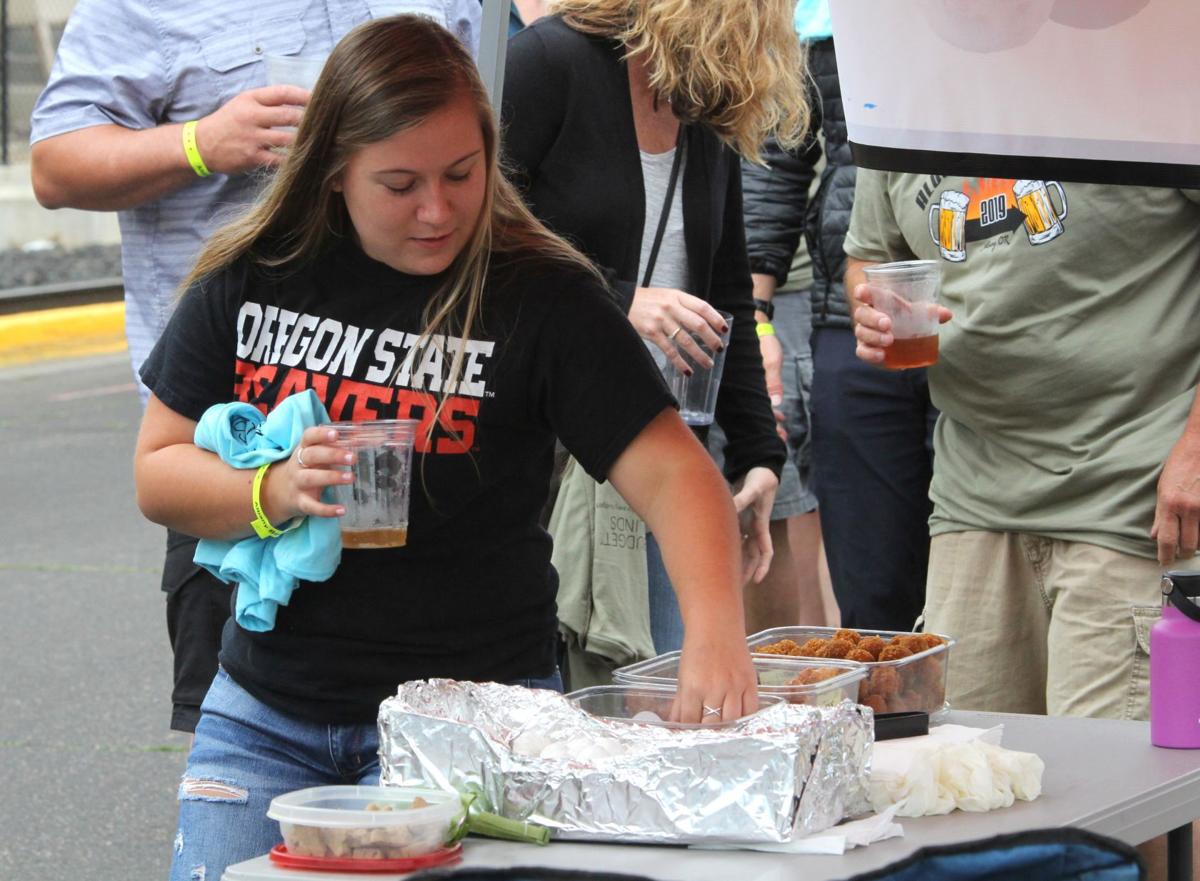 A participant in the Albany Beer Run picks up a donut at the race's midpoint ... with only about 160 yards to go! 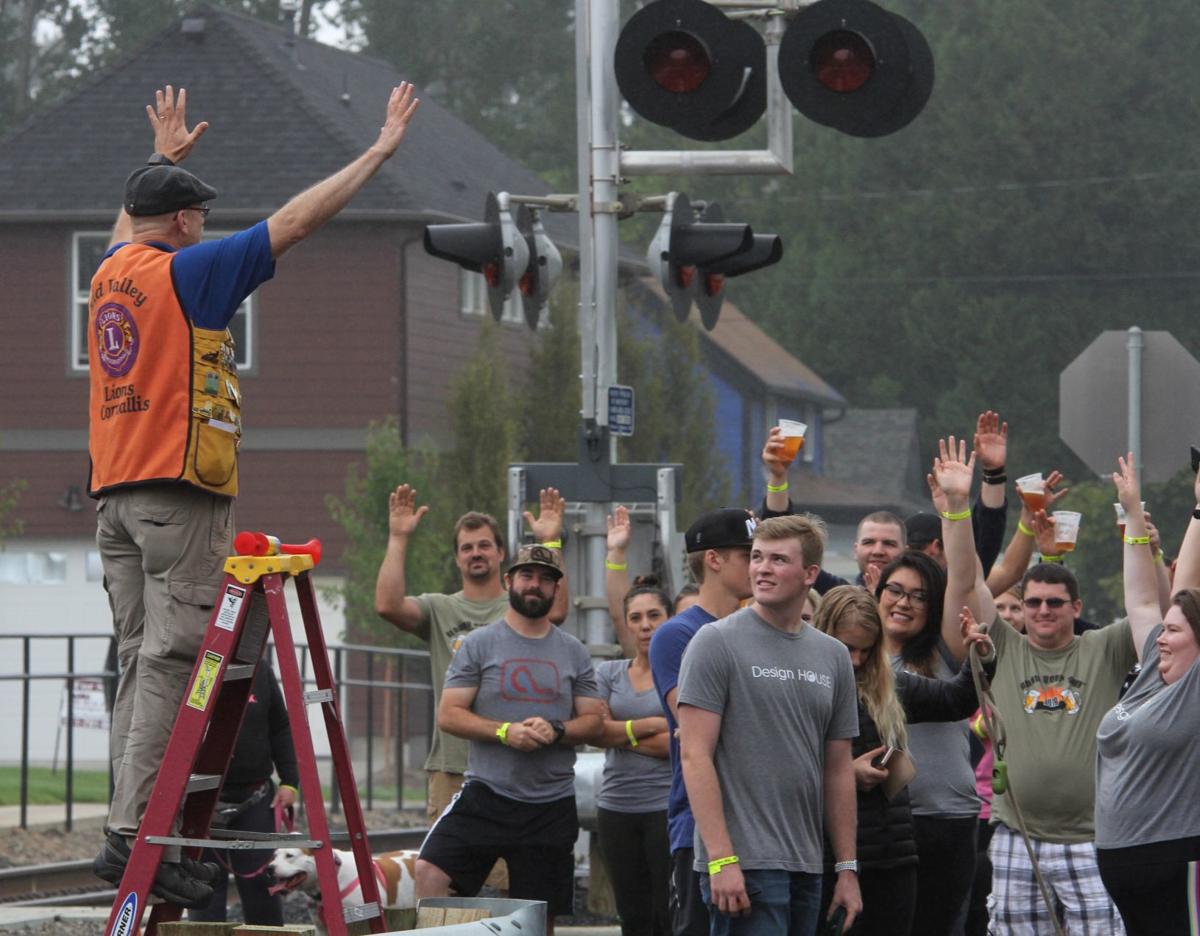 Skip Volkmann, a Corvallis Lions member, rallies the Albany Beer Run participants from a ladder before the start of Saturday's '"race."

Near Sweet Home on Saturday hundreds of athletes pushed themselves to the limits of human endurance in a grueling triathlon involving long distance swimming, running and biking.

This was not that race.

The Albany Beer Run’s course was a mere 0.3 kilometers (328 yards), stretching just a couple blocks from Calapooia Brewing to Deluxe Brewing. Many of the roughly 200 participants. each of whom received two tickets for beer with their registration fee, walked the course with a beer in hand and stopped at the midpoint spot  for a donut at the "aid station."

But race director Jim Abbott said the event is not really meant to compete with other races — instead it’s a way to raise a little bit of money for a good cause. This year the event raised about $1,000 for Senior Dog Rescue of Oregon, he said.

Abbott, who also directs the Thanksgiving Day Gobbler's Revenge race, said the Corvallis Lions Club started the event last year. He said since the group already has experience running the Gobbler’s Revenge, it was relatively simple to develop the beer run.

He said he came up with the idea after hearing about a half kilometer race in Texas. When he realized that the two breweries in Albany were an even shorter distance from each other, a beer run seemed like a perfect idea.

He said the race, which began bright and early at noon, was also meant to be dog-friendly since the proceeds benefit charities that help dogs.

Abbott said the plan is to continue to hold the race early in September each year.

“People seem to enjoy it. It’s a party," he saids.

Becky Griffis, Aria Miles and Cindy Kummer, who work together at Reed Veterinary Hospital in Albany, attended the event together.

Miles, of Corvallis, said they came because in their work they encounter senior dogs that need help.

Griffis, of Albany, said senior dogs are sweet and often already trained, but they sometimes are overlooked by people adopting animals.

“They sit in shelters for a long time,” she said.

Kummer, of Albany, said the event was also more relaxed than other runs she’s done.

“Shorts and flip flops are not the usual,” she said.

Miles said she would do the run again.

Weekend one of a re-opened Corvallis was far from problem free.

A participant in the Albany Beer Run picks up a donut at the race's midpoint ... with only about 160 yards to go!

Skip Volkmann, a Corvallis Lions member, rallies the Albany Beer Run participants from a ladder before the start of Saturday's '"race."