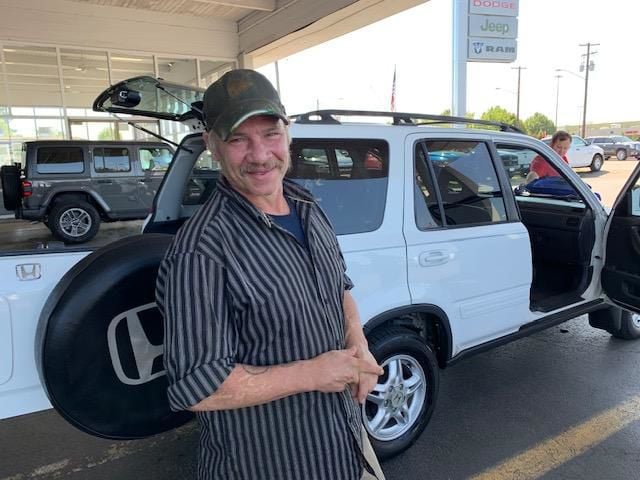 Army veteran Brian Carter, who lives outside Lebanon, was given a car by an Albany auto dealership on Wednesday. He said he's most looking forward to taking his four children to the coast. 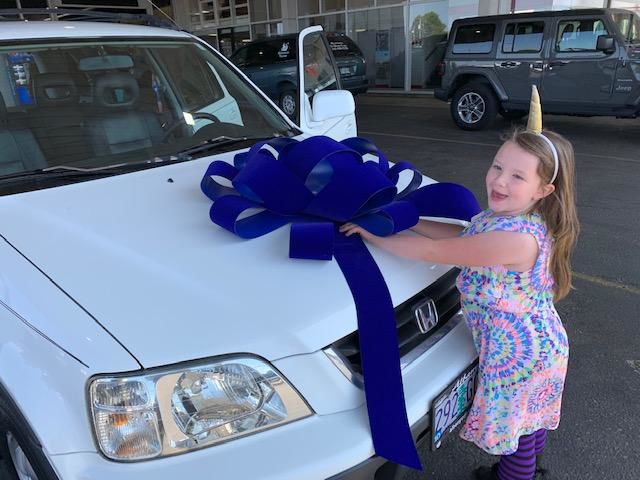 The Carter children, including Joni Carter, 7, explored the interior of their new car and were impressed. The kids also loved the big blue bow on top of the rig.

Brian Carter, a single father of four children, had been without an automobile for nearly a year.

And living in the countryside near Waterloo made that even more problematic.

“Just getting a gallon of milk was an ordeal,” said Carter, an Army veteran on disability. He’d have to wrangle a ride, as well as a babysitter, simply to make a quick run to a supermarket or convenience store.

Taking the kids to a park on a summer day would require plenty of planning.

On Wednesday morning, Carter thought he and his family were being taken to an appointment at Vets Helping Vets HQ in Albany. Instead, a volunteer with the organization drove them to Albany Chrysler Dodge Jeep Ram Hyundai on the Santiam Highway.

The auto dealership handed Carter the keys to a 2000 Honda CR-V — a donation that would be worth roughly $4,000.

“This is awesome. I’m speechless,” Carter said. “I can get a lot of stuff done that I need to get done for the kids.”

The donation from the auto dealership initially was sparked by the Lebanon Community Schools. The Carter children attend Hamilton Creek School and are doing well, despite the difficulties their family faces, said Julie Miller, community liaison at the Welcome Center for the district.

The Lebanon Community Schools contacted Vets Helping Vets HQ to try to get assistance for the Carters, and the organization looked into the veteran’s background.

“This is a man who is doing all the right things,” said Derral Hunt, Vets Helping Vets HQ president and veterans advocate.

So Hunt reached out to Jacob Zilverberg, general manager for Albany Chrysler Dodge Jeep Ram Hyundai on the Santiam Highway. Hunt had recently purchased a vehicle from the dealership, and he also helped land a veteran a job with the company.

Zilverberg, whose father was a Marine, said he was eager to help. And the right car came within two weeks of Hunt’s request.

“We love doing this type of stuff. We want to continue to help in the community,” Zilverberg said.

Carter is most looking forward to taking his children to the ocean with his new SUV. The kids love the coast.

“I’ll watch them go run on the beach and it will be perpetual smiles,” he added.

Jacob Zilverberg's last name was spelled incorrectly in the article. The story has been corrected.

For about three years, the mid-Willamette Valley has been without a Hyundai dealership, so residents who owned that company’s automobiles woul…

When Kristopher Jerome started trying to get his first fantasy novel in stores, people didn’t take him seriously because “Wrath of the Fallen”…

Tourism accounted for $12.3 billion in spending in Oregon in 2018, according to a state report, and outdoor recreation — including camping, pe…

The Corvallis to the Sea Trail will almost certainly be considered the crown jewel of mid-Willamette Valley's hiking routes one day.

Army veteran Brian Carter, who lives outside Lebanon, was given a car by an Albany auto dealership on Wednesday. He said he's most looking forward to taking his four children to the coast.

The Carter children, including Joni Carter, 7, explored the interior of their new car and were impressed. The kids also loved the big blue bow on top of the rig.