US sees first case of omicron variant detected in California

An overview of the waterfront project, including cost breakdowns for certain elements. 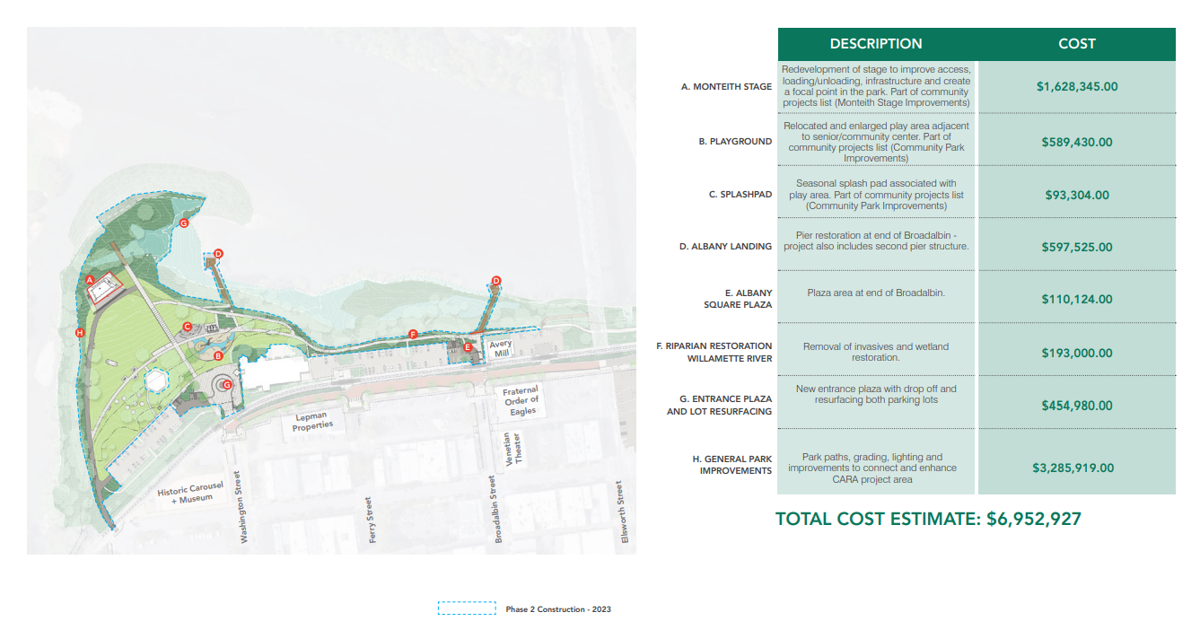 A breakdown of the improvement plan for Monteith Riverpark as part of the waterfront redevelopment plan. 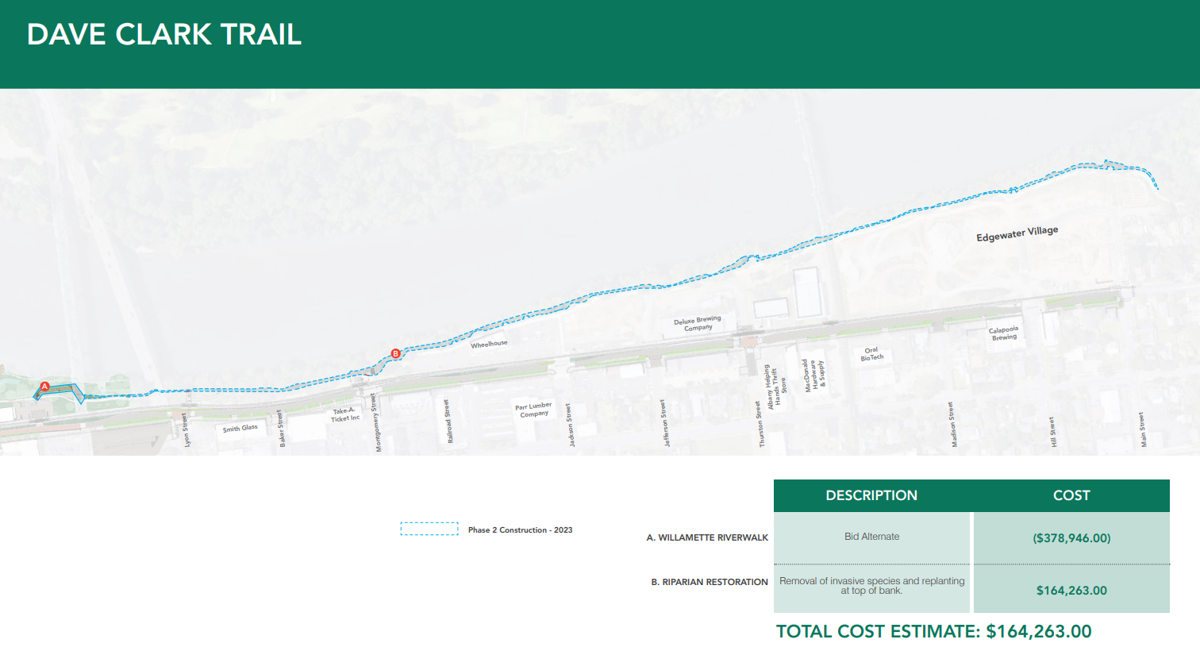 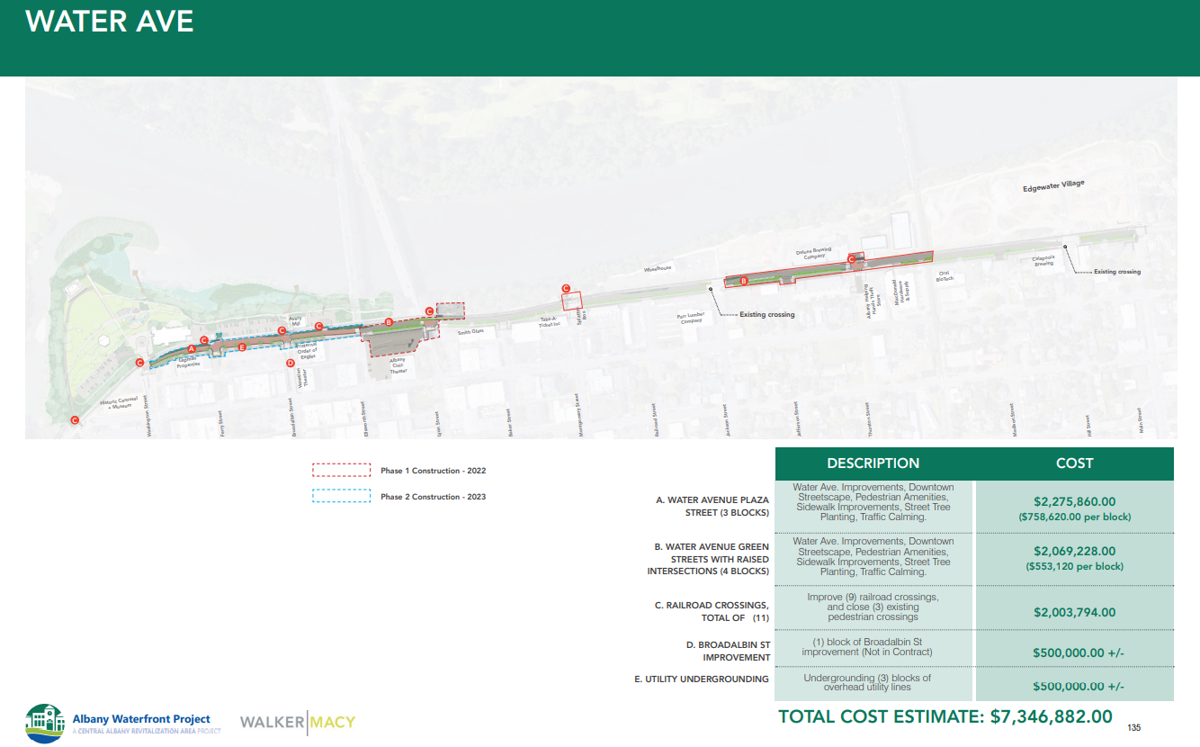 Improvements planned for Water Avenue as part of the waterfront redevelopment.

The city of Albany is going to borrow most of the remaining funds in a special taxing district to create a new waterfront experience along the Willamette River near downtown.

City officials, acting in their roles as the Albany Revitalization Agency, directed staff on Wednesday, Nov. 17, to pursue financing for a $15 million waterfront redevelopment project. Nearly $5 million in additional projects could be considered at a later time if funding is available.

The project aims to better connect downtown with the waterfront. Using Central Albany Revitalization Area — the renewal district itself — funds, the city will improve a stretch of downtown running along Water Avenue from Monteith Riverpark to Main Street. The project area includes up to 24 acres of park space and 14 blocks of streetscape.

Albany’s waterfront is divided from downtown by parking lots, railroad tracks, missing sidewalks, crossings, and Water Avenue. Thick foliage and limited access further obscure it from downtown visitors. In recent years, the city has been preserving waterfront properties for public use and planning improvements to Water Avenue and parks.

Architecture firm Walker Macy designed the waterfront redevelopment with such features as a new stage/event space in Monteith Riverpark, a new playground, splash pad and renovated piers, as well as a more pedestrian-friendly Water Avenue. The Dave Clark Trail will also be redone with improved views of the river.

Although a significant amount of money has been saved and directed to the waterfront project, the $4.84 million set aside is insufficient to complete it during the next two years, a city memo from Economic Development Manager Seth Sherry prepared for the ARA’s Wednesday meeting says.

Citing rising costs of borrowing and building, Sherry wrote that borrowing the balance of funds needed for the project is prudent.

Albany officials say it is one of the last major cities on the Willamette to invest in its waterfront. The CARA advisory board, which makes recommendations to the similarly sounding ARA board, approved the waterfront project in November 2020, anticipating that its tax increment financing district, established in 2001, would sunset in 2025.

As two sides of the same coin, the CARA advisory board typically meets with the ARA. The Wednesday meeting included objections regarding the lack of presence from CARA advisory board members, as its meeting was not scheduled with the ARA’s. A motion was raised and seconded to table discussion until both groups meet, but no vote was held.

Two-phase construction could begin in spring or summer 2022. Sherry said design and engineering for the project are 90% complete. Bidding documents are presently in the works. ARA voted 5-2 to move forward with the project, with members Dick Olsen and Matilda Novak opposing because the CARA board was not present.

Why Corvallis' tree canopy is looking a little fresher

You might say it got a little sprucing. Find out where the right trees went in the right spot.

An elderly female bicyclist was killed in a traffic crash west of Philomath on Highway 34 Sunday morning, according to the Benton County Sheri…

An overview of the waterfront project, including cost breakdowns for certain elements.

An overview of the phased construction plan for the waterfront project.

A breakdown of the improvement plan for Monteith Riverpark as part of the waterfront redevelopment plan.

Improvements planned for Water Avenue as part of the waterfront redevelopment.