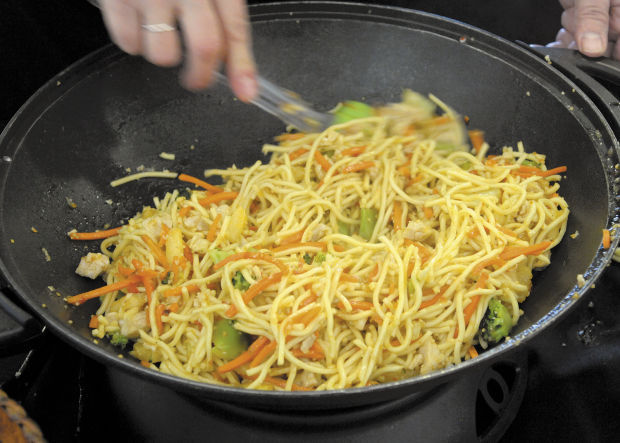 The Albany district had students taste-test this stir-fry dish, “Dragon Chicken Chopsticks,” to see whether it should be added to the lunch menu. (David Patton/Democrat-Herald) 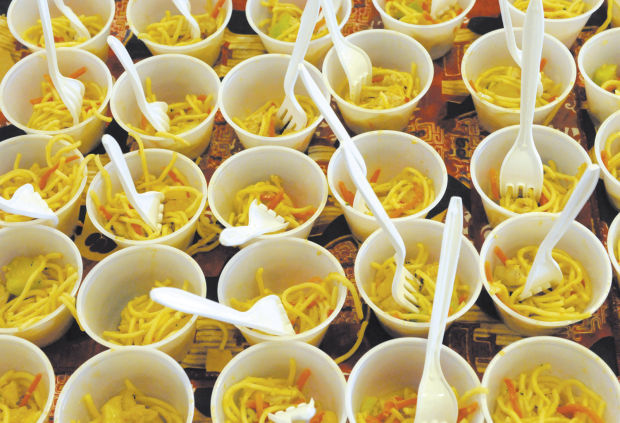 Curious students lined up outside the cafeteria Nov. 20 at Timber Ridge School, following the scents of garlic and sweet chili sauce.

There, they found Sodexo Executive Chef Delores Tesky, who’s based in Salem, stirring up a wok filled with yakisoba noodles with chunks of chicken, broccoli, carrots and pineapple. Children took turns accepting samples of the concoction, dubbed “Dragon Chicken Chopsticks,” in keeping with the “Chopsticks” term for the line of Chinese foods Sodexo provides.

“If the kids like it, then Polly in the kitchen will make it,” explained Rachel Pulsipher, food service manager for Greater Albany Public Schools.

That interest is the key to a solid bottom line for Albany’s meal program, which has been in the red for three out of the last four years.

Albany contracts with Sodexo for food service. Members of the district’s school board heard a report Nov. 18 on the program’s financial status so far for the school year.

The program got off to a slow start this summer, with participation in the summer meal programs dropping in both July and August.

“If they can keep that up, we’re actually on track to have a pretty darned productive year,” said Russell Allen, the school district’s director of business.

School food service programs statewide suffered dual blows in the past few years, one caused by the recession, the other by new federal mandates redefining what, how much, and how often particular kinds of foods can be served.

A year into the requirements of the Healthy, Hunger Free Kids Act, school meal programs now have a better idea of how the nutritional guidelines are shaking out. In Albany’s case, Allen said, kitchen crews are now better able to form menu plans that will appeal to their young customers. The Dragon Chicken experiment is a part of that plan.

At Timber Ridge, Pulsipher said all of the students she spoke with loved the new dish. The plan is to get it on the menu Dec. 3, in hopes that some of the young taste-testers will ask to buy a school lunch that day.

Tesky, the chef, said she was pretty sure the meal would get a thumbs-up based on responses from sample day.

“The kids are coming back trying to get more,” she said, “so that’s always a good sign.”

Jennifer Moody is the education reporter for the Democrat-Herald. She can be reached at 541-812-6113 or jennifer.moody@lee.net.

SCIO — Gone are the days when school cafeterias made rice with three pounds of butter and put a cookie on each tray.

The Albany district had students taste-test this stir-fry dish, “Dragon Chicken Chopsticks,” to see whether it should be added to the lunch menu. (David Patton/Democrat-Herald)