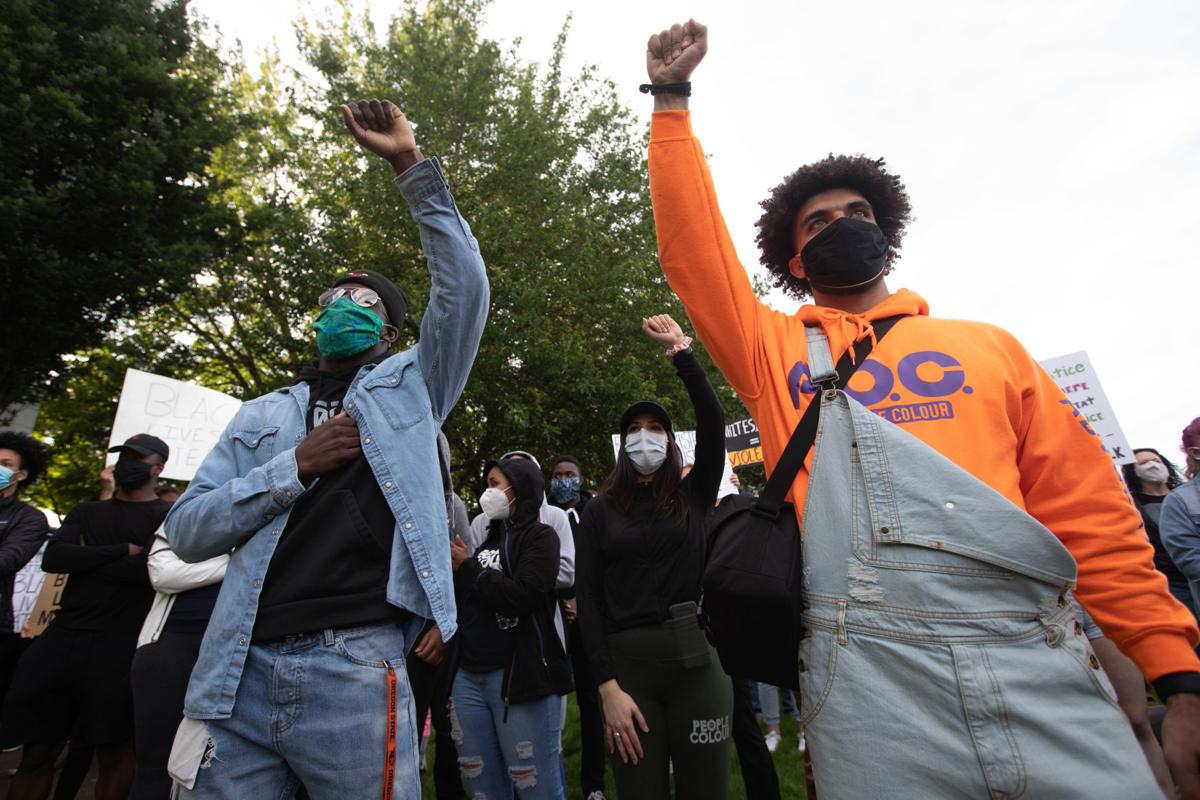 From left: Joel Walker, Natasha Malik and Adam Rateb hold up their fists while chanting along with the crowd during a rally for racial justice on Sunday night at the Benton County Courthouse. 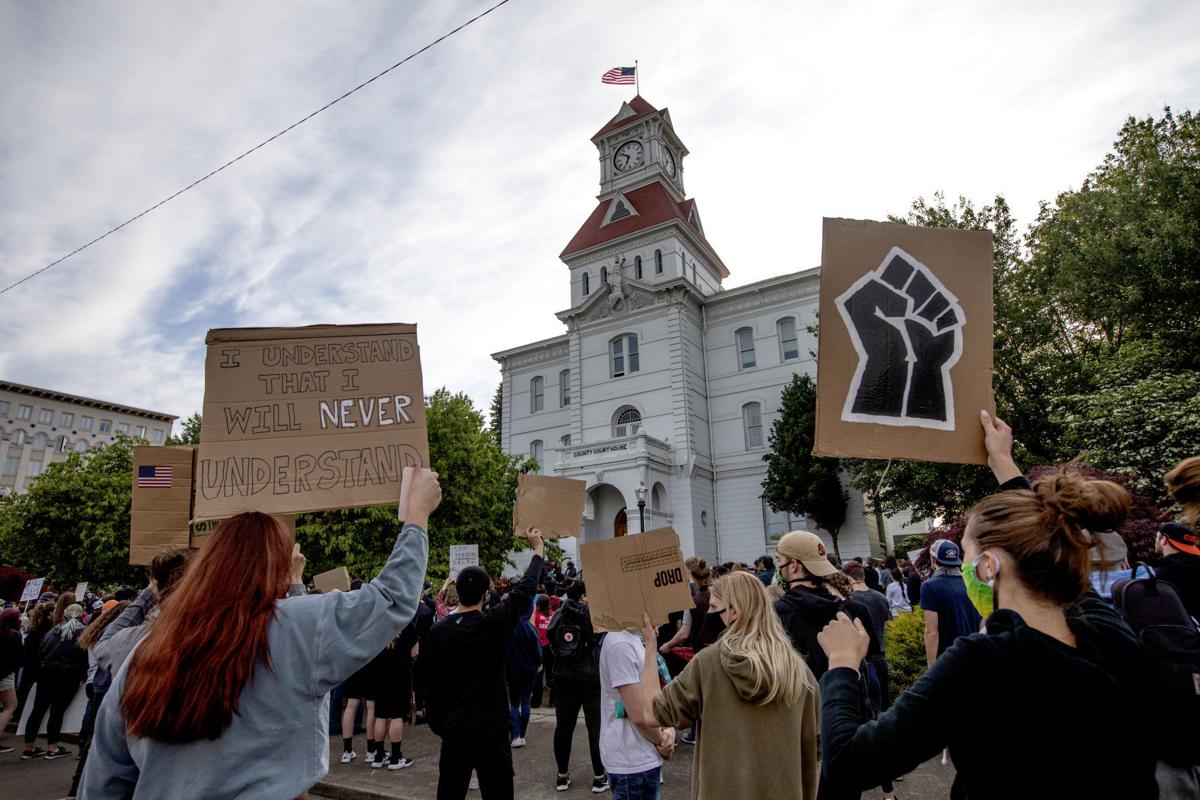 Demonstrators hold up signs while standing in the street during a rally for justice for black people on Sunday at the Benton County Courthouse.

About 2,000 people gathered outside the Benton County Courthouse in Corvallis on Sunday night, holding signs and chanting “Black Lives Matter” and “No justice, no peace.”

The peaceful demonstration for justice for black Americans came in the wake of the death of George Floyd, a handcuffed black man who begged for air as a white police officer pressed a knee on his neck in Minneapolis, Minnesota.

Eli Henderson of Corvallis held up a sign for passing motorists on Fourth Street in Corvallis: “Living while black should not be a death sentence.”

“We go through everyday life worried that we might end up like George Floyd,” said Henderson, a lab assistant at Oregon State University. “We’re still facing that fear every day,” he added.

Henderson was impressed by the turnout. “It says that a lot of people are willing to go out of their way to recognize the injustice that’s been going on for a long time. It’s good to see so many people active about it,” he said.

Chelle Palkki of Corvallis said that Floyd’s death and the killings of other black men makes her scared for her four grown sons. “I just worry every single day that one time, it’s going to be one of them,” she said.

When they were young, she gave them “the talk” – essentially, how to survive an encounter with a law enforcement officer. “Don’t be loud, keep your hands visible at all times,” Palkki explained.

Yalda Asmatey of Corvallis, who is of Afghan descent, said there are incidents of racism in Corvallis, including against one of her daughters.

“We’re looking across the country and people are fed up with the degree of systematic racism that’s existed in this country since day one,” Asmatey said. “I’m here because I have young children. I want to see a different country,” Asmatey later added.

Joel Walker, an OSU student and Beaver soccer player, was one of the speakers at the event. The business marketing and management major noted how churches and others expressed sympathy for people experiencing anxiety when they were “boxed-in” by stay at home orders. “What if I told you that black people in America have been boxed in their whole lives?” Walker said.

In an interview, Walker said that more people are just now seeing despicable acts of racism because of cellular phones and social media, and how these modern technologies can quickly spread news.

The majority of the crowd was white, and speakers thanked them for their support, but urged them to remember that the movement for racial justice wasn’t just a one-day protest. Ongoing vigilance would be needed every day, speakers said.

Mali Gottfried of Corvallis, a junior at Corvallis High School who is Indian American, told the crowd that black people bear the brunt of racism. People of color who aren’t black also need to stand up for their black neighbors, she added. “Use your voice. Use your privilege if you’re not black,” Gottfried said, in an interview. Even at CHS, she hears slurs and jokes about segregation, she said.

Attendees spilled off the courthouse lawn and the sidewalk onto a lane of Fourth Street, but motorists weren’t impeded by the blockage, as they were able to use the other two lanes. A few dozen people joined the demonstration from the Fourth Street sidewalk across the roadway from the historic structure. Nearly all of those at the event were wearing facial coverings.

There were no apparent arrests and no apparent police presence at the Corvallis demonstration, which dispersed at about 8 p.m.

Benton County District Attorney John Haroldson, who was not present at the demonstration, expressed support for free speech and hoped everyone would be safe. “Clearly this is an important issue and people have a need to be heard,” he said.

Mali Gottfried is Indian American. Her racial background was incorrectly identified in the initial online version of this story. The error was corrected in less than 30 minutes.

Editorial: Roses and Raspberries (May 31)

Jason Dorsette has filled a series of roles at Oregon State University in his six-plus years on campus.

Editorial: There's still much to overcome in the mid-valley

Martin Luther King Jr. Day was celebrated on Monday, with local observances including a march in Corvallis at Oregon State University that dre…

Pushing back against 'crisis of empathy'

Sometimes our allies can be even more exasperating than our enemies — but we still have to find ways to work together for the greater good.

It could have been a scene from a 1960s civil rights demonstration: nearly 200 people marching across the Oregon State University campus carry…

Trimming overgrown plants along trails. Raking up leaves and other plant debris. Hauling wheelbarrow loads of gravel to spread out on trails.

A peaceful rally against racial injustice in downtown Albany drew about 1,000 participants, who lined Ellsworth Street with signs and chanted.…

It's been weeks of unrest.

Tuesday’s peaceful protest against racial injustice attracted about 1,000 people to downtown Albany for an emotional and extraordinary event.

As I See It: The time for change has come

When the unanimous vote came in from the Corvallis City Council to allocate up to $150,000 to fund a bias response initiative that prevents an…

Corvallis resident addresses rotary club on history of racism, how to be better allies

Although Oregon has a reputation for being a more liberal state, one Corvallis native said Oregonians still have much to learn and a lot to be reminded of when it comes to the racial history of the U.S.

Black Lives Matter protesters marched peacefully but purposefully through the streets of Corvallis for a full hour Monday night, calling for a…

People in Albany, LaVette Ervin heard, were nice. There's no racism here, they told her.

From left: Joel Walker, Natasha Malik and Adam Rateb hold up their fists while chanting along with the crowd during a rally for racial justice on Sunday night at the Benton County Courthouse.

Demonstrators hold up signs while standing in the street during a rally for justice for black people on Sunday at the Benton County Courthouse.