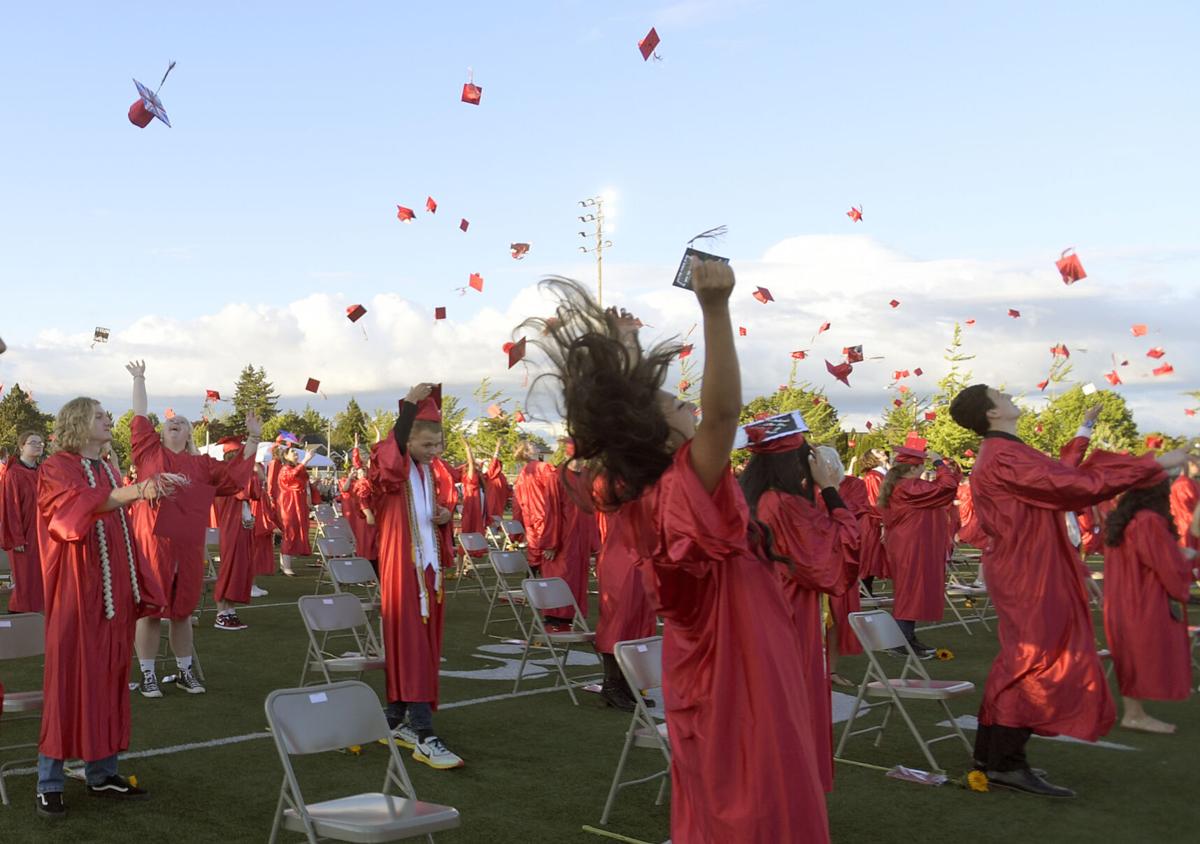 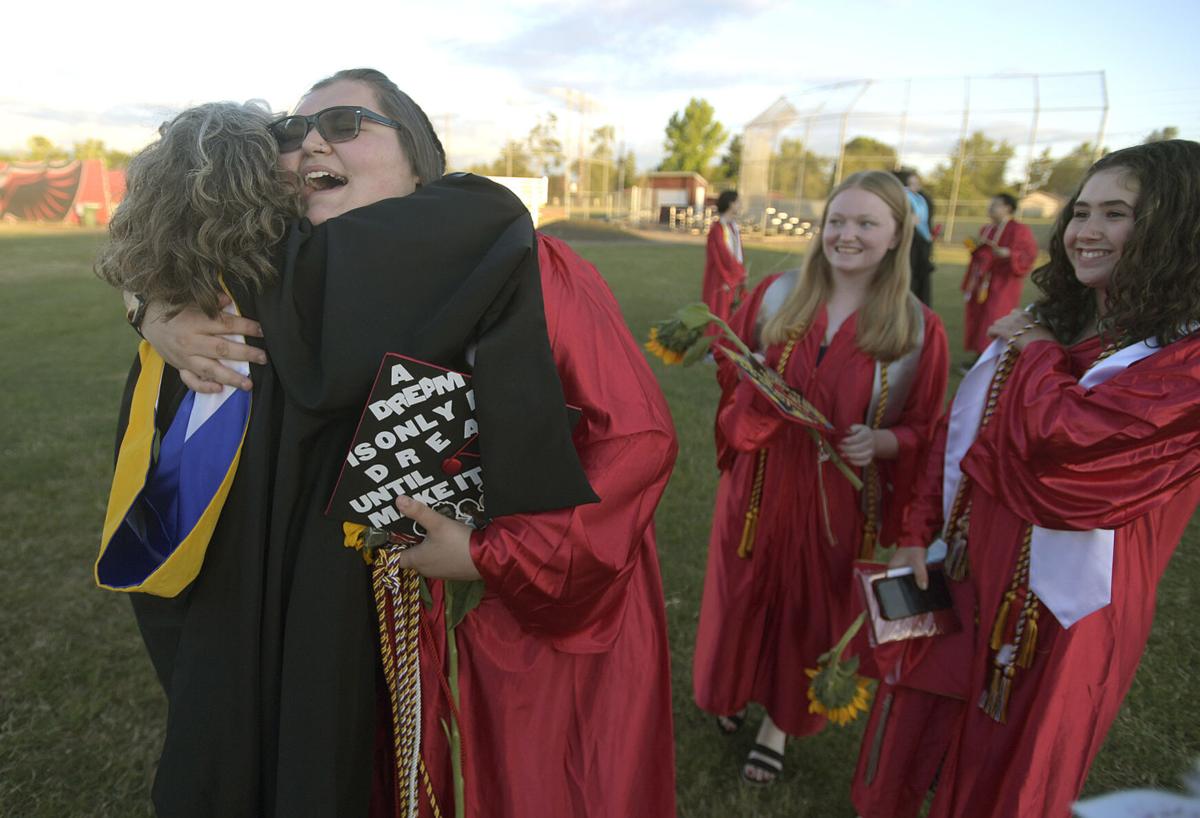 South Albany's Josie McNabb hugs faculty member Kathleen Jones while friends Ashlee Phillips and Courtney May wait to join in on the celebration. 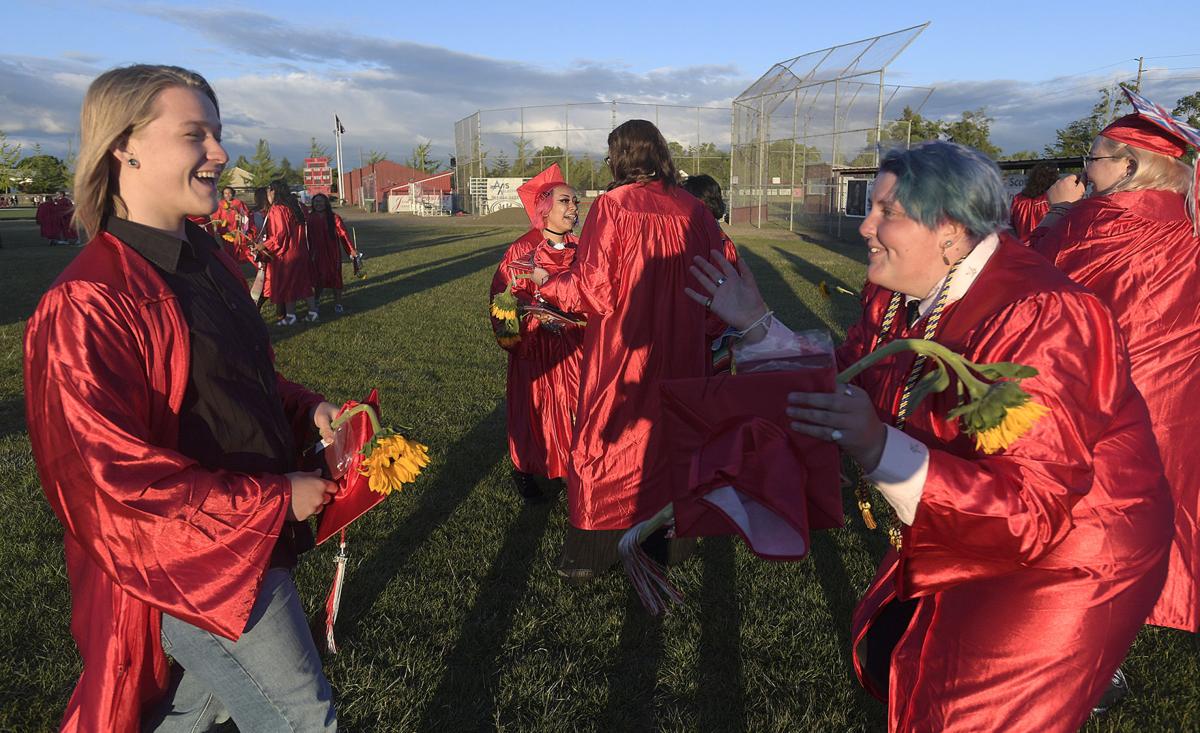 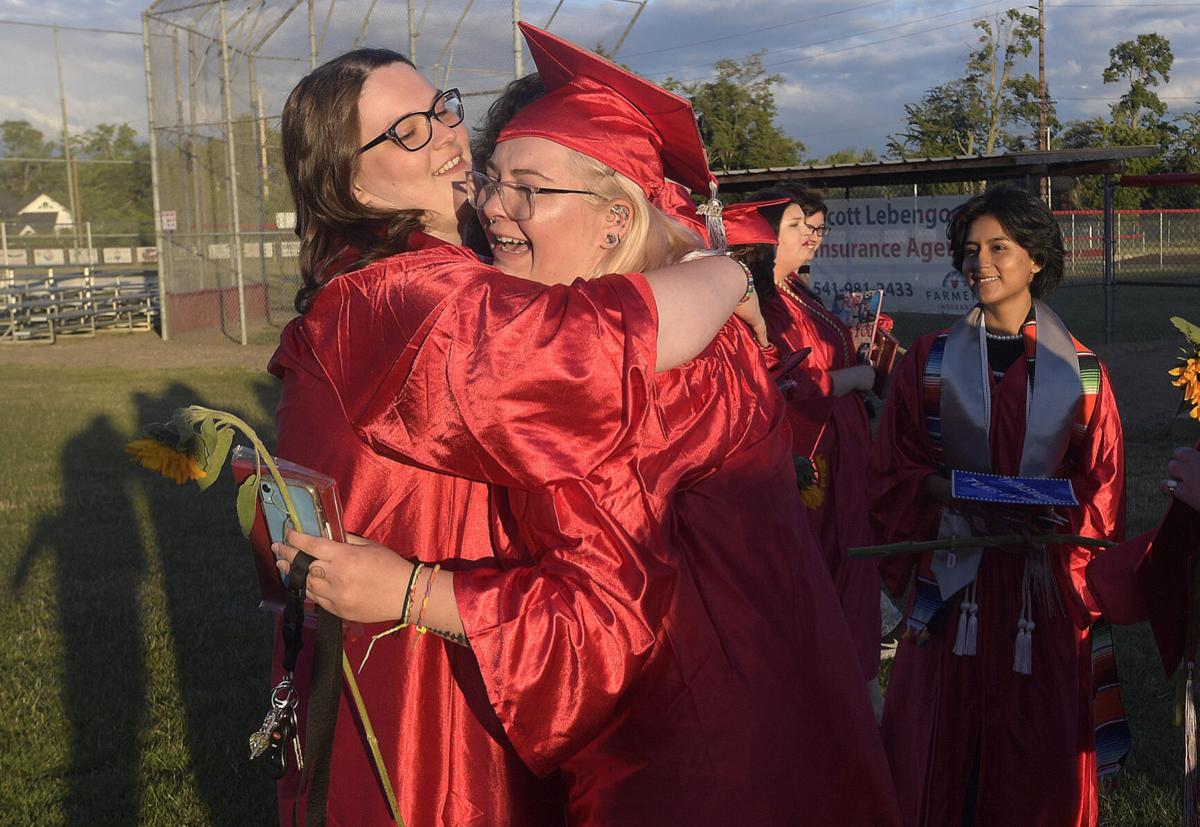 MID-VALLEY MEDIA
When John Hunter became principal at South Albany High School this past fall, the student leadership had a request for him: Could they all graduate together?
With easing pandemic restrictions, it turns out they could.
Close to 300 students in South Albany's 50th class celebrated together one last time Tuesday, receiving their diplomas on the RedHawks football field instead of in the usual Linn County Fair & Expo building so there would be enough room to practice social distancing.
"They got their biggest wish," Hunter said.
A 50th celebration usually is known as "golden," and Tuesday's ceremony complied: golden honors stoles, golden National Honor Society cords, golden sunflowers for each graduate and golden evening light spilling over the whooping and cheering audience.
"You are all golden," Hunter told the graduates. "I challenge you to go out into the world and be golden."
In many ways, students said, their high school career felt like anything but golden. The class of 2021 went through three principals, two fires and two years of construction before capping everything off with months of remote learning prompted by the COVID-19 pandemic.
"We have probably put up with more than any other class," Rena Howard, Associated Student Body spirit officer, said during her speech Tuesday. "We are probably the most successful and resilient class to walk these halls."

However, Howard noted, she and her classmates learned a few things in the process.
"One, make sure you are muted when you join a Zoom (class)," she said.

Your membership makes our reporting possible.
{{featured_button_text}}
Howard also urged her classmates to never take the small things for granted and to understand that nothing lasts forever.
Class President Ella Galvan agreed and encouraged the group to enjoy every minute.
"We never know when something as simple as school will be taken away from us," she said.
After the ceremony, graduates moved off the field together before reuniting with friends and family.
Creed Bodily said the year had its high points, such as "going to class in pajamas," while remote learning gave Hayden DeLair the opportunity "to go outside more often."
"I was excited to see all my friends; last chance to see everyone before we all split up and go our separate ways," said Camden DeFord.
Some are going farther than others. Megan Carter decorated her mortarboard with the British Union Jack and a picture of herself as a little girl to signify her next steps: moving to London to study international law. The picture of herself when she was small, she said, "is because she never thought she might be going."
Josie McNabb also plans a big move, but not for a while yet. She plans to study nursing at Chemeketa Community College and then move to Los Angeles to enroll in film school.
"I've got to get a degree where I can earn some good money before I go to film school," she said.
Under normal circumstances, McNabb said, she might have chosen to skip graduation. Not after this year, however: she learned the small things are bigger than you think.
"I say, 'Thank you for the odd year,'" she said. "It taught a lot of good lessons."

To view videos and a collection of photos from South Albany High School's graduation, go to our websites.

Check out these amazing secret tunnels built under Liverpool

Biden: We have to act now on climate change

Biden: We have to act now on climate change

Prep roundup: RedHawks get past Bulldogs in boys basketball

The Linn County Board of Commissioners on Tuesday approved an application for a 12-acre solar farm just outside of Albany. It placed a key con…

The Story Next Door: The quest for a kidney donor

Don’t worry, this story has a happy ending. But first, it starts out a bit sad and more than a bit complicated.

The mass vaccination clinics in Albany and Corvallis are coming to an end this week, though there are still a few days to secure a dose at the…

SALEM — Oregon's new program of paid family leave would be delayed under a bill that has cleared the House.

South Albany's Josie McNabb hugs faculty member Kathleen Jones while friends Ashlee Phillips and Courtney May wait to join in on the celebration.