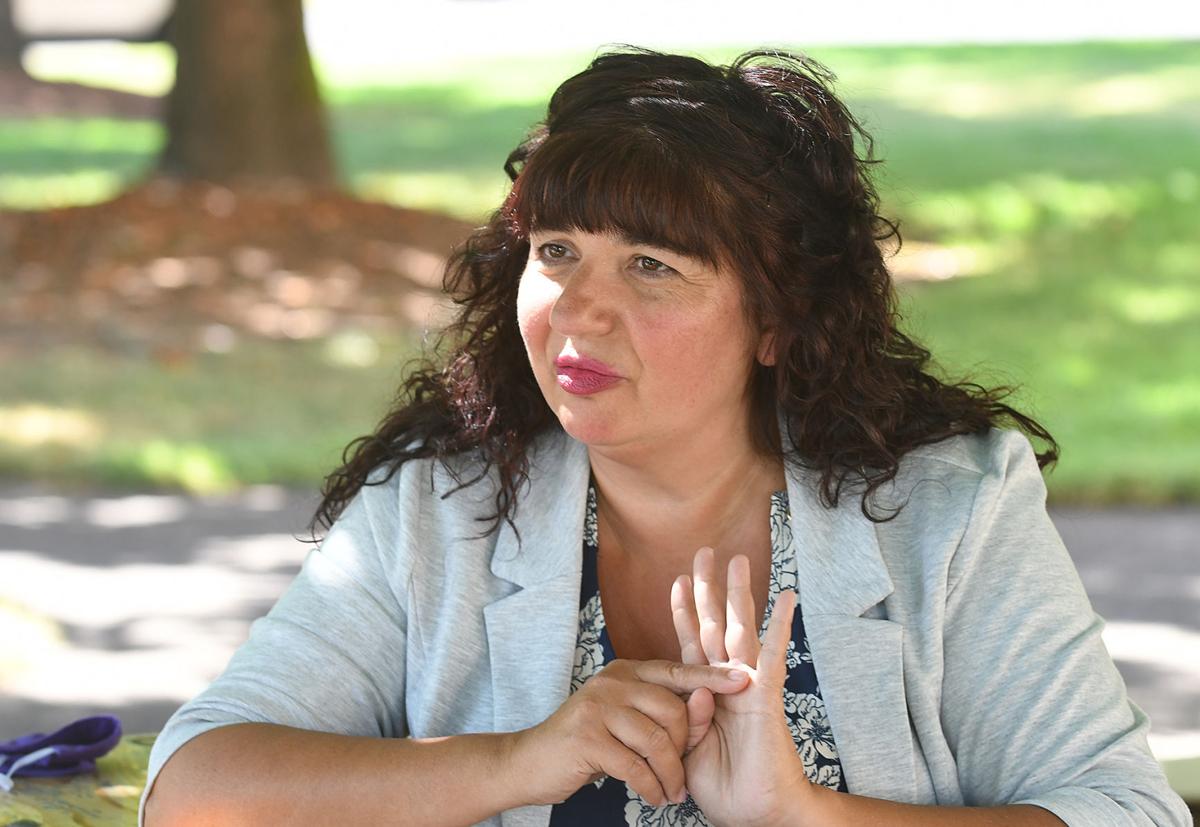 The only physical memory Ani Yardumian has from her days growing up during the Lebanese Civil War is a scar on her finger after cutting herself on broken window glass while playing in a stairwell during a lull in fighting. 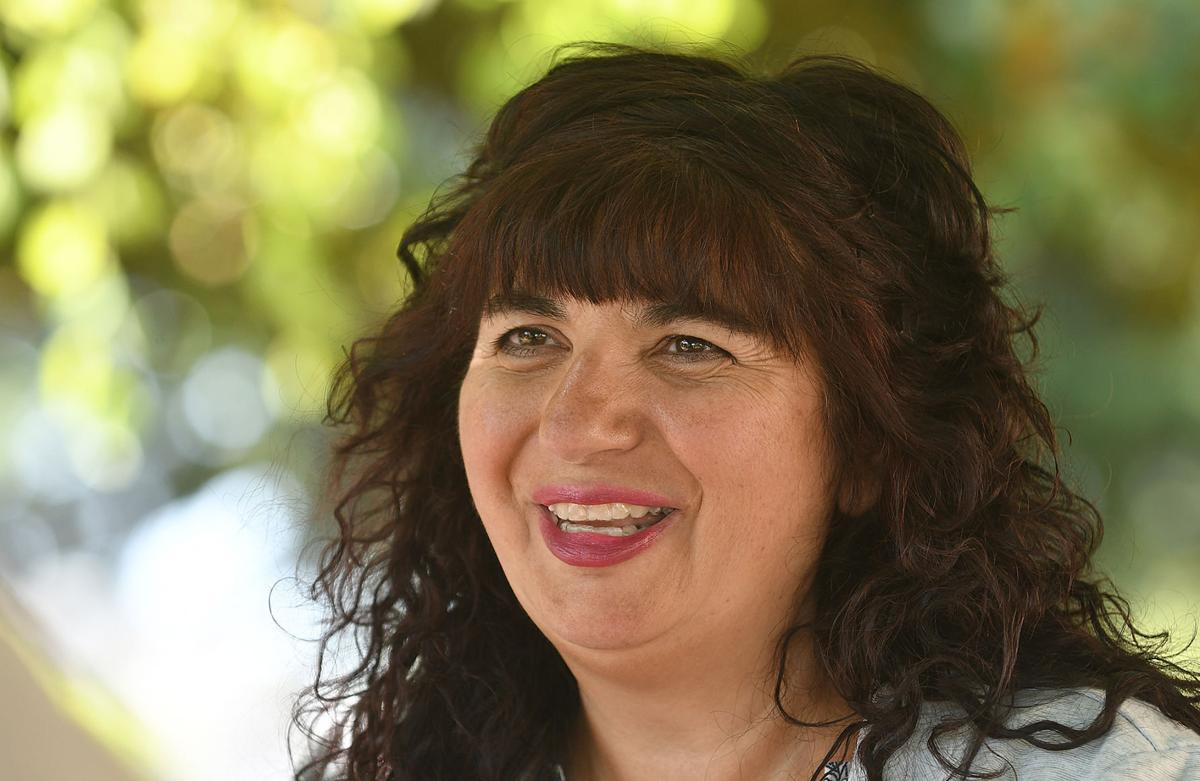 Ani Yardumian lived through the Battle of the Hotels conflict during the Lebanese Civil War. The Yardumian family's apartment was the front line where the Muslim led Lebanese National Movement took up positions while the Christian fighters of the Phalange KRF militia took up positions in the Holiday Inn hotel up the street. 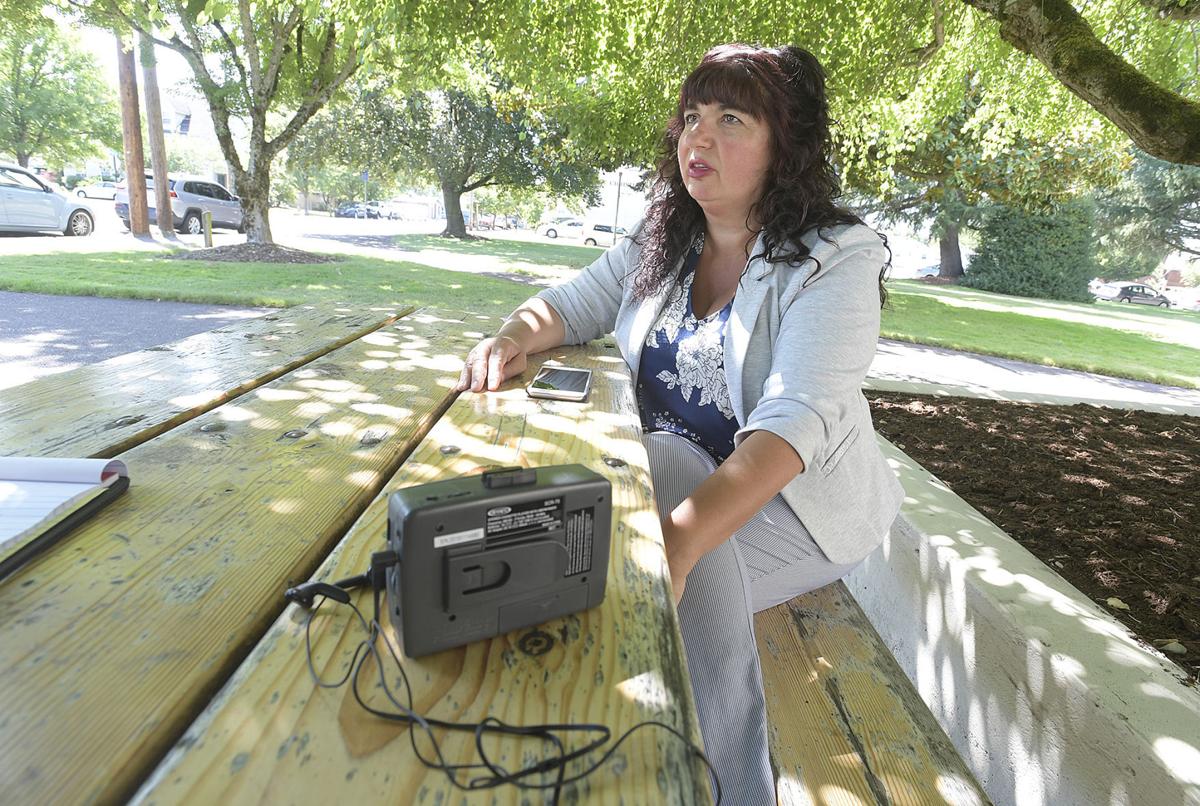 A tape player with the recordings of the sounds of war are one of the items Ani Yardumian has kept with her from the Battle of the Hotels conflict in the Lebanese Civil War. 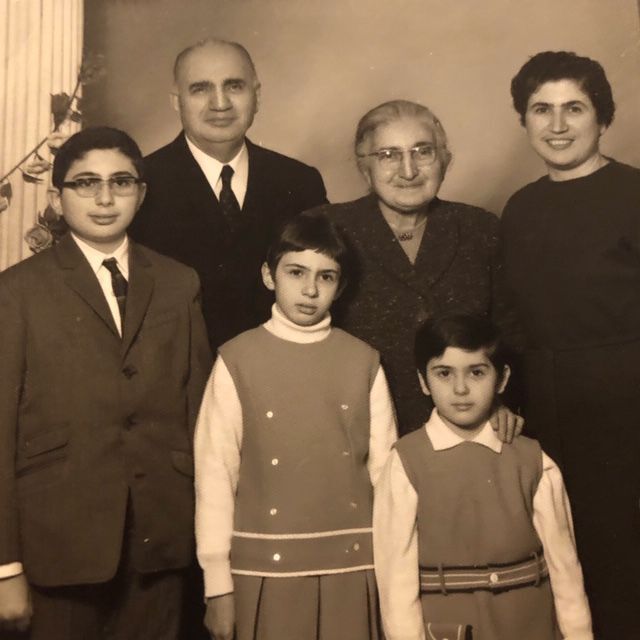 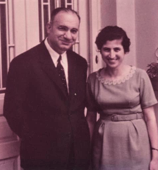 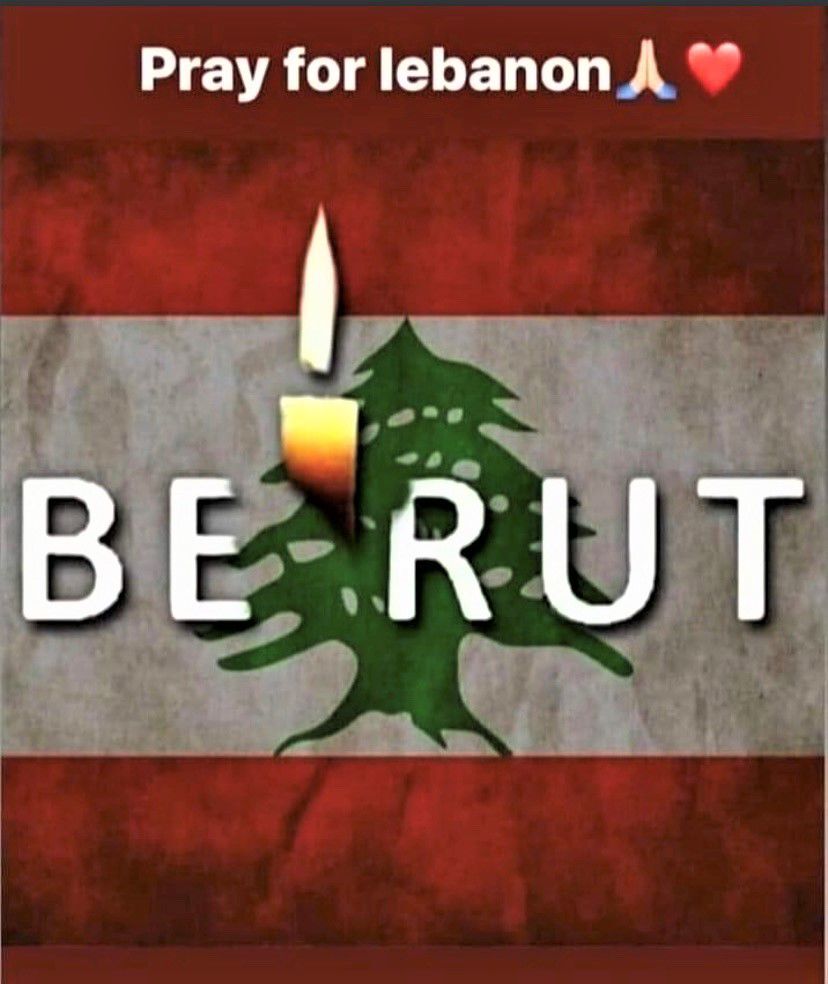 Ani Yardumian has a tiny scar on her left hand.

It doesn’t cause her any pain, but it does remind her of the terror she experienced as an 8-year-old child during the civil war in Lebanon in the mid-1970s.

She calls it her “war wound,” and it was caused by bullets shattering apartment windows.

It is physical evidence that there was a time when nearly every waking moment was spent worrying her family might be killed after armed insurgents captured their apartment complex in the heart of Beirut.

Those memories were jostled by the recent fertilizer explosion in her native city that killed 200 and injured 6,000 and the political bickering embroiling her adopted homeland, the United States.

Yardumian is the youngest of three children. Her father, Edward, was born in Turkey of Armenian descent — he was a survivor of the Armenian genocide of the early 1900s. Her mother, Francoise, was Lebanese.

“I had a normal childhood,” Yardumian said. “We were happy. We were loved. We had a good life.”

But their lives began to crumble in the fall of 1975 when warring factions took over their neighborhood.

“I remember because we had just gotten new books for a new school year, and I was excited about that,” Yardumian said.

Yardumian remembers hearing the roar of military tanks rumbling onto the street and the seemingly neverending sound of gunfire.

A neighbor captured the sounds with a tape recorder, and Yardumian has a copy of that tape.

The family’s apartment was in the center of the unrest between Muslims and Christians.

“We could sit at our dining room table, look out the window and see the Holiday Inn motel down the street, which was riddled with holes from bombs,” Yardumian said.

The motel damage remains, kept as a reminder of the war.

Soldiers ransacked their apartment building and took over her father’s dental office, which was also in the building.

“We were not allowed to go by any windows,” Yardumian said. “We were basically confined to two bedrooms away from the fighting side of the building.”

There was no electricity or running water.

For months after the initial fighting, when her neighborhood was “like a ghost town,” her parents would carry buckets of water from an abandoned gas station across the street and fill a bathtub. Yardumian said the water had a terrible taste.

“I felt so badly for our parents,” Yardumian said. “They had a total loss of control. It seemed liked adults all around them had gone mad.”

Yardumian said she remembers thinking that “at any given moment we could die, but I also thought it would be over our parents’ dead bodies. They weren’t going to let anything happen to us.”

After several weeks, the fighting subsided, and by 1976, Yardumian’s father had secured visas to move his family to the United States.

“We received our visas shortly before they closed the U.S. Embassy in Beirut. We were very fortunate,” Yardumian said.

In June 1976, U.S. Ambassador Francis Meloy Jr., his economic adviser Robert Waring and Zoheir Mohgrabi, an embassy employee, were killed. The U.S. Navy evacuated 263 embassy employees and others escaped to other countries.

Their first “escape” was from their apartment building, Yardumian said.

A cousin arranged for a brief ceasefire to allow Yardumian’s family to leave the building and make their way to other family members.

“What always amazed me was that while the factions were fighting and trying to kill each other, they were willing to cooperate together for the sake of one family that neither side knew,” Yardumian said. “And of course, those that occupied our building not only didn’t kill us, they helped us. But there was still the risk of snipers, so they shielded us as we ran across streets trying not to get shot.”

Yardumian said she remembers walks along the Mediterranean, the sounds of gunfire easily heard in the distance.

Later, at her aunt’s home, their escape out of Beirut was planned.

Getting out of Beirut would not be easy, visas or no visas. There were no planes, trains or buses, so they were going to have to walk a long way to hook up with someone with a car who would smuggle them out of the country.

The family was destined for an aunt’s home in Jordan in July 1976.

“It was a very small car, and it was a long drive,” Yardumian said. “We couldn’t even call on the telephone to let them know we were coming. We just showed up. It was a long trip. We traveled through Syria and arrived late at night.”

Yardumian said when they arrived, it was as though the “entire neighborhood was there to greet us. Everyone was so hospitable and welcoming.”

The family stayed in Jordan for two weeks and then flew to the United States to start a new life.

“My father was 65, and his business was gone. We were financially devastated,” Yardumian said. “We were on public assistance. I am extremely grateful to America. There is so much negativity right now, but this is the country that took us in, gave us opportunity and helped us until we could get back on our feet.”

Yardumian spoke only rudimentary English upon her arrival in the United States.

“I was extremely shy, very quiet,” she said. “I loved books.”

But she knew by the time she was 13 that she wanted to become a lawyer — specifically, a prosecuting attorney.

Her brother, Hrant, six years her senior, was 15 when the family arrived in southern California, where relatives lived. He found a job to help support the family.

“He supported us while my sister, Marina, went through school,” Yardumian said.

Both siblings have done well. Hrant is employed by Chevron, and Marina is a nurse.

Yardumian graduated from Bonita High School in Laverne, California, majored in English at Cal Poly-Pomona and then earned a law degree in two years from Southwestern Law School in Los Angeles.

She learned of an opening in the Linn County District Attorney’s Office during a two-month internship here. She has been with the office since 1994.

“It’s very satisfying,” she said of her work. “It’s difficult to say I enjoy it, because we deal with some very hard issues. But it is fulfilling to do the job right.”

Yardumian says she gets satisfaction from cases where she helps children.

“I think on some level, I empathize with children who, through no fault of their own, have had their childhood innocence taken away from them. We all stopped being children at the first sound of gunfire.”

Yardumian reflects often on those harrowing weeks 45 years ago.

“It’s difficult sometimes for my friends to understand when I tell them I lived through a war,” Yardumian said. “I remember we were always worried about when and where the next explosion was going to occur.”

Yardumian said it is difficult for her to listen to fireworks since the sounds remind her of gunfire.

Yardumian has never returned to Beirut, although she would like to visit someday and view it with adult eyes.

She has visited her aunt Jeanette Hamati in Jordan twice.

“I realized in 2009, after our mother died, that I had never thanked our aunt for taking us in,” Yardumian said.

“I wondered if she would recognize us after all these years,” Yardumian said.

She did. She told the sisters, “What the heart loves, it will always recognize.”

Asked whether she considers herself Lebanese or American, Yardumian quickly says, "Both."

Her cell phone case may say it best. It’s an image of a cedar of Lebanon tree layered over the American flag. The cedar represents holiness, eternity and peace.

“I am so lucky,” Yardumian said. “I feel as though I have had the very best that each country has to offer.”

Linn County ahead of 2010 Census responses

The deadline for the 2020 census has been moved up a month, but with a few weeks left to go, Linn County has already surpassed its 2010 respon…

The only physical memory Ani Yardumian has from her days growing up during the Lebanese Civil War is a scar on her finger after cutting herself on broken window glass while playing in a stairwell during a lull in fighting.

Ani Yardumian lived through the Battle of the Hotels conflict during the Lebanese Civil War. The Yardumian family's apartment was the front line where the Muslim led Lebanese National Movement took up positions while the Christian fighters of the Phalange KRF militia took up positions in the Holiday Inn hotel up the street.

A tape player with the recordings of the sounds of war are one of the items Ani Yardumian has kept with her from the Battle of the Hotels conflict in the Lebanese Civil War.