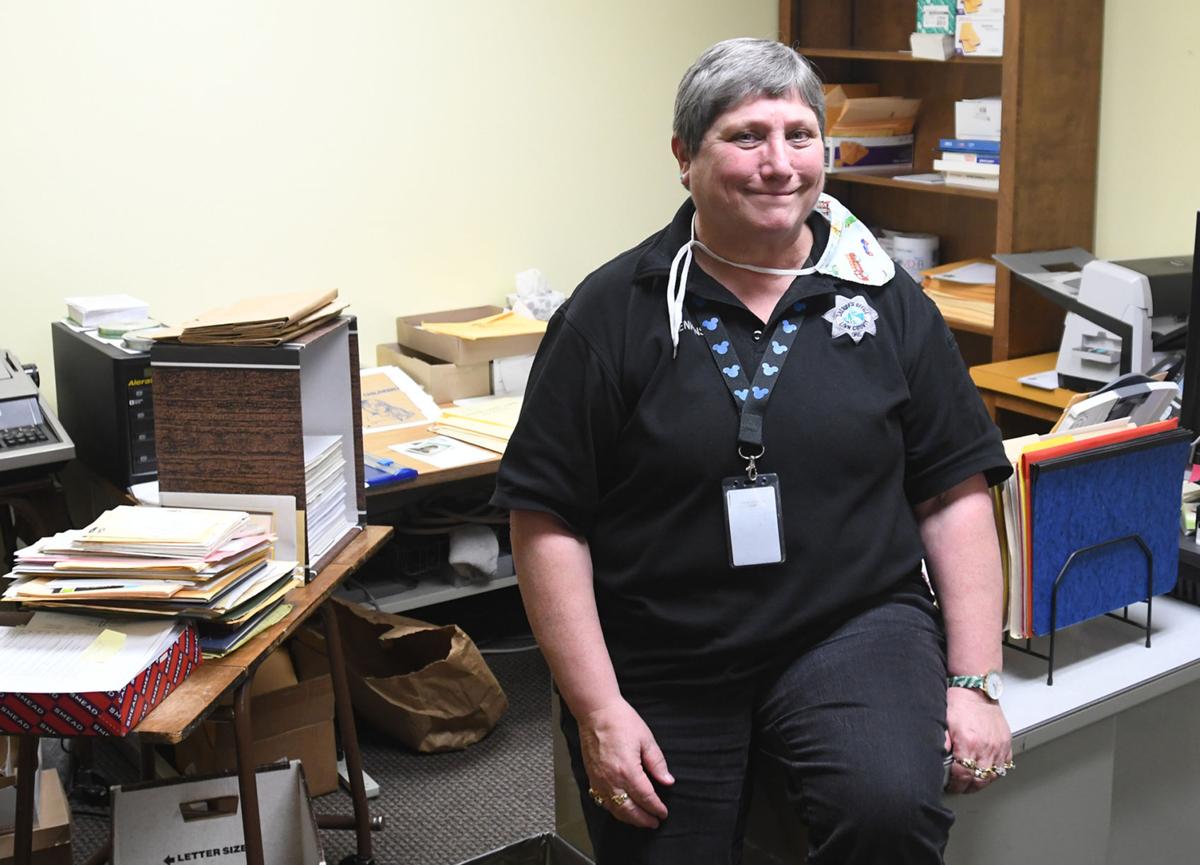 Geri Jenkins retired on Monday after 43 years with the Linn County Sheriff's Office. She started as a matron and retired after decades of being in charge of records. 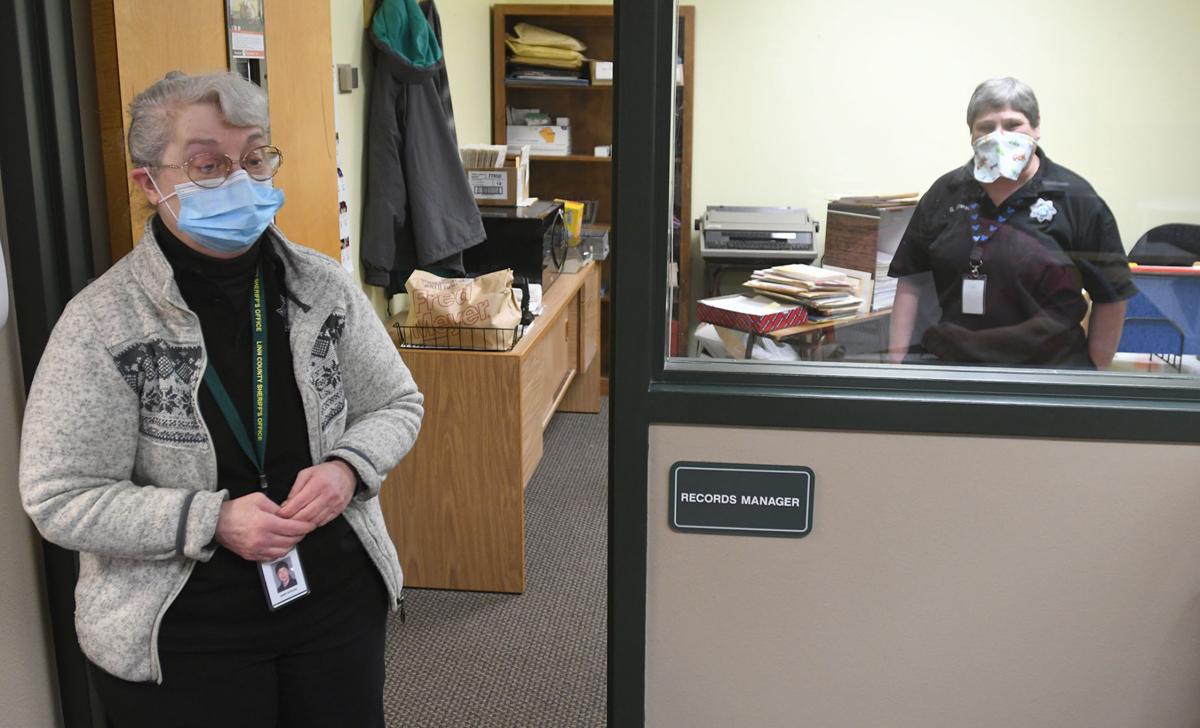 Mary Sitsler, foreground, worked with Jenkins for 32 years and praised her for her leadership skills and dedication to her work. 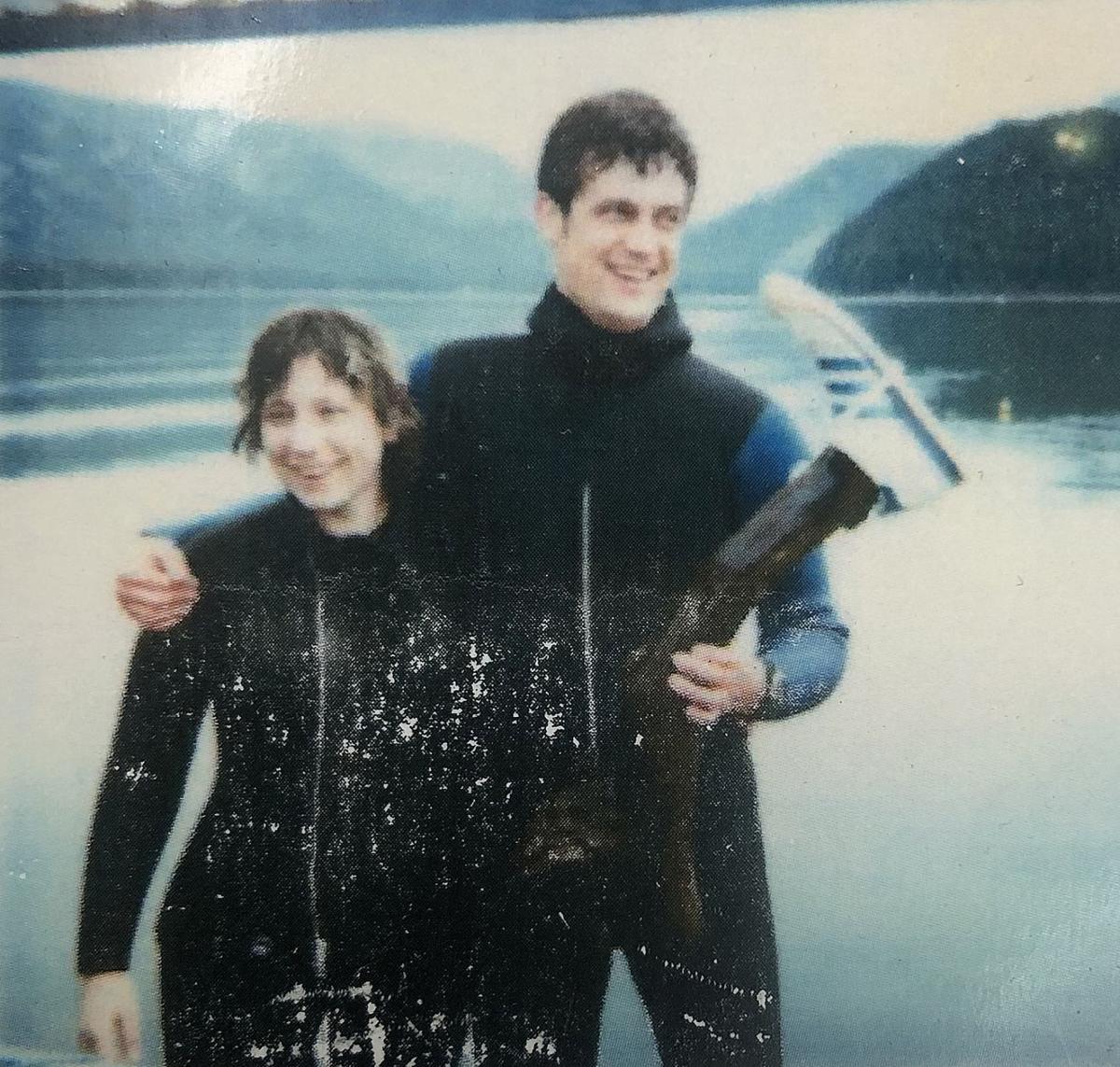 Geri Jenkins, who was the first female member of the Linn County Sheriff's Office dive team, poses with future Sheriff Dave Burright after recovering a stick and a boot at Detroit Reservoir in May 1984 after someone thought they had seen a human leg in the water.

When 20-year-old Geri Jenkins was hired by Linn County Sheriff Ken Goin in 1977, her job title was “matron.”

She hasn’t been called that in years.

Monday, Jenkins capped a 43-year career at LCSO, 32 of those years as the records manager — not bad for someone who was “extremely shy” on her first day of work.

“My mother’s friend, Shannon Willard, the former county treasurer, told me about the job opening,” Jenkins said, taking a moment away from cleaning out her office. “I’m guessing most people never thought I would make it this long.”

Jenkins said she has enjoyed her work, but especially enjoys the people she has worked with.

“They are wonderful people. They care about each other and stick together,” Jenkins said.

Jenkins picks up a photograph taken in 1984 that shows Jenkins — the first female member of the LCSO dive team — and former Sheriff Dave Burright wearing diving suits. Burright was holding a big stick and a boot.

“We heard someone saw a leg in Detroit Lake,” Jenkins said. “All we found was a stick and a shoe.”

Burright said a dive instructor had taken a class up to Detroit Reservoir for a final exam. One of the female divers saw what she thought was a decomposed leg, panicked and headed for the surface, which can be dangerous if done too quickly.

“We went up there the next day and the water was very clear,” Burright said. “Geri and I were working together and we both saw the stick and knew that was what the woman probably saw that night, when everything looks so different underwater.”

Burright said Jenkins always “quietly went about her business and got the job done. I always appreciated her work and she was my go-to person in records. When I needed something, she could always give me the hand that was needed.”

Burright concurred with current Sheriff Jim Yon that Jenkins will take a lot of institutional knowledge with her.

“I’m happy for her. I’ve been teasing her for years about it being time to pull the plug,” Burright said.

She grows a bit melancholy when talking about her fellow employees who have passed away over the decades.

“In the early days, we had two matrons per shift,” Jenkins said. “Our job was to search female prisoners. There weren’t nearly as many as there are today. We took in a lot of drunk females after midnight.”

That was when the jail and the sheriff’s office were in the courthouse.

Jenkins attended the state police academy in 1979 and said it was “a lot of fun.”

“That’s when it was just seven weeks,” Jenkins said.

There was a lot of chauvinism on the job in those early days, Jenkins said.

“We weren’t supposed to walk on the same sidewalk as the men, or have coffee with them,” Jenkins said. “Well, we did anyway. I never thought I would stand up for myself, but I did.”

By the mid-1980s, female deputies became more common, and in 1988, Jenkins settled into the records division.

“In those days, computers were just starting to come in,” she said. “We would transcribe deputies’ reports and input warrants into the law enforcement system and work reception at the front desk. I even helped transport inmates, but never worked patrol.”

Jenkins' mother, Barbara Jenkins, has owned a tax preparation service in Albany for decades. Both Jenkins and her husband help her during tax season.

“It’s going to be different this year, not having this job plus that work,” Jenkins said.

Jenkins said the thought of “not having someplace to go every day” is a bit scary.

“But I’m kind of looking forward to it,” she said.

The COVID-19 pandemic has already tossed a wrench into her retirement plans.

“We were supposed to go on a cruise to Ireland but had to cancel that,” she said.

Mary Sitsler has worked with Jenkins for 32 years.

“She has been a wonderful boss,” Sitsler said. “Whenever I needed help, she usually always had the answers.”

Capt. Micah Smith praised Jenkins, noting that when she started with the Linn County Sheriff's Office, there was one LEDS computer.

“Now, we run a world-class document management system, the same one used at the Pentagon,” Smith said. “We have a robust records management and crime reporting software shared across two counties. Geri is instrumental in not only the success of records management here at the Sheriff’s Office, but has been integral to the design and pathway that Oregon as a whole has taken during her tenure here. She is widely known around the state.”

Sheriff Jim Yon has known Jenkins since he was completing his college practicum and worked in the records office with her.

“She has basically crafted our records management system,” Yon said. “She has led us through numerous technology changes to the point we are today. She has led the charge for decades.”

Yon said Jenkins impressed on him the importance of providing quality information for all records and maintaining a high standard of work product.

“That has stuck by me all of these years,” he said. “She is always looking out for the office first. How we hold and release records are extremely important to her.”

Yon said that although he is happy for Jenkins as she takes a new path in life, “it is a tremendous loss for our office. She has so much institutional knowledge. When we can’t remember why something was done a certain way, Geri can tell it was because of X, Y and Z.”

The first week of December won't see a parade of cars weaving their way through the streets of downtown Albany. There will be no floats. No pa…

Geri Jenkins retired on Monday after 43 years with the Linn County Sheriff's Office. She started as a matron and retired after decades of being in charge of records.

Mary Sitsler, foreground, worked with Jenkins for 32 years and praised her for her leadership skills and dedication to her work.

Geri Jenkins, who was the first female member of the Linn County Sheriff's Office dive team, poses with future Sheriff Dave Burright after recovering a stick and a boot at Detroit Reservoir in May 1984 after someone thought they had seen a human leg in the water.