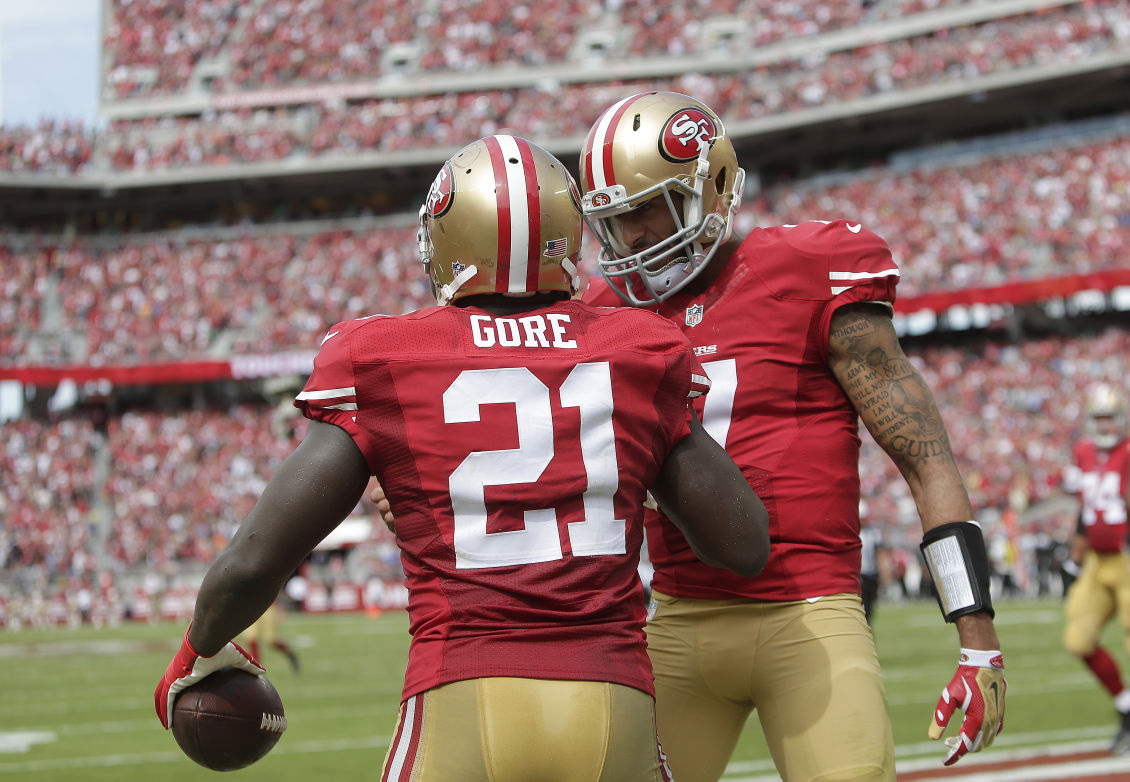 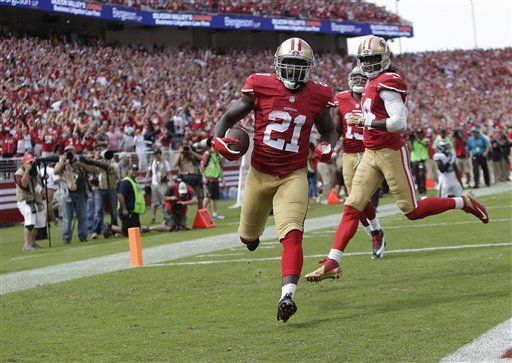 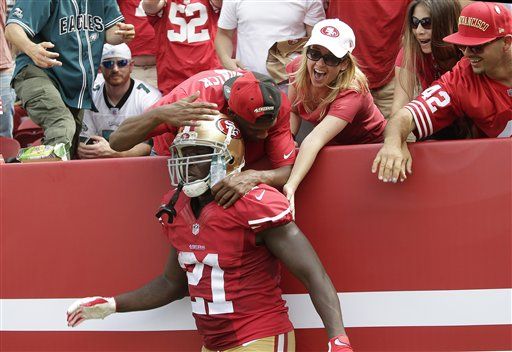 San Francisco 49ers running back Frank Gore (21) celebrates with fans after scoring on a 55-yard touchdown reception against the Philadelphia Eagles during the second quarter of an NFL football game in Santa Clara, Calif., Sunday, Sept. 28, 2014. (AP Photo/Marcio Jose Sanchez) 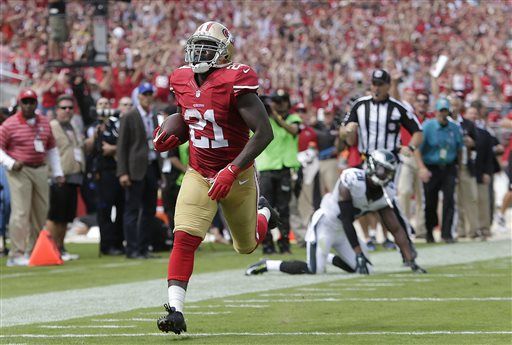 SANTA CLARA, Calif. — Frank Gore caught a career-best 55-yard touchdown and ran for 119 yards in his first 100-yard game this year, leading the San Francisco 49ers past Philadelphia 26-21 on Sunday to hand the Eagles their first loss.

The 49ers delivered a late goal-line stand as they avoided their first three-game losing streak under fourth-year coach Jim Harbaugh, containing the league's top passer in Nick Foles. He threw two incomplete passes from the 1 in the waning moments.

Darren Sproles had a career-best 82-yard punt return for a touchdown, Malcolm Jenkins ran an interception 53 yards for a score for the Eagles (3-1). Brad Smith recovered a blocked punt for a TD.

PITTSBURGH — Mike Glennon hit a diving Vincent Jackson for a 5-yard touchdown with 7 seconds remaining to lift Tampa Bay to a stunning win.

The Buccaneers (1-3) lost to Atlanta by six touchdowns a week ago but bounced back. Glennon passed for 302 yards in his first start of the season, including a 41-yard catch-and-run by Louis Murphy that set up Jackson's score.

The Steelers committed 13 penalties for 125 yards.

The Cowboys kept Drew Brees and the Saints scoreless in the first half after giving up an NFL-record 40 first downs in a 49-17 blowout loss in New Orleans last year. Brees led two scoring drives early in the fourth quarter to cut a 31-3 deficit in half before the Cowboys regained control.

Dallas (3-1) is tied with Philadelphia for the NFC East lead.

The Saints (1-3) couldn't sustain the momentum from their win against Minnesota and lost to the Cowboys in Texas for the first time since 1991.

BALTIMORE — Steve Smith punished his former team with seven catches for 139 yards and two touchdowns. Smith spent 13 seasons with Carolina before he was released in a cost-cutting move during the offseason. The 35-year-old receiver showed the Panthers he can still make the big play, scoring twice in the second quarter to help put Baltimore (3-1) in front 21-7 at halftime.

The first touchdown came when Smith grabbed a pass that deflected off the right hand of teammate Owen Daniels. He caught the ball in stride and took it into the end zone to complete a 61-yard play.

Smith also scored from 21 yards with a diving reception.

Carolina (2-2) has lost two straight, both in lopsided fashion against AFC North foes.

CHICAGO — Aaron Rodgers threw for 302 yards and four touchdowns, and the Packers shook off one of their worst offensive performances in years.

They intercepted Jay Cutler twice in the third quarter to pull away from the Bears (2-2). That gave Green Bay five straight wins at Soldier Field, including the NFC title game four years ago and a playoffs-or-bust finale for both teams last season.

Royal had scoring catches of 47 and 43 yards, his second straight two-touchdown game. The Chargers (3-1) extended their winning streak to three.

Passing because the Chargers' running game is nonexistent due to injuries to Ryan Mathews and Danny Woodhead, Rivers had his second three-touchdown game of the season. He went 29 of 39.

Royal had five catches for 105 yards. Keenan Allen had 10 for 135, both career highs, and Malcom Floyd had a 24-yard touchdown catch.

Rookie Blake Bortles made his first start for the Jaguars (0-4), threw one touchdown pass, was intercepted twice and twice had Jacksonville in the lead in the first half.

MINNEAPOLIS — Teddy Bridgewater passed for 317 yards and a key 2-point conversion before leaving with an ankle injury. The rookie was 19 for 30 with no turnovers and ran five times for 27 yards and a score in his first career start, but his last carry was costly. His left foot rolled underneath him as he was sandwiched by two tacklers at the 1-yard line.

Matt Asiata powered his way in on the next play for his third touchdown, and Bridgewater stayed in to zip a crisp pass to Rhett Ellison to push the lead to 35-28.

As Bridgewater was taken away on a cart for X-rays, Christian Ponder took over at quarterback for the Vikings (2-1).

HOUSTON — J.J. Watt had another highlight-reel play to help the Texans overcome a tough day offensively. Houston (3-1) was down by three in the third quarter and Ryan Fitzpatrick had just thrown a second interception when the 6-foot-5, 289-pound Watt returned an interception 80 yards to put the Texans up 14-10.

The defensive end caught a touchdown pass in Week 2, giving him more TDs this year than Arian Foster and Andre Johnson combined.

Under heavy pressure all afternoon, EJ Manuel finished with 225 yards passing with two touchdowns and two interceptions for the Bills (2-2). Buffalo was driving late when Darryl Morris picked him off at the Houston 15 to secure the victory.

EAST RUTHERFORD, N.J. — Matthew Stafford threw two touchdown passes and ran for another score as the Lions overcame Calvin Johnson being limited by an ankle injury.

Jeremy Ross and Eric Ebron caught scoring passes for the Lions, who are 3-1 for the second straight season. Stafford finished 24 of 34 for 293 yards.

Johnson, who was in and out of the game, was clearly impeded by his injured ankle. He had just two catches for 12 yards. Golden Tate had a big game, catching eight passes for 116 yards.

A struggling Geno Smith had two more turnovers as chants of "We Want Vick!" echoed throughout MetLife Stadium at times. The Jets, who made it close on Chris Johnson's 35-yard run with 6:58 left, fell to 1-3 for the first time in Rex Ryan's six seasons as coach.

LONDON — Ryan Tannehill threw for 278 yards and two touchdowns in the latest international game. Tannehill, in the middle of a storm all week because his coach declined to confirm him as the starter, took advantage of a depleted Oakland defense to snap a two-game losing streak for the Dolphins (2-2).

The Raiders (0-4) scored on their opening drive but struggled after that. And starting quarterback Derek Carr was injured in the third quarter, replaced by third-stringer Matt McGloin.

Tannehill threw a 13-yard touchdown pass to Mike Wallace and an 18-yarder to Dion Sims. Lamar Miller rushed for two more TDs, and cornerback Cortland Finnegan ran back a fumble 50 yards for another.

Tennessee (1-3) has lost three straight since an impressive season-opening win over Kansas City, and this one wasn't even close.

Indy led 14-0 after one and made it 20-3 with two Adam Vinatieri field goals. Tennessee closed to 20-10 at halftime, but Luck's two third-quarter TD passes made it 34-10 and the Titans never challenged again.

Watch Now: Trump goes to court to get his Twitter back

San Francisco 49ers running back Frank Gore (21) celebrates with fans after scoring on a 55-yard touchdown reception against the Philadelphia Eagles during the second quarter of an NFL football game in Santa Clara, Calif., Sunday, Sept. 28, 2014. (AP Photo/Marcio Jose Sanchez)