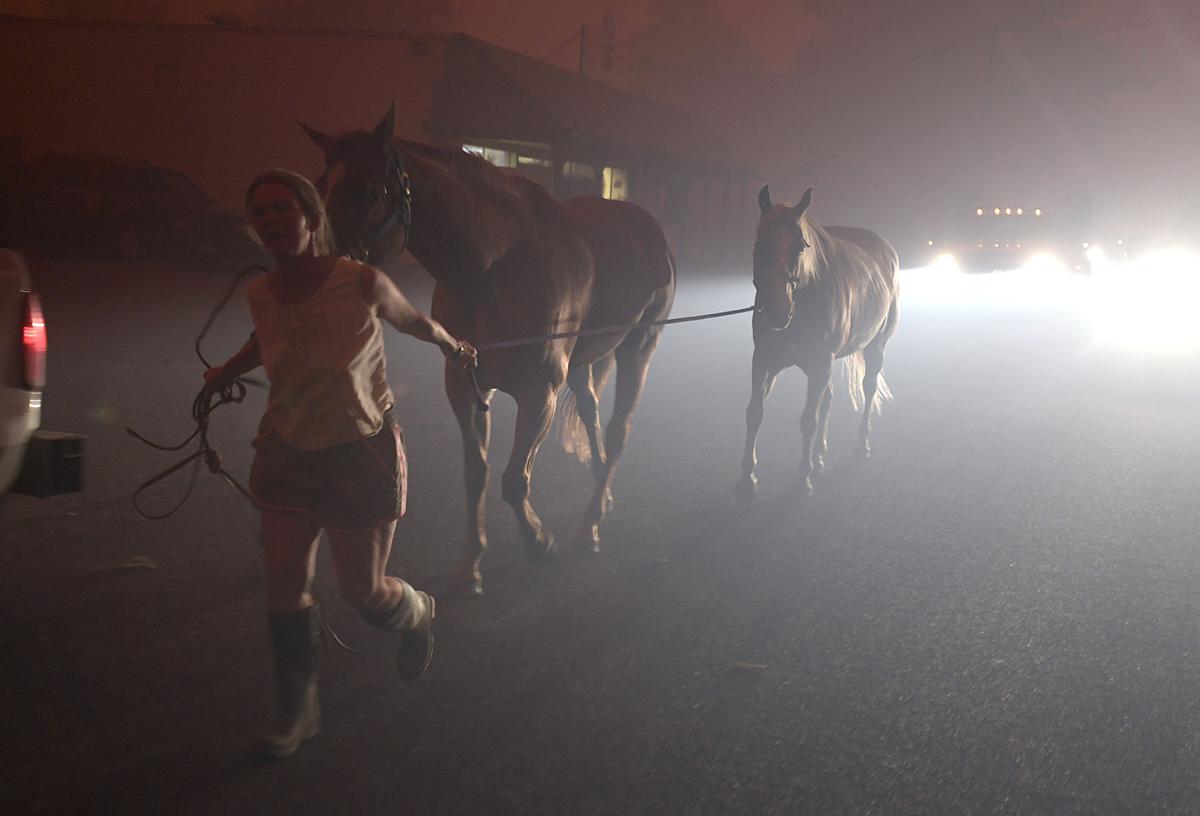 Jennifer Steckler walks two horses along Highway 226 in Lyons Tuesday morning. Steckler had walked the animals for more than 2 miles during the mandatory evacuation of North Santiam Canyon communities. 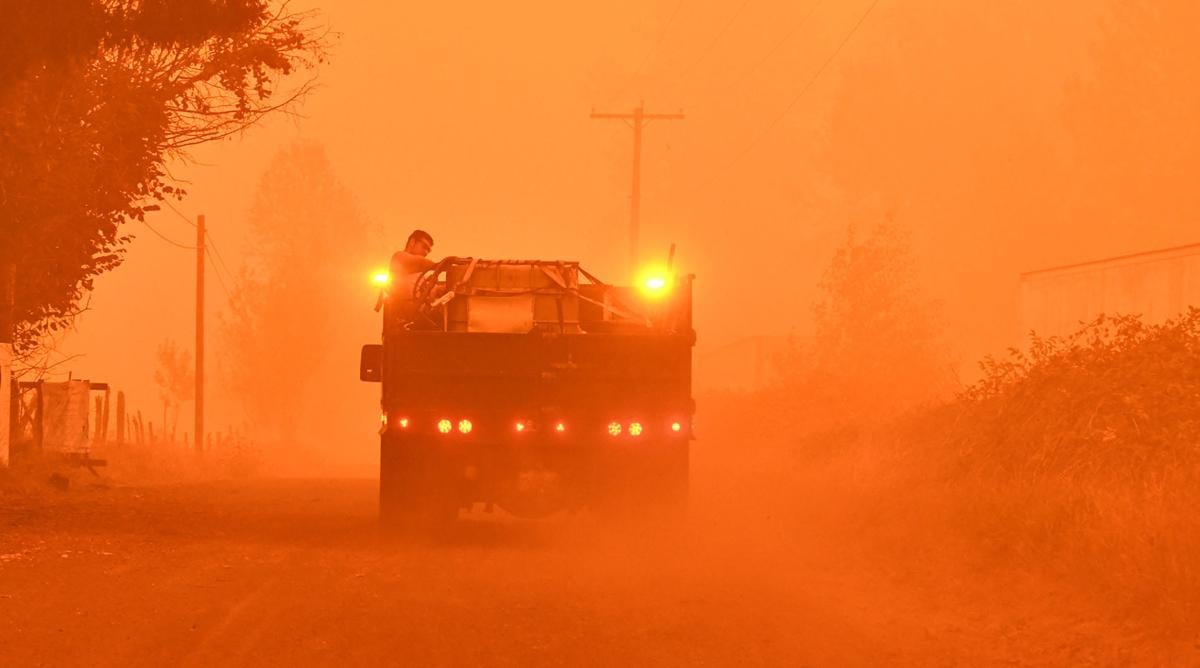 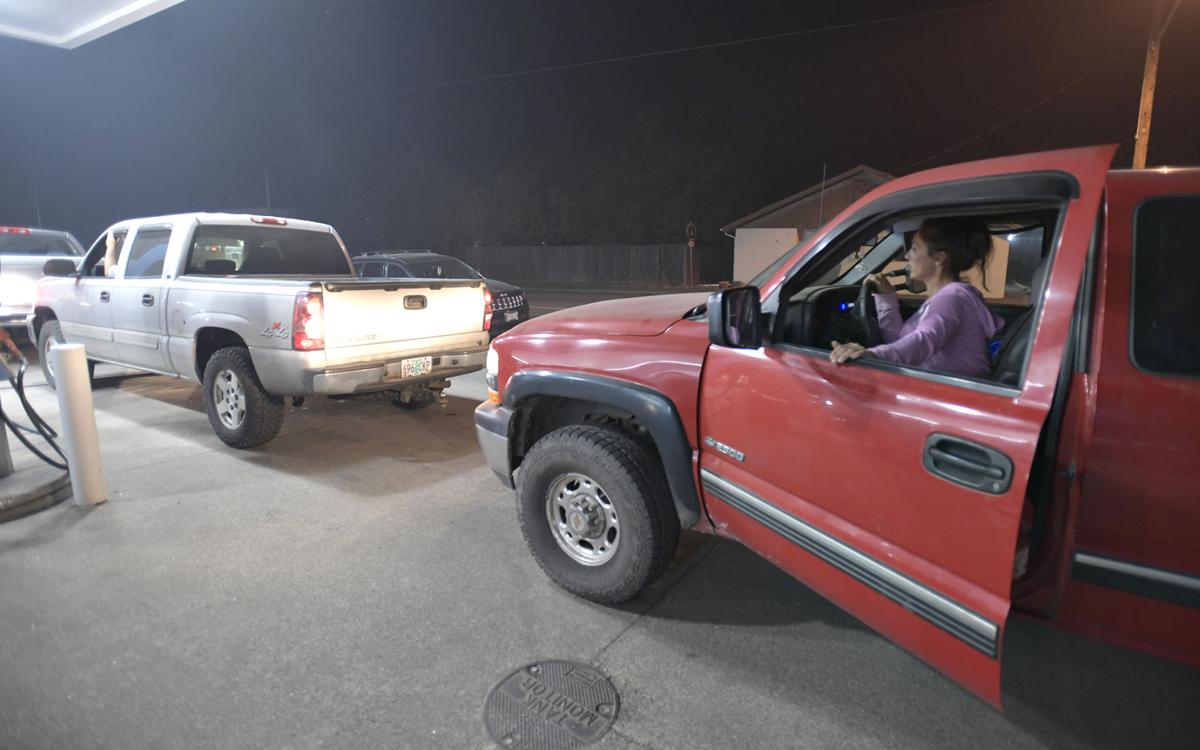 Cassandra Schrunk waits in line shortly before 8 a.m. on Tuesday at a gas station in Scio. Schrunk spent the evening helping evacuate horses from the Hungry Hill area and was on her way to Lyons area to help evacuate more.

A fire vehicle's emergency lights cut through the smoke in Lyons Tuesday morning. 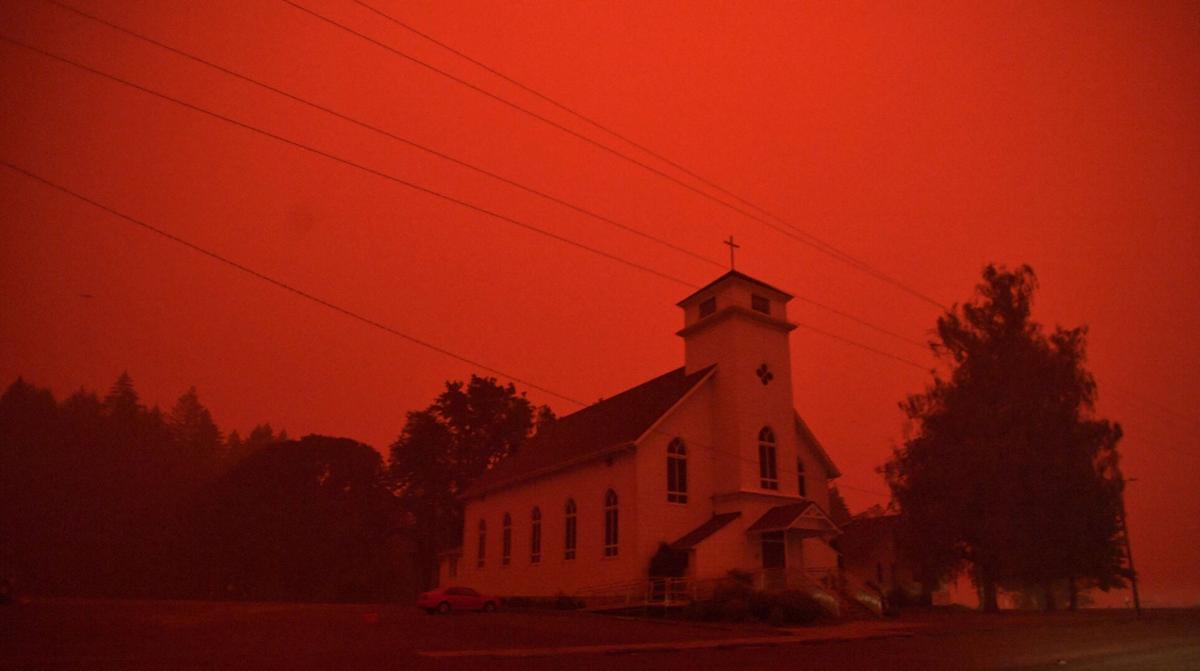 SANTIAM CANYON — Wind gusts of 60 to 80 miles per hour fanned forest fires throughout much of eastern Linn County Monday evening, forcing the evacuation of Gates, Idanha and Lyons residents.

The fires caused extensive damage to numerous business, homes and the Gates School.

Tuesday morning, a thick layer of ash covered vehicles and buildings in Albany, and at 8 a.m. blocked out the morning sun, casting an eerie darkness for much of the day.

“The winds were absolutely howling,” Linn County Sheriff Jim Yon said. “We evacuated people from the Linn County side of Gates through McCully Mountain. I saw a tree burst on fire right in front of me in Mill City.”

The Linn County commissioners have opened the fairgrounds in Albany as an evacuation center, and the Benton County Fairgrounds has been identified as a potential overflow site if needed. In Marion County, the State Fairgrounds is also an evacuation site.

“We had 15 people out, including myself,” Yon said. “There was significant damage, with many houses completely gone. The wind was so strong, it carried embers.”

Spot fires started from downed power lines, but also from low humidity and high static charges in the air that caused arcing between power lines and trees, Yon said.

“There were so many trees down we basically put people on foot going door to door from Mill City to Lyons,” Yon said.

Kelly Lumber was one of the canyon’s oldest establishments, founded in 1949. The business posted on its Facebook page that no one was injured and the company mascot, Socks, was unharmed.

There were numerous messages of encouragement for the hometown lumberyard, including one that noted they were looking forward to the business rebuilding “so we can all rebuild.”

The Marion County Sheriff's Office issued a level 3 "go now" evacuation order for the towns of Mehama, Mill City, Gates, Detroit, Idanha and the North Fork corridor, as well as the rural area between Cascade Highway Southeast and Mehama.

“We care deeply about the safety of all of our community members. The extreme fire activity in the area poses an imminent danger to anyone who chooses to remain in the evacuated area,” Marion County Sheriff Joe Kast said in a prepared statement. “Our deputies are committed to helping keep our community safe; however, conditions have become too dangerous for them to continue with evacuation efforts at this time. I encourage anyone still in the Santiam Canyon to leave immediately, following the deputies out of the area. I cannot say when the conditions will allow deputies and other emergency responders to return to the area to render assistance. Please leave now.”

Three men from Gates and one from Lyons were talking while standing in front of the Lyons fire station Tuesday morning.

“We were the last people up there,” Gary Henness said.

“Gates School is gone,” Scott Classen added. “It was burning so hot at the top of the hill we couldn’t go down the hill where the school used to be.”

Classen said timber behind the airport was also on fire.

Classen wondered if all the helicopters were going to be gone. There was a Chinook and a Sky Crane still at the airport, but the crews all had been evacuated, Classen said.

“At 1:30 this morning it looked like Interstate 5,” Henness said of evacuation traffic in downtown Lyons.

Craig Pettinger of the Oregon Department of Forestry’s Sweet Home Unit said the summer firefighting team put out “seven or eight” fires Monday night and Tuesday morning, including a 2- or 3-acre blaze near Menear’s Bend east of Sweet Home.

Pettinger said that in some instances, his firefighters would get a fire put out and the electric lines would get charged and start a fire over again.

“Right now, our guys are restocking engines and bedding down for some quick shuteye,” Pettinger said. “Winds are supposed to lessen today. We are also cutting into the woods to get fire watch guys out.”

A Linn County task force including a division supervisor and three firefighters was working at the 500-acre Beachie Creek Fire near Mount Jefferson, according to Albany Fire Department spokeswoman Sandy Roberts.

“We have also sent a mutual aid team to the Lyons area,” Roberts said. “We sent a Type 6 engine and a lieutenant, driver and firefighter.”

One local firefighter from the State Incident Management Team was assisting with the Rainbow Fire on Highway 126 in the McKenzie Ranger District, she added.

Roberts said pertinent fire information is being provided to local residents through the Facebook pages of the city of Albany and Albany Fire Department.

As of mid-morning Tuesday, a couple thousand homes in the mid-valley remained without power.

Tuesday afternoon, Sweet Home was placed under a Level I evacuation plan, which means residents should be prepared to move if conditions worsen. A similar evacuation plan was put in place from the Marcola area north to the Linn County line.

City Manager Ray Towry said there are concerns that if the high winds continued Tuesday evening, the fire burning on the McKenzie Ranger District could make fast progress toward the Sweet Home area.

The thick blanket of smoke and ash sent some mid-valley residents to the Lebanon hospital.

“At Samaritan Lebanon Community Hospital, we are seeing patients due to smoke and respiratory issues,” said Samaritan Health Services spokesman Ian Rollins. “We are also seeing several patients who are coming in to have their oxygen tanks recharged and/or refilled. We have set up a charging station in a conference room at the back of the hospital for these patients.”

Rollins said that neither the Albany nor Corvallis hospitals had seen an influx of patients with smoke-related issues as of late Tuesday.

Fires closed Highway 22 east of Stayton through the Santiam Canyon. A large fire east of Springfield also led to the closure of Highway 126.

As of Tuesday afternoon, Highway 20 between Sweet Home and the Santiam Junction — milepost 33 to 72 — was closed due to fire conditions. The public was asked to avoid the area and watch for firefighting crews.

Oregon Highway 58, the Willamette Highway, was open for travel between the Willamette Valley and Central Oregon. Travelers are asked to exercise extreme caution and to be ready for rapidly changing conditions.

The mid-valley is expected to experience unusually warm weather both Wednesday and Thursday, with highs in the mid- to high 90s, before gradually cooling into the mid-70s by the early part of next week. There is no rain in sight.

• Benton County resident Lu An Carone has offered the use of four fenced pastures on Logsden Ridge for animals being evacuated from Linn County properties. Call 541-760-2767.

The Marion County Sheriff's Office has issued an evacuation notice for the Santiam Canyon from the community of Mehama east to Big Cliff Dam, …

Thick smoke poured into the mid-Willamette Valley from forest fires outside the area on Monday night.

Recreation areas managed by the U.S. Army Corps of Engineers near Foster and Green Peter dams have been closed due to multiple fires burning t…

The Tillamook, Clatsop and Santiam state forests are closed to all public entry and use effective immediately, as are scattered state forestla…

Extreme fire risk in the Pacific Northwest has prompted the Bureau of Land Management to close several sites, including Alsea Falls in Benton …

The Siuslaw National Forest, which includes Marys Peak, other sections of the Coast Range and the central Oregon coast, will close due to fire…

The Holiday Farm Fire, originating in the Lane County community of Rainbow, is now causing the evacuation of Linn communities lying primarily between Brush Creek and the Calapooia River.

Jennifer Steckler walks two horses along Highway 226 in Lyons Tuesday morning. Steckler had walked the animals for more than 2 miles during the mandatory evacuation of North Santiam Canyon communities.

Cassandra Schrunk waits in line shortly before 8 a.m. on Tuesday at a gas station in Scio. Schrunk spent the evening helping evacuate horses from the Hungry Hill area and was on her way to Lyons area to help evacuate more.

A fire vehicle's emergency lights cut through the smoke in Lyons Tuesday morning.