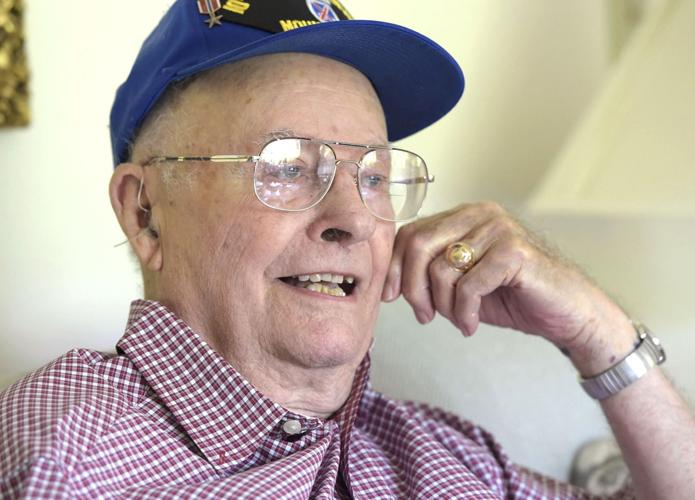 Del Riley served as the Linn County Clerk for 18 years and spearheaded vote-by-mail elections in Oregon. He died Aug. 23 at age 93 at the Edward C. Allworth Veteran's Home in Lebanon. 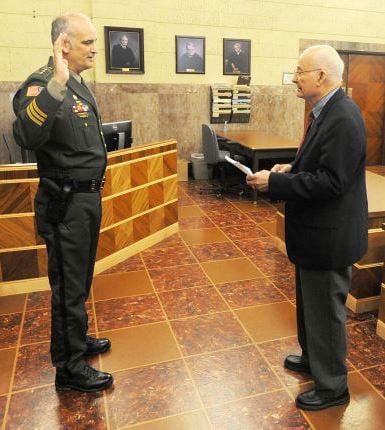 Del Riley, right, administers the oath of office to his son, Bruce Riley, during his 2015 swearing-in ceremony as the Linn County Sheriff. 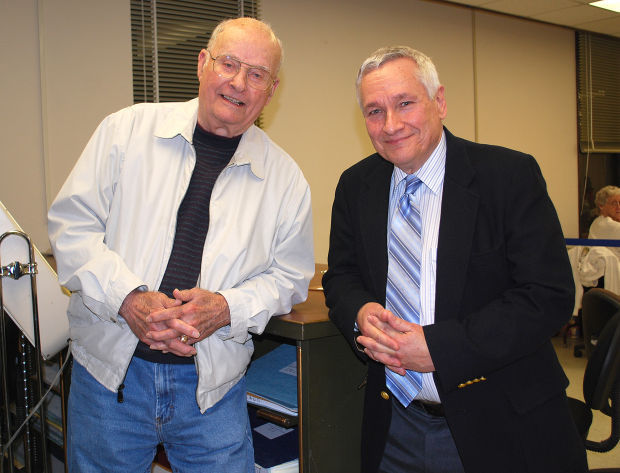 Former Linn County Clerk Del Riley, left, had a positive affect on current Clerk Steve Druckenmiller, first as his boss and then as a friend and mentor. 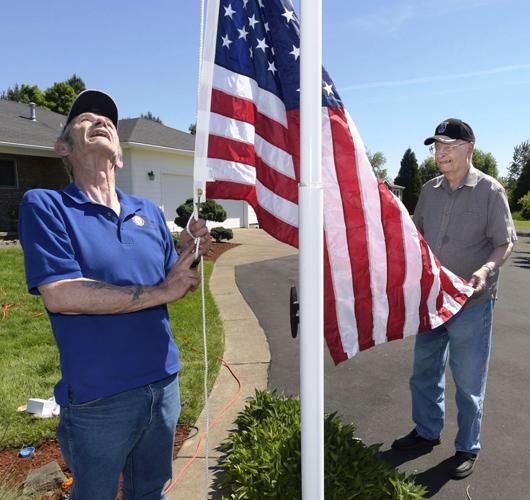 American Legion Post 10 Commander Steve Adams, left, and Del Riley, right, set up a flag pole and flag at the Dorothy Copeland residence in Albany in 2017. 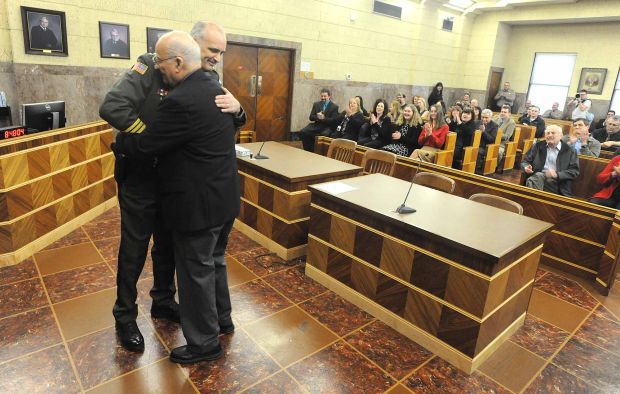 He was a member of "The Greatest Generation," a decorated World War II hero who was injured in battle in Italy. He carried that wound for the rest of his life without complaint.

He also was the father of vote-by-mail elections in Oregon, a trend that could be catching on nationwide.

He was twice named one of Linn County's Distinguished Veterans.

But if asked, the quiet gentleman would say his greatest accomplishment was that he was a Gideon who helped distribute thousands of Bibles throughout the mid-valley.

Riley, 93, died Aug. 23 at the Edward C. Allworth Veterans Home in Lebanon, where he had lived for 16 days.

“If there were more dads like him, there would be a lot less need for jails like I used to run,” said his son, retired Linn County Sheriff Bruce Riley.

Bruce said he and siblings Deleen and Mark believe five words sum up their father’s life: faith, Gideon, vision, service to the community, and family.

“We will talk about how he lived up to each of those words at his service at 11 a.m. Sept. 22 at Willamette Community Church, where our family attended services for more than 50 years,” Bruce Riley said.

Del Riley set the tone for public service among his family. Bruce grew up spending time at the courthouse while his father served as county clerk.

Bruce Riley went on to serve more than 30 years with the Linn County Sheriff’s Office, culminating with two terms as sheriff. His is especially proud that his father administered his oath of office.

Del was present in June when his grandson, Caleb, Bruce’s son, was sworn in as a Linn County deputy. Caleb wears his father’s badge and uses his radio number, “713.”

Roger Nyquist, chairman of the Linn County Board of Commissioners, had much respect for Riley and his commitment to Linn County.

“His leadership, practices and policies are still in place today, 30 years after leaving office,” Nyquist said. “The standard that Del set in Linn County government will be in place for a long time.”

Linn County Clerk Steve Druckenmiller worked for Del for many years and considered him a dear friend.

Druckenmiller called Del's passing a “profound loss to the people who knew him and to our community in general. He was a dear friend and a mentor. My life will never be the same without him.”

Druckenmiller said that Del would drop by his office and “we would always have a wonderful day. It didn’t matter what was going on. We gave each other therapy and then, I would receive emails with further thoughts about what we had been talking about.”

“I got to spend a wonderful two hours with him. It was like nothing was wrong, even though we both knew he was going to pass,” Druckenmiller said. “I know Del is face-to-face with his savior and he’s a happy man.”

Druckenmiller said Riley's pursuit of a vote-by-mail system for Oregon “changed the way elections are held in a profound way. He took a lot of ridicule, but was a visionary and changed the face of elections in Oregon, Washington, Colorado, many counties in Utah and California. This movement is growing nationally and that is thanks to Del.”

Druckenmiller said Riley was “a strong, quiet, gentleman who did profound things.”

“He could regale me for hours with stories. No one could tell a story like him,” Druckenmiller said. “His passing leaves a big, empty hole in my life.”

Del Riley grew up in Montana and Canada and enlisted in the U.S. Army in 1943. He was assigned to the 10th Mountain Division and trained at Camp Hale in Colorado for a year preparing to attack the rugged Alps in northern Italy.

His company arrived in Naples, Italy, on Jan. 13, 1945, aboard the USS West Point, outrunning a submarine during their trip.

Riley was severely wounded by shrapnel from land mines laid by heavily fortified German troops. He developed a medical condition that he would have to treat daily for the rest of his life.

He was shipped home about the USS Shamrock on St. Patrick’s Day, 1945. He was one of only two white soldiers surrounded by African-American soldiers of the Buffalo Division.

“I didn’t know what to do at first, but after several hours of being quiet, one of the guys hit me and said I was all right," Riley said in a 2014 interview. “We spent 19 days laughing. Those guys had the greatest stories to tell.”

He was discharged from service in October 1945 and returned to Silverton, where he got a job in office equipment sales.

He married his wife, Patricia, in 1952 and the young couple moved to Albany in 1953. They had three children, Bruce, of Tangent; Deleen, of Salem; and Mark of Vancouver, Washington.

Riley continued to work in office equipment sales and took business school classes at night on the GI Bill. He ran for the Linn County Clerk’s position in November 1966, was elected and took office in January 1967. He held the position for 18 years.

In addition to his volunteer work with the Gideons, Riley enjoyed traveling and wood carving.

In 2013, Riley was accompanied by his grandson, Brent, on an Honor Flight to Washington, D.C. Brent also is a veteran who served two tours of duty in Iraq.

Riley and his wife lived at the Mennonite Village for 18 years.

California authorities say an abducted 15-year-old girl and her father — a fugitive wanted in the death of the teen’s mother — were killed in a shootout with law enforcement.

Clergy in 33 states are exempt from laws requiring professionals such as teachers, physicians and psychotherapists to report information about alleged child abuse to police or child welfare officials.

Biden asks if congresswoman who died in crash is at conference

President Joe Biden on Wednesday asked if Indiana GOP Rep. Jackie Walorski, who died in August, was present at a White House conference.

Things to know today: 7 children among dead in school shooting in Russia; Ian is now a hurricane aimed at Florida; scores, highlights from NFL's Week 3.

At least 6 people wounded in shooting at school in Oakland

Ukraine counteroffensive: Slow advances near the eastern hub of Lyman

Del Riley served as the Linn County Clerk for 18 years and spearheaded vote-by-mail elections in Oregon. He died Aug. 23 at age 93 at the Edward C. Allworth Veteran's Home in Lebanon.

Del Riley, right, administers the oath of office to his son, Bruce Riley, during his 2015 swearing-in ceremony as the Linn County Sheriff.

Former Linn County Clerk Del Riley, left, had a positive affect on current Clerk Steve Druckenmiller, first as his boss and then as a friend and mentor.

American Legion Post 10 Commander Steve Adams, left, and Del Riley, right, set up a flag pole and flag at the Dorothy Copeland residence in Albany in 2017.