A burned-out Idanha-Detroit Rural Fire Protection District engine sits on the street in Detroit on Friday. The fire station, City Hall and sheriff's substation were all destroyed when the Lionshead Fire overran the rural Marion County community on Wednesday. See our website for more photos and video from the fire zone. 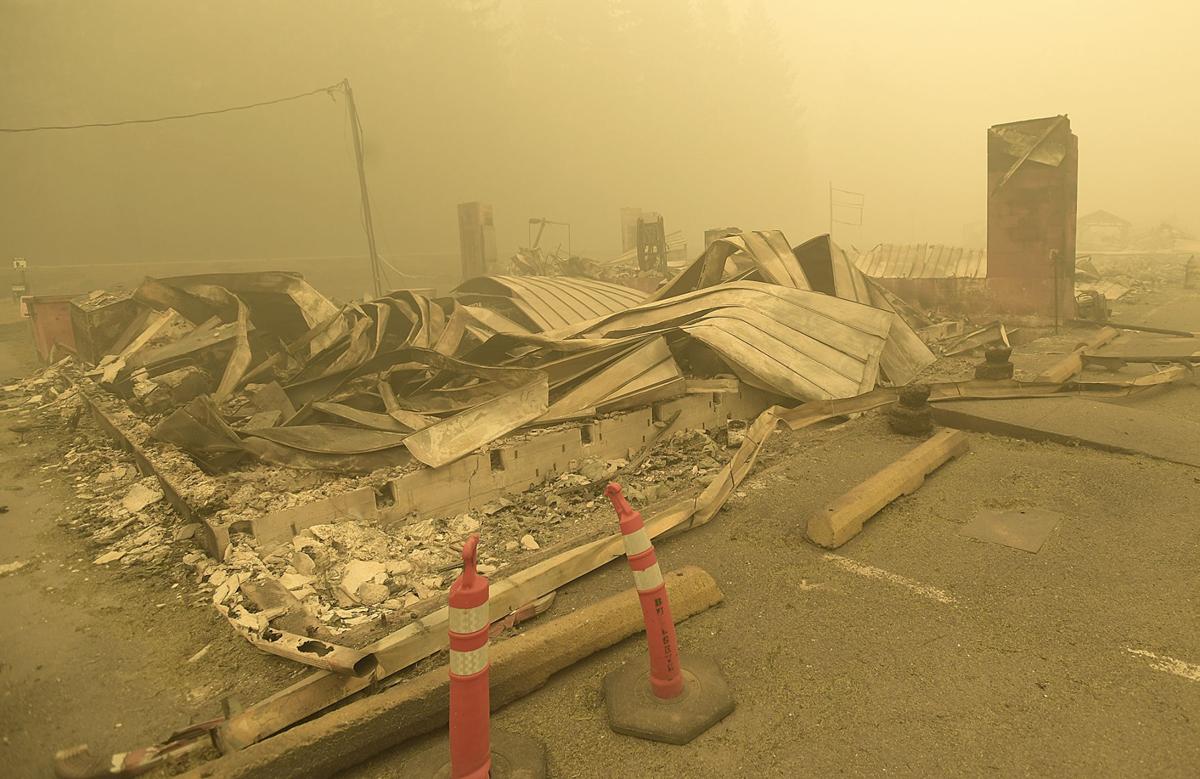 Here are the remains of the Marion County Sheriff's Office substation and Detroit City Hall as seen Friday. 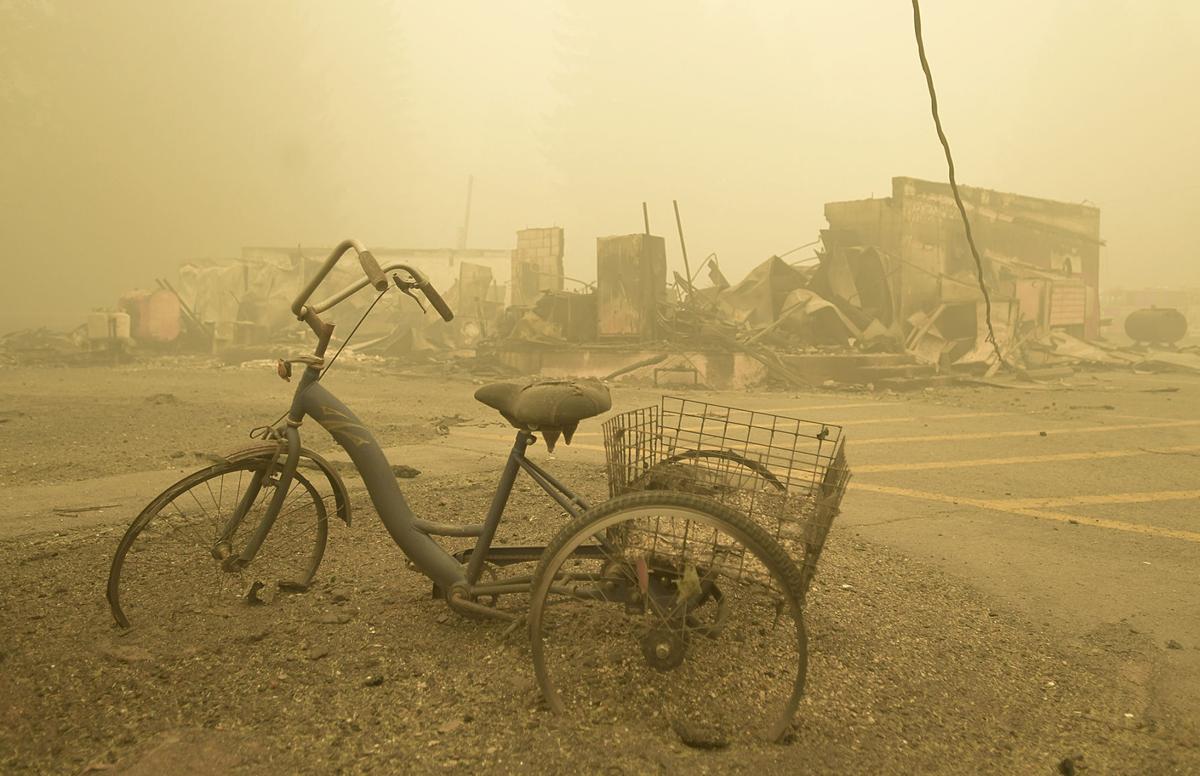 A trike that was on display for a memorial on Detroit Avenue still stands near the Detroit Market. 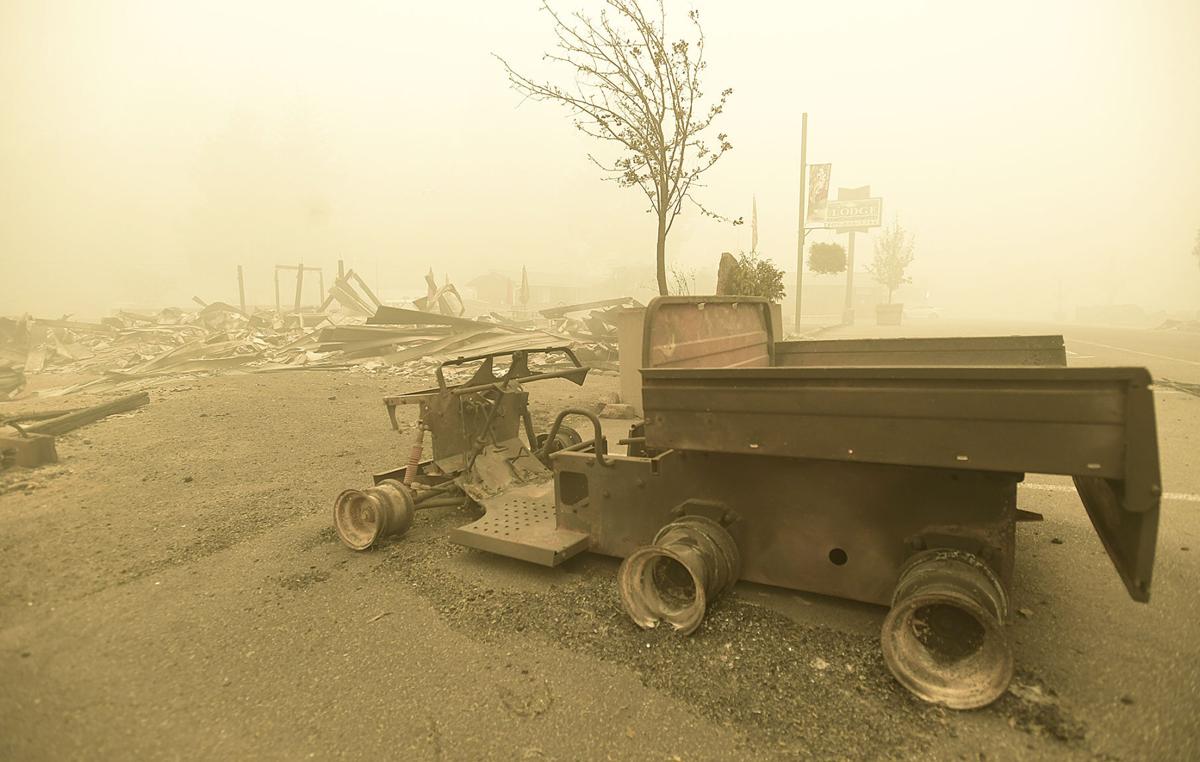 Here is a look at a burned vehicle near The Lodge at Detroit Lake. 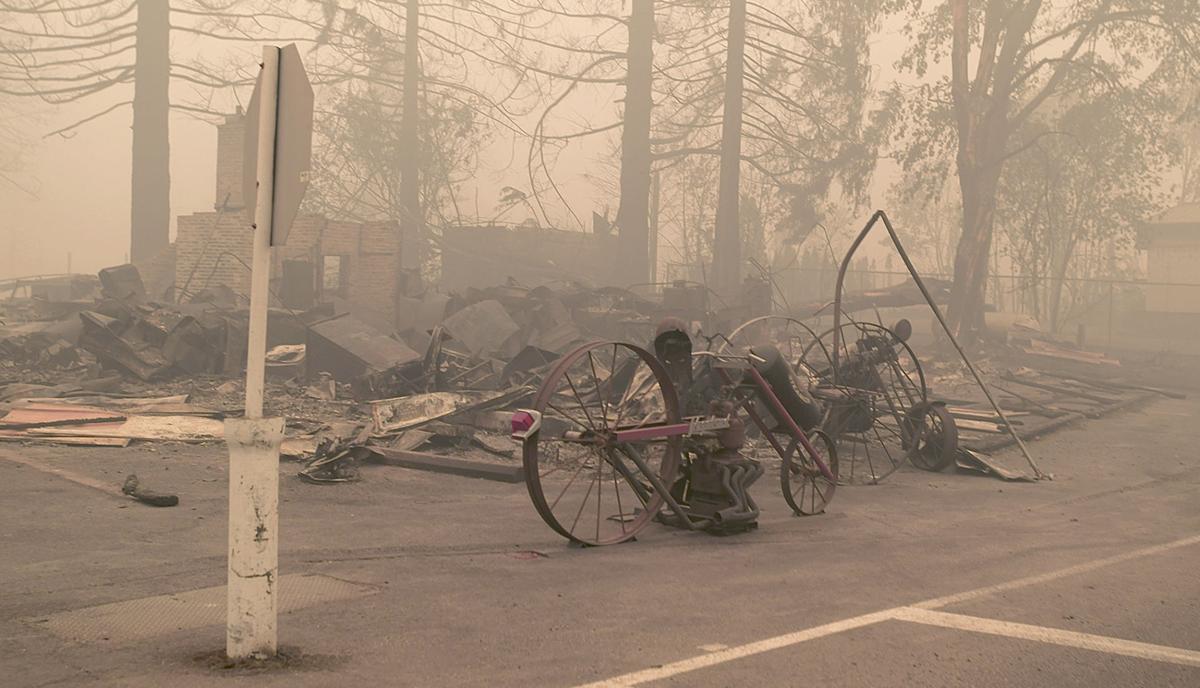 Here is a look at the remains of the Korner Post Restaurant and Steel Wheels Lounge, with some of its well-known vehicle sculptures visible in the foreground. 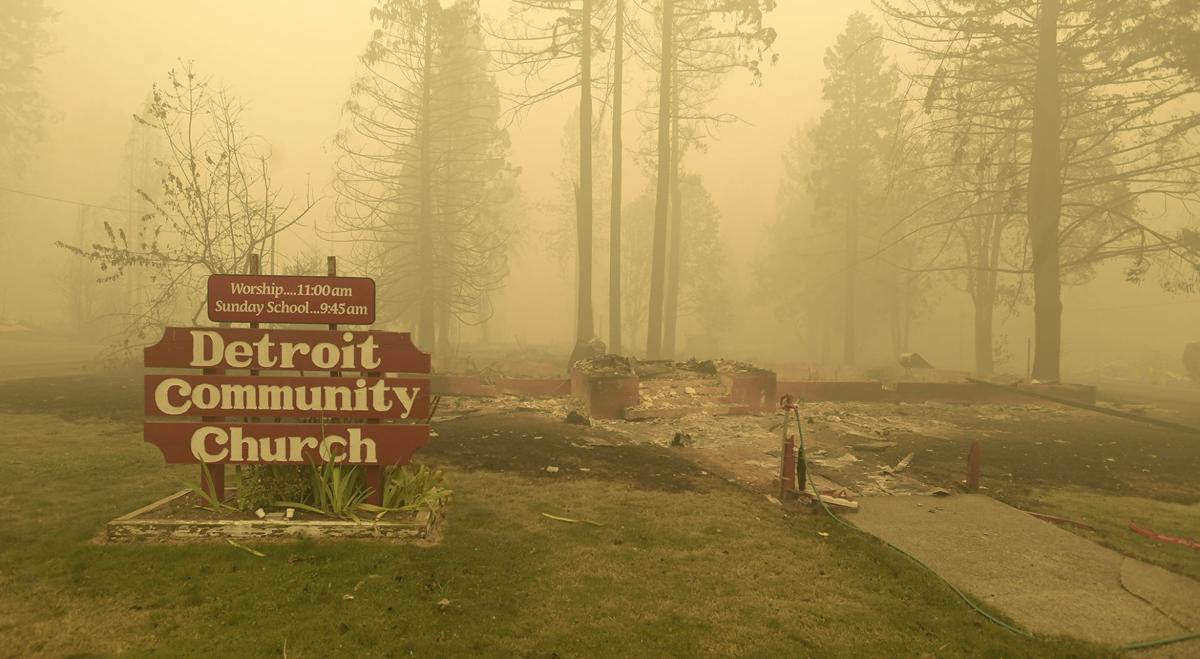 Only the sign remains in front of the Detroit Community Church.

DETROIT — It would be accurate, but a bit sensationalized, to use words such as  like "inferno" or "conflagration" to describe the devastating wind-whipped wildfire that destroyed virtually every building in the rural Marion County community of Detroit, population 265, Wednesday morning.

Mayor Jim Trett described it simply as "the worst fire I have ever seen.”

And Trett knows about bad fires.

He spent 35 years as a firefighter in Keizer. He has lived in Detroit since 2004 and has been mayor of the lakeside town for about 4½ years.

“It was much like the Camp Fire in Paradise, California, two years ago that wiped out everything,” Trett said in an interview with the Democrat-Herald on Saturday. “We have three canyons that merge together to create a funnel.”

This year's Oregon wildfires have claimed four lives so far in the Lyons area and eight statewide, although more people remain missing and unaccounted for and the death toll could rise.

Detroit's community store — the Mountain High Grocery — and the Post Office remain standing, as do a few houses and storage buildings, but nearly all other buildings have been leveled.

All that remains of City Hall and the Marion County Sheriff’s Office substation are concrete foundations and twisted metal roofing.

A sign welcoming families to the Detroit Community Church — worship service at 11 a.m., Sunday School at 9:45 — remains standing. But the only thing left of the church itself are its brick steps.

Parts of the walls of the Lake Detroit Market and Korner Post Restaurant are still upright, as are some metal street signs.

Only charred metal remains of vehicles caught in the blaze — including a fire truck. Tires, window glass and interiors are nonexistent.

Trett’s home was spared, and his dog Dre — yes, like Dr. Dre — a pit bull/Lab mix, is unharmed.

“My house is standing and some houses across the street are still there, but all of the houses behind me are gone,” Trett said.

Residents have not been allowed back into the community since evacuating late Tuesday, but Trett hopes to be able to go in on Sunday.

Trett said the Lionshead Fire sneaked up on the community.

Trett said he and other city officials had been monitoring the Beachie Creek Fire, which started from unknown causes on Aug. 16 in the nearby Opal Creek Wilderness Area.

U.S. Forest Service teams had been dumping water on the fire from the air, but because it was in a roadless area, they were unable to attack it with heavy ground equipment.

But 60- to 80- mile per hour winds starting late Monday and continuing into Tuesday whipped the flames into a frenzy, and the fire grew quickly from about 450 acres to what is now 187,000 acres.

While the Beachie Creek Fire damaged nearby Gates, Mill City, Lyons and Mehama, Trett said it was the Lionshead Fire that slammed Detroit, taking residents by surprise.

The Lionshead Fire, which also started on Aug. 16, was initially much farther away, originating about 20 miles west of Warm Springs on the east side of the Cascade crest.

The harsh east winds quickly drove the Lionshead Fire over the Cascades and into Detroit.

Trett said he was notified of potential fire issues on Monday evening.

He was in Keizer on business Tuesday morning. But that evening, after he returned home, things began to get serious.

“He told me they could see the fire coming down French Creek,” Trett said. “We were told to head east toward Bend. Then the highway got clogged up with downed trees and rocks. People were on both sides of the hill trying to figure out what to do. Many people met at the park and ride area near Stayton.”

He called the evacuation “frantic.”

Trett said the Lionshead Fire “blew up" in the Breitenbush Canyon just above Detroit. It hit the town on Wednesday morning, just hours after the community had been evacuated.

"The Lionshead Fire came through our back door and hit us hard,” Trett said.

The Beachie Creek Fire, meanwhile, spread southward and severely damaged the communities of Mill City, Gates, Lyons and Mehama, just to the west of Detroit.

Residents of Mill City and Gates “were petrified," Trett said. "One man who has fought forest fires for decades said he had never been as scared as he was then.”

Detroit's power lines are all down, and reports of what buildings remain are sketchy, according to the mayor.

“I’ve been told one part of our water plant is OK, but I don’t know which part that is,” Trett said. “I hope to get there Sunday along with a water tech so we can assess what’s there.”

Trett said some people are listed as missing, but it’s difficult to tell if someone has perished or is alive and just got separated from others during the confusion of evacuating in the middle of the night.

Trett and Dre are staying in Keizer. He is spending a lot of time at the incident command center set up at Chemeketa Community College.

Trett said it is important that he and other city officials get back into the community to begin assessing what’s left to build upon.

“We need to begin letting people know what’s going on,” Trett said. “We need to do what we can to take care of our people. We have met with Marion County commissioners, talked with federal elected officials and we understand the governor is forming a task force.”

Trett said the question is not whether the community will rebuild. “It’s when do we start? Because we are going to rebuild. We have had some infrastructure needs and plans for a while. This may be the time we implement those plans.”

As of Saturday, the Lionshead Fire had grown to nearly 139,000 acres and was only 5% contained. Nearly 1,500 people were working the fire, along with 11 helicopters, 66 engines 10 bulldozers and other equipment.

But favorable weather conditions are in the forecast, including rain starting Monday evening.

Milt Moran is president of Cascade Timber Consulting in Sweet Home and chairman of the Oregon Forest Protective Association.

He has devoted 47 years to the timber industry and wildland firefighting and said he has never seen a series of fires on the west side of the Cascades like this.

“Thursday was the first day in my life that I never saw the sun,” Moran said of the thick smoke and ash that blanketed the mid-valley. "This is crazy stuff.”

There are 12 forest protective associations in Oregon. Private timberland owners pay a per-acre assessment to buy equipment and fund summer firefighting crews based at the various Oregon Department of Forestry offices statewide.

“These fires have destroyed many, many homes and businesses,” Moran said. “The fires that destroyed Detroit could just as easily happened in Sweet Home. The conditions were the same.

Moran said firefighting resources are stretched thin because there are so many fires in other states.

“We have had dry conditions and east winds many times before, but in this case, there was already a fire that was being held in the wilderness, and then we got those very high winds. Trees are in full crown right now, and there are still lots of leaves which weighed branches down. Once they get on fire, they become a full sail and then break off and fly.”

Moran praised the work of the Oregon Department of Forestry and U.S. Forest Service but said elected officials need to take information about the need for increased firefighting funds more seriously.

“We know what we’re talking about,” Moran said. “Oregon’s private timberland owners contribute more per acre toward firefighting than those in other states.”

A2: A roundup of Western wildfires

A5: An update and map of mid-valley fires

A10: Evacuation orders and other odds and ends

See the website for a series of videos and photo galleries from the Santiam Canyon fires.

Gallery: Detroit and the Santiam Canyon after the fire

A burned-out Idanha-Detroit Rural Fire Protection District engine sits on the street in Detroit on Friday. The fire station, City Hall and sheriff's substation were all destroyed when the Lionshead Fire overran the rural Marion County community on Wednesday. See our website for more photos and video from the fire zone.

Here are the remains of the Marion County Sheriff's Office substation and Detroit City Hall as seen Friday.

A trike that was on display for a memorial on Detroit Avenue still stands near the Detroit Market.

Here is a look at a burned vehicle near The Lodge at Detroit Lake.

Here is a look at the remains of the Korner Post Restaurant and Steel Wheels Lounge, with some of its well-known vehicle sculptures visible in the foreground.

Only the sign remains in front of the Detroit Community Church. 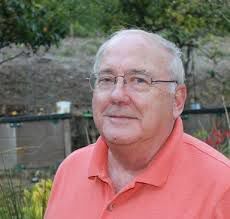