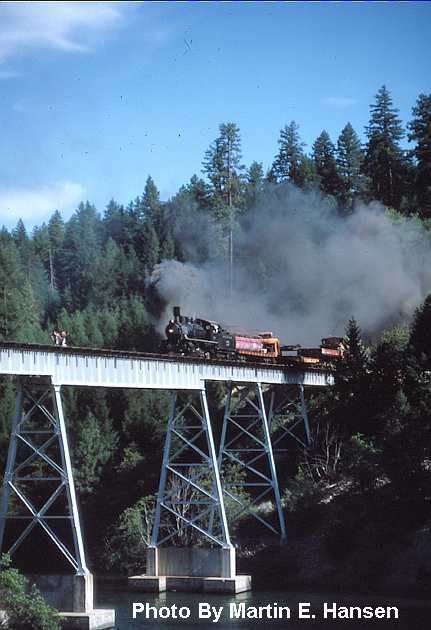 Stunt doubles run across the Lake Britton Bridge in northern California, as the McCloud Railway steam locomotive #25 bears down in a scene from the movie, "Stand By Me." 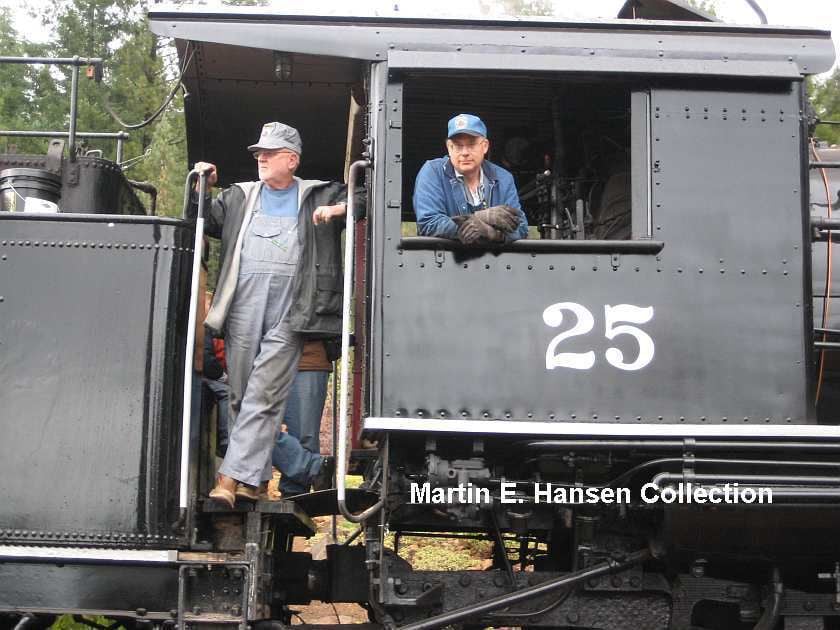 BROWNSVILLE — Although he’s an attorney by trade, Martin Hansen was born with railroading in his blood.

His great-grandfather was a locomotive engineer who died running a steam train when it was hit by an avalanche in Colorado in the early 1900s.

Hansen, who lives in Bend, served as the fireman on the McCloud Railway steam locomotive No. 25 featured in the movie, “Stand by Me.”

Although he was born and reared in San Francisco, Hansen, whose family is all from Oregon, said he was always an Oregonian at heart. His parents met at Oregon State, and many family members are loggers who live on the Oregon coast.

Hansen began photographing old locomotives in the 1960s, and that grew into him chartering vintage steam train trips for groups of other photographers.

“Soon, I was asked to help work on the old steam trains that I was chartering and I learned how to weld, cast and operate them,” he said.

After law school, and with his interest in old trains growing, Hansen began representing various railroads around the West and also acting as intermediary for the sale of dozens of vintage steam locomotives over the years.

“I’ve helped sell the steam locomotive used in "Stand by Me" three times,” Hansen said. “I’ve probably bought and sold over 45 steam locomotives for clients. I am also asked to appraise them from time to time.”

Hansen said a refurbished locomotive like the "Stand by Me" engine will fetch upwards of $500,000.

He said the "Stand by Me" locomotive was built in 1925 by the American Locomotive Company (Alco) in Schenectady, N.Y.

“Most of the big locomotive factories were in the east,” Hansen said.

The McCloud engine was a workhorse that ran logging trains around the logging camps in the Mount Shasta area of California. It was used full-time until the mid-1950s, when it was finally replaced by diesel powered locomotives.

Rather than scrapping it, as was the fate of most retired steam locomotives, McCloud No. 25 was kept in reserve by the McCloud River Railroad and was used for excursion trips on and off for the next several years until the late 1970’s.

“In 1982, a friend of mine approached the McCloud River Railroad and asked them for the chance to refurbish the engine to resume operating some excursions on the railroad,”  Hansen said. “When the railroad was offered the "Stand by Me" movie deal, my friend asked if I wanted to help him with the movie shoot and run the engine.”

Hansen said he took a week off work and traveled to the rural area near Burney, California, in the Mt. Shasta area. He said the filming took place in September and the weather was “very warm and sunny, an Indian Summer.”

“The movie company had set up a huge tent city at one end of the railroad trestle used in the filming,” Hansen said. “I can’t believe that mass of tents and trailers doesn’t show up in the movie. It was before computer imaging, so I don’t know how they did it.”

Hansen said he really didn’t know much about the movie, other than at the time it was being called, “The Body.”  That was the name of the Stephen King book that the movie is based on.

“It took a solid week to shoot just the one scene of us chasing the kids off the trestle.  We probably ran the train over the trestle three dozen times during that week,” Hansen said. “Director Rob Reiner kept asking us to go faster, but there comes a point with the increased speed where the train starts to lean into the curve at the end of the trestle and that’s not a good feeling.”

Hansen said the filming came about a year after actor Vic Morrow and two child actors were killed while filming "The Twilight Zone" movie, so director Rob Reiner was especially careful with the young actors.

“The young actors could not do the stunt work on the trestle when the train was on the trestle, so they actually had four short women,” Hansen said. “They were dressed like the boys and they had their hair cropped short.”

Hansen said that while director Reiner was meeting with us on the train crew and telling us to run the train faster, he was then separately telling the actors to wait longer before starting to run, which Hansen said was not a good mixture.

“There comes a point where you can’t see what’s directly in front of the locomotive when those objects are so close to the front of the engine.” Hansen said. “There were a couple times that as soon as we passed the movie cameras the engineer and I would quickly and look back to make sure the actors had gotten off the bridge safely.”

Hansen said plywood planks had been laid down between the rails for the actors to run on. Since they were not nailed down it would have been easy for one of the actors to have tripped over one of the edges of the planks as they bounced up causing them to fall in the path of the train bearing down on them.  In addition, the trestle is over 80 feet above water.

He said Reiner once insisted on placing a camera with an expensive new lens between the rails, when usually a mirror is used so the camera can be placed outside harm’s way.

A crew member was supposed to grab the camera at the last minute before the train hit it, but Hansen said the crew member panicked with the engine bearing down on him and froze.

“Sure enough, we smashed that camera and lens into a thousand pieces,” Hansen said.

Hansen said he has driven trains for commercials and has been involved in a couple of other movies, including “Glory Bound,” about folk singer Woody Guthrie.

There is a lot of down time in the movie industry while various camera mounts and equipment were rigged and taken down during the weeklong shooting.

He added that the LakeBrittonBridge is about 50 miles from the railroad maintenance shops, so fuel and water had to be trucked to the site daily. The bridge still spans Lake Britton reservoir.

“I remember having lunch with Rob Reiner a couple times and he was very nice to visit with,” Hansen said. “He said we could have anything we wanted from the cooks at the canteen and I said, “Anything? How about Beef Wellington? Reiner passed the order on to the cook and that’s what we had for lunch.”  “Reiner was always intrigued to meet this lawyer who operates steam locomotives” Hansen said.

Hansen said he didn’t see the completed movie until several years after it had been released, but says it has stood the test of time well.

He said it’s interesting that the other railroad scenes were filmed near Cottage Grove, with the backdrop of Douglas fir trees and the Willamette Valley farm lands while the bridge scene was shot in Northern California, where pine trees were prominent.

Hansen remains active with a number of Northwest Railroads that operate steam locomotives, including a railroad line in Prineville that has a steam engine that Hansen regularly operates, Hansen also keeps in contact with the "Stand by Me" engine. old McCloud No. 25.

The movie engine is now owned by the Oregon Coast Scenic Railroad that operates out of Garibaldi on the Oregon coast.

“I plan to attend the movie anniversary event in Brownsville on Saturday and then head up to Garibaldi and run the train on Sunday,” Hansen said.

"Stand by Me" fans can still see the trestle from the movie even though the rails over it were removed a few years ago. In 2012, the Great Shasta Rail Trail was founded and visitors can now hike the McCloud Railroad grade all the way out to the famous trestle.

BROWNSVILLE — For a movie that’s about a dead body, “Stand by Me” has shown a lot of life over the last 30 years.

These photos were taken by the Democrat-Herald during the filming of Stand by Me on Main Street of Brownsville, in July of 1985 - they were ne…

Stunt doubles run across the Lake Britton Bridge in northern California, as the McCloud Railway steam locomotive #25 bears down in a scene from the movie, "Stand By Me."