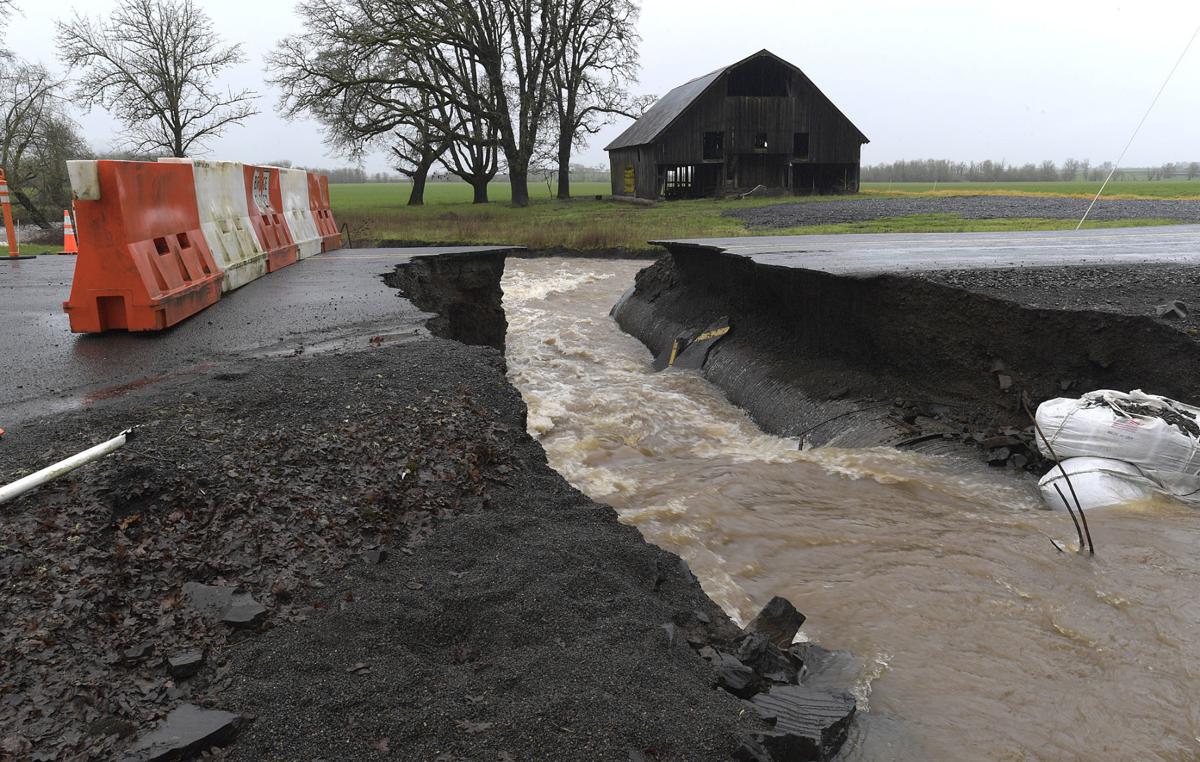 Butte Creek carved a channel through Brownsville Road just north of the Middle Ridge Road intersection. Linn County Road will be closed until repairs can be made. 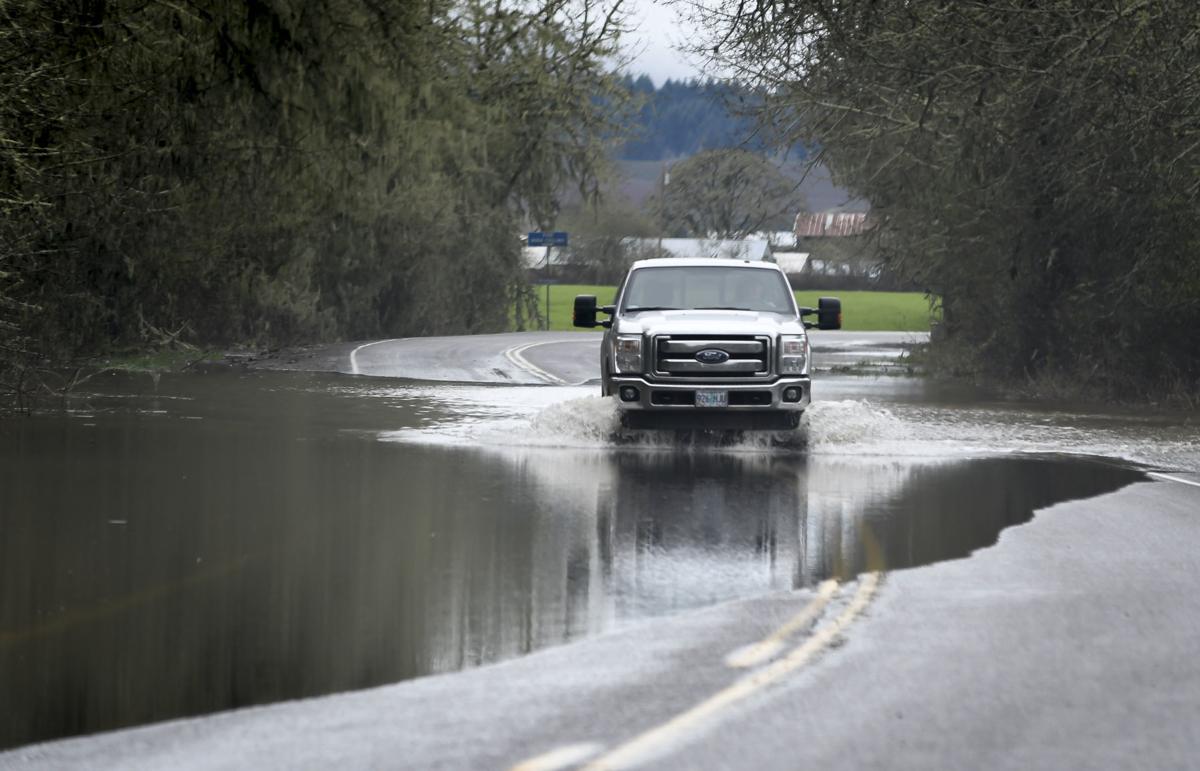 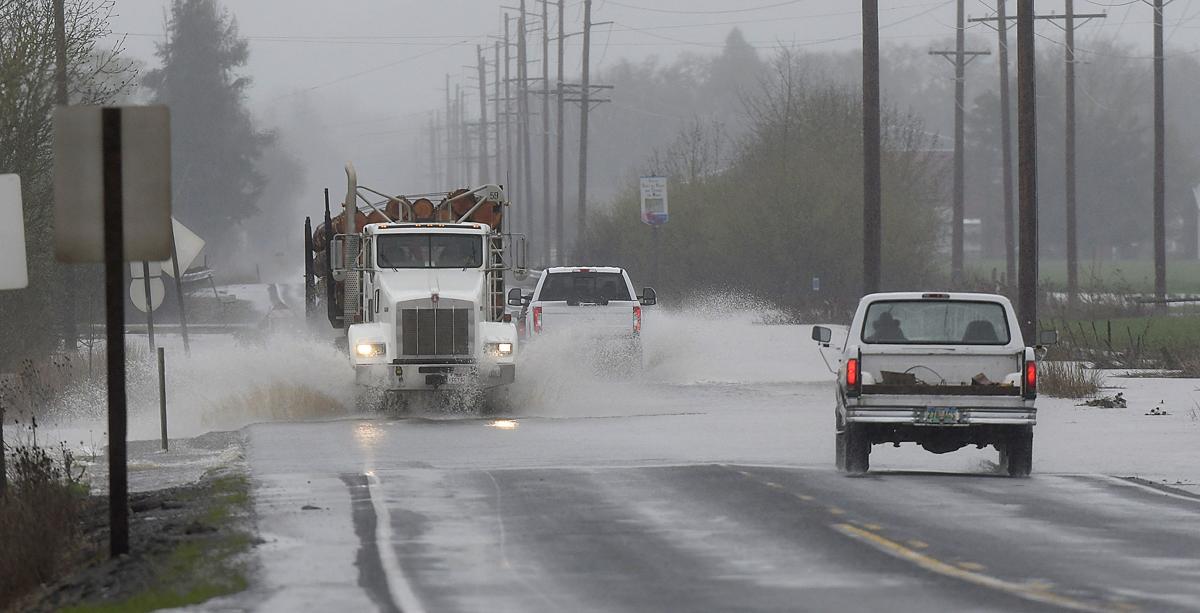 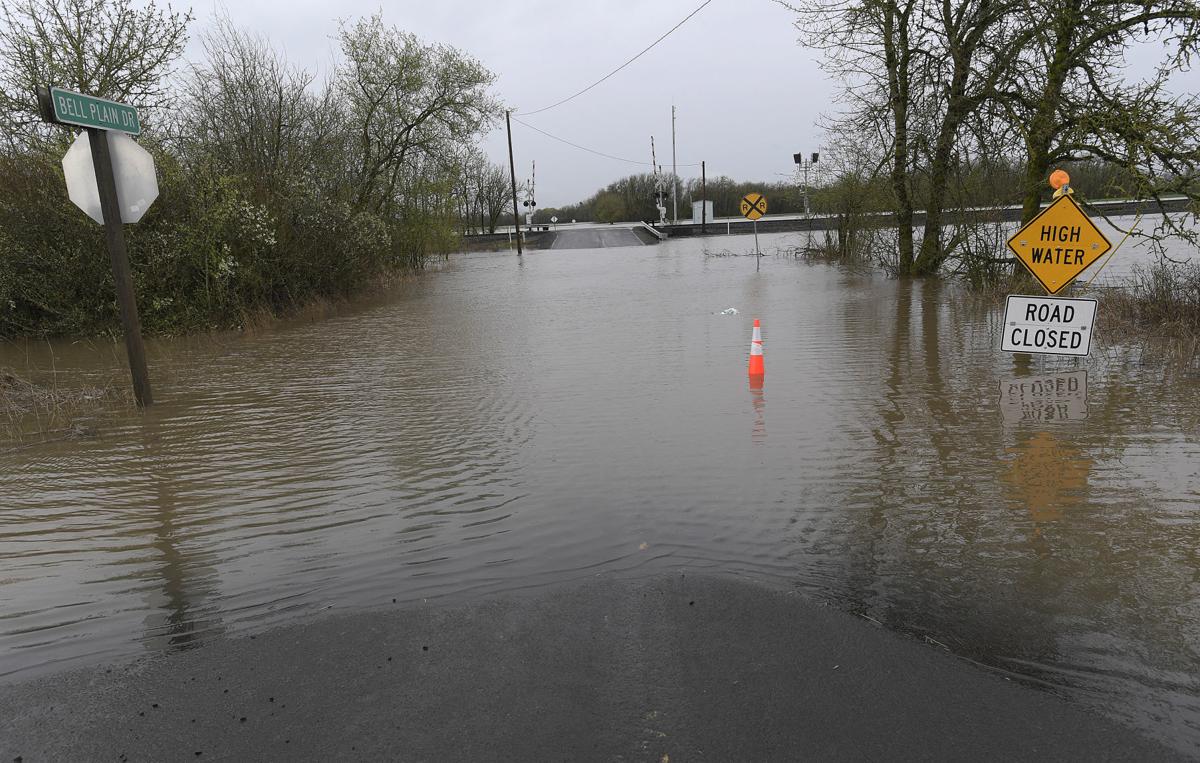 Bell Plain Road between the Railroad tracks and Highway 99E is closed due to flooding. 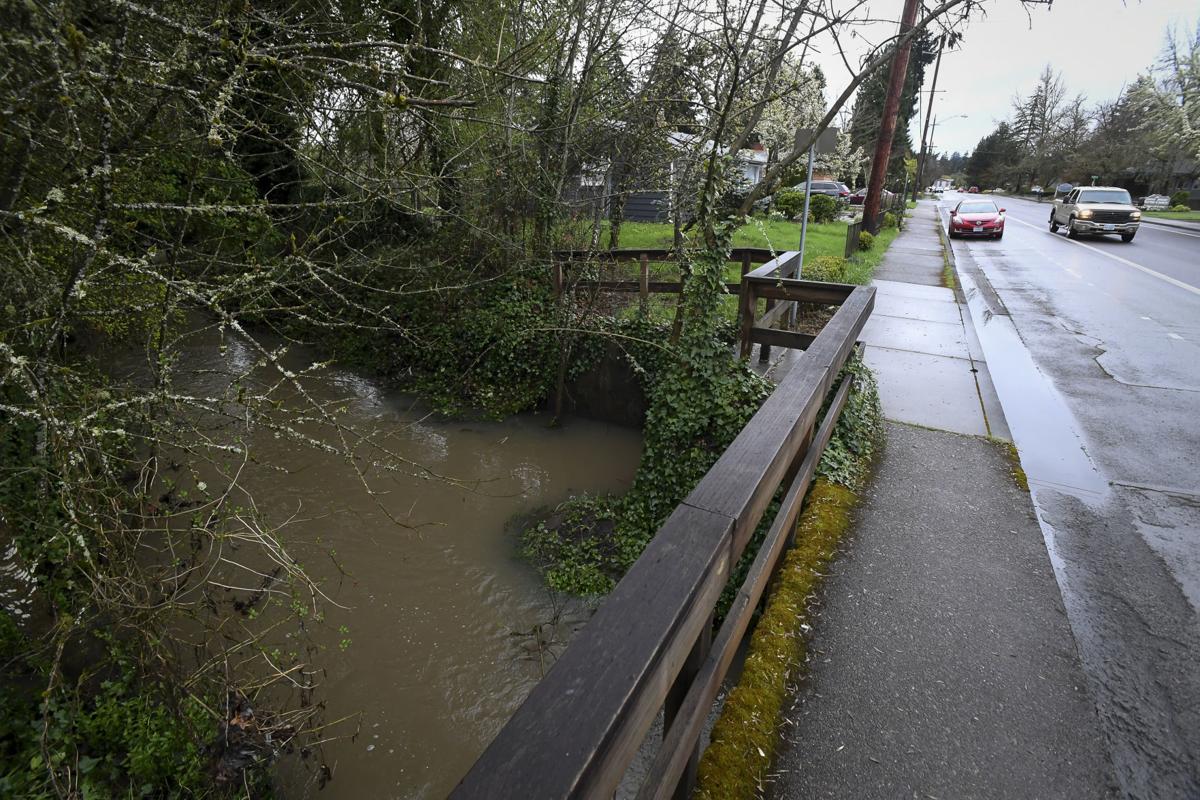 Dixon Creek where it passes under NW Grant Avenue in Corvallis on Monday Morning. 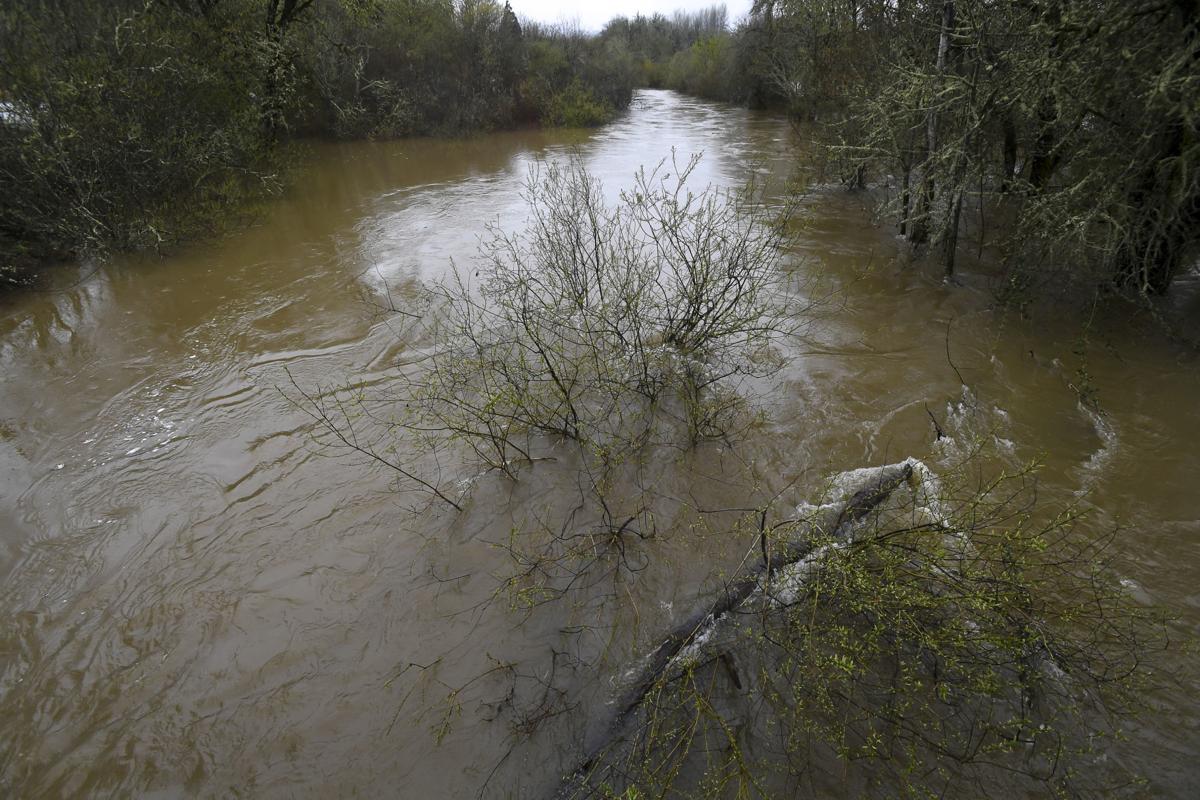 High water in the Marys River at the Fern Road bridge in Philomath Monday morning. 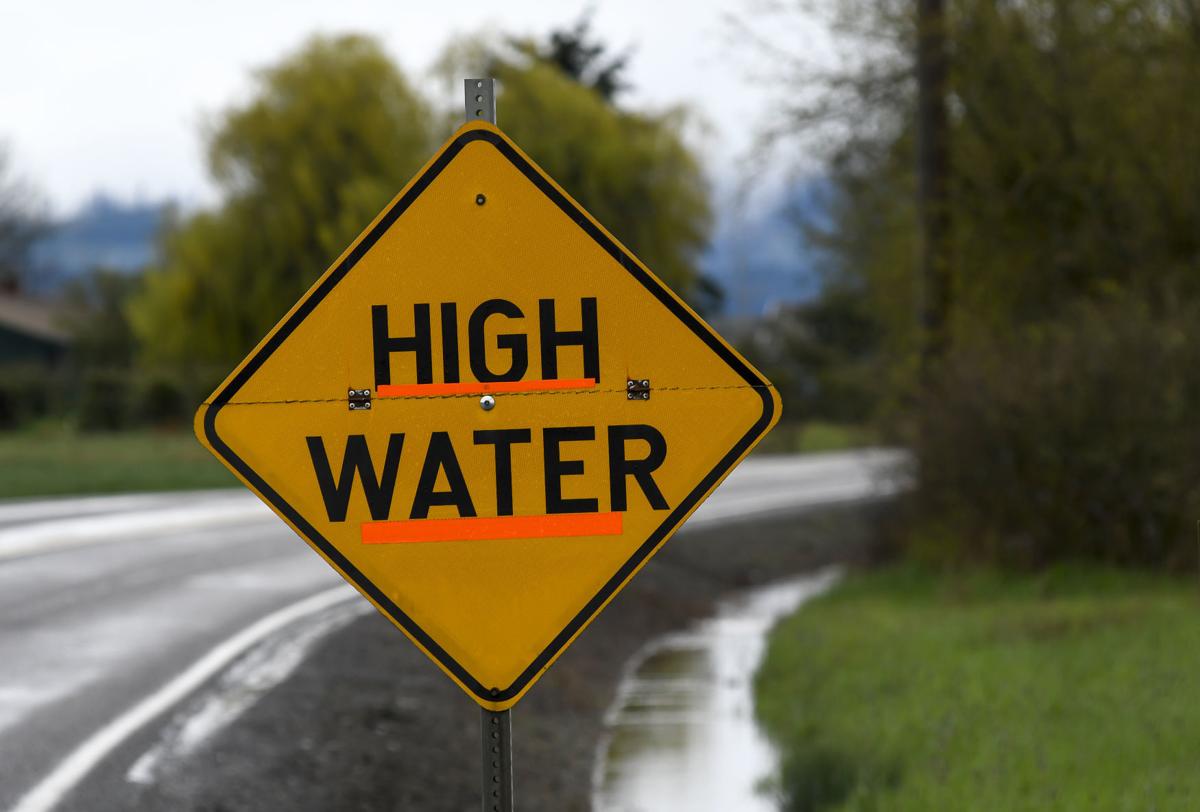 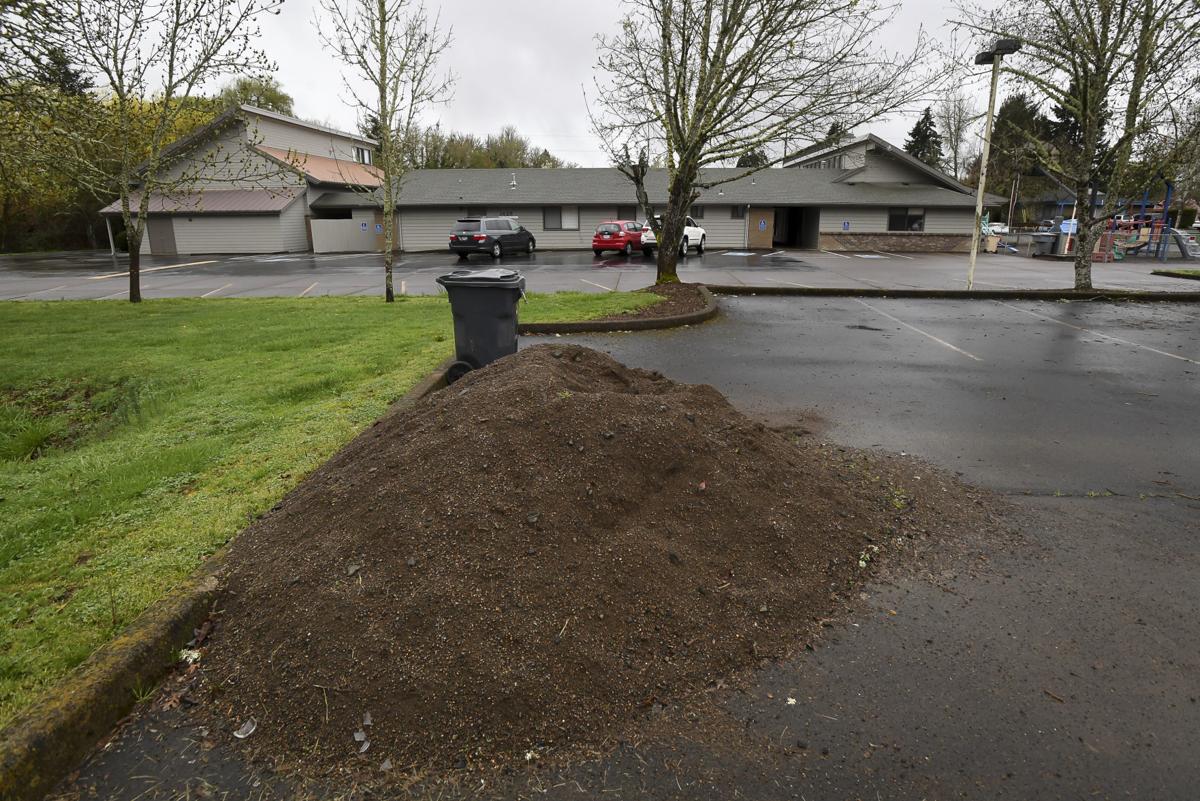 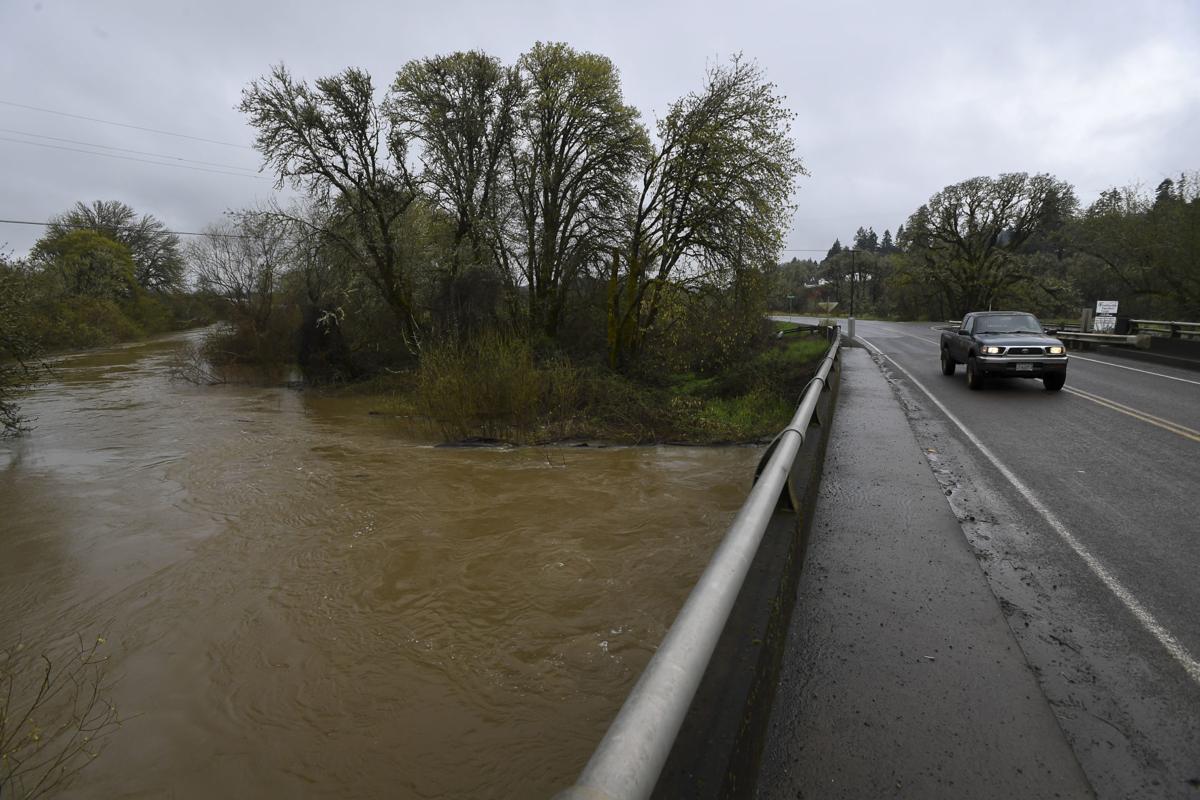 The Marys River flowing under the bridge on Fern Road in Philomath on Monday Morning.

We’re not saying the mid-valley has gotten a lot of rain in recent days — reports of ark building and cows and sheep lining up two-by-two may be an exaggeration — but about 5 inches has fallen since last Monday, causing some localized flooding and a few road closures.

And it doesn’t look like the rain is going away for most of this week, although things may dry out a bit Friday, when there is only a 10 percent chance of precipitation.

A week ago, the Corps of Engineers warned the public that its 13 dams in the Willamette Valley were experiencing a lack of water, but that has changed markedly to the point that area reservoirs are expected to reach full operating capacity this week.

Monday morning, the Corps began releasing more water from its dams because of the influx of rain and melting snow.

“We are managing flows in a way to protect the downstream public from flood to the extent we are able, and to maintain space in the reservoirs to avoid uncontrollable releases,” said Ross Hiner, the Portland District’s Dam Safety program manager. “However, inflows are so high that we are having to increase our releases to minimize the overall flooding risk.”

Corps staff members are running forecasting models several times per day in conjunction with the Northwest River Forecast Center. The public can review that data at https://www.nwrfc.noaa.gov/rfc/.

Here's a rundown of other high-water issues throughout the mid-valley:

Numerous Linn County roads have been closed due to high water, according to Roadmaster Darrin Lane.

“Things are holding together pretty well, but we have had a lot of water,” Lane said. “It’s interesting that we are seeing some localized flooding in areas we don’t usually see it.”

Lane said a large culvert blew out on Brownsville Road between Middle Ridge and Rock Hill Road and water has breached the broken dam on Thomas Creek.

“I was on call Sunday and we didn’t hear anything about flooding in Scio, which is unusual,” Lane said. “I’m guessing we’re going to have some shoulder repairs to make after this, but at this point we don’t have a lot of damage.”

Lane said there was a small mudslide Sunday afternoon on Upper Calapooia Drive, about four miles east of the Highway 228 junction.

A complete list of road closures and warnings can be found on the Linn County Road Department website at http://www.co.linn.or.us/Roads/roads.asp.

In Albany, Bryant and Takena Landing parks were closed in Albany due to high water. City staff said water in those areas is expected to continue to rise.

Lochner Road and Oak Creek is also closed and the city is providing sand for sandbags at the following locations:

According to the city, urgent news regarding flooding will also be funneled to the Nixle alert system. Residents can sign up for Nixle by texting 97321 to 888-777.

“The Santiam River and Ames Creek are full,” he said. “The stormwater system is near capacity but so far, we’re OK. We’ll have to see what Mother Nature brings down on us.”

Sand bags are available in Sweet Home at the site of the future city hall, 3225 Main St., and across from the library at the corner of 13th Street and Kalmia Street.

Ron Whitlatch, engineer services director for the city of Lebanon, said there were no roads closed within city limits but there was water on county-owned Vaughn Road.

“We’re doing pretty good,” he said. “Anything could happen but we don’t expect to see closed roads. The worst of it is probably over.”

According to a statement from the Public Works Department, when the ground becomes saturated, groundwater enters the sanitary sewer system through cracks and holes in the pipes, in addition to footing drains, and other sources of extraneous water from private property.

When this occurs, the ability of the sewer system to transport sewage to the wastewater treatment plant is exceeded and the system becomes surcharged. When these conditions become severe enough, the level within the plant's influent pump station surcharges, then overflows to Ames Creek.

Signs warning people to avoid contact with the water in Ames Creek and South Santiam River due to potentially higher levels of bacteria were posted early Sunday.

The signs will be removed once the bacteria levels return to normal.

As of 10 a.m. Monday, no Benton County roads had been closed due to high water.

“Typically, we get flooding in south county, but at this point, it’s not as bad over here,” Stockhoff said. “We’re hanging in there and we haven’t heard of any road closures.”

Jim Stouder, road manager with the Benton County Public Works Department, said there was some light flooding in the southern part of the county, where Muddy Creek was spilling over its banks in places.

With the Willamette and Long Tom rivers due to crest on Tuesday, Stouder said high water could be an issue in low-lying areas of southern Benton County, including Old River Road.

“It might be interesting when the Willamette peaks (Tuesday),” he said. “We might have to close a road or two.”

“So far the river hasn’t come over its banks,” he said.

“There’s a lot of water coming off the hills and coming through the system, but so far we’re doing OK.”

Philomath officials had been worried about possible flooding in low-lying areas along the Marys, but that river appeared to be staying well below flood stage.

“We’re looking at it, but it’s still quite a ways under cresting.”

Residents were asked to lend a hand by helping to clear clogged storm drains but were also warned not to remove storm drain covers or grates.

Clogged drains that can’t be easily cleared should be reported to the Corvallis Public Works Department at 541-766-6916.

The city also stockpiled do-it-yourself sandbag-filling stations at several locations around town. Sand and bags are available, but residents will need to bring their own shovels and plenty of elbow grease to fill the bags.

Sandbag-filling stations are located at:

In Corvallis, Crystal Lake Sports Fields including the main parking lot and the Willamette Boat Ramp are closed due to high water.  The facilities are anticipated to remain closed until mid to late next week depending on how quickly the flood waters recede.

The National Weather Service in Portland has issued a flood warning for the Willamette and Santiam rivers.

At 28 feet, the public can expect some flooding in North Albany, in Bryant Park, and in low areas west of Albany.

Flooding may also occur near the Harrisburg Bridge.

A flood warning has also been issued for the Santiam River near Jefferson.

The river level was 14.7 feet at noon Monday and flood stage is 15 feet.

The river was expected to exceed flood stage Monday afternoon.

If the river exceeds flood stage, there likely will be widespread lowland agricultural flooding.

Gallery: High Water in the Mid-Valley

‘It happened so fast’: Caught off-guard by flood, crew of Jim’s Fruit Stand struggles to reopen

It was getting close to midnight on April 9 when fast-rising floodwaters inundated Jim’s Fruit Stand, catching owner Jim Knight and employees …

Butte Creek carved a channel through Brownsville Road just north of the Middle Ridge Road intersection. Linn County Road will be closed until repairs can be made.

Bell Plain Road between the Railroad tracks and Highway 99E is closed due to flooding.

Dixon Creek where it passes under NW Grant Avenue in Corvallis on Monday Morning.

High water in the Marys River at the Fern Road bridge in Philomath Monday morning.

The Marys River flowing under the bridge on Fern Road in Philomath on Monday Morning.