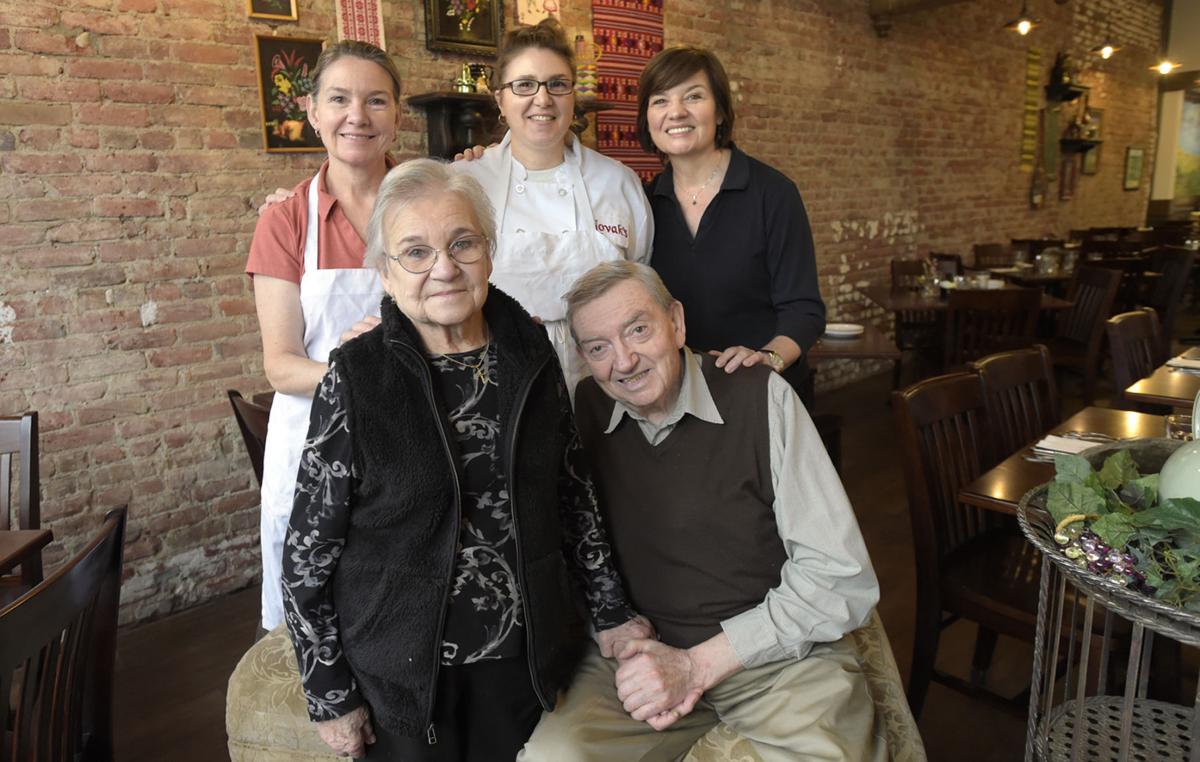 The Novak family poses at the downtown Albany location of Novak's Hungarian Restaurant in 2016. In front, Joseph and wife Matilda, with daughters, from left: Karen, Kaymarie and Matilda. Joseph, known as "Papa," died in January 2018. Matilda, also known as "Mama," died at the age of 84 on Tuesday. 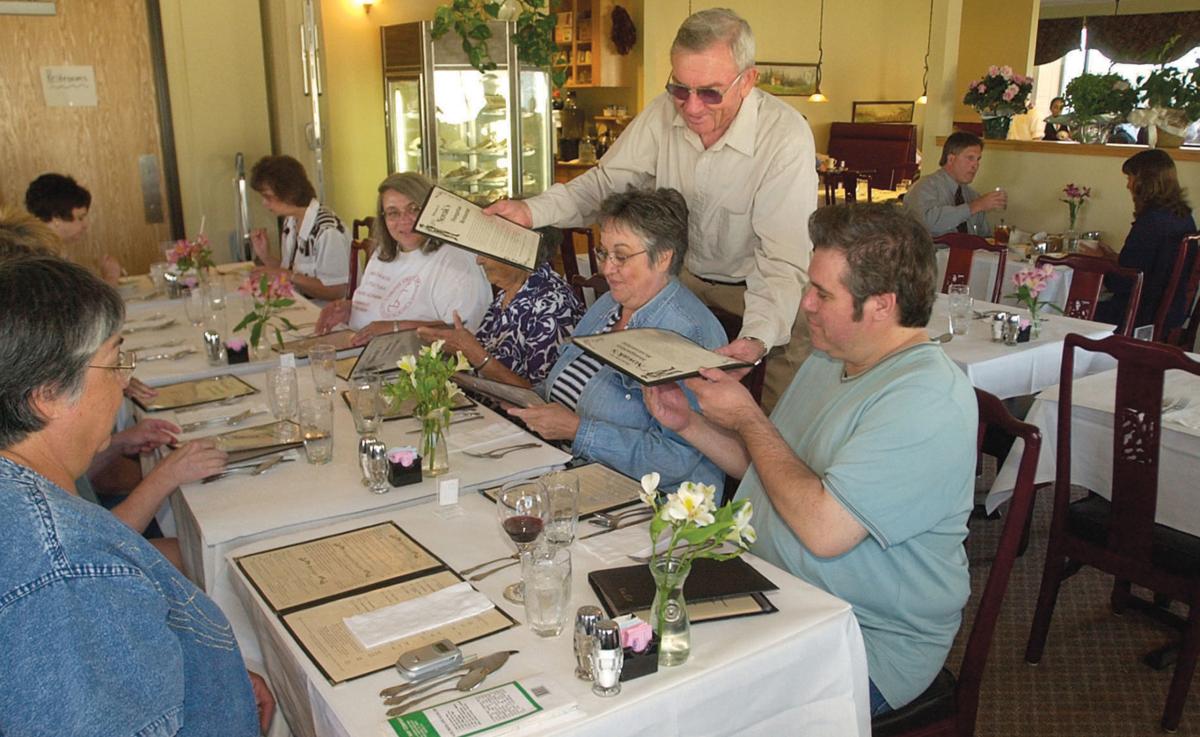 Joseph Novak passes out menus at his restaurant in 2000. 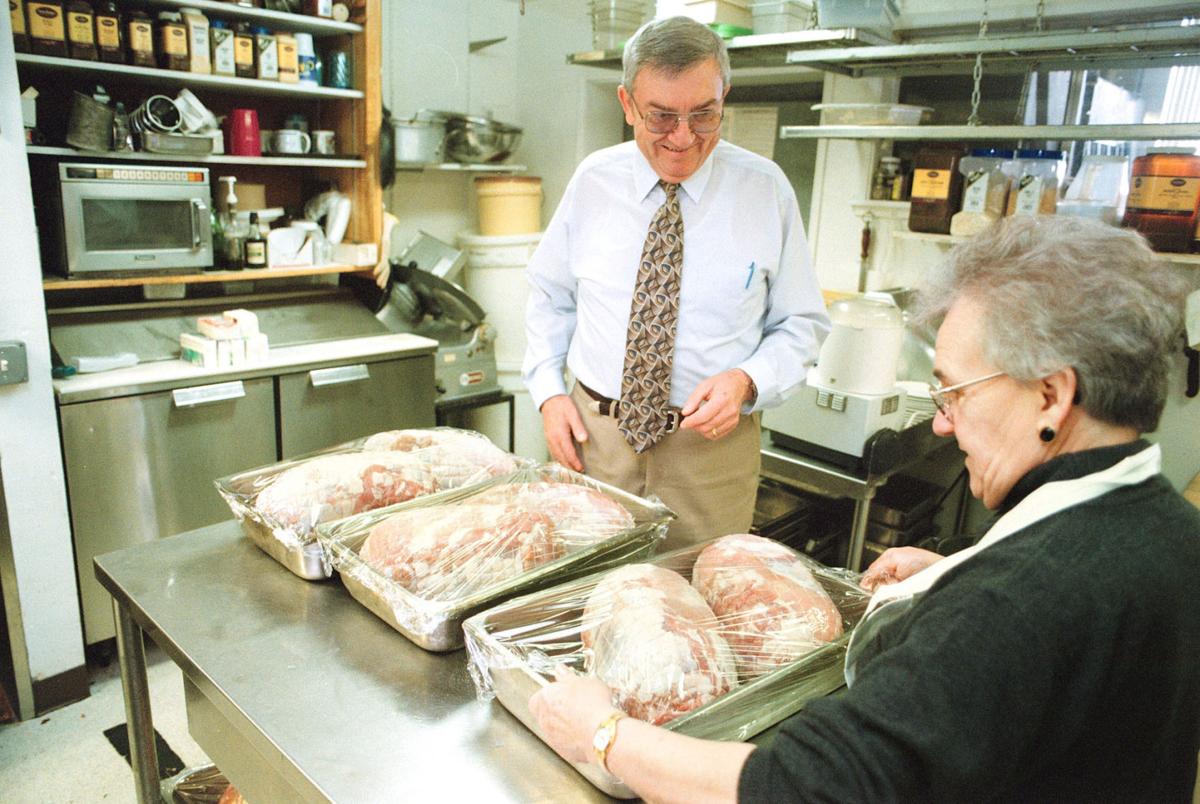 Joseph Novak watches wife Matilda wrap a pan of turkeys in 1999 as the couple begins preparations for their annual Thanksgiving dinner in Albany. 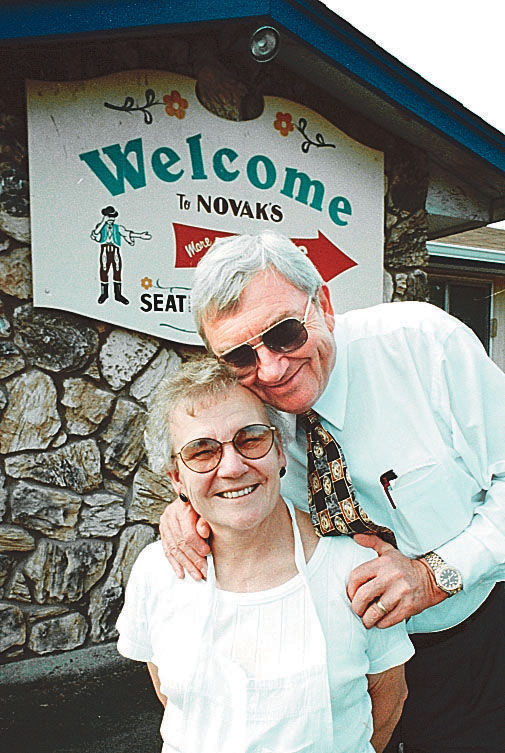 Joseph and Matilda Novak stand outside their restaurant's original Santiam Highway location in 1998. 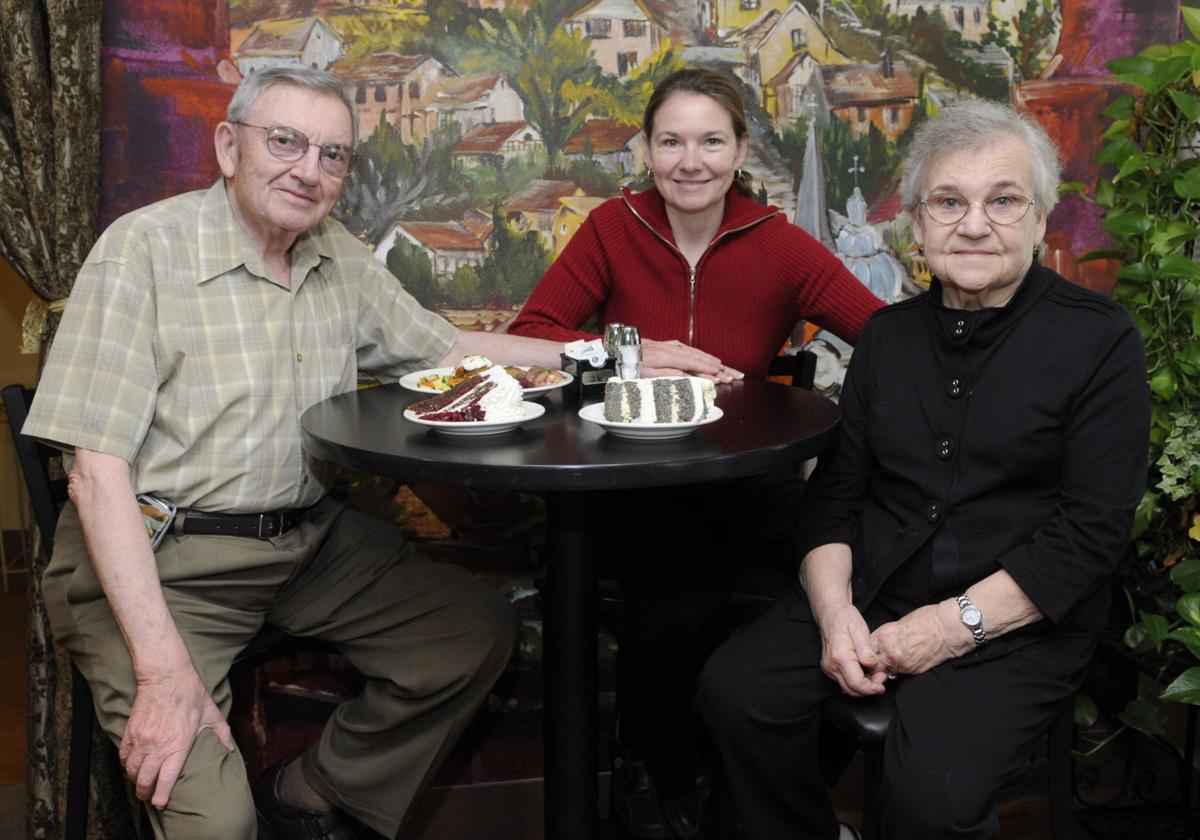 Joseph and Matilda Novak with their daughter, Karen. 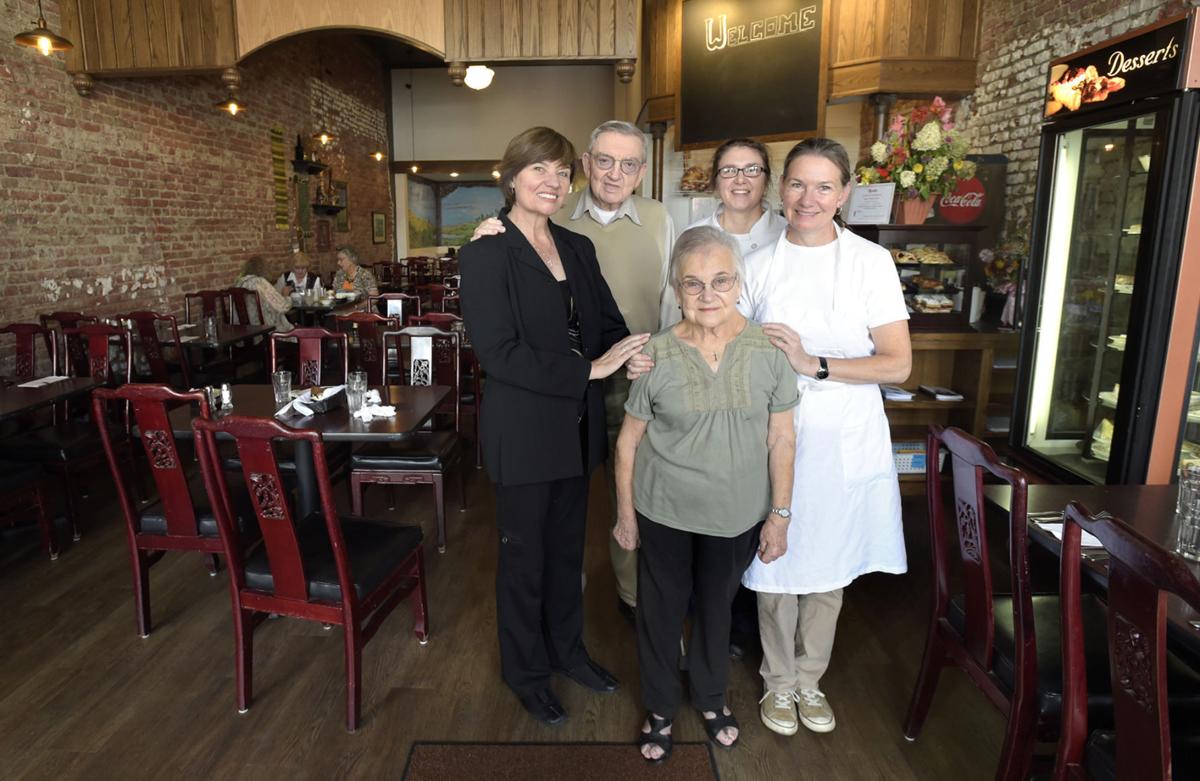 The Novak family at the downtown Albany location of Novak's Hungarian Restaurant in 2015. Back row, from left: Matilda, Joseph, Kaymarie and Karen. Joseph's wife Matilda stands in front. 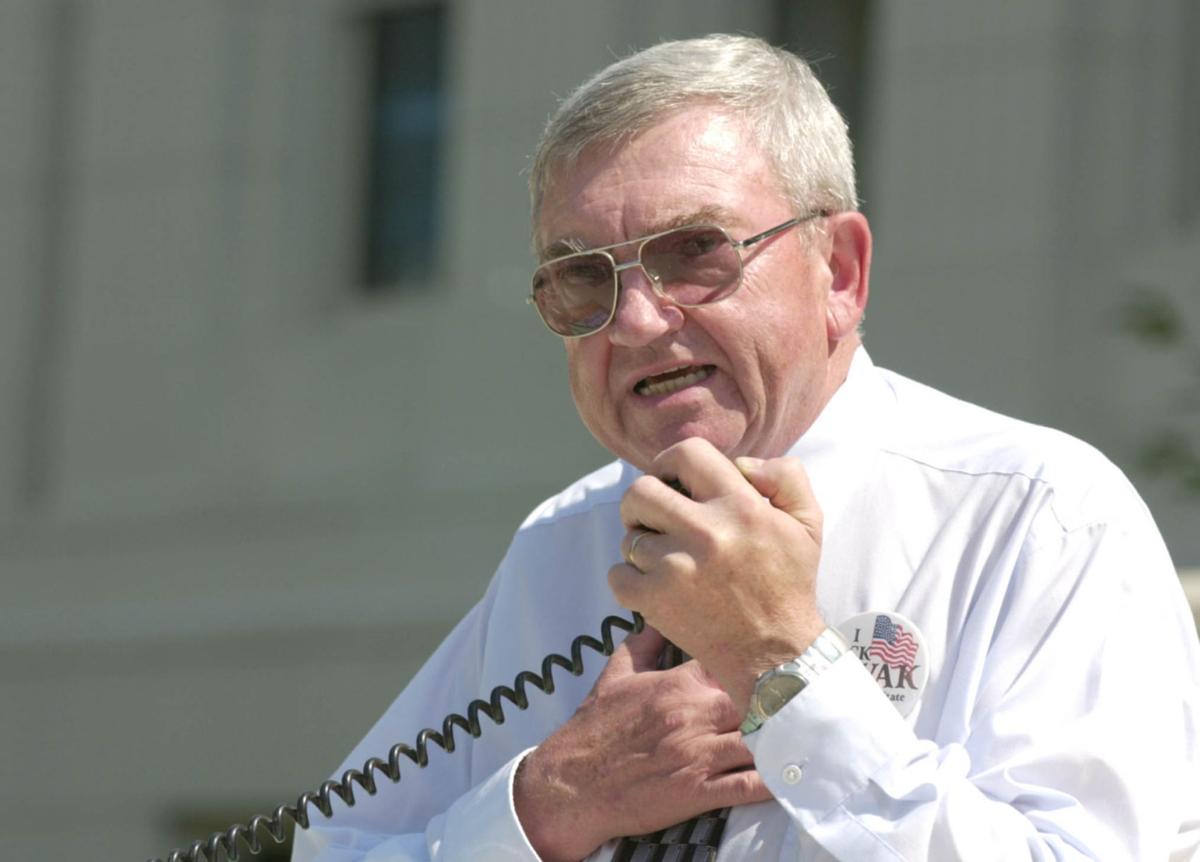 Joseph Novak announces a Senate run on the Linn County Courthouse steps in August of 2001.

It is often said in remembrance that someone “embraced” his family or community.

But Joseph Novak — immigrant, engineer, businessman and philanthropist — did so much more than that.

He unselfishly enveloped family and community in a giant bear-hug, infusing both with an unwavering love of life and a deep, personal faith.

He was quick to tell anyone he met — and there were many, since he owned one of the mid-valley's anchor restaurants for more than 30 years — that God is good and that America is indeed a great nation.

He leaves his wife Matilda, with whom he escaped the communist revolution in Hungary in 1957; his daughters, twins Karen and Matilda, and Kaymarie, who worked side-by-side with their parents at Novak’s Hungarian Paprikas beginning in 1984; sons Ed and Joseph; and a trainload of friends he made serving on the Board of Education at Linn-Benton Community College for 25 years.

He was chairman three times and vice chairman four times. He also was chaplain for the American Veterans Association and an ambassador for the Albany Area Chamber of Commerce.

Novak believed in giving back to his adopted hometown for all it had given him. For decades the family served more than 400 free Thanksgiving Day meals annually.

The family noted on social media, “Pop used to say, what a wonderful, beautiful, glorious day.”

They invited people to leave cards or flowers on his red chair at the restaurant, where he greeted all who entered with more than just a “hello” or “welcome.” Papa, as he was known, spent time getting to know the families that came in tempted by Matilda’s tried-and-true family-recipes — such as chicken paprikas — or to take home a handcrafted chocolate box.

When he shook hands, he would ask with sincerity, “How are you, my friend?”

Joseph and Matilda were college students when they met. They tried to escape during the Hungarian revolution but were caught and spent a year in a holding camp before being allowed to join her family in California in 1957.

Joseph worked for NASA in California and then Wah Chang in Albany. The family opened their first restaurant in 1984 and it has been housed in three different buildings since, most recently in an historic building in downtown Albany.

He was named LBCC’s Distinguished Citizen in 2007, was a guest speaker at commencement and was an honorary member of the Phi Theta Kappa International Honor Society for community colleges. He was the Veterans Day Parade Grand Marshal in 2012, and he and Matilda received the National Restaurant Association’s Faces of Diversity Award.

“Almost every year that I was there, Joe would stroll into the office before the Fourth of July and deliver a written (not emailed) letter to the editor reaffirming his thanks for living in America,” said Hasso Hering, who edited the Democrat-Herald for more than 30 years. “To some, his unabashed expressions of love for his country may have seemed a bit over the top. But as a fellow immigrant, who remembers as a boy in Berlin listening to the radio news of the Hungarian uprising, I completely understood why he was so grateful for the freedom and opportunities — and plain good luck — we have enjoyed in our adopted country.”

Albany Chamber of Commerce President Janet Steele said Novak’s love of community was at the forefront of all he did.

“Joe was a tremendous person,” Steele said. “He was one of the first people I met upon coming to Albany. He was a Chamber Woodpecker and an Ambassador for at least 30 years. The only thing that stopped him was his health.”

Steele said that even after Novak had to slow down, he was always “an honorary ambassador.”

“He was a guy who got to live the real American dream,” he said. “He came here from Hungary, went into business for himself and his work ethic and kindness have impacted a lot of people over the years. Our community will definitely miss him.”

Dale Stowell, director of institutional advancement at LBCC said, “Joseph Novak cared deeply about students and had a passion for working to create opportunity for people. He came from a country where opportunity and freedom were in short supply. Because of that, he was drawn to LBCC, where our entire focus is about creating opportunity.”

When Novak resigned from LBCC’s board of education in 2007 due to health reasons, he said, “I think LBCC is the finest community college in this state. Education is the greatest tool you can have in terms of economic development.”

Jon Carnahan worked closely with Novak during Carnahans 31 years with the college, 14 of those as president.

Novak also said he felt great pride when he flew over “that beautiful lady,” referring to the Statue of Liberty.

“I believe Joe would be incensed today by what’s going on in this country regarding immigrants,” Carnahan said. “He was the role model of someone who came here, escaped communism, thrived and was a contributing member of our community.”

As good and faithful as Novak was, he did have a minor flaw, Carnahan added with a laugh.

“Even though Joseph was a very humble man, he thought he could park anywhere he wanted on campus because he was the board chairman,” Carnahan said. “He would get a ticket and ask me to fix it. I paid for several of those tickets out of my own pocket.”

Novak was a tireless advocate of keeping tuition as low as possible for students and he was against the college serving alcohol on campus.

“He just didn’t think students should drink,” Carnahan said. “But our culinary students needed to learn how to pair wine with foods as part of their program.”

Shelly Garrett, executive director of the Lebanon Chamber of Commerce said, “Joseph Novak never failed to make an impression on people he met. He made me proud to be an American because he always talked about how much he loved America and how good it was to his family.”

She said Novak was a “man of great faith in God, his country and fellow man” who was both generous and encouraging, a true citizen.”

The Novak family poses at the downtown Albany location of Novak's Hungarian Restaurant in 2016. In front, Joseph and wife Matilda, with daughters, from left: Karen, Kaymarie and Matilda. Joseph, known as "Papa," died in January 2018. Matilda, also known as "Mama," died at the age of 84 on Tuesday.

Joseph Novak passes out menus at his restaurant in 2000.

Joseph Novak watches wife Matilda wrap a pan of turkeys in 1999 as the couple begins preparations for their annual Thanksgiving dinner in Albany.

Joseph and Matilda Novak stand outside their restaurant's original Santiam Highway location in 1998.

Joseph and Matilda Novak with their daughter, Karen.

The Novak family at the downtown Albany location of Novak's Hungarian Restaurant in 2015. Back row, from left: Matilda, Joseph, Kaymarie and Karen. Joseph's wife Matilda stands in front.

Joseph Novak announces a Senate run on the Linn County Courthouse steps in August of 2001. 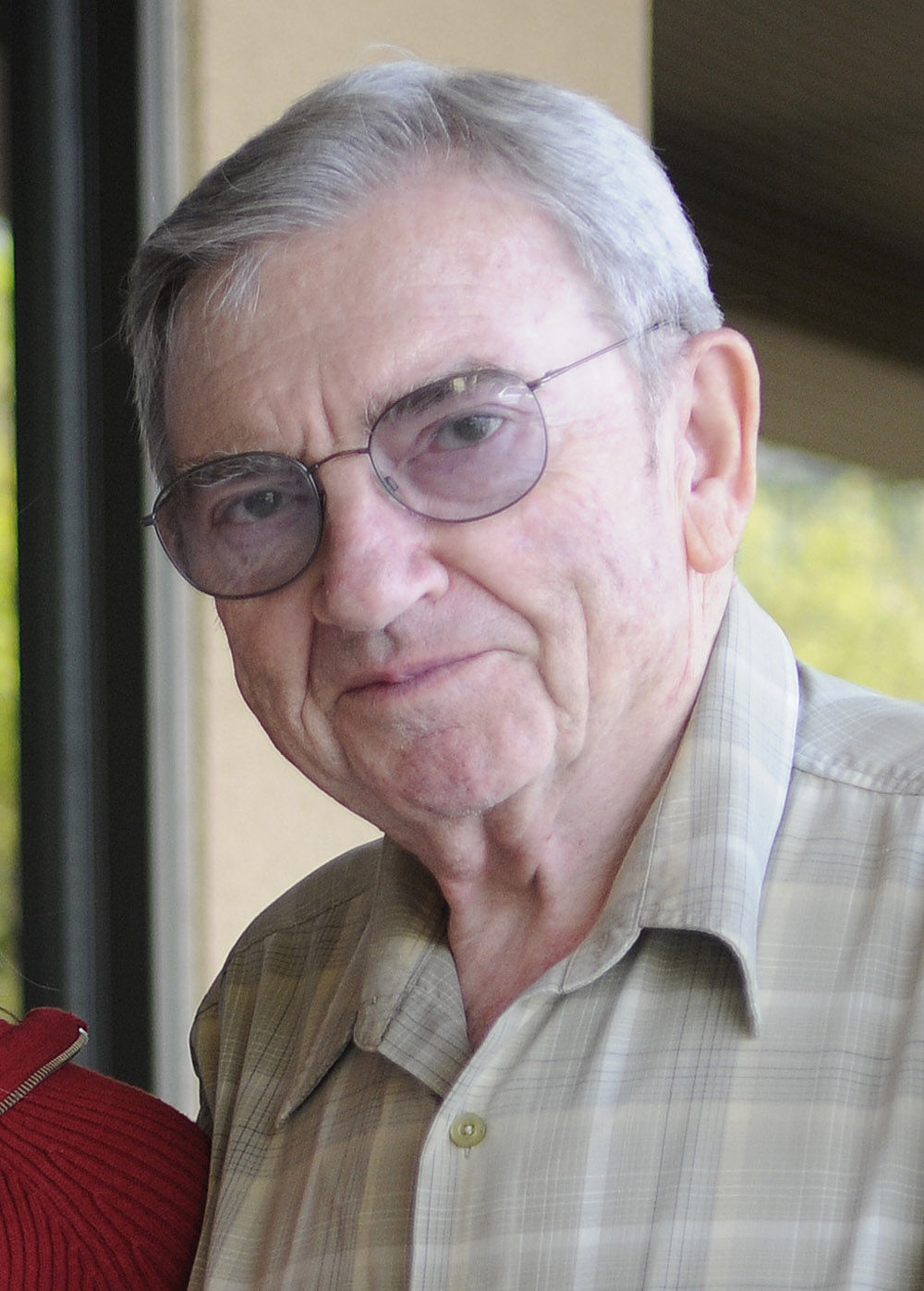