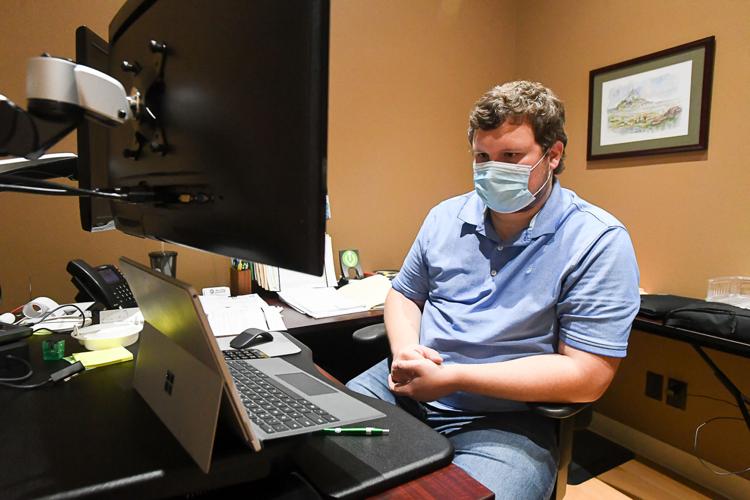 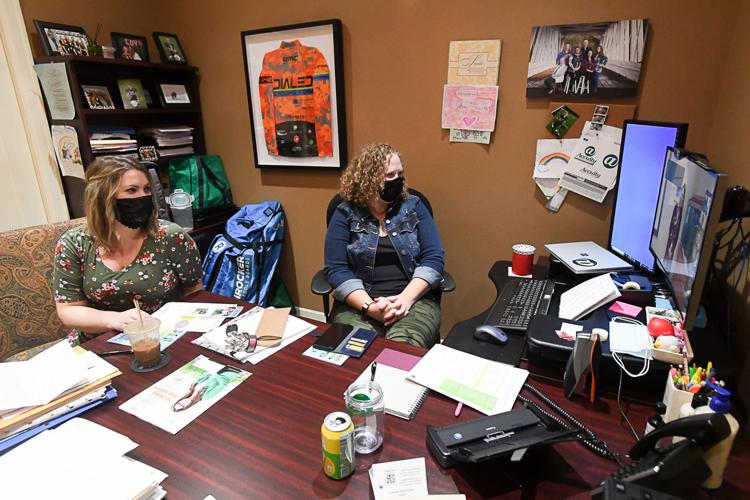 Gracie Herstad, left, and Kori Sarrett at Accuity in Albany participate in a Zoom child abuse prevention training session with ABC House on Wednesday. ABC House hopes to train 2,020 adults in 2020. About 500 adults have been trained so far.

The COVID-19 pandemic has forced individuals and businesses in Linn and Benton counties to reinvent their daily operations, whether they are students taking classes online or businesses competing in the international marketplace.

ABC House is no exception.

The nonprofit is dedicated to preventing child abuse and providing services to abused children. It continues to spread the word about child abuse prevention, but has taken its training online.

“Our goal in 2020 was to train 2,020 adults in the area of child abuse prevention,” explained Rebecca Simmons, the community prevention coordinator for ABC House. “Since March, due to COVID-19, we have moved our training from on-site to online.”

Simmons said more than 500 adults have completed training sessions in how to recognize, prevent and respond to child abuse, and three to four new companies are being added weekly.

Wednesday morning, eight staff members at Accuity LLC, an accounting firm in downtown Albany, added their names to the list of program graduates.

“We wanted to help a number of local charities this year,” staff member Brice Rust said. “With COVID-19, that made it difficult, but our owner, Kori Sarrett, serves on the ABC House board and brought this program to our attention.”

Rust is the father of a 3-year-old daughter and 6-month-old son.

“This program touches us,” Rust said. “We want to learn about children’s behaviors and help prevent child abuse in our own communities.”

Rust said taking the training online wasn’t difficult, because the company has been working with clients online for months.

The ABC House building isn’t open to the general public, so Accuity employees took a virtual tour and staff members described their work responsibilities before the training began.

Simmons said training class sizes have ranged from three to more than 30.

“We would prefer to keep class numbers to a maximum of 35 or so, because even though the program is online, we encourage lots of discussion,” Simmons said.

Simmons added that some class members from other states as well as foreign countries have participated.

ABC House Executive Director Jennifer Gilmore-Robinson said it is too early to tell how the COVID-19 pandemic will affect child abuse issues.

“We do know that ABC House saw a 25% increase in referrals during June, July and August of this year compared to the same months last year,” she said. “That doesn’t necessarily mean abuse is increasing, but we are certainly aware and concerned.”

Gilmore-Robinson said that at the start of the pandemic, there was a significant drop in the number of calls to the area child abuse hotline.

“But the number of cases referred for investigation by Child Protective Services has returned close to normal,” Gilmore-Robinson said. “That’s even with fewer mandatory reporters available since school is online.”

Gilmore-Robinson said she has been saddened by the severity of both sexual and physical abuse cases ABC House staffers are working with.

ABC House provides assistance to about 700 children each year, on-site or through consultations.

Businesses that would like to offer online training to their employees may contact Simmons by calling 541-926-2203 or visit www.abchouse.org.

The rebuilding of communities hit hard by recent wildfires — from affluent and urban Napa, California, to rural and economically challenged De…

Linn County families displaced from their homes due to the recent wildfires can still vote in the upcoming general election on Nov. 3, accordi…

Corvallis woman seeks kidney donor — even from a Ducks fan

Corvallis resident Leslie Olsen is a diehard OSU Beavers sports fan, but she would gladly accept a kidney from a University of Oregon Ducks fan.

The Philippines, top provider of nurses, face a shortage at home

The Philippines, top provider of nurses, face a shortage at home

An ‘Independent’ party could dominate American politics, according to study

An ‘Independent’ party could dominate American politics, according to study

Gracie Herstad, left, and Kori Sarrett at Accuity in Albany participate in a Zoom child abuse prevention training session with ABC House on Wednesday. ABC House hopes to train 2,020 adults in 2020. About 500 adults have been trained so far.