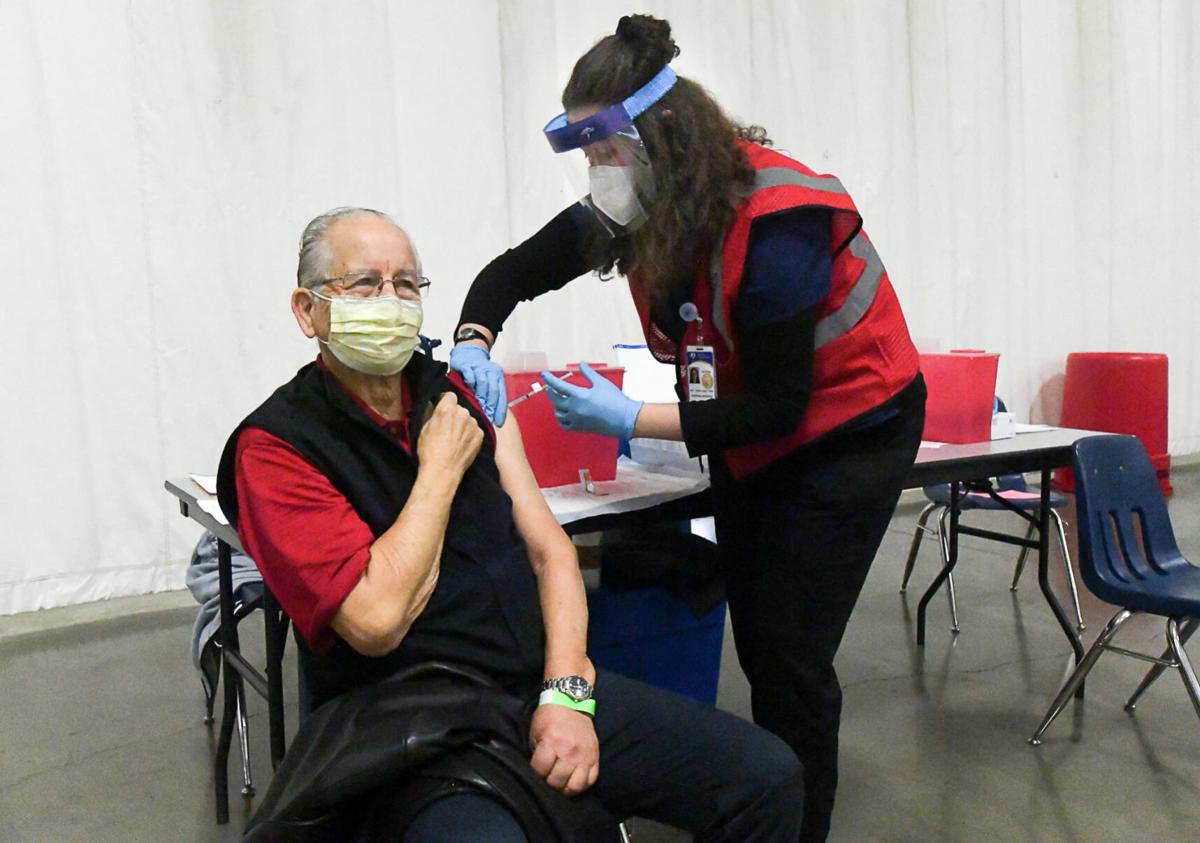 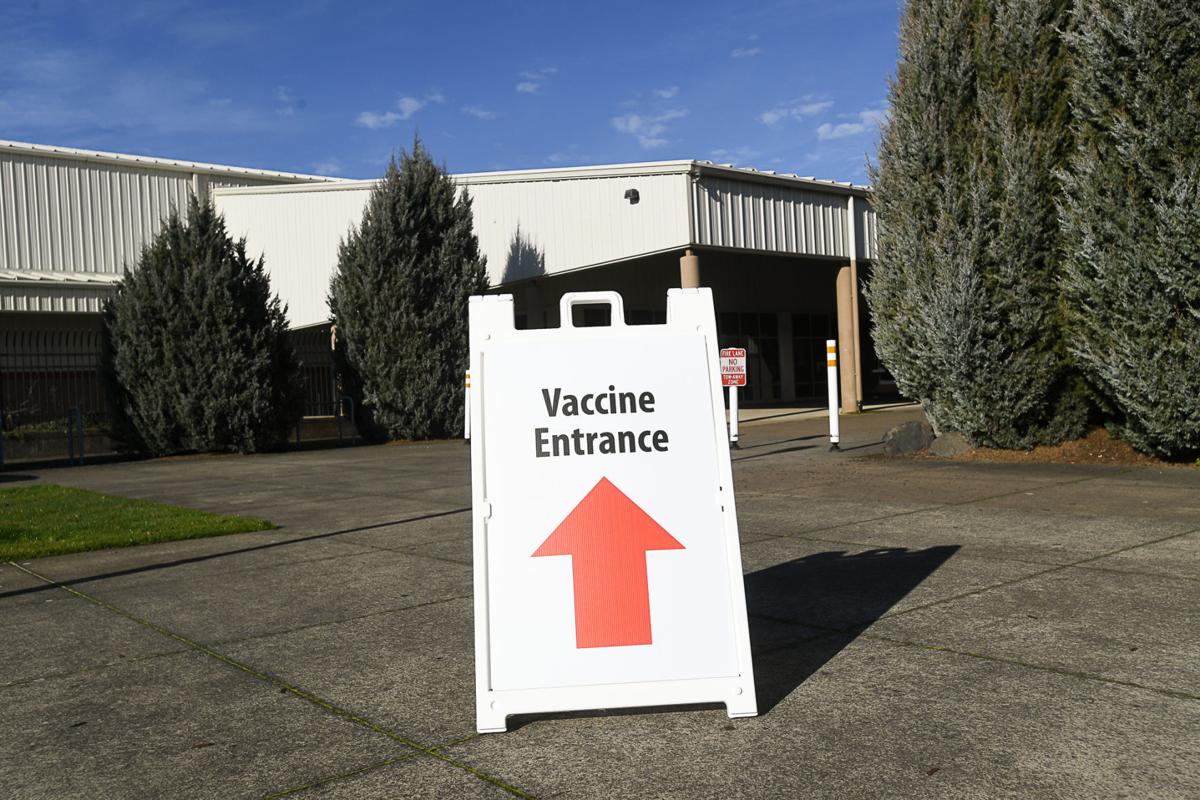 A mass vaccination event was held Tuesday at the Linn County Fair & Expo Center. Other clinics will be held Wednesday and Thursday as well. 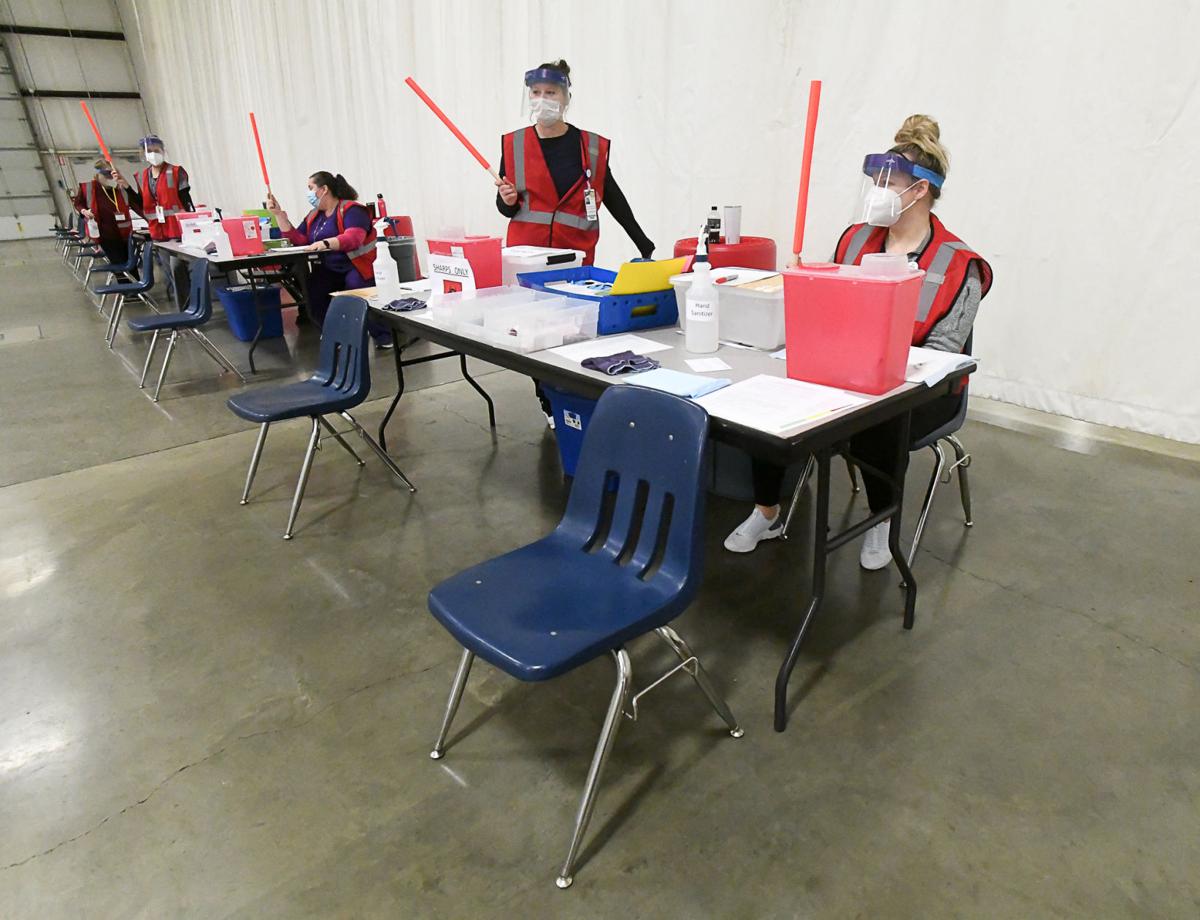 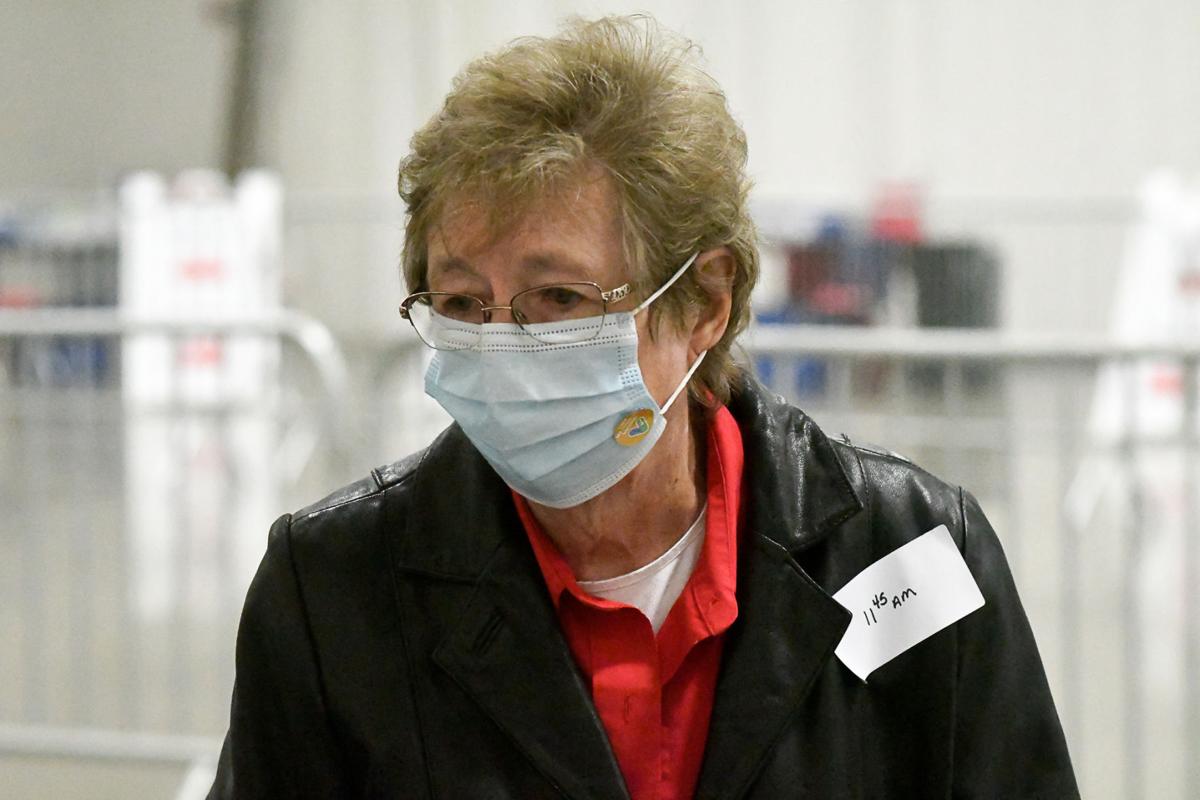 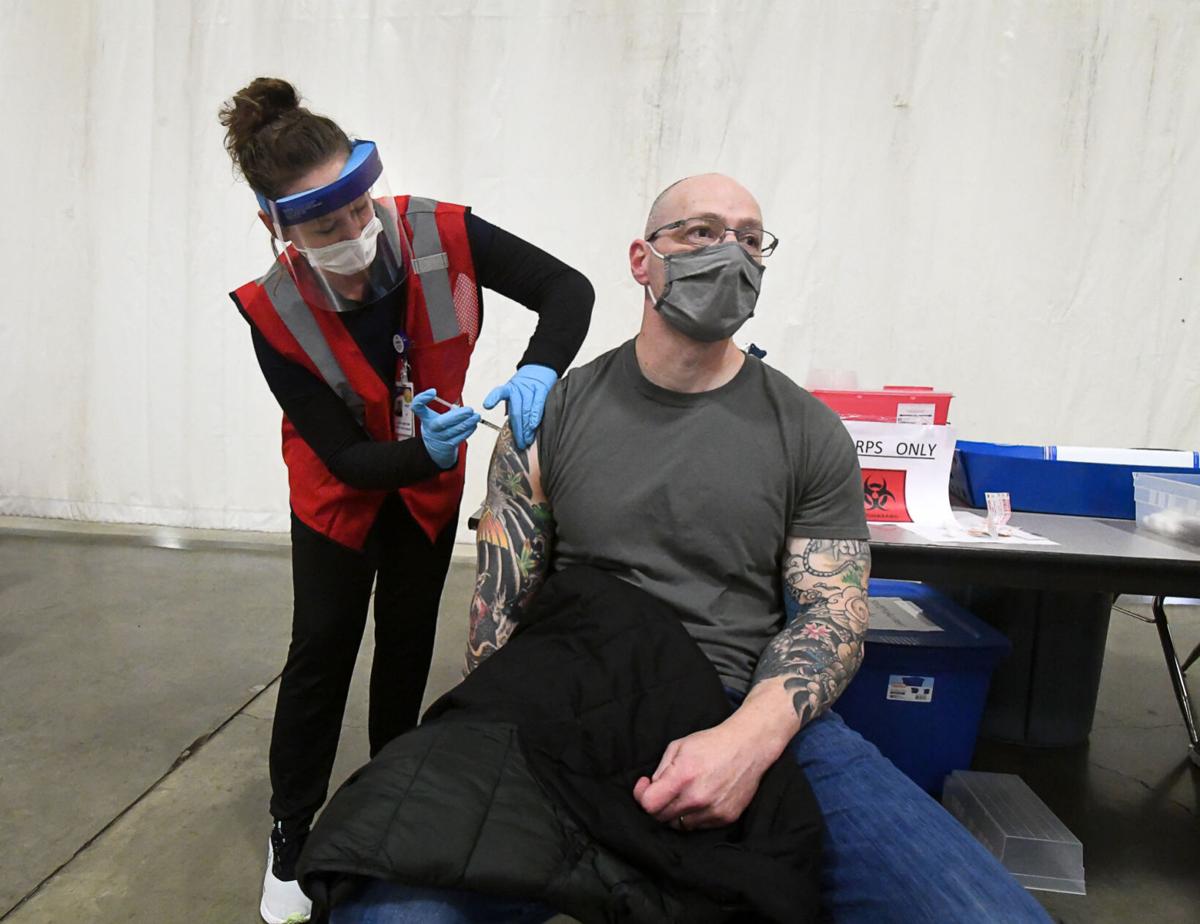 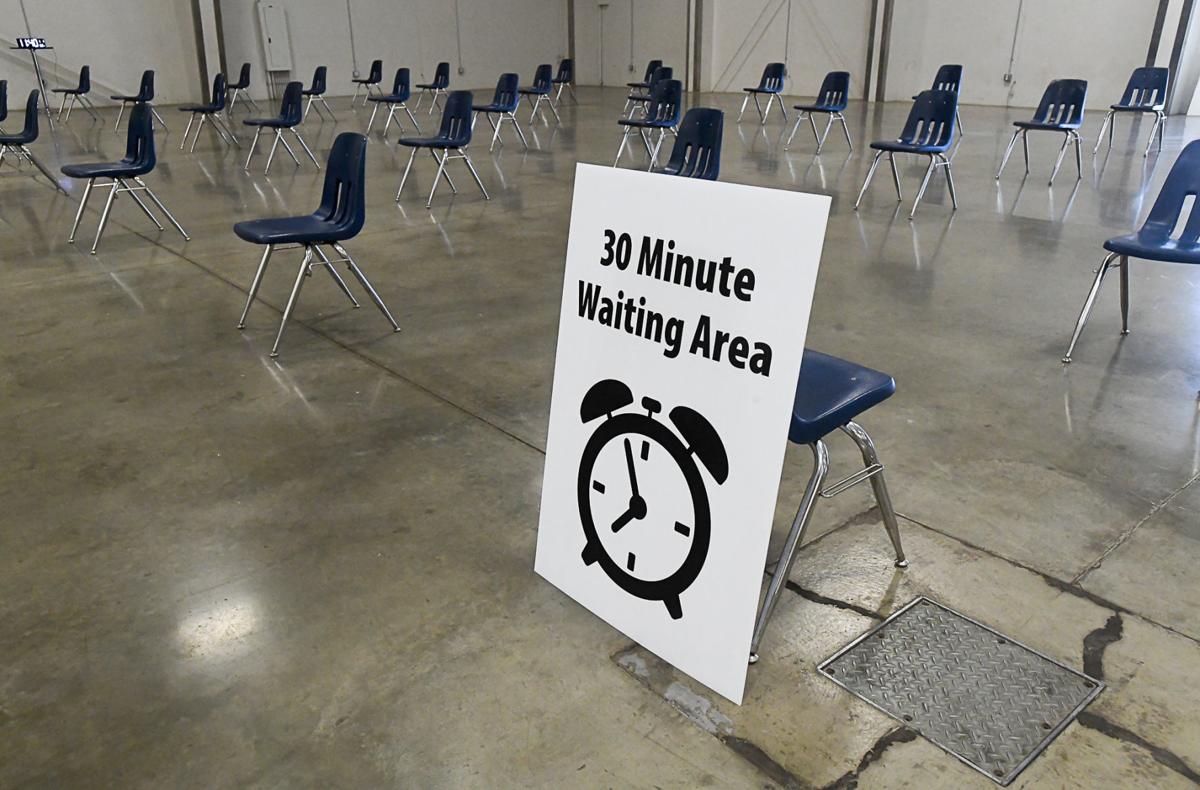 Linn County Health Director Todd Noble was a little concerned it might take a while to work the bugs out of a mass COVID-19 vaccination clinic set up at the Linn County Fair & Expo Center.

But Tuesday morning, it appeared that staff from Linn County and Samaritan Health Services were working like a well-oiled machine as the first of 300 mid-valley residents received their initial doses of the Moderna vaccine. They will get a second shot in 30 days.

“Did you catch me smiling?” 79-year-old Len Butterfield of Corvallis asked a photographer after his picture was taken. “I hope I didn’t look like a grump.”

Of course, with a mask on, it was impossible to tell whether the Hewlett-Packard retiree was smiling or frowning.

Butterfield said he and his wife, Sharon, 80, were happy to get their shots.

“We have a group home in our neighborhood, and we like to interact with residents,” Butterfield said.

“I don’t even like to watch people get shots on TV,” Butterfield said. “But she was very gentle. She was very good at this.”

Bass said she was excited about being a part of Tuesday’s vaccination effort.

“I am so glad that we are getting to do this,” Bass said. “The quicker we do this, the quicker we can get back to normalcy.”

Sharon Butterfield said she and her husband knew they would get shots as soon as their turns came.

“We miss social interaction,” she said.

Ben Schosha, 51, said he was “absolutely” ready to get his shot.

“I have no issues with the vaccines, and I’m glad to get it,” Schosha said. “I have no fears, no worries about it.”

Schosha said he was getting a shot because he works for the Benton County Juvenile Department.

Mid-valley residents were required to preregister and were provided with a health questionnaire when they arrived at the fairgrounds.

Outside Willamette Hall, eligible residents who signed up for the shots had their temperature taken and were asked to sanitize their hands.

Inside the hall, tables filled with a mixture of Linn County and Samaritan employees went over the health questions.

When each person’s time came, they moved into the main part of the building, where dozens of tables and chairs were set up.

Up to 50 people at a time can get vaccinations.

Medical staff quickly provided the shots and gave each person a tag with a time when they could leave the building. They were asked to assemble in another large room for 15 minutes before leaving to ensure they did not have any negative reaction to the shots.

Medical staff was present in that room as well, complete with oxygen and medical kits.

But more clinics are planned, based on the number of vaccines available.

Samaritan will also hold clinics in Benton and Lincoln counties starting next week.

Tuesday, Wednesday and Thursday of next week, clinics will be held at Oregon State University’s Reser Stadium in Corvallis. It will be open to people who live in Benton, Linn and Lincoln counties.

The initial clinics will be for people in the state’s 1a category, which includes urgent care workers, skilled nursing and memory care facility health care providers and residents, emergency medical services providers and other first responders, among others.

Samaritan’s Larissa Balzer said the clinic was scheduled to open at 10 a.m., but everyone was ready and people were lined up, so it began 30 minutes early.

Last week, Brown announced a new plan to begin vaccinating those 80 and older the week of Feb. 8 and expand eligibility in the following weeks to include those 75 and older, 70 and older and 65 and older.

The state’s educational employees will also be eligible for vaccines beginning Jan. 25.

SALEM — For the opening day of the legislative session, it was eerily quiet at the Oregon Capitol Thursday.

Nyquist: 2020 was year of scrambling to help people

Roger Nyquist has spent more than 20 years serving on the Linn County Board of Commissioners, so he is no stranger to the complexities of work…

A mass vaccination event was held Tuesday at the Linn County Fair & Expo Center. Other clinics will be held Wednesday and Thursday as well.