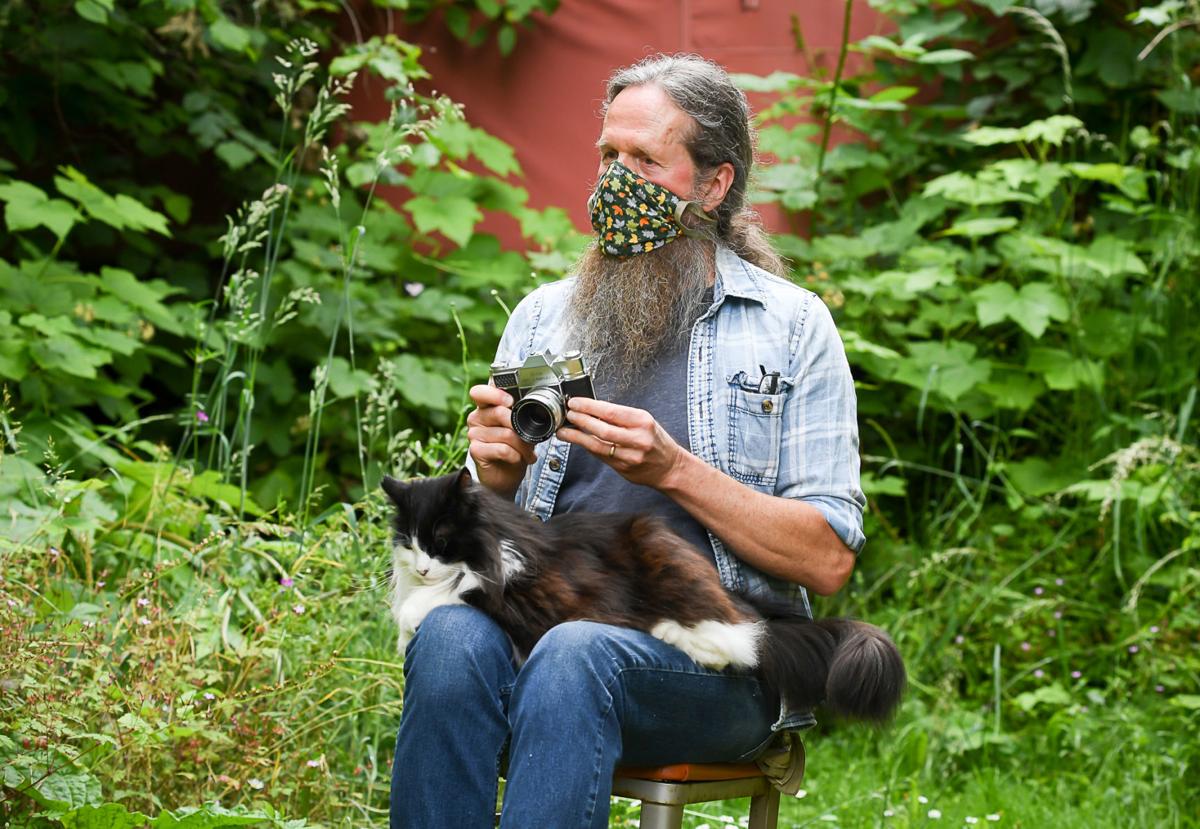 Paul Barden of Corvallis has started restoring Kodak Retina cameras from the 1930s through the 1960s. 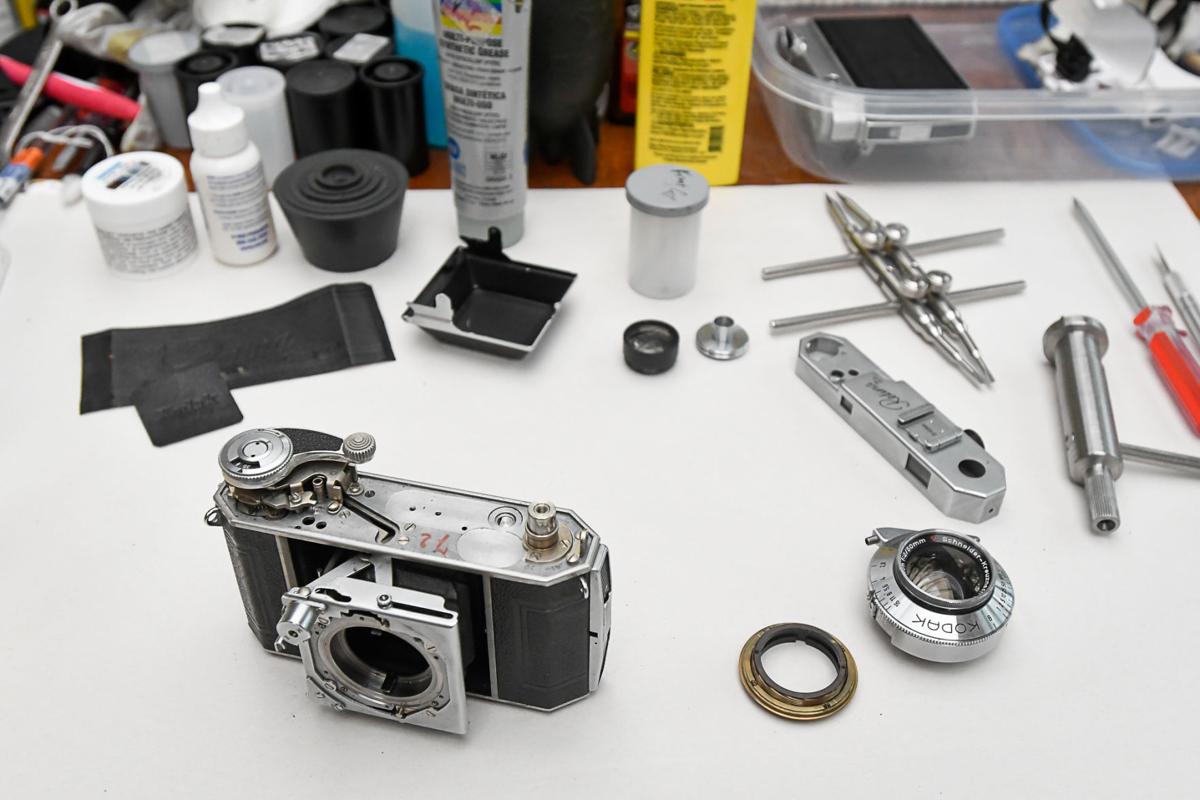 The latest Kodak Retina camera Barden is in the process of restoring. 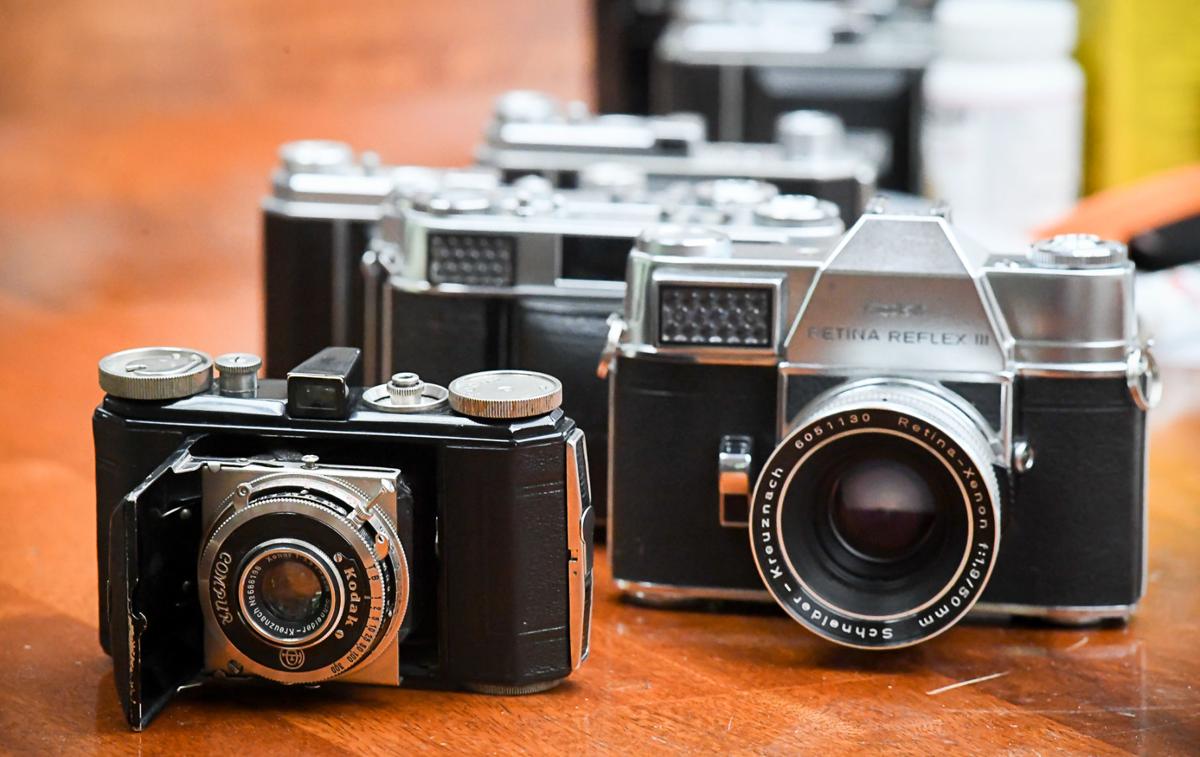 A selection of the cameras that Barden has restored. 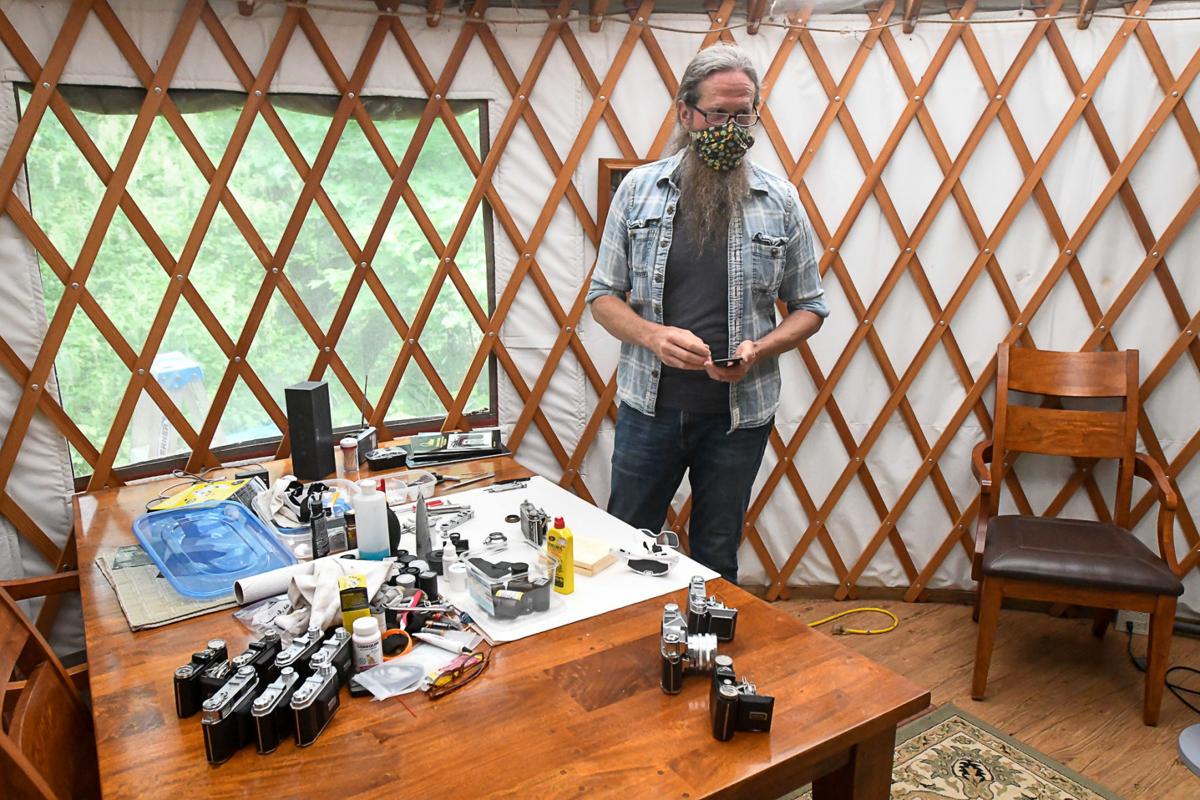 Barden in his summer studio with some of the Kodak Retina cameras he has restored and one in the process of restoration.

CORVALLIS — Paul Barden has been working with cameras ever since his grandmother gave him an old Brownie Starflash when he was 11 or 12.

He studied painting and photography at the Ontario College of Art in Ontario, Canada, worked with fashion and photographic artist Deborah Samuel for a few years, then for several decades split his time between being a "photographer for hire" and a technician for other artists before retiring and moving to Oregon some 23 years ago.

Now 60, the Corvallis artist and photographer's favorite medium is the wet plate collodion process: hand-poured emulsion onto a blackened metal plate that is inserted into a camera, given an exposure time of one to five seconds, then immediately developed to produce a black-and-white tintype photograph. (Check out his portfolio on Flickr at paulbarden.com.)

For the past few years, however, his photography work has added a new dimension: restoration. Specifically, Barden restores Kodak Retina cameras, a German-built 35mm series manufactured from 1934 through the late 1960s.

How many does he have? "We don't talk about that," he quipped, but allowed as how there are probably more than 40 in his collection.

Nor is it really a collection, all things considered. Once restored, the cameras are fully functional works of art.

"I use every one of the cameras that I restore at least once," he said.

Barden's restoration work started in July 2017, when a friend, Don Ferguson at Shadowsmith Photographics in downtown Corvallis, offered to sell him a 1945 Retina 010 for $20.

Barden had heard of the Retina series. The cameras produced high-quality photos at a relatively low cost. And unlike their competitors, they were pocket-sized; easy to pack.

At that point, he was working with 8x10 cameras, but figured for $20, he didn't have much to lose. So he agreed, took the camera home and began poking around.

Searching online for information, he came across Chris Sherlock, a retired Kodak repair technician living in New Zealand who had uploaded a series of do-it-yourself videos to YouTube. After studying the videos, Barden felt he could try fixing his own.

The aperture blades were clogged with old grease, and the shutter tended to stick open. But with Sherlock's videos as a guide, Barden took the machine apart, cleaned it up and got it back into working condition.

Taking what was essentially an unusable piece of junk and bringing it back to life was "an oddly satisfying experience," Barden said.

He checked out eBay and found another Retina to fix. And then another. And another.

Sure, he could have stopped at one. Except he couldn't.

So he kept going. And along the way, Barden learned plenty about his new hobby, particularly through information from David Jentz of the Historical Society for Retina Cameras.

He learned Kodak started the series when it bought an existing camera factory in Stuttgart, Germany, in the 1930s. Until then, the company's cameras had been cheap and relatively low-quality, and Kodak wanted a change.

The original Kodak Retina, produced in 1934, was the first to include what Kodak called a "daylight loading cassette." It could just be popped into the back of the camera at any time, eliminating the need for photographers to spool and load the film in the dark or to purchase a special cassette form. And it came with 36 exposures, triple what was being offered by comparable cameras. And while at $73 it wasn't cheap — somewhere around $1,000 in 21st-century terms — it was still relatively affordable.

The 1934 Retina 117 model became one to hunt for, and Barden found it on eBay just last year.

"That was the one. 'Cause it's the first of the bunch," he said.

"It's an elegant piece of design," he said.

It usually takes Barden eight or nine hours over a couple of days to bring a Retina back to life. They're so well-made and well-engineered, he said, that unless they've really been abused, or someone has broken a piece during an attempted repair, they usually come back good as new.

Parts tend to get stuck over time because grease dries out, so most problems are merely ones of maintenance. "Lighter fluid's my best friend in this job."

The Retinas did become more complex in their three decades or so of existence. The first ones didn't have light meters or rangefinders, for instance; those came later. And the first models didn't have the "fast wind" mechanism, the thumb-crank lever that advanced the frame and cocked the shutter all in one move.

Kodak didn't keep records from its Stuttgart facility. But from Jentz's studies, Barden learned the company saw how World War II was progressing and set up the business for protection by constructing a building of reinforced concrete with a secret bunker. Inside the bunker, behind a false wall, Kodak hid tens of thousands of component parts so cameras could be quickly reassembled after the war was over. The model Barden picked up for $20 was one of those — he can tell by the serial numbers on the body and the shutter.

Between Jentz and Sherlock, Barden learned plenty about Retinas — including what he did and didn't want to do with them.

The Retina Reflex, for instance, produced in the early '60s, is a beautiful model that boasts a light meter and Kodak's first single lens reflex design. SLR cameras allow the users looking through the viewfinder to see exactly what they'll actually shoot instead of an image that's upside down. But the Reflex camera uses a complicated series of pulleys and silk strings to link its shutter speed with its aperture and its exposure. Barden didn't dare touch it.

"This is so impossibly complex internally, I won't even consider taking this apart," he said. "I saw a video of Chris (Sherlock) unspooling that and thought, no way." Sherlock is probably the only person who can fix the model properly, he added, so he sent it to him.

No, Barden said, he probably can't fix your grandfather's old camera that you found in an attic last year, or the beat-up camera you picked up at that garage sale some time ago. Not unless it's part of the early Kodak Retina series. His skill set is pretty much limited to those, he said. And even if it is a Retina, he may not want yours — although you can check with him.

And he doesn't really fix the ones he finds to sell. He could, perhaps, but given the amount of time and effort they take to fix, there wouldn't be much of a profit involved.

"I'm not really paying myself for the work," he said with a wry smile behind his cloth coronavirus mask.

Barden said he doesn't get out much anyway, even without the threat of a global pandemic. He and his husband already have a lot to do on their farm property bordered by the Marys River on the southeast edge of Corvallis.

Still, with the threat of COVID-19 shutting off the usual trips to restaurants or coffee shops, he had some larger-than-usual blocks of time available. Perfect for sitting down in his summer yurt studio and dismantling a camera body or two — or for experimenting with them to make the tintypes that comprise his favorite art projects.

Seeing the images he shoots come to life fascinates him the way it always has, ever since his days working with his grandmother's Brownie Starflash with a home developing kit he got for Christmas and a darkroom he improvised in the family bathroom, using three layers of bath towels over the window to block every speck of light.

"The things that happen in a darkroom that end with a physical image ... it's kind of alchemy. It's magic," he said. "I never get tired of it."

Back on the merry-go-round: Artists return to work at Albany carousel, but riders still have to wait

Leslie Arnold of Corvallis celebrated a special anniversary May 27: her second year, to the day, of carving for Albany’s downtown carousel.

Play in a day by remote? Unprecedented!

Karl can’t get his microphone off mute. Karen won’t stop yelling at her kids. Maris is skipping the meeting entirely so she can Zoom into her …

As the COVID-19 infection rates began to rise and schools, businesses and public places began to shut down, Michael Winder of Albany felt the …

Richard Heggen gets the same reaction pretty much anytime someone hears he likes to carve wooden saints as a hobby:

Paul Barden of Corvallis has started restoring Kodak Retina cameras from the 1930s through the 1960s.

The latest Kodak Retina camera Barden is in the process of restoring.

A selection of the cameras that Barden has restored.

Barden in his summer studio with some of the Kodak Retina cameras he has restored and one in the process of restoration.