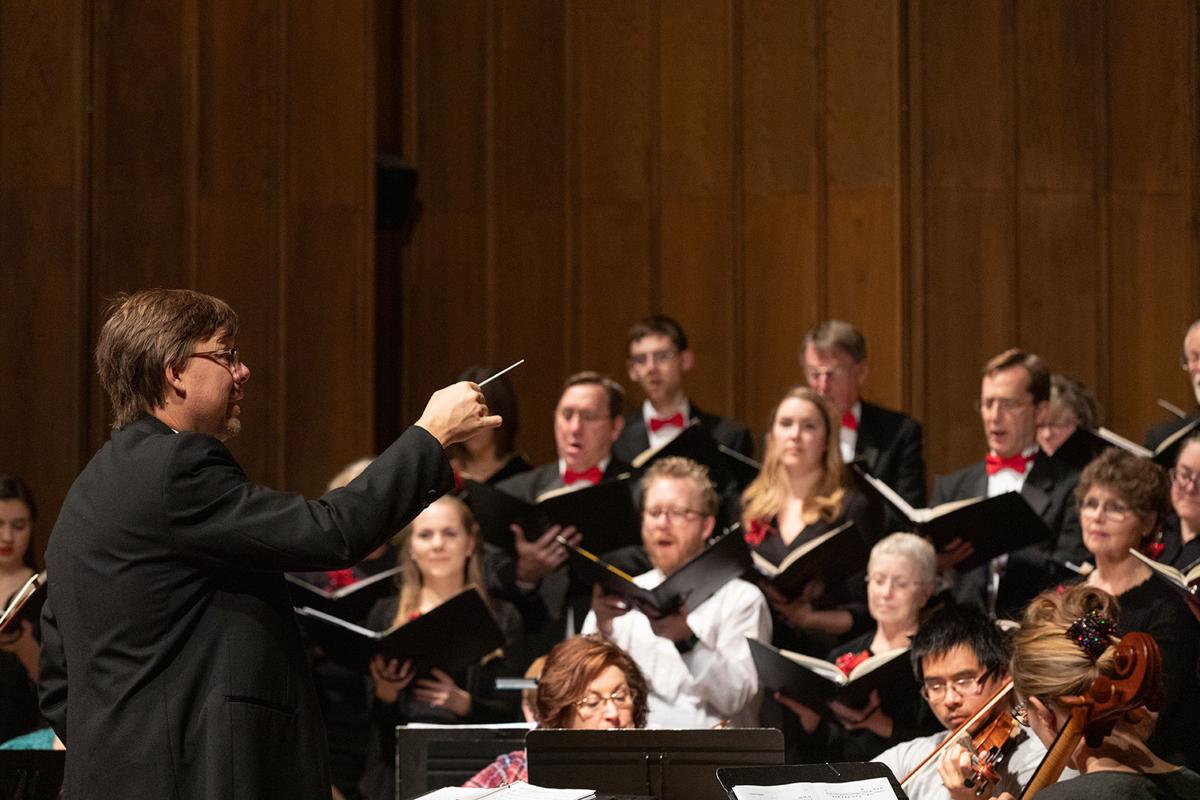 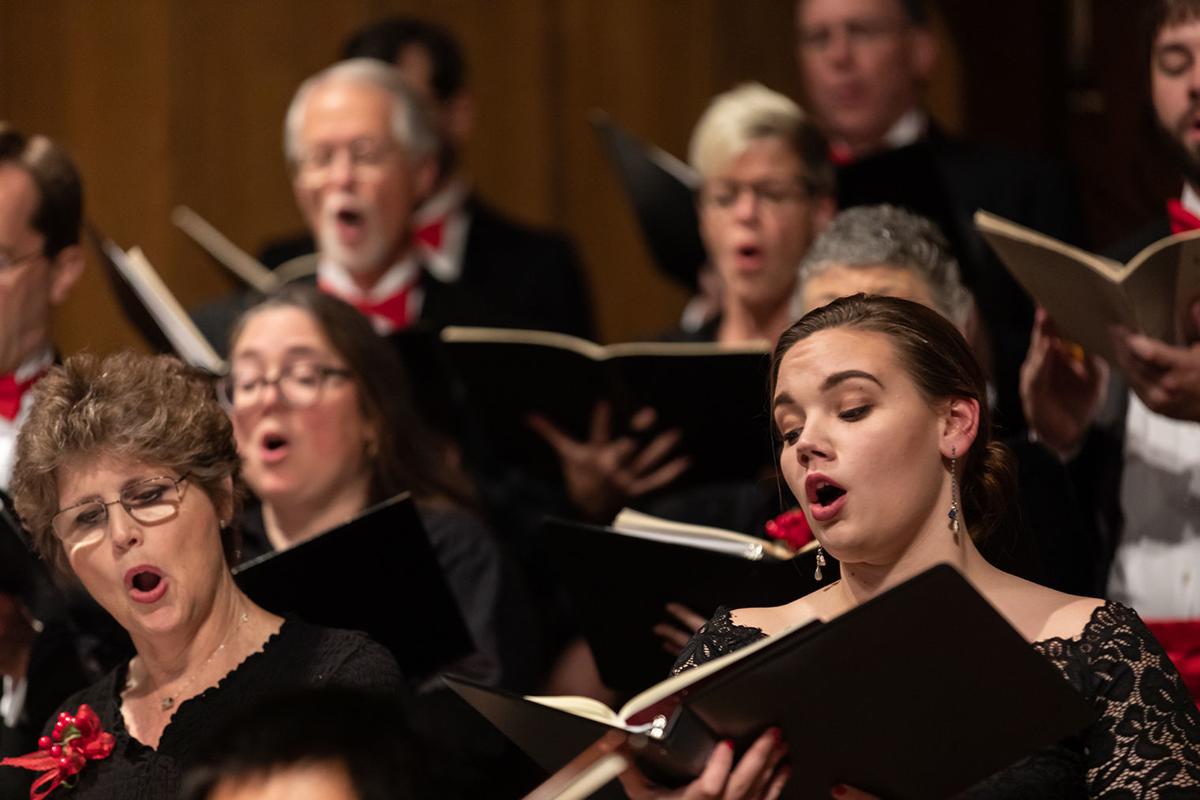 What began as a slip of the tongue — or the keystroke; Steven Zielke doesn't quite remember — grew from appreciative laughter at an unintended pun to a much-anticipated, fully loaded, emotionally exhilarating program to wrap the Corvallis Repertory Singers' 2019-20 season.

It begins, as much in classical music does, with German composer Johann Sebastian Bach. Not only is he retrospectively regarded (the Baroque period genius went largely under-heralded until a 19th-century reappraisal) as one of the most exceptional composers to have ever breathed air, he just has one of those names: "Bach." As a word, it's irresistible. You can use it as a simple rhyme, swaddle it in alliteration (as the choir did in 2014 with "Bach and Bluegrass"), write terrible headlines with it or play on its relationship to the word "back."

Which is what happened a few years ago when Zielke, the chorale's artistic director, outlined a number of concepts for future performances.

Yet it had a potential worth exploring. What to choose of Bach's extensive catalog? What other composers would comprise this "empire"? Was it possible to tie their music to a specific overarching theme? And if so, what theme would that be?

In other words: Valentine's Day.

The evening's first half begins with passion — the Passion, specifically, a word derived from the Latin "passus," or "having suffered." First performed in 1724 at the St. Nicholas Church in Leipzig, Germany, Bach's "St. John Passion" ("Passio secundum Joannem," though the Corvallis Repertory Singers perform it in English) depicts the arrest, torture and crucifixion of Jesus Christ.

From this work Zielke has selected the portions involving Judas Iscariot's betrayal of Jesus in the Garden of Gesthemane, Peter's refusal to acknowledge himself as one of Christ's disciples, and an angry crowd demanding their former messiah's execution ("We have no king but Caesar!"), followed by Roman-appointed Judean governor Pontius Pilate's apparently reluctant capitulation.

"I find the betrayal such an interesting part of the story," Zielke said. "Here you have this figure that is a member of the resistance, shall we say, and not always necessarily in the way that people would want him to be. It shows how in one moment you can be the star and everyone loves you. Then the next minute, people are throwing eggs, tomatoes and rotten vegetables. Fame and renown are quickly fleeting. And the crowd is appealing to the dominant political paradigm and authority, whereas they're sort of an occupied territory by Rome."

The concert's second half is the somewhat lighter, operatic "Star Wars" to its predecessor's "Empire Strikes Back" darkness. It contains a trove of Giuseppe Verdi, opening with the rousing "Anvil Chorus" from "Il Trovatore" (1853), familiar to anyone immersed in popular culture as a go-to musical representation of industry. The chorale also performs his earlier "Chorus of the Hebrew Slaves" ("Nabucco," 1842), a stirring choral lament from within Babylonian captivity. "Brindisi," a drinking song from 1853's "La Traviata" contains the sentiment "Here's to wine and love," albeit performed with greater power than the collective lungs at your neighborhood public house could manage.

Other titles include Henry Purcell's "Dido's Lament" and "Final Chorus" ("Dido and Aeneas," ca. 1680), with its heartbreaking farewell of "When I am laid, am laid in earth / may my wrongs create no trouble ... in thy breast / Remember me ... but ah! forget my fate." And how could a Valentine's Day program be complete without the "Habanera" aria from Georges Bizet's "Carmen" (1875)?

"Empire" concludes with the Act I finale of Gilbert and Sullivan's comic libretto "The Mikado" (1885), featuring Anne Hubble as Katisha, a vengeful woman in love with Nanki-Poo, the son of the Japanese emperor. "Anne is worth the price of admission all by itself," Zielke said.

Zielke also commended Oregon State University voice instructor Dr. Nicholas Larson, describing him as "money in the bank, a brilliant operatic tenor," and recent OSU graduate and mezzo-soprano Caitlyn Douglas. "This is your chance to hear her before she goes to graduate school," Zielke said.

"The Empire Strikes Bach" doesn't boast too many parallels to the ongoing George Lucas-crafted space-opera saga that inspired it, although Zielke is still entertaining ideas. One may involve a "Mikado" moment punctuated by something more "galaxy far, far away" than a simple sword. Another may feature winks from Frederic Chopin's "Marche Funebre." Another — well, let's just leave it to the Force and move along.

Meanwhile, Zielke plots Bach-related programs for the future. Like "Bach to the Future," maybe, with sequels. The possibilities are limitless.

"I would pair one of the many cantatas that I really want to do, and I need an excuse to do it," he said of that dream program. "The word 'back' is used a lot in popular culture: songs, movies and so forth. When I told the board I wanted to do 'Bach to the Future,' I got groans, so it might be a few years before I can pull that one off."

Tough crowd. But no one can keep a good idea down. It'll be Bach.

WHAT: "The Empire Strikes Bach"

ATLANTA (AP) — A prosecutor in Atlanta will decide whether to open a formal investigation after meeting with a woman who says she has evidence legendary singer James Brown's death was caused by another person, his spokesman said.

Deborah Voigt was in California earlier this week when she got a text from a friend on the East Coast.

When Ronnie Baker Brooks was young, his father would drive them out to the late, great Theresa's Lounge, tucked in a basement on Chicago's Sou…

NASHVILLE, Tenn. (AP) — A publicist for Willie Nelson says Paul English, Nelson's longtime drummer and the inspiration for Nelson's song “Me and Paul,” has died. He was 87.

NASHVILLE, Tenn (AP) — Country singer Darius Rucker couldn’t quite believe it when he was surprised this week with the news that his song “Wagon Wheel” was certified eight times platinum, making it one of the top five most popular country singles ever.

BERLIN (AP) — One person has been killed and 4 others were injured in a shooting late Friday outside a Berlin event venue, German authorities said Saturday.