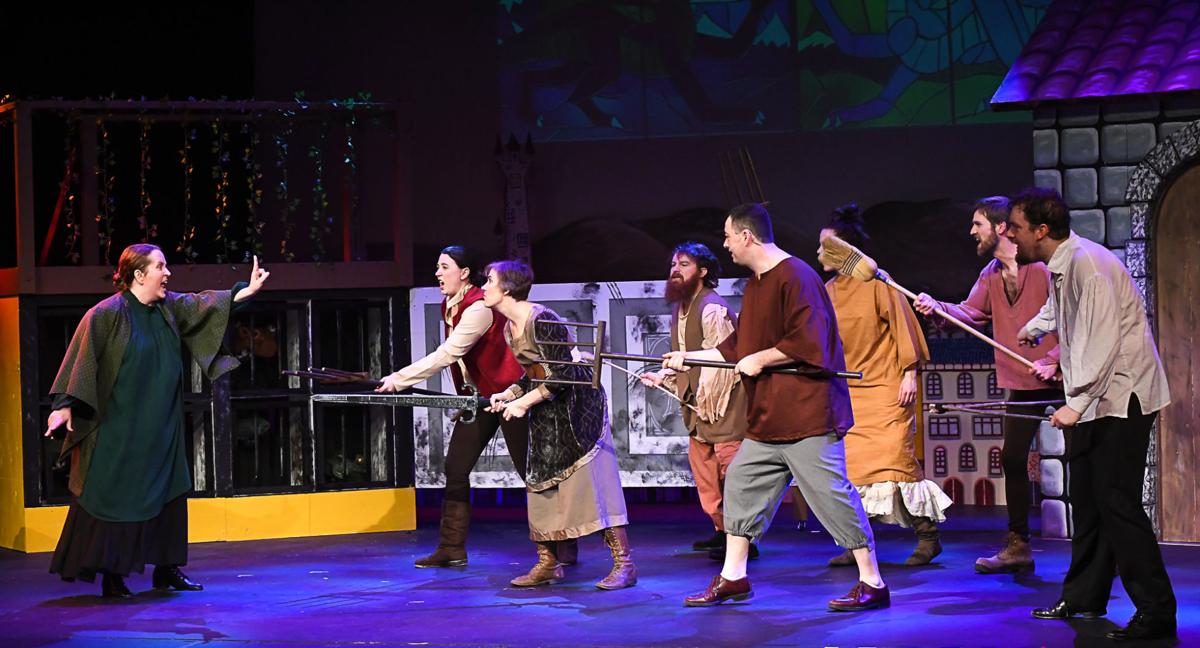 Lady Ramkin (played by Nancy Homan, left) is confronted by an angry mob bearing pitchforks and other terror-striking implements in a production of Terry Pratchett's "Guards! Guards!", opening Friday at the Majestic Theatre in Corvallis. 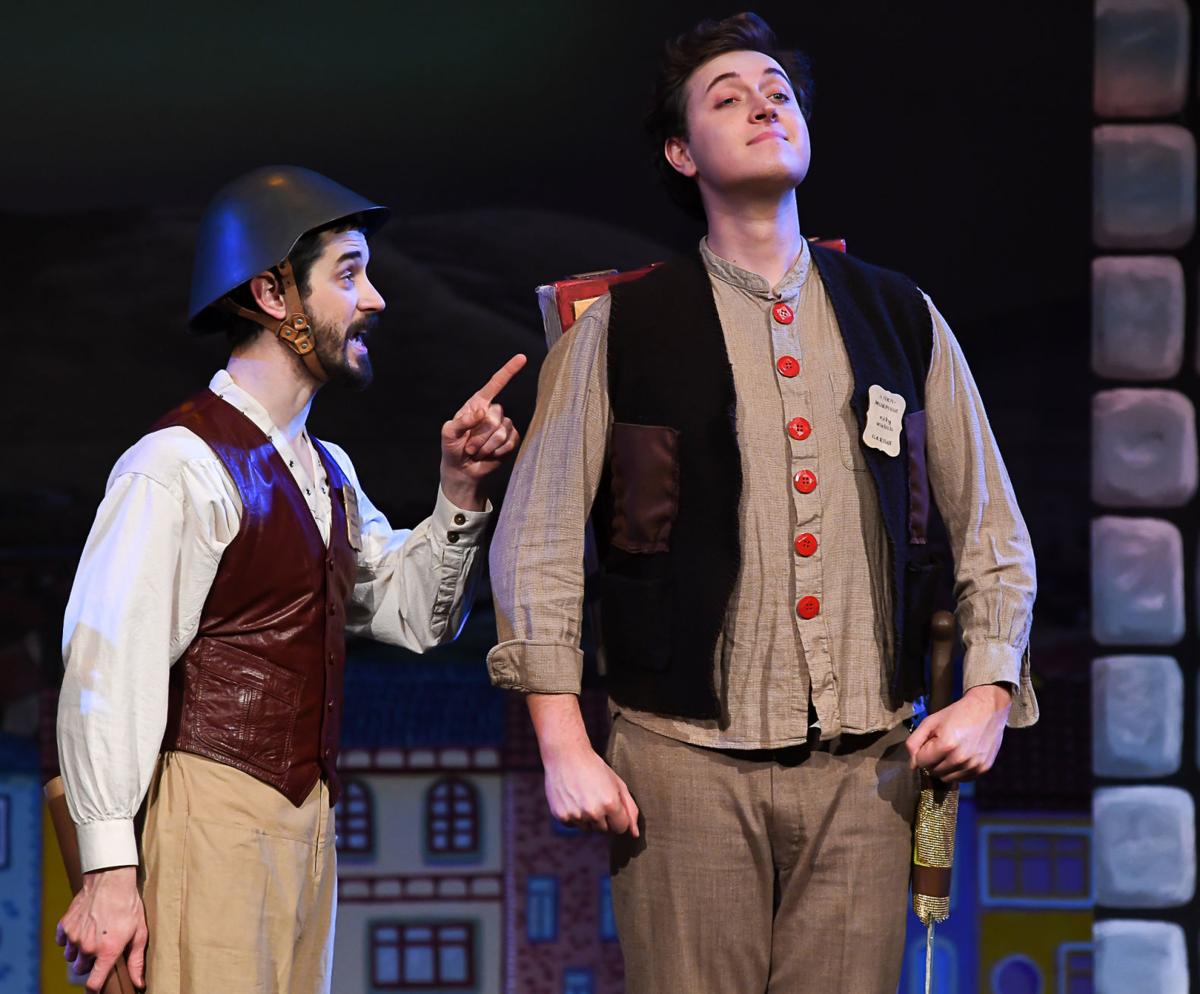 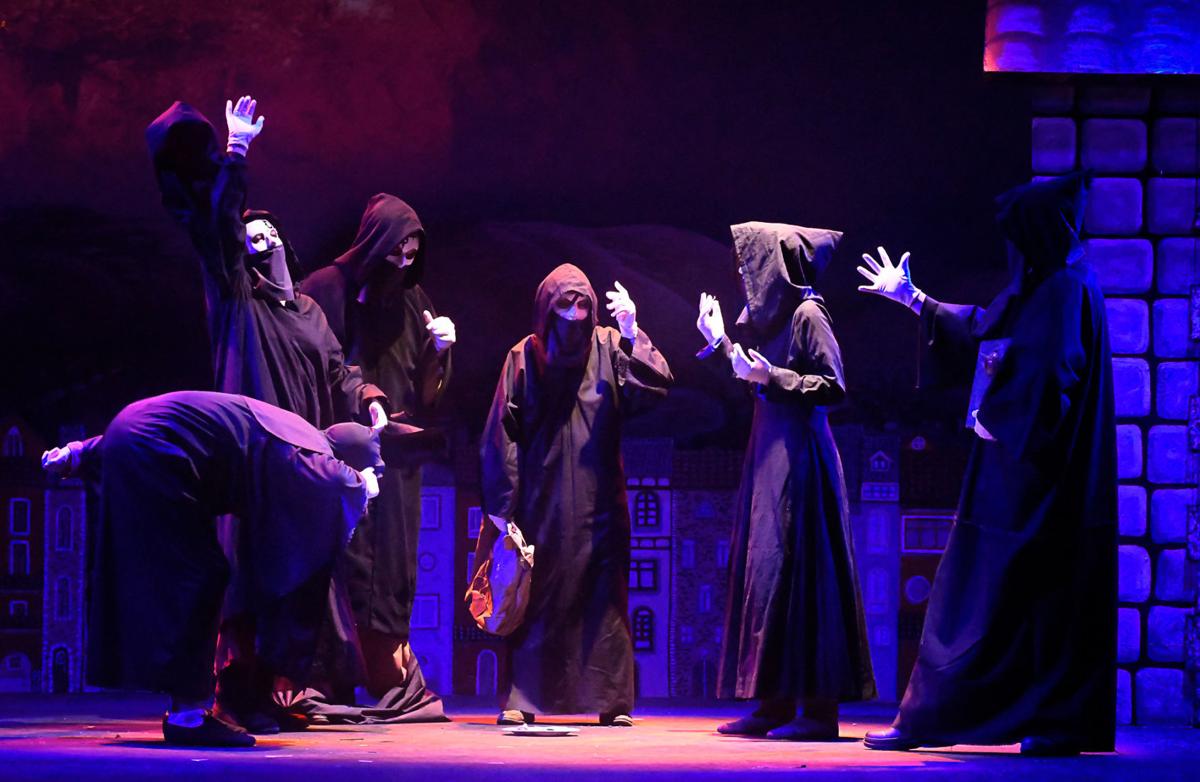 Magic is used to summon a dragon in Terry Pratchett's "Guards! Guards!," set to open Friday at the Majestic Theatre in Corvallis. 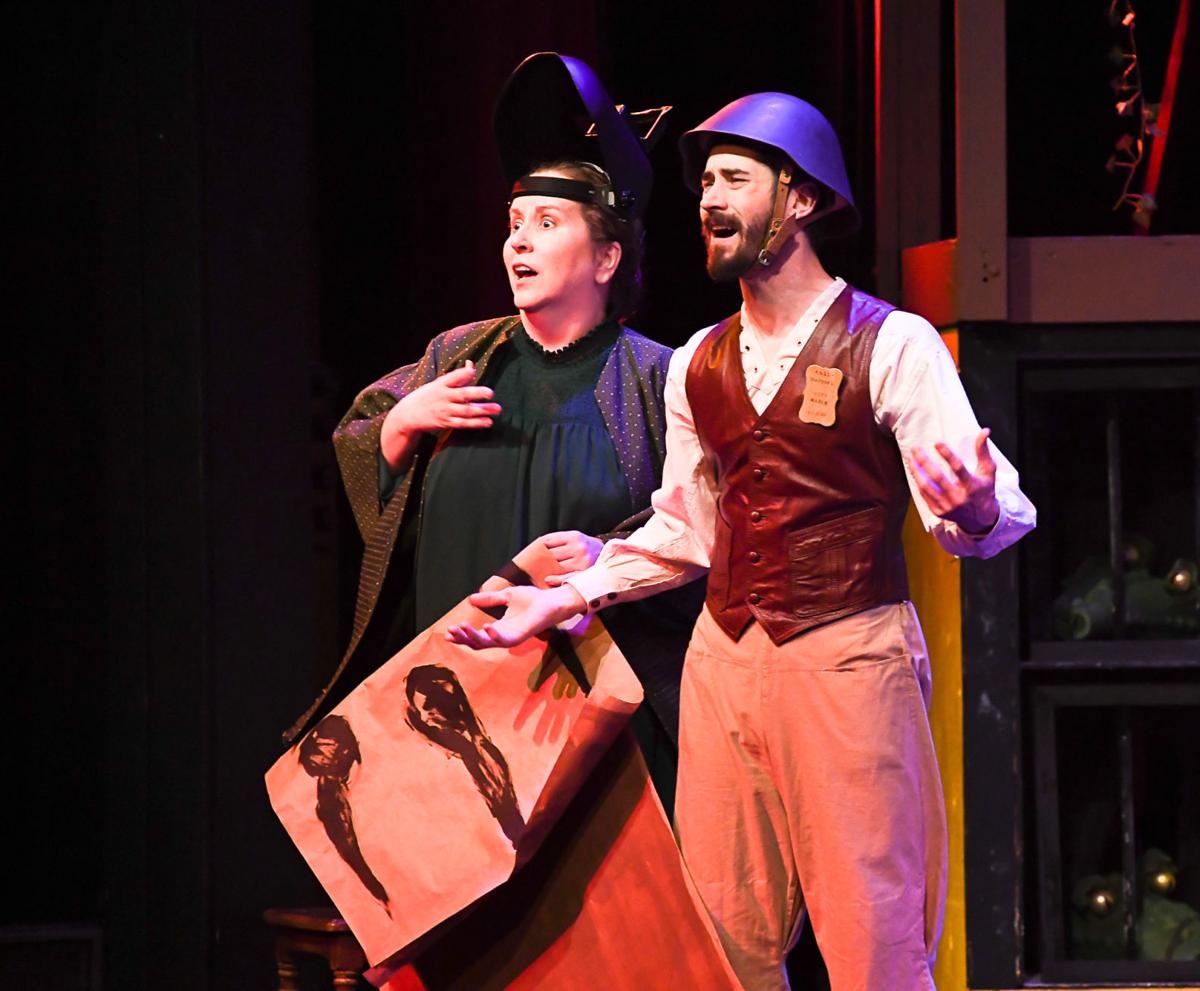 Lady Ramkin (Nancy Homan), left, and Captain Vimes (Anthony McMahon) get their first glimpse of the dragon. (We'll have to wait.) 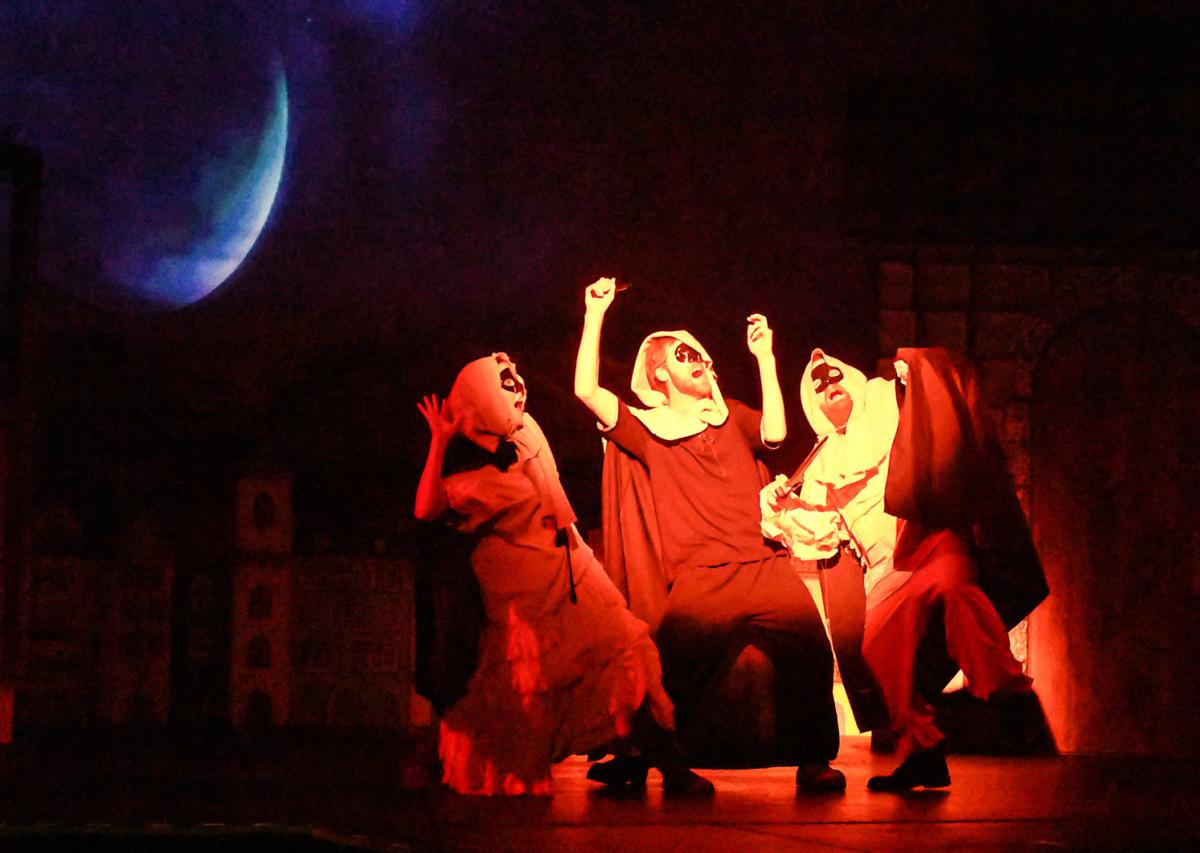 The dragon claims its first victims in "Guards! Guards!"

So the show is basically a cop drama.

Well, maybe more of a parody of a cop drama.

Oh, and that parody is set in a send-up of fantasy tropes.

And, of course, it has dragons.

Corvallis’ Majestic Theatre brings its production of Terry Pratchett’s “Guards! Guards!” to the stage Friday for a run that ends Feb. 9 (see info box for details). It's an adaptation of the novel of the same name by Pratchett, one of the most prolific writers in the comedy-fantasy genre. Both show and novel tell the story of a bumbling city guard trying to save the city of Ankh-Morpork, a frequent setting in Pratchett’s work, from a dragon.

Director John Carone has also directed previous local productions of Pratchett adaptations: “Wyrd Sisters” at the Albany Civic Theater in 2011 and "Mort!" at the Majestic in 2017. The three shows, he said, all set in the same world, are some of the best entry points into Pratchett’s works, since they each begin a series set in Ankh-Morpork.

“Pratchett is good at parodying many genres,” Carone said. “In this, he parodies cop dramas.”

The show’s main challenge, for Carone, was its medieval-style setting.

“I can’t just put people up there in jeans,” he said.

In addition to costuming a cast of 16, some of whom play multiple characters in different scenes, "Guards! Guards!" has an array of props that include a book so big it has to be strapped to someone’s back, a cart full of dragon-fighting weapons, and a small dragon puppet named Errol (although the larger dragon attacking the city will be represented with a combination of lighting and sound effects).

Carone added that unlike the minimalist set of “Mort!” this show's set is meant to portray Ankh-Morpork with a variety of locations and set pieces designed to depict multiple places. All should add up to something that appeals to audiences.

“I think everyone who comes to see it will love the jokes, love the story and have a really great time,” he said.

Dan Breysse, who plays Lance Constable Carrot Ironfoundersson, one of the show’s leads, was excited to land a part in "Guards! Guards!" because he’s been reading Pratchett for as long as he can remember.

“Terry Pratchett is amazing," he said. "I want to share that with people."

Breysee has been working to bring the innocent, goodhearted Carrot from Pratchett’s books to the stage.

Anthony McMahon, who plays the central role of Captain Sam Vimes, actually hadn’t read any Pratchett before the show. He said taking on such a character has been challenging because people familiar with the author's work have a lot of ideas about Vimes already.

“It felt like diving into the deep end,” he said.

However, he said he’s trying to bring authenticity to the role, spending time studying how people act and move while intoxicated, because Vimes is an alcoholic.

Homan added that the show's has a lot of elements to its spectacle, such as 300 sound cues, a huge variety of props, and even puppetry.

“There are so many moving parts, so many elements, it really is a 360 degree kind of experience,” she said. “Don’t blink or you’ll miss something.”

WHAT: Stage adaptation of the novel by comedy-fantasy legend Terry Pratchett

The late Terry Pratchett wrote more than 40 novels about the Discworld, a flat version of the Earth. He used the setting to parody real-world …

Lady Ramkin (played by Nancy Homan, left) is confronted by an angry mob bearing pitchforks and other terror-striking implements in a production of Terry Pratchett's "Guards! Guards!", opening Friday at the Majestic Theatre in Corvallis.

Magic is used to summon a dragon in Terry Pratchett's "Guards! Guards!," set to open Friday at the Majestic Theatre in Corvallis.

Lady Ramkin (Nancy Homan), left, and Captain Vimes (Anthony McMahon) get their first glimpse of the dragon. (We'll have to wait.)

The dragon claims its first victims in "Guards! Guards!"